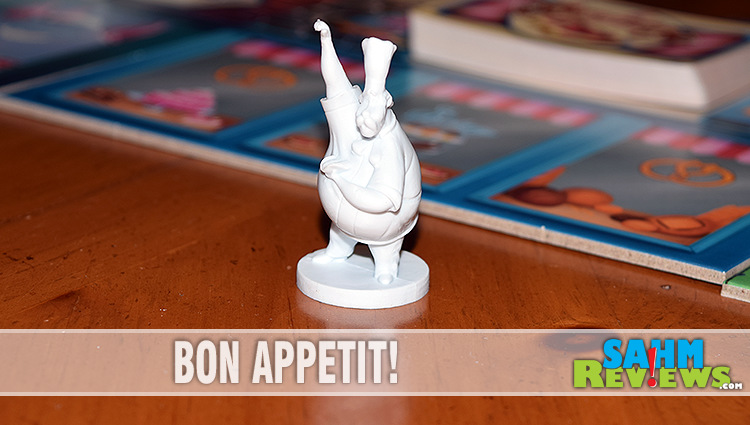 You know what time it is? Time for farmers’ markets! Every year I look forward to the opportunity to enjoy some fresh produce and meat direct from the farm. I’m always thrilled to try new foods and the market is definitely the place to do that. Vendors offer samples on the spot and on one occasion a farmer gave us Delicata Squash at no charge as long as we promised to prepare it and purchase from him the next week if we liked it. We enjoyed it and yes, we did purchase that and other items from their booth because that kind of service is worth rewarding. Unfortunately, sometimes we weren’t able to get what we wanted because we simply weren’t at the market early enough. Early bird catches the worm, right?

But the funny thing is… It’s no secret that I’m not the cook in the family. Scott does the majority of the food preparation. I’ll make something here and there, but my confidence level in the kitchen is nil. Unless we’re not talking about actually cooking in the kitchen! When it comes to games like Menu Masters from Calliope Games, I’m filled with assurance that I have what it takes to shop for the necessary ingredients to craft the perfect menu. 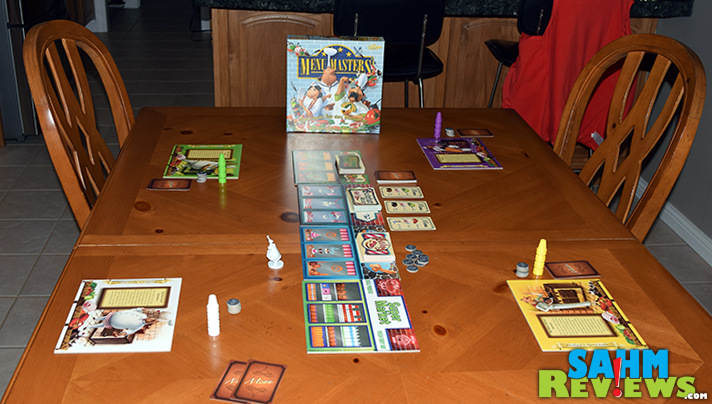 From watching movies, documentaries and reality shows, I’ve learned that many master chefs visit markets daily to gauge quality and availability of ingredients before determining the menu for the day. In-season fruits and vegetables are showcased because that’s when they are at their best. The same holds true in Menu Masters. Up to five individuals use their skills as chefs to purchase ingredients and prepare the highest quality menu. This is achieved by visiting the Produce Stand, Butcher Shop, Bakery and in some cases, the Supermarket and purchasing whatever is available so that you can execute your designated menu. Just remember… early bird… 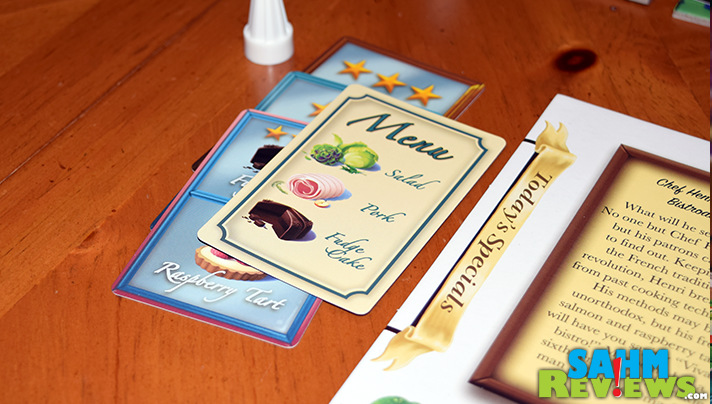 At the beginning of the game, each chef is given six coins and is provided two menu cards that they will be trying to fulfill with the highest quality ingredients they can afford. In addition to individual menus, there are 3 community menus that are on a first-come, first-filled basis. The game is over and scores tallied when one chef manages to present three completed menus. That’s simple enough. BUT… If you’ve ever eaten at a single-star restaurant, you understand that the star rating is significant in the restaurant world. Just because a player finishes their three menus first doesn’t mean they will win. Quality can trump quantity in the long run. More on that in a minute.

Each store and market stand is stocked with three available ingredients from a randomly shuffled inventory stack. Ingredients range in quality from two to four stars, but there’s a process to being able to get your hands on the ones you want. Not every ingredient is available each round so you’ll have to plan accordingly when you see something you need. Menu Masters is played over a series of rounds consisting of three steps each until one player completes the previously mentioned three menus. 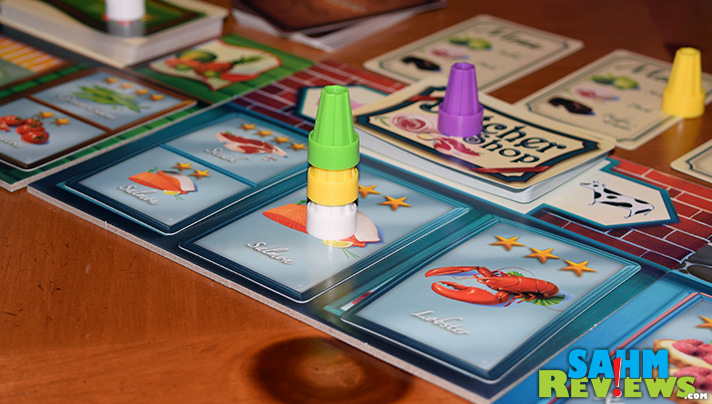 The first step is to place pawns. Starting with the first player and continuing one at a time, all players select an action until they have each utilized their four chef cap pawns. On their turn, chefs have a few options. They may choose to enter a store and get in line for the option to purchase their choice of ingredients. One line is formed with all additional pawns placed underneath the first. Two chefs may be interested in the same ingredient but they won’t know until the doors open and purchases begin. Please wait in line patiently until all players are at their selected destination. As an alternative, chefs can forgo shopping at a particular store and opt to own the store for the round. In this case, they’ll earn all the money spent on ingredients in that store on that round. As a third option, a chef can opt to send their action to the bank and collect one coin. After all actions have been designated, the round moves to the next step: Purchasing ingredients. 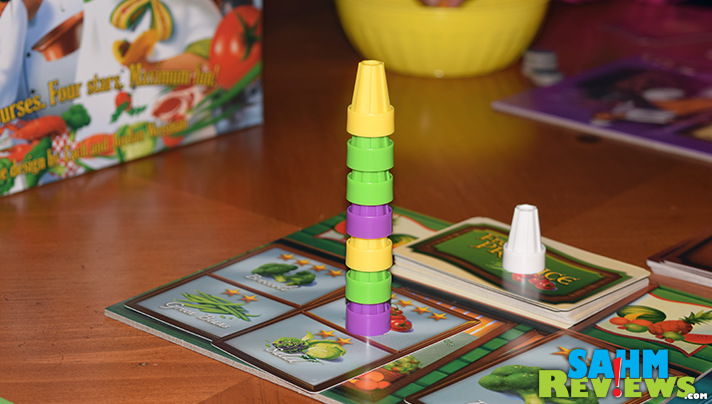 Starting with the Produce Stand, all orders are fulfilled at that location before moving on to the next. The player who is first in line has the first choice of the ingredients. There’s a catch though. Being first also means paying a premium. It’s simple supply and demand. A chef pays one coin per person in line. If there are four people in line (including the chef), the price for the ingredient of their choice is 4 coins. Maybe the ingredients are beyond the chef’s budget, maybe not. Once out of line, the next chef makes their selection based on the new price of 3 coins. The following chef would pay two coins. Chefs can get in line more than once – either to drive up the price or to have the option of additional selections. All coins paid are placed on the storefront to be collected by the store owner during the cleanup step. This same process happens for each store which means by the time chefs reach the bakery or supermarket, they may be out of money! Some ingredient cards show two possible options but only one may be used. In addition, 2 of the same ingredient may be considered a Power Food and serve as a substitute for any other ingredient from that same store. 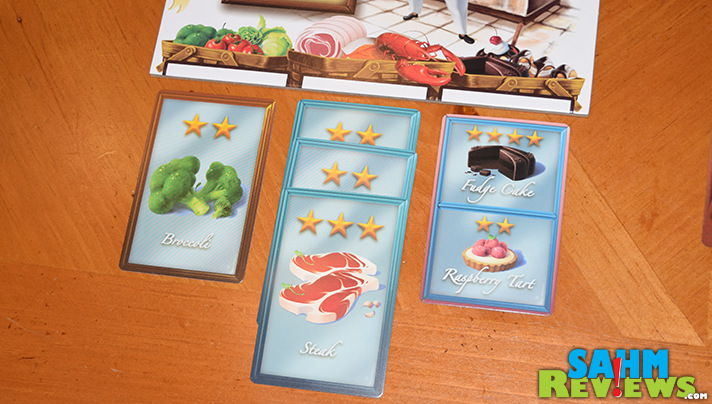 Chefs may hold up to six ingredients in their baskets, but must either create a menu or discard a prior ingredient as soon as they purchase a 7th. At any point during their turn, a chef can announce the completion of one of their menus or claim one of the community menus. To do so, they announce their intention then match their Menu card with the ingredients from their basket. If they completed one of the community menus, it is replaced with a new one. Once purchases have been made at all locations and bank withdrawals made, the round moves to the cleanup stage. At this time, all chef pawns are returned and store owners collect their earnings. Any stores without a chef owner are controlled by the bank. All the ingredients are restocked from the store deck and the First Chef token is passed clockwise to the next player. If a chef hasn’t created three menus, the next round begins. 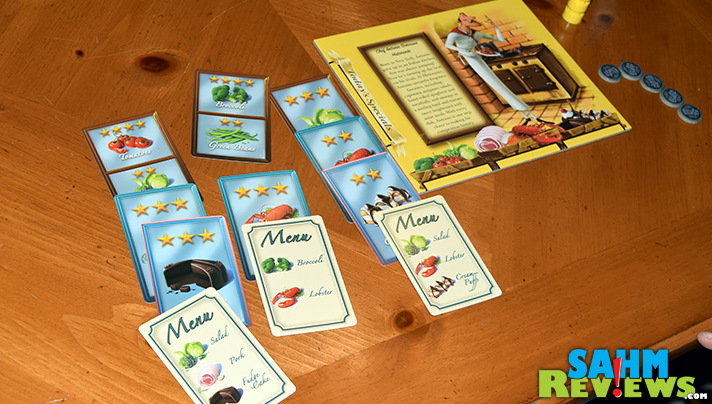 As I mentioned before, it isn’t about quantity. Once a player has announced their three menus, the scores are tallied at the end of that round. Stars for the ingredients on each menu determine its overall value. If a Power Food was used as a replacement, only one of the two ingredients is scored. The player with the most stars across their completed menus wins! Deliciouso!

Menu Masters is another in Calliope Games’ Titan series and can be purchased on Amazon for around $23 or direct from the Calliope Games website. You can learn more about this and other releases by visiting their website or following Calliope Games on Facebook or Twitter.

What is your favorite item to purchase at a farmer’s market?