Over the years of checking out new board games, we can typically predict what type of game will come from whom. ThinkFun is known for their single-player puzzle challenges. USAopoly has branded variations of classic titles. You can count on Cool Mini or Not to make something with amazing miniatures worth the retail price by themselves. I guess you could say we’ve pigeon-holed a number of publishers by their game types. If you’re good at what you’re doing, why not keep doing it?

One reason a company might consider changing things up is because they’re missing key game types in their library. Especially companies like Passport Game Studios who are well known for their medium and heavier games and also the classic Tokaido. Sure, they’ve dabble with lighter games like Quartz and Voodoo Mania, but there is at least one category missing from their catalog – a solid dexterity game! That’s where today’s feature, Hop!, fits in. 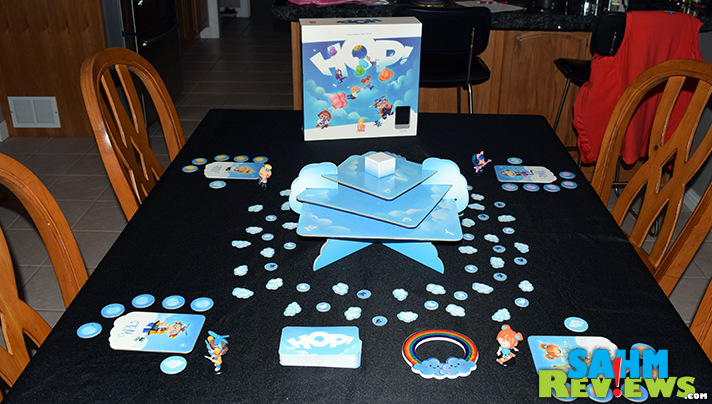 Unlike other dexterity games, Hop! is unique in that it is both a dexterity challenge and a board game at the same time. The first thing you’ll notice is the multi-level playing board. Yes, it must be assembled each time. No, it doesn’t take very long. In fact, it assembles in just a couple minutes and the included storage tray is perfectly designed to get it back into the original box. 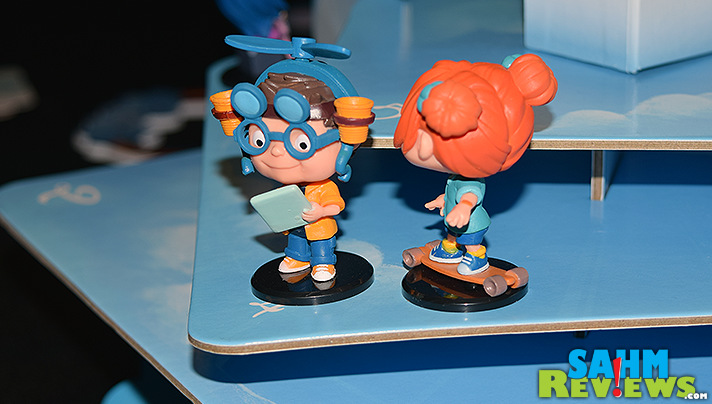 Then you’ll certainly marvel at the pre-painted miniatures included with Hop!. One for each of the (up to) six players, they each seems to have their own personality. Picking the right one is much harder than simply deciding whether to be the shoe, thimble or race car. 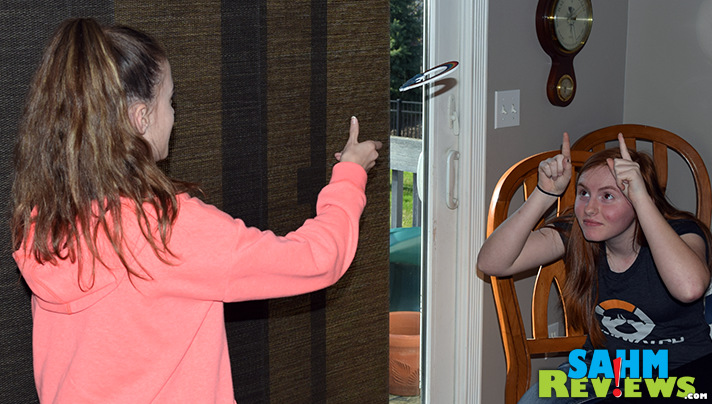 The basis of Hop! is to throw a ring and try to get it on someone else’s finger. Sounds simple, right? Not so fast. First, the hurler (the person throwing) must release the rainbow ring before it is over the table. The skewerer (the person catching) has to begin with their elbow on the table, finger pointed up. 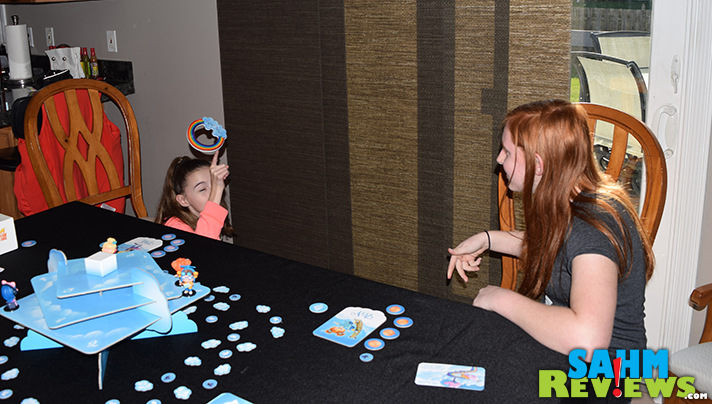 But don’t think that’s all there is to it. Hop! includes a full deck of cards with one drawn before each attempt. These introduce a wide variety of challenges to the throw, including adding an assistant (another player who is trying to help you success) and a turbulator (a player trying to prevent you from succeeding). 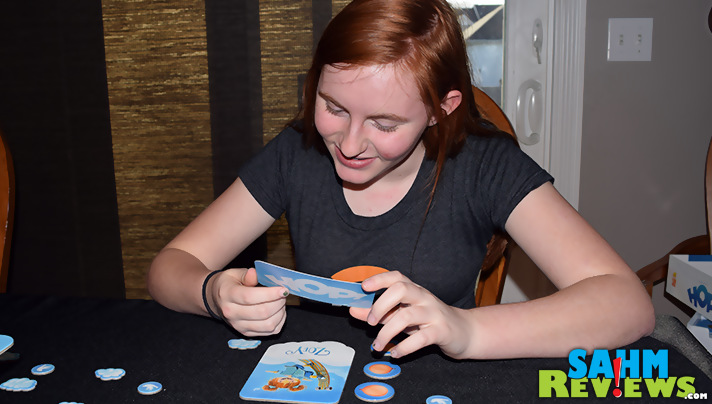 They can also change up the rules of the challenge. For example, one card has the skewerer putting their hand on their forehead, extending their finger out like a unicorn instead of placing it on the table. Now you must aim higher and try not to hit your opponent in the face! 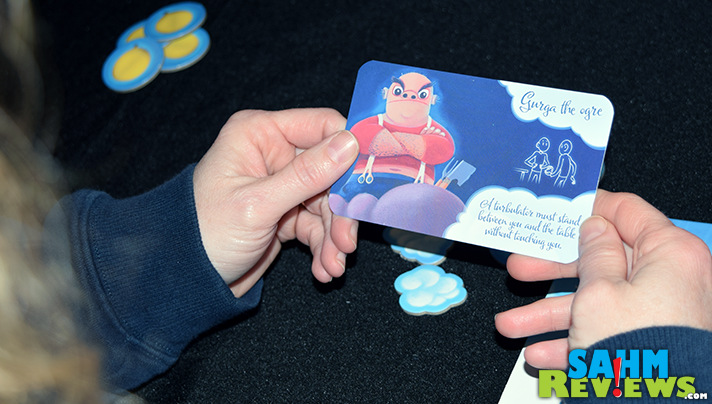 If the throw is successful, the hurler gets to move their figurine up one level on the game board. The skewerer gains a cloud token, as does any assistant. If your throw failed, you lose one of your five balloons (the skewerer and assistant don’t lose anything). The turbulator, if any, gains a cloud token from the table. 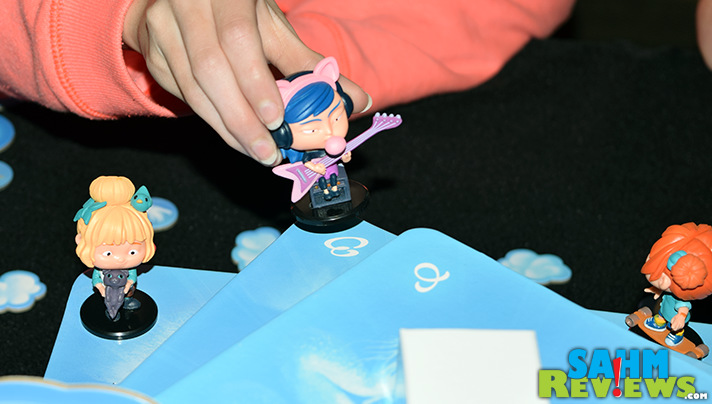 So no one is left out of any round, in Hop! there is a gambling aspect as well. Any person who is not involved in the actual throw as a hurler, skewerer, turbulator or assistant can bet on the outcome of the attempt. By placing their betting token either happy side up (betting on success) or unhappy side up (betting on a failure), they will win either a dove (correctly guessed) or a crow token (incorrect guess). These birds are traded in when a set of three are obtained. Three doves are exchanged for moving up a level on the game board, while three crows causes you to lose one of your balloons. 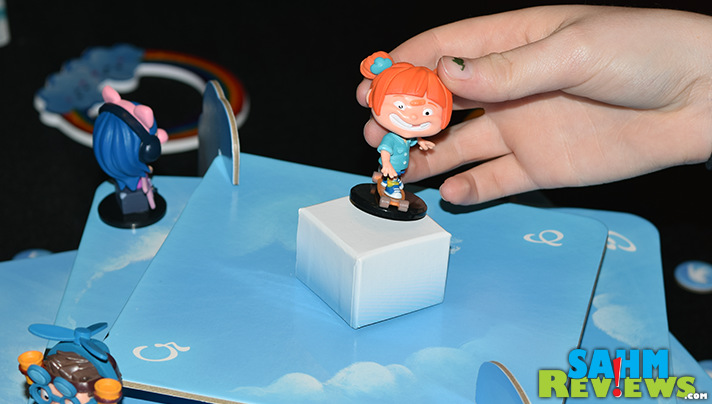 Players take turns at being the hurler until someone either reaches the top of the board (the 7th level) or loses their last balloon. You do not want to be the person that loses their last balloon – this causes you to fall off the board and will receive no points from your figurine. Each person then totals up the value of the level in which your figure is standing plus the total value of all the cloud tokens you received during the game. The player with the highest total wins Hop!.

Hop! is a little more expensive than your typical dexterity game, but as you can see by the quality of the components, the price is well-justified. Although it has a MSRP of $60, you can find copies on Amazon right now for a little more than 25% off! If Hop! is any indication of the quality of dexterity games to be issued by Passport Game Studios, we say “Bring them on!”. Be sure to check out their entire game catalog over on their website and watch their Facebook and Twitter feeds to find out what they’re currently working on. We’re especially excited to learn more about their upcoming steampunk-themed cooperative puzzle game, Professor Evil and the Citadel of Time! Hopefully we’ll be able to bring you a preview or two!

What is your favorite dexterity game?