Before the kids were born, Scott and I were the parents to 3 four-legged children: two American Eskimo dogs and a Chow. After years of infertility issues, we had accepted that they might be the only family we would have. We were eventually blessed with the two beautiful girls you regularly hear us brag about and with that came schedules that were hectic and attention that was divided.

Eventually, age caught up with our dogs and we had to say our goodbyes. As much as we would like to someday adopt a new dog, today is not the day. Our schedules would leave the dogs lacking the attention that any family member deserves. Yet a passion for pets isn’t something you just get over. Instead, we have to find ways to foster the love within the limits of our time and abilities. One way is to support the local animal shelters and provide donations and personal interaction with the animals awaiting their forever home.

Another way that we fill the void is by watching pet shows and movies whenever possible. The latest example, Puppy Dog Pals, is sure to win the heart of our youngest because the two main characters bear a striking resemblance to one of her favorite dog breeds. During an exclusive interview with executive-producer, Sean Coyle, I inquired why Pugs were used as the inspiration for the characters. He said, “Because Pugs are sort of naturally goofy looking in the cutest possible way.” Around here, we refer to that as pugly. But the show isn’t focused on their breed (or those of other characters) as much as it is about their activities, adventures and relationships. When asked later about other characters we can expect to see in future episodes, Coyle said “We make a point in our world of never refer to any of the dogs by breed. The only time we ever mention pug would be in the title of an episode. Like “Hawaii Pug-0” for example. So all the animals in this world, our main characters, they never refer to each other as a specific animal or as a specific breed, or as a specific anything. Everybody’s a friend or family.”

And there, in my opinion, is the primary reason Puppy Dog Pals is going to do so well with young kids and get the stamp of approval from parents. Nobody is labeled – a lesson that children today need to learn early and (hopefully) carry with them their entire lives.

I think I’m getting ahead of myself though so let me back up a bit and tell you about the show! 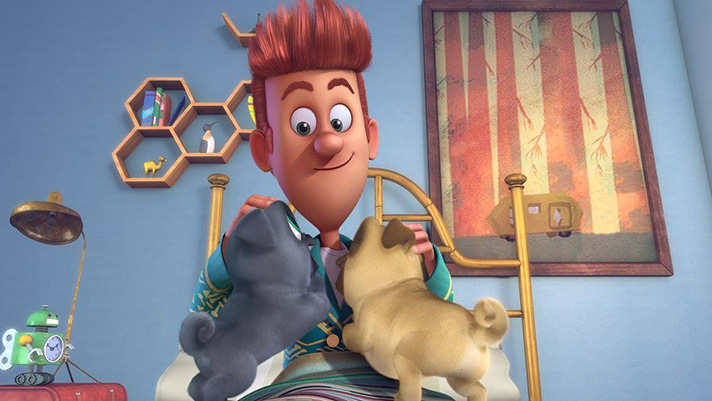 Siblings. They’re destined to create memories together. That’s what siblings do, right? Bingo and Rolly are two creative and adventurous puppies who live with their owner, Bob, an inventor who spends his days out of the home. They also have a four-legged feline big sister named Hissy who is cranky at times but loves her little brothers. (Isn’t that like the stereotypical definition of a sister?) We’re also introduced to A.R.F. (Autodog Robotic Friend) who was created by Bob to help meet Bingo and Rolly’s needs while he is away. Throughout the season, additional characters will be introduced including a junkyard dog (pitbull) who acts like the neighborhood big brother. Back to the discussion about future characters, Coyle mentioned, “We have a guinea pig in a pet store window that is a source of information ’cause he hangs out right in the middle of Main Street. And he sort of sees and hears everything.” Characters will be sprinkled into shows randomly then return in future episodes.

When my girls were little, whether or not they were allowed to watch a show was 100% contingent on whether I could stand being in the room when it was on, how tolerant I would be hearing them repeat lines and songs from it and if I felt the story justified the time spent. First and foremost, I had to be able to watch it with them if I wanted to. Seriously, some shows are impossible. When Coyle and comedian Harland Williams created the show, they designed it with the story as a priority, written in a way that it was meaningful but not dumbed down. Sean Coyle shared his personal experience, “We’re aiming for two to five, as sort of the sweet spot. I’m a parent of two little kids, and I’m very picky with what they watch because it has to be something that I don’t mind spending time with either. And so that was really a focus for myself and a lot of the crew members too. The writers, the directors, the designers just want to create something that kids would love but also something that people two to 80 could also enjoy spending 25 minutes with.”

Each airing includes two 11 minute episodes back-to-back containing not only an adventure or activity but also some type of musical tune. The adventures are spurred by something that Bob says or they hear on the news. As an example, in one episode they head to Hawaii to collect sand while in another they look for a missing masterpiece and decide to search the greatest wall in the world which happens to be in China. “A lot of these episodes we definitely try to play out four-year-old detective skills and how four year old kids would sort of piece together a puzzle or a mystery.” While Puppy Dog Pals isn’t designed as a musical show, each episode will contain their signature theme tune in addition to one unique song from songwriter Andy Bean. You might not recognize the name yet, but I hear he’s going places so you’ll be able to say you knew him when…

The show provides several opportunities to teach children about different parts of the world. When I inquired if there were plans for the website to host informational pages about Hawaii, China, Italy and the other places they visit or integrated into an app so children can delve more into these places and cultures, I was told it was a great idea that they’ll be looking into. Let’s cross our fingers! In the meantime you can do various Puppy Dog Pals coloring pages, mazes and decoder activities.

“Puppy Dog Pals,” debuts tomorrow (that’s Friday, April 14) at 10:30 a.m. ET/PT with two back-to-back episodes on Disney Channel. The premiere episode will also become available that day on the Disney Junior app and Disney Junior YouTube page. The entire first season consists of 25 shows containing two 11-minute episodes each for a total of 50 stories spanning the globe and addressing homegrown matters at the park, at the theater, in the neighborhood and at home. Visit Disney Junior on Facebook and Twitter for more Puppy Dog Pals updates.

What city or country would you like to see Bingo and Rolly explore?