Home / Recreation / TV/Video / What We’re Watching: The Shrink Next Door on AppleTV+ 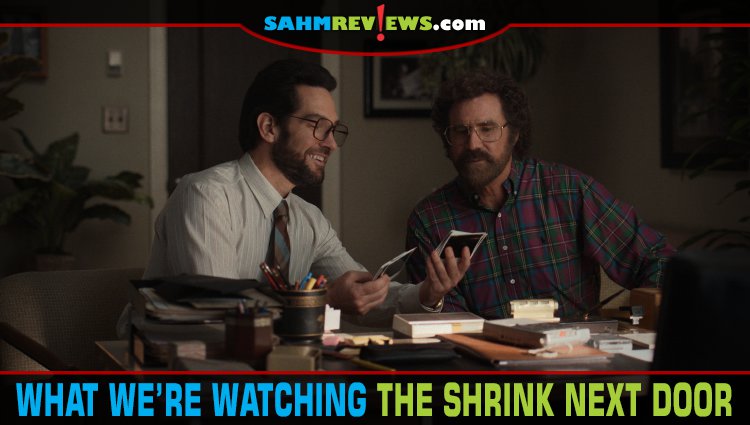 To say I get emotionally invested in TV show and movie characters would be an understatement. I cheer along with Ted Lasso, get jitters for Squid Game contestants and cry when a favorite Marvel character dies. But until now, I cannot think of a TV show that has riled so much anger and resentment as The Shrink Next Door on AppleTV+. Each day Scott would ask if I was in the mood to watch a show that would make me mad. That is how I felt during every episode. My answer was almost always, “yes” because I needed to hear the rest of the story.

After the loss of both his parents and resulting family business issues, Marty was encouraged to seek a professional to help him deal with the anxiety. It was through a referral that he arrived in the office of Dr. Ike. What should or could have been a short series of appointments became a multi-decade relationship that cost Marty financially as well as emotionally.

Despite how the show made me feel, it’s one I will regularly recommend people add to their streaming list. It stars Paul Rudd as Dr. Ike Herschkopf and Will Ferrell as his patient, Marty Markowitz. You won’t find any familiarity to the signature styles of roles you usually enjoy from this talented duo. No off-the-cuff jokes, silly antics or comedic banter. I spent most of my time seeing the characters and not the actors who portrayed them. Maybe that’s why The Shrink Next Door sucked me in or perhaps it is because it was based on actual events as chronicled by the podcast of the same name.

If you haven’t heard the podcast yet or read any articles, don’t. Watching the show without preconceived notions made a big difference in our experience. It made all the interactions and results even more jaw-dropping. It’s about how Dr. Ike takes over Marty’s life, benefiting from Marty’s inability to be assertive in his decisions. It’s not so much the story of a con man and his mark as it is about an unorthodox doctor/patient relationship. You can stream The Shrink Next Door on AppleTV+ but go into it knowing that Marty doesn’t get the best end of the deal and you’ll likely find your blood boiling.

How do you feel about docudramas that elicit such major emotions?