There are two things you’ll seldom see me write about here or on social media: politics and religion. I have very definitive stances regarding both of these, but I am also very careful not to impress my ideals upon other people. At the same time, I don’t believe our beliefs should limit us from learning more about history and the world around us. They especially shouldn’t keep us from enjoying entertainment sources such as movies, TV shows and games that may include such a theme. For example, you may not support the idea of war or crime, but that shouldn’t prevent you from playing a game like The Mansky Caper where you’re pretending to be gangsters or a 4X game like Exodus where you’re attacking other civilizations. Likewise, it should prevent you from enjoying something like Liberty: The American Revolution from Columbia Games or any number of the historically-based games from Academy Games. There’s more to these titles than entertainment; they also provide some background on history. As I said in my overview of The Towers of Arkhanos, the theme is only a portion of the equation when deciding whether to play a particular game.

Games based on the bible are no different. You can play the game and ignore the overlaying theme and flavor text or you can be mindful of those things and learn something in the process! That’s the case with Wisdom of Solomon and Kings of Israel from Funhill Games and Animo Living Deck Bible Verse Game from Animo Games. I’ll offer an overview of each of these games so you can see how there’s more to the game than just the biblical theme.

How much do you learn about the kings of Ancient Israel during history class? As I’ve said many many many times before, I found history boring when I was in school and retained very little. If I HAD actually been taught, I clearly didn’t remember any of it. Kings of Israel board game uses a Pandemic-like mechanism to teach about many of the good and evil kings who ruled from around 1050 BC. 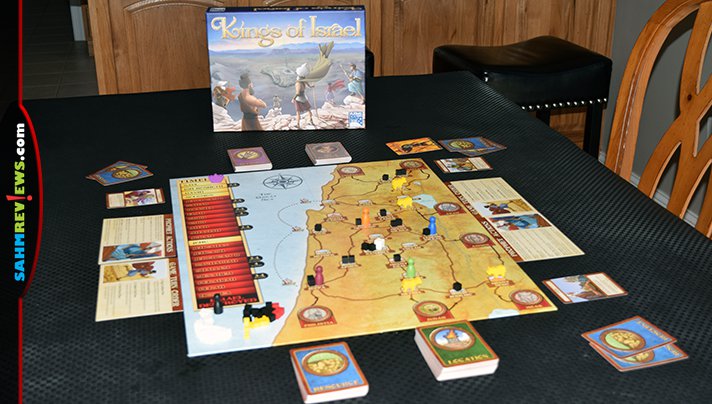 The object of the game is to survive the spread of evil and worshiping of false idols throughout the land of Israel. Each round represents the reign of another king and you’ll have a limited number of actions to traverse the map and keep the land in order. You can win by successfully spreading the good word by placing a designated number of Altars or lose by placing all the Sin Cubes or Idols. The board is randomly populated with some Sin Cubes and one single Altar (white token) in Samaria. Players will begin with a special ability as well as two Resource Cards. 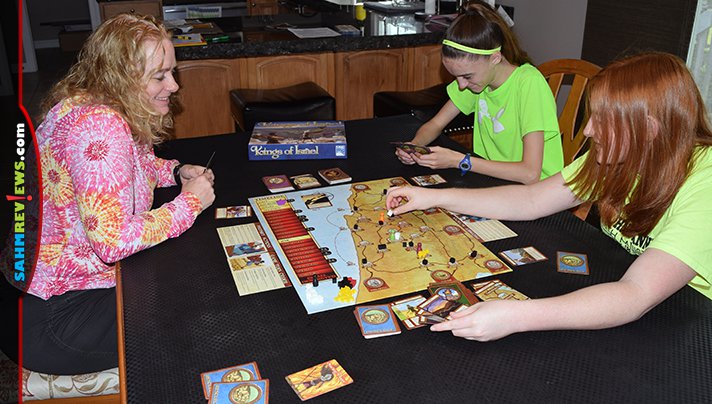 The number of rounds varies based on the number of players. You’ll begin by drawing a Blessing Card during the reign of a good king or a Sin & Punishment Card during that of a bad king. Sin then has the opportunity to spread in a similar fashion to any Pandemic game. After all that chaos, each Prophet has four actions to undo to the evil! You can move, preach, destroy idols, acquire resources, build altars, make sacrifices or give resources. 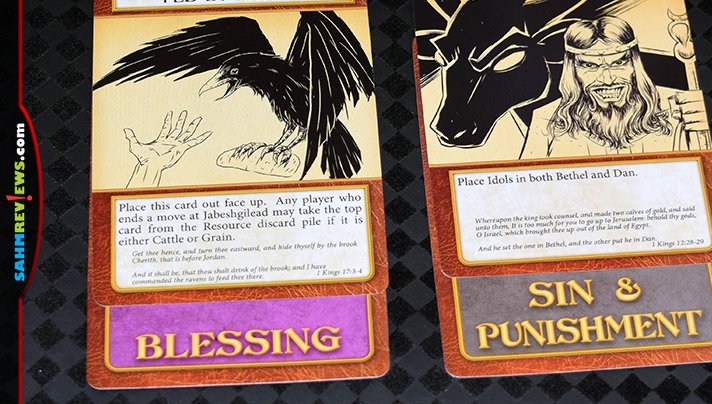 As I’ve pointed out, the game is just a game. You can make it what you want. Play it in the same fashion you would any other game or pay attention to the flavor text on the cards to learn about the various bible verses that inspired the cards. You can find Copies of Kings of Israel board game on Amazon.

As you learned in school (or by playing Kings of Israel), Solomon was one of the many rulers of ancient Israel. While you were working to prevent the spread of evil in the prior game, in Wisdom of Solomon, the focus is on spreading Solomon’s influence across the kingdom, expanding the borders by building roads and fortresses, creating a merchant system and building the Temple of Jerusalem. 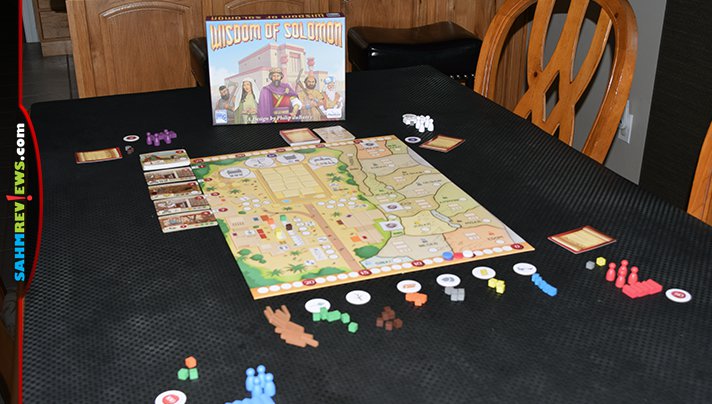 While Kings of Israel was a cooperative game, Wisdom of Solomon is competitive. The game takes place over a series of years with each player striving to be the player who earns the most Favor from the king. Two resources cubes are added to each resource type in the market with the remainder of the resources sorted by type and placed in a general supply. Temple tiles are randomly placed on the board face down then building cards are shuffled and placed alongside the board. Five Building Cards are flipped and placed in their designated spots on the board. Players select a player color and will also begin with a Fortune Card. 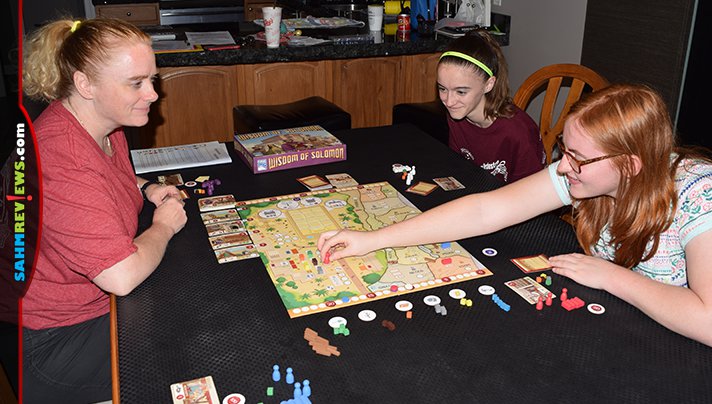 Wisdom of Solomon is a worker placement game with each player taking turns placing their workers on a variety of places on the board. The game continues until one player has placed all their Customs Houses on the map or the construction of Solomon’s Temple has been completed. You can buy and sell at the market, trade resources, build part of the temple, construct a building, explore the land or take bonuses at The Holy Place. 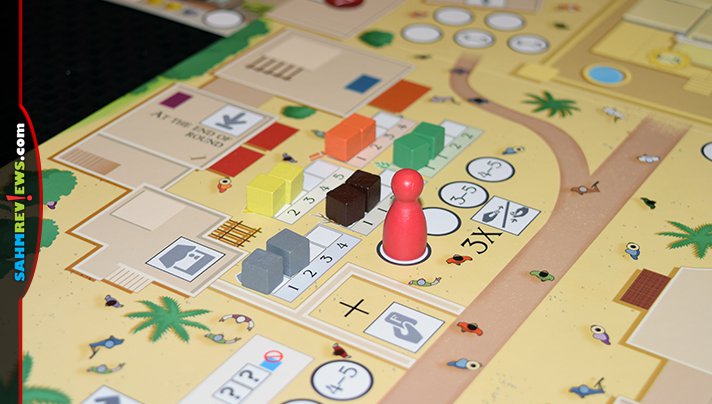 As with Kings of Israel, cards have text referencing the part of the bible that influenced the action. This type of text is common in a lot of games and it’s entirely up to you how much time you spend reading and referencing it. It doesn’t have an impact on the play of the game. In and of itself, Wisdom of Solomon is an approachable worker placement game regardless of your religious beliefs. You can find copies on Amazon as well as direct from Funhill Games.

We’ve featured several card games here including different types like battle-style, trick-taking, speed and memory games. Most include just one game in the box, but there are some that use the same deck for multiple mini-games. That’s what you’ll find with Animo Living Deck Bible Verse Game. 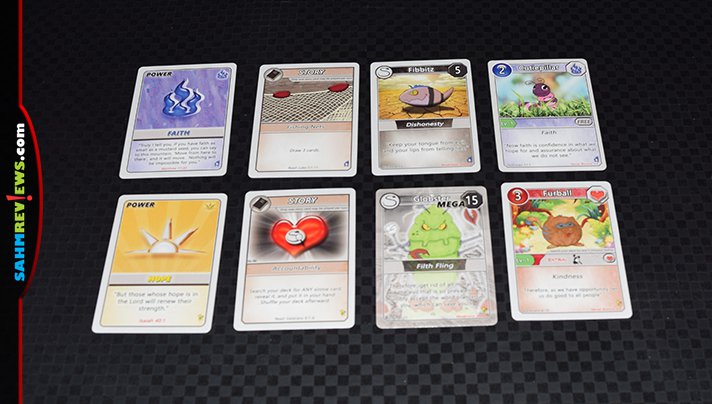 The game’s design is fashioned like traditional a battle card game such as Hero Realms with names, details and values. However, instead of fictitious characters, these cards feature powers such as hope, prayer and courage along with characteristics of kindness, love, humility, temptation and grief. Cards also reflect a related bible verse to give more meaning to each one while playing one of the mini-games. 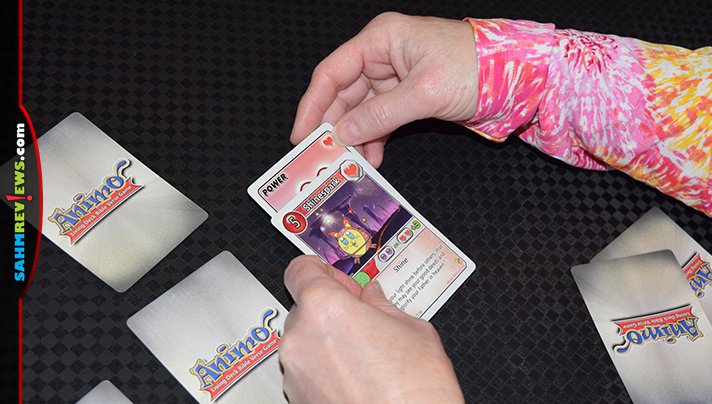 I’ll give you a brief idea of how the mini-games work. In Hide it in Your Heart, each player begins with a personal tableau filled with five face-down cards. The goal is to have the most points when all the exterior cards are revealed. On your turn, you’ll draw cards from the reserve and swap them out with the ones in your tableau, leaving the new card face up. You also have the option to use positive characteristics to power-up those cards and give them more value. Once someone has all but their center card revealed, one final round takes place. The game is very simple which gives players the opportunity to read the text and give thought to how injecting positive actions and thoughts into this world is a very powerful ability. 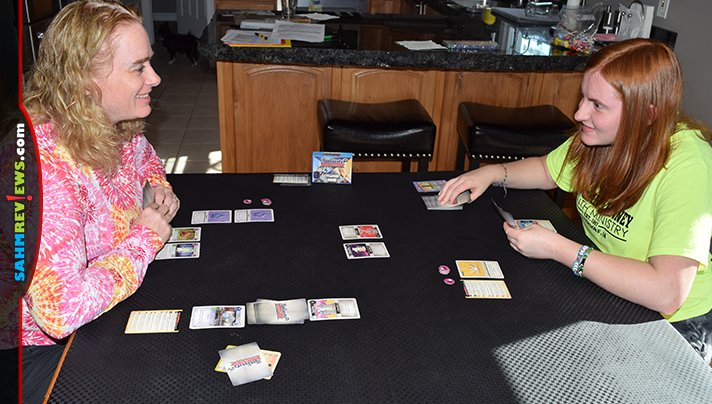 As an alternative, you can use two Animo Starter Decks or separate one deck into two “army” types and have a battle! Instead of positive and negative characters and equipment as is common in most battle games, in Animo you are battling sin with virtue. The first person to score the designated number of points or is able to knock out a specified number of their opponent’s sins wins. Animo Starter Decks are available on Amazon or direct from Animo and are a non-intimidating way to introduce card battle games to younger players.

As you can see from all three of these titles, they’re games first with a secondary educational element. You can incorporate the biblical references into the game as a talking point or bring the game along to a youth group or church retreat to offer alternatives to traditional religious learning. No matter how you use these, they’re a good option to add diversity to your game night. You can learn more about Wisdom of Solomon and Kings of Israel on Funhill Games’ website. Likewise, learn more about Animo by visiting their website. Of course, if you’re the type to indulge in social media, follow them on Facebook (here and here) and Twitter (here and here).

Are you likely to read the flavor text and look up the verses in the bible?

2 thoughts on “Card and Board Games Based on the Bible”