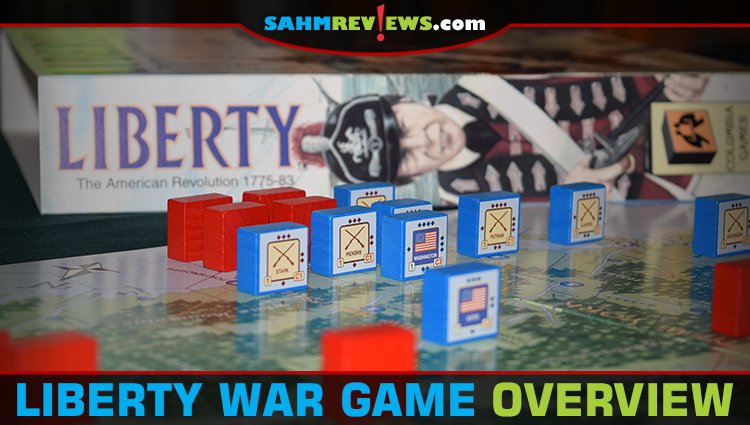 Tomorrow we celebrate our nation’s 243rd birthday as we gather for Independence Day. No matter your position on today’s state of affairs, most would agree that we are fortunate to have been born an American citizen or became naturalized after successful immigration. Understanding where we came from and the sacrifices made in that endeavor is a critical part of what makes us great.

A few years ago we were very excited to find a board game about the Revolutionary War that was entry-level enough that most children could learn to play and enjoy. 1775 by Academy Games simulated the original rebellion that occurred and the gathering of forces by both sides. There is even a valuable teacher’s lesson plan available so it can easily be adopted into a homeschool or classroom curriculum!

Alas, our daughters have grown and are after more engaging and historically-accurate games. That’s when we started looking into the line of titles by Columbia Games after remembering how much we enjoyed The Last Spike. While that one wasn’t revolutionary (pun intended) in its depiction of the construction of the transcontinental railroad, we knew that Columbia had a whole line of historical games that were much more approachable than the ones dad used to play with his war buddies. We thought we’d start by trying out Liberty: The American Revolution Game 1775-83. 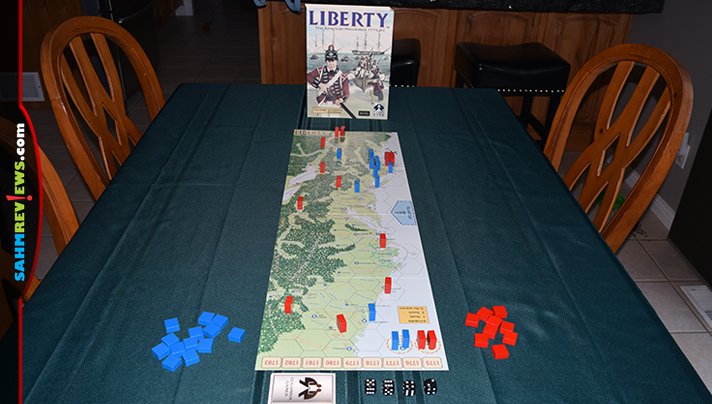 Just as in The Last Spike, Liberty uses stickered wooden blocks as player pieces. We are quite fond with this choice as they are easy to pick up, don’t tip over easily when on the board and do a good job of hiding your stats from your opponent. The only complaint is that some of us (cough, cough) have difficulty reading the stickers without reading glasses! But that’s more about us than the game’s design!

Blocks have numbers and symbols on them to define the army’s abilities. Strength is listed at the top, denoting the number of dice that will be rolled during combat. The Combat Rating (a letter and number) determines when the block fires (alphabetical order) and the maximum number needed on a roll to score a hit. A Movement Rating is also listed and represents the maximum distance one can move on a turn. There are also numerous types of blocks depending on their rank or faction. Leaders, Footmen, Dragoons, Warships and Indians all have custom iconography and are rooted in historical fact.

Similar to 1775, in Liberty, one player will command the American forces and their French allies, while the other represents the British armies. The goal is to gain control of enough territories to cause the other side to give up and sign a peace treaty. A game of Liberty is played over a series of years (1775-83), with each year broken up into five turns of four phases each. Each year is ended in the winter where forces on both sides will suffer attrition due to the weather, just as in the Revolutionary War. 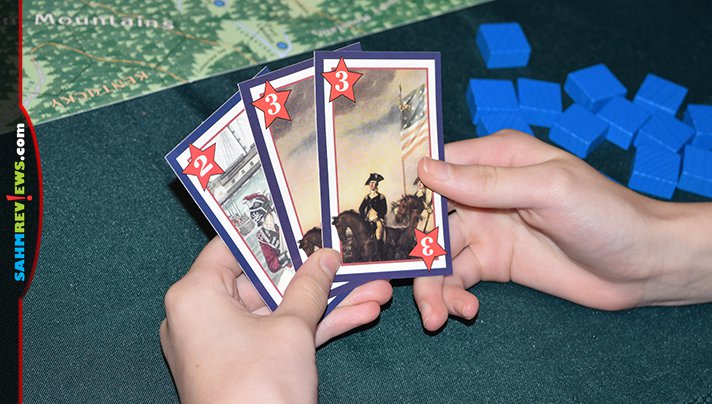 Both players begin each year with five cards (three in the first year). At the beginning of each turn, both sides will choose a card and lay it face-down in front of them. They are revealed at the same time and will determine both turn order and the number of actions each side may take on that turn. But before the actions take place, the person who is going second rolls the weather die to determine if any effects apply for this turn. These might prevent attacks within or from either the North or South or luckily have no effect at all. 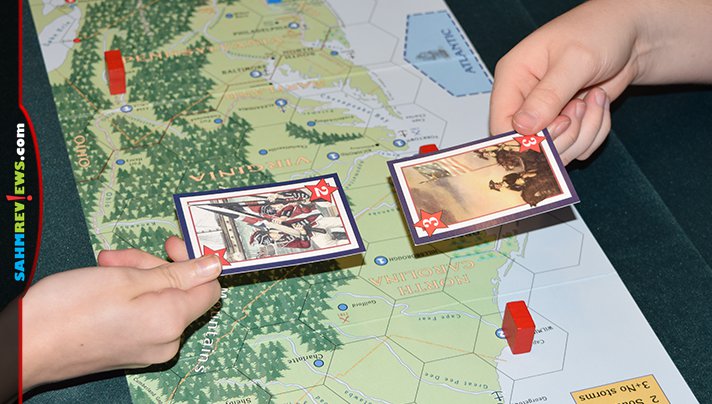 In turn order players then take their listed number of actions, which include either moving a piece already on the board or building a replacement block. All moves must occur before building to prevent a side from establishing a new block and moving it on the same turn. Blocks can move singly or as a group if they are on the same hex space. Terrain will limit the number of forces that may be moved together and might be bolstered by the existence of a river running through the area. 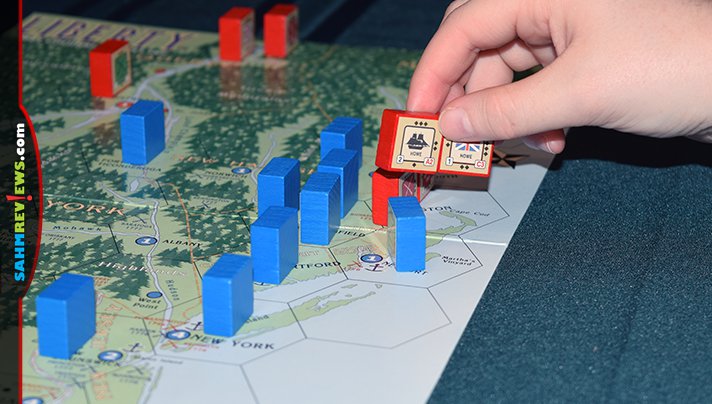 Battles are fought after all movement is completed and are resolved one at a time (the starting player decides). Each battle may last up to three rounds, and if not concluded by then, the attacker must retreat. Each side rolls as many dice as their block’s current strength in order of their Combat Ratings and damage is applied to the strongest enemy block in the battle. At any time instead of fighting, a block may retreat into friendly or neutral adjacent areas instead of attacking. 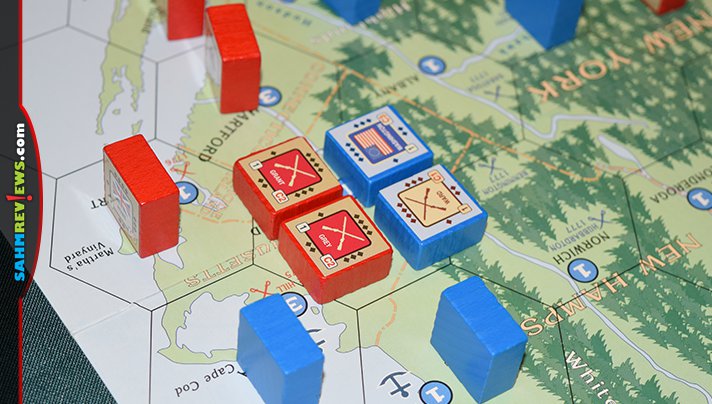 Not only are there land battles to resolve, Liberty: The American Revolution includes Naval battles via warships. These move two hexes as a time and end their movement in a port. They can attack land units if in the same hex or other warships if present!

Starting at the end of 1776 (the second year in the game), if neither player has won and the French have not yet entered the war, the player controlling the American forces rolls two dice and triggers the French Entry with a result of 8 or more. The French blocks are deployed in the Atlantic box, signalling their arrival via the Atlantic ocean. Three blocks representing the Cherokee, Mohawk and Shawnee warriors are available to the British forces and have a few rules restrictions and alterations depending upon their location (their Combat Rating increases if fighting in their own town, as an example). 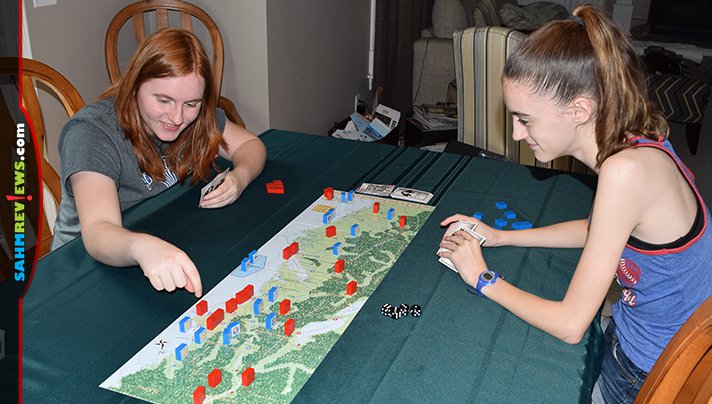 At the end of the year, after checking for French Entry, blocks that exceed the Supply Limit of the hex they occupy are eliminated. Each city has a number printed on the board to show how many blocks may rest there for the winter. If next to a port, armies may be disbanded (instead of dying), but if caught in the wilderness, those forces will be lost to the cold.

At the end of any year, if the British controls 30 or more Supply Points, that player wins. If they control less than 12, the American forces have won! Additionally, if the game lasts all the way through 1783 without a British victory, the Americans also earn their independence! There are many more options available in Liberty, such as Shore Bombardment, Prisoner Exchanges, special West Indies restrictions and Sea Attacks that make the game very realistic and helps one to realize the almost insurmountable odds we faced fighting for our freedom.

A wonderful introduction to more difficult war games and still rooted in accurate history, you can find Liberty on Amazon, direct from Columbia Games on their website or at game conventions where Columbia Games are in attendance! Follow their Twitter and Facebook feeds to find out where they’ll be and sign up for some of the special events they’ll be running!

What’s the most historically-accurate game you’ve ever played?

One comment on “Liberty: The American Revolution Game Overview”