Our involvement in the board game industry has allowed us to experience more games than the average person. We’ve discovered what we like most and what are least on our priority list. We understand what works and what doesn’t. One thing that is very apparent is that games are often built around an idea or game mechanic and the theme is added afterwards. Because of this awareness, we often don’t let the theme itself impact whether we’re willing to try out a game. Yes, a theme can be a draw – like Marvel-themed games, games about art or even games with a coffee theme. But for me, the type of game is what is likely to be the reason it gets to the game table more often.

Take for example, IDW Games‘ The Towers of Arkhanos where the concept of the game revolves around magic. We’re not strangers to games with this particular theme. Dragonsgate College is a game about going to college to become a wizard. Jonathan Strange and Mr. Norrell board game is based on the best-selling novel about magic. And we can build magical treehouses whenever we like in the game of the same name. That’s just the tip of a very large magical iceberg. So it isn’t the theme that drove me to want to play this. It’s the fact it has dice. I’m a sucker for a good dice game and even more when it’s a unique way to incorporate them as The Towers of Arkhanos does. It’s all about stacking dice to create towers! 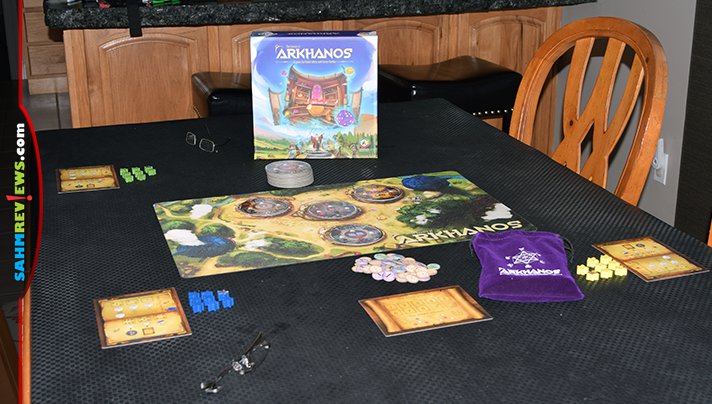 To begin the game, each player selects a color and takes the corresponding spellbook and meeples in that color. Find the four starting floor tiles (marked with pink and hexagon shapes with stars). Place three A-side facing up in the center of the table to form a triangle. The fourth will go in the middle of the triangle with B-side facing up. Shuffle all the remaining tiles to create a draw pile with the Side A showing. Add all the dice to the bag, form a community pile of prestige tokens and set the Mana Pool / Magic Council board alongside the play area. If you have the playmat (sold separately), you’ll be able to see the placement of the outer vs inner towers. 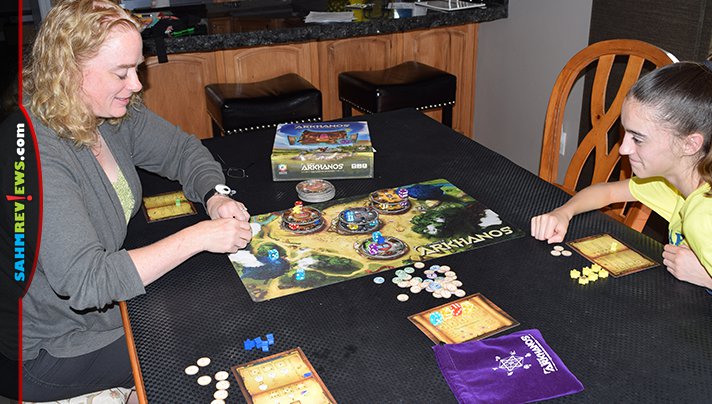 The goal is to work together to build arcane towers, thus channeling powers from past civilizations and adding those abilities to your spellbook. But this is far from cooperative. Each magician is trying to earn the most prestige which is done by having the most influence each time a floor of the tower is completed.

As I mentioned during setup, the tiles are two sided. Side A shows the dice and color information in the center along with three pillars that illustrate the various bonuses. These represent the limited options to use for placing a pillar on the tile. Side B is more basic, allowing any color can be used for its pillars.

The game consists of 8 rounds in 2 and 4 player games and 9 in a 3 player game. At the beginning of the round, the first player randomly draws dice from the bag and rolls them. Similar to the drafting process in Sagrada, these are your only options. On your turn, select one of the available dice to place as a pillar according to the limitations noted on the floor. 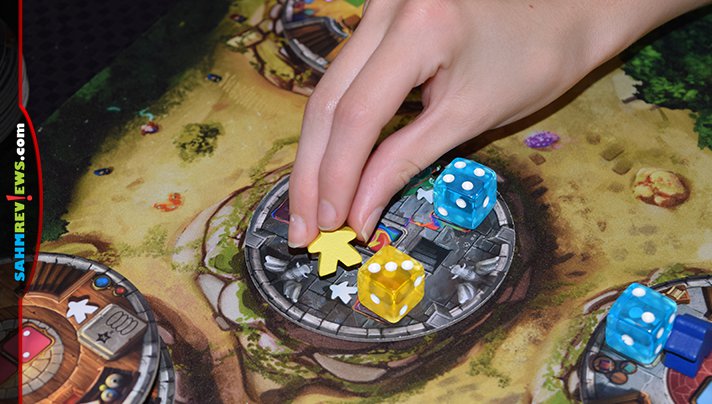 You cannot place a die without having a meeple to accompany it.  When adding a die to the tower, you’ll take the bonus action associated with the pillar location. Some bonuses give you a flat number of victory points or points based on their floor level. 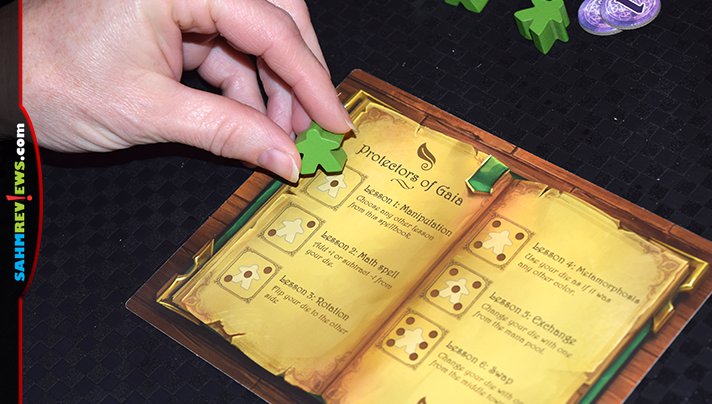 Other bonuses allow you to place a meeple (without a die) onto another tower or into your spellbook. Placing in your spellbook is like activating a spell. You’ll be able to remove the meeple from the book during a future turn to take the related action which will allow you to manipulate the dice values or colors. Since dice are randomly drawn AND randomly rolled, they don’t always match the available slots on the outside towers. In these situations, you may select one to place on the inner tower (the one with the generic side B showing). When you do this, you’ll add a meeple to your spellbook in the spot that corresponds to the value of the pips on the die. 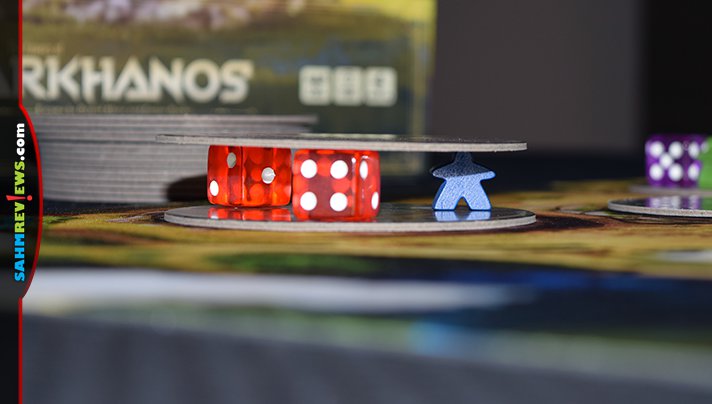 When all pillar spots are filled, the floor is complete. Players score the floor based on who has the most influence there with each Apprentice meeple on the floor counting as 1 influence and each Master meeple carrying a value of 2. Prestige (victory) points vary for inner vs outer towers as well as whether there was a clear winner or a tie. Meeples that were assigned to a pillar die are returned to each player’s personal supply for future work. A tile is then removed from the draw pile and added to the top of the tower to begin a new floor. Any meeples placed as a pillar itself (without a die) will remain. While they helped you earn more influence on that floor, they are destined to forever hold up the foundation of that tower.

The starting player for each round rotates clockwise so after 8 (or 9) rounds, each player will have had equal opportunities to be the first player. At the end of all rounds, incomplete towers are awarded prorated prestige points. Meeples in the spellbook also earn prestige points. After all that, the player with the most points is the winner of The Towers of Arkhanos.

While you can see that the magic theme does play some part in the game, it’s really about harnessing the proper construction materials (dice) to build towers. It’s a creative use of dice in an area control setting. The Towers of Arkhanos is easy to learn and we think it’s definitely playable by gamers well below the 14 year old recommendation. You can conjure a copy of The Towers of Arkhanos on Amazon or from your local game retailer. Build some ideas of what IDW Games has to offer by visiting their website or Facebook and Twitter channels!

Which is more important to you when selecting what to play: the game itself or the theme?