The topic of conversation as of late around our household has been about colleges. With our oldest beginning her junior year next autumn, she’s been instructed by the school counselors to begin tailoring her high school curriculum to match her college aspirations. I don’t recall having to make heavy decisions about future careers when I was only a sophomore, but I guess things are even more competitive than they were in the 80’s. She’ll be enrolling in elective courses that will help her in the couple of careers she is considering and also turn her into a well-rounded adult. That’s the plan at least.

It’s too bad deciding on a specialty wasn’t as easy as it is in board games. We’ve been playing Dragonsgate College by NSKN Games lately and there are only three choices! Student can choose to learn to become a wizard, a rogue or a warrior! And it is a LOT cheaper than 4+ years at a Big Ten school! 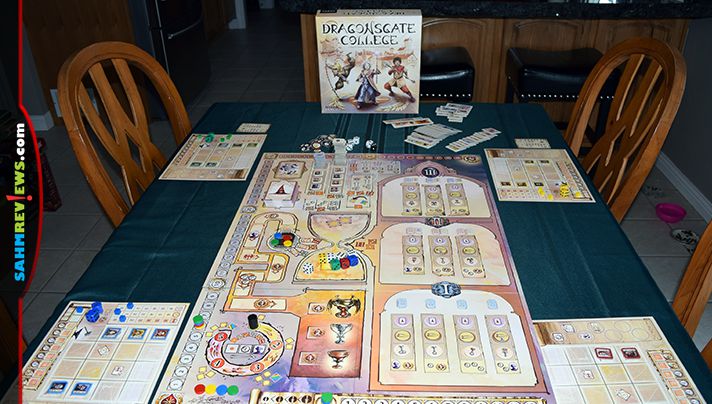 In Dragonsgate College, you are not the student. You and up to three other players are heads of one of the student houses and you are competing to expand your grounds, upgrade your staff and recruit new apprentices into the school. You’ll do so over only five rounds and must rely on good strategy and a bit of luck, thanks to the inclusion of dice. 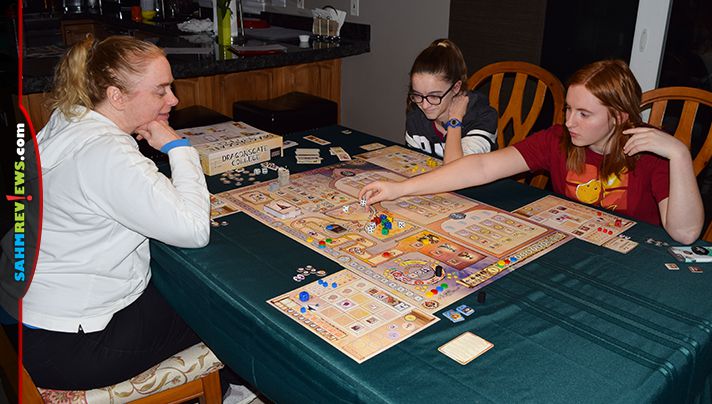 After a bit of randomized setup, all participants take a player board, tiles representing starting Apprentices and Professors and cubes and dice in their chosen color. Dragonsgate College is played over five rounds, with each round being divided up into five phases.

The first phase is rather obvious – fill empty spaces on the board with new Professor and Apprentice tiles. This is skipped in the first round since the board is completely full from when you set up the game. The next phase is called the “Income Phase” where all players receive two coins and additional income as determined by any buildings you have built. These will award additional coins, Imps or Wizardry cards (more on these in a moment). 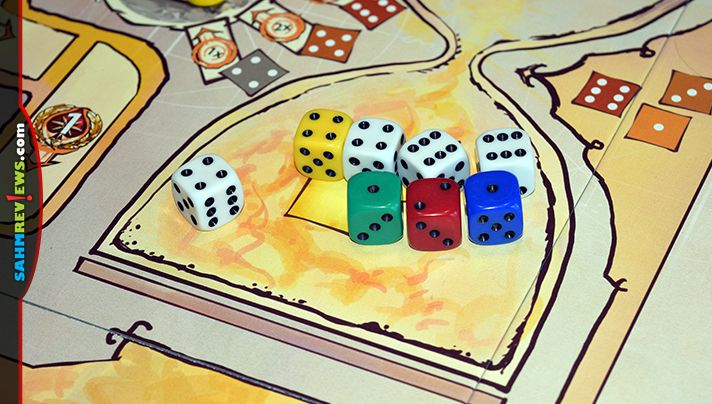 After income is divvied out, the Dice Roll Phase begins. At the beginning of the game, each player submits one of their colored dice to the pool and additional white dice are added until the total reaches twice the number of players. In subsequent rounds, additional white dice will be added that will allow for longer rounds. As the game progresses, players will have the opportunity to replace some of the white dice with dice of their own color in the pool. This will grant them additional actions in the next phase. This pool of dice is rolled and placed in the designated space on the board. 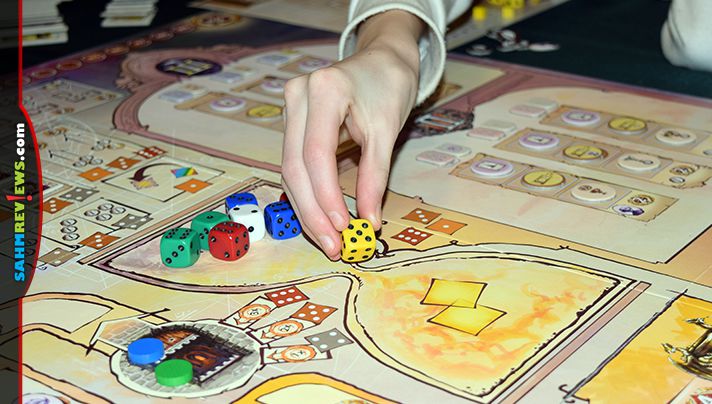 The fourth phase, the Action Phase, is the only part of the game where players take turns. In turn order, a player will draft one die from the pool and choose an action to take with it. Actions are limited by the number shown on the die, so you must hope there is a die with the correct value for the action you prefer. You may use one or more of your Imp tokens to temporarily change the value of the die up or down so you can perform the action you want. If you have drafted a die of your own color or one of the white ones, your turn ends and the next player in order now drafts a die. However, if you had drafted a die of another player’s color, they too get to take a free (out-of-turn) action immediately using the die’s value. Its value can also be altered if they wish to play Imps of their own!

The last phase is called “Clean Up” and involves resetting the board by removing all remaining tiles and readying it for the next round. All players must pay maintenance costs equal to their position on the Maintenance Track. If they are unable to pay, for each coin they are lacking, they will lose two Prestige (victory) points. Moral of the story – have enough money to pay for maintenance! 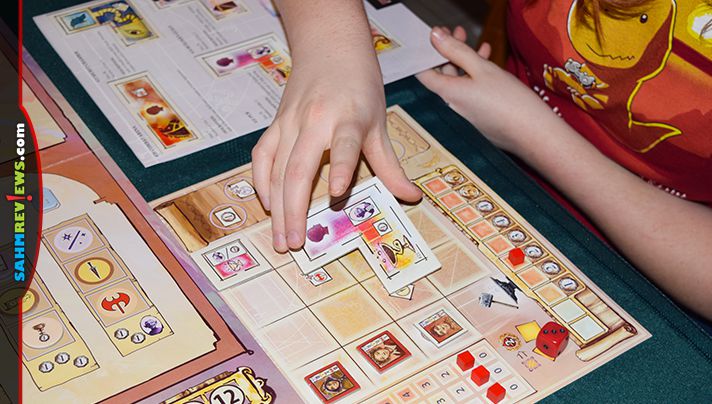 As I previously mentioned, the Action Phase is where the meat of the game lies. Actions allow you to collect coins, pay coins to receive Privilege Points, erect buildings, move your marker on the Training Dungeon Track, affect turn order in the next round, recruit Apprentices or Professors, assign them careers or even swap your colored dice for one of the white ones! This intermixing of actions is what you’ll need to master in order to maximize your scoring, which occurs at the end of the fifth round. 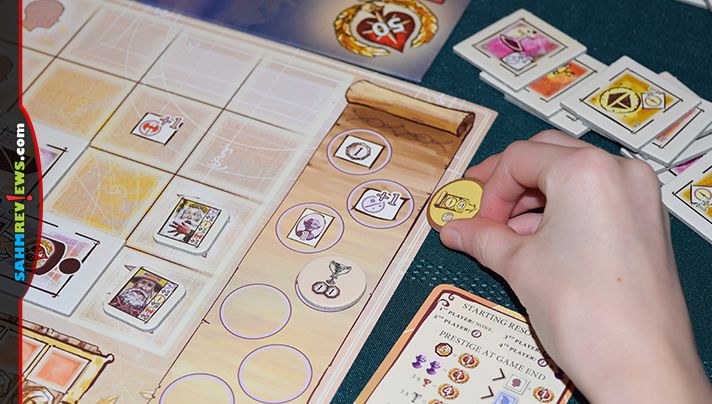 Let’s not forget that Dragonsgate College is a school, and choosing careers for your Apprentices is a major part of the game. Each career (Wizard, Rogue, Warrior) has a skill associated with it (Sorcery, Stealth, Brawn) and the Apprentice must have at least one point in the suitable skill printed on the tile. Additionally, they must have the career requirements by summing up the totals from the Apprentice tile and the experience values on the player’s board. Only once all three requirements are met can the Apprentice become a Wizard, Rogue or Warrior. Level 2 and 3 of each career have additional requirements to be met on the Mastery Tiles! 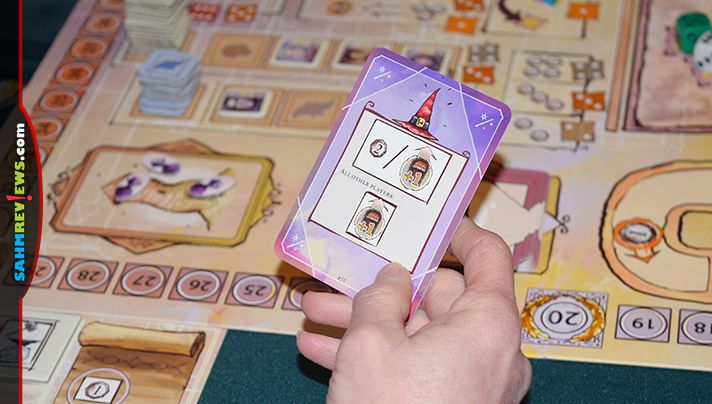 There are also Wizardry Cards you can play whenever you take an action. You may not hold more than two Wizardry Cards at any time and must discard down if you were to obtain a third. A few of them must be played immediately when drawing and may not be discarded without effect. Even if you didn’t want to take the action, you must. Fortunately if you have more than one that resolves immediately, you may decide in which order to play them. 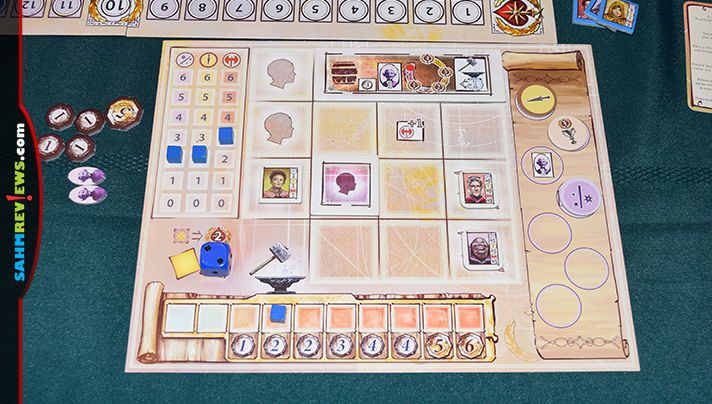 After completing the Clean Up Phase of the fifth round, a special one-time score phase occurs. You’ll receive Prestige Points for leftover coins and Imp Tokens, a point if you have the start player token, a point for having the most buildings, Apprentices or Professors and two points for each set of three different Career Tiles you earned. Each player with a disc in the Treasure Room scores Prestige according to their disc’s position. You’ll also receive points for your position on the Subterfuge track along with points for earned trophy sets (identical or different). Lastly, lose a point for each empty space on your House Grounds! The player with the most Prestige is the winner of Dragonsgate College!

Supporting 2-4 players, we feel the age recommendation for Dragonsgate College of 12+ is accurate. Expect a full game to push 90 minutes or more as players spend time trying to decide which action to take and whether or not to take the one that they really need and allow another player to get a free turn. It’ll take a couple plays of the game to truly get the grasp of what you’re trying to accomplish by constructing buildings and training Apprentices.

It doesn’t appear that Dragonsgate College is currently available on Amazon, but you will certainly find brand new copies on eBay or from your favorite local game store for the $40 MSRP. NSKN Games is a Romanian company, and while known for their excellent titles, it can be difficult to find them here stateside. Check out their website and follow them on Twitter (Board & Dice) and Facebook (Board & Dice) to find out which conventions they’ll be attending this year and pick up a copy directly from the source!

Which would you rather learn to become? A wizard, rogue or a warrior?