I came across Jonathan Strange & Mr. Norrell when I was browsing Netflix one weekend looking for something of interest. England of the early 1800’s where magic is a part of the world? I was sold. Imagine Harry Potter as written by Jane Austen. My chance encounter ended up with a weekend-long binge and the purchase of a great book. So when I heard that there would soon be a game based on the material I was very interested.

Jonathan Strange & Mr. Norrell: A Board Game of English Magic by Osprey Games is based upon the novel by Susanna Clark. It takes place in an alternate England where magic once ruled the land. For three hundred years there has been no magic, only groups who study the history of magic. In the early 1800’s as England is at war with France there comes a man from York to bring magic back into the world, Mr. Norrell. 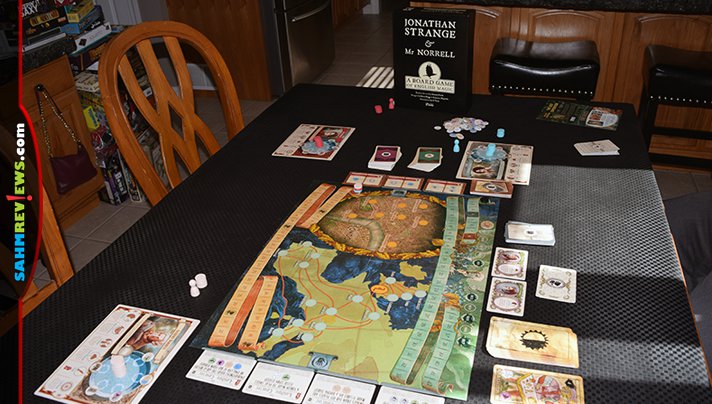 It is a world full of actual historical figures and plenty of fascinating fictional ones. The time is one of great strife for England and Mr. Norrell and his fellow magicians work hard to help England achieve their goals, but there is another threat to the world outside of the war that ravages the countryside. The Man with the Thistle Down Hair is working hard to bring about the end of the world and with more magic being added to the world the closer he comes to achieving his goals. 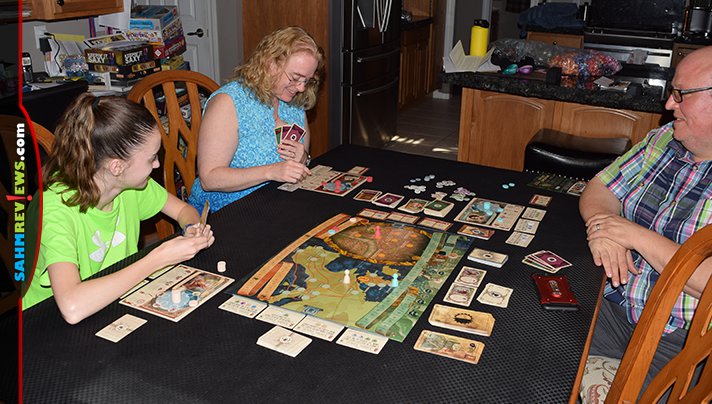 The board game has you taking on the role of one of the main characters from the novel in an effort to become the greatest magician of the age and to defeat the Man with the Thistle Down Hair. The game is played over a number of years (rounds). Eventually you will have your opportunities to defeat the villain, but in order to do that you must do two things – build up your magical skill to the point of rivaling the villain and increase your social standing to allow for greater connections in society that will make your task easier. 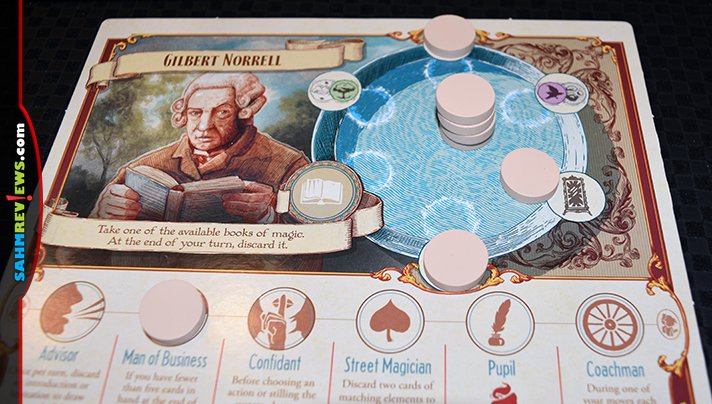 After choosing your character you begin play with 2-4 players. On your turn you chose one of the six actions on your own player board. To tell you about these actions I must explain how magic works in the game. Each player starts with three spells. In order to cast these spells they must come up with the elements on the spell. This can be a tricky thing because at the beginning of each turn a Marseilles card is drawn which shows you which of the six elements you can use this turn to cast your spells. 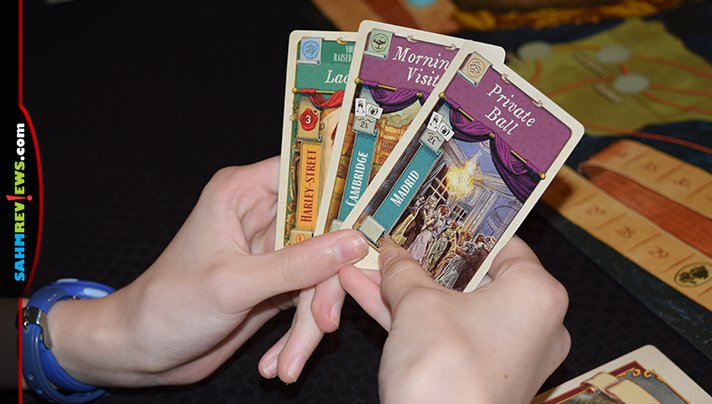 Three of the six actions that you can take on your turn involve studying different types of elements. You’ll need to choose one of these to be able to play those types from your hand to your spells if they are not revealed on the Marseilles card. One of the six actions involves obtaining a spell book, a large part of the novel. These spell books help augment your playing of the elements in some way. The fifth action allows you to move to any location on the board in London or all of Europe no matter how far away. The sixth and last action allows you to take the special ability of your character. 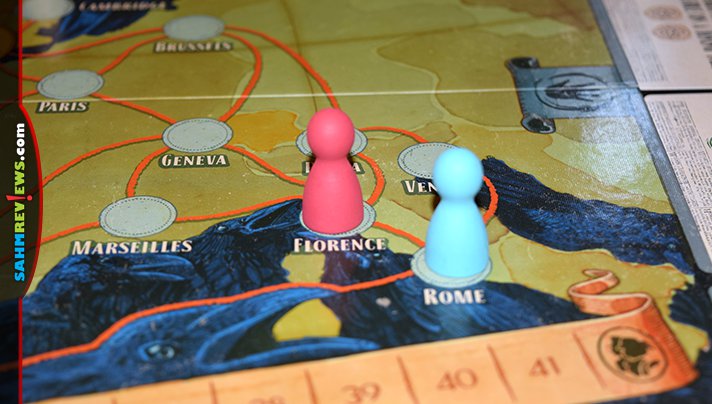 After choosing your action you are then able to travel around London or all of Europe playing cards from your hand that represent great balls or soirees that you are attending, or being introduced to some of the most famous people of the age. You have the ability to move on the board by moving two spaces along the pathways, or if in London, any location within the city. The reason for your movement depends on the cards in your hand. You are looking to match up locations where you are traveling to the location on the card. Once you are in a location that matches the card you can play up to two cards per turn. These cards provide additional elements, add to your status or even allow you to draw additional cards! 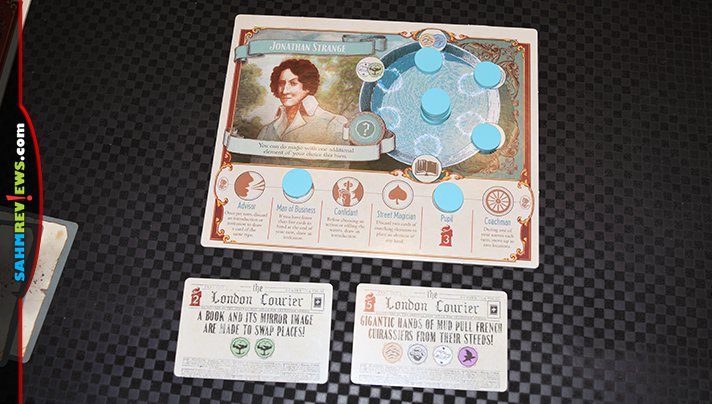 Once you have done your traveling and had your interactions, you are then able to ply your magical trade in order to increase your abilities hopefully to the point where you can make an attempt on the Man with the Thistle Down Hair. This is done by casting great feats of magic. The cards from your hands allow you to play specific elements to the spells in front of you. Once you have fulfilled all of the requirements on the spell it is complete and adds to your overall magical ability. 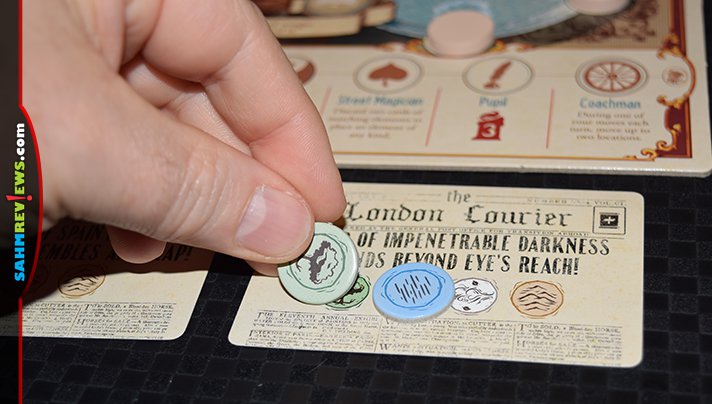 Lastly on your turn you check and see if it is one of the years that you can attempt to defeat the Man with the Thistle Down Hair. If it is, you compare your magical ability to that of the villain and if you match or beat his ability you win the game. If however no players ever come to the point where they can beat his score then the game is lost. 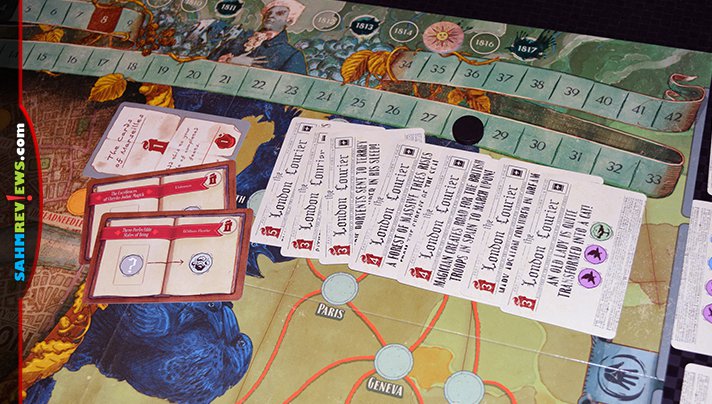 It was a treat to once again be able to revisit this world. The game is full of the characters and references from the novel. It was a great deal of fun to play this game with other fans of the novel and was very competitive until the last. Any excuse to spend time in this world is a good one, and the game proves to be a great reason.

Jonathan Strange and Mr. Norrell: A Board Game of English Magic can be found on Amazon or at your favorite local game store. We were also excited to learn of another bestselling series being turned into a game by Osprey – Embers of Memory: A Throne of Glass Game! Make sure you’re following them on both Facebook and Twitter to find out exactly when it will arrive! If you find this whole concept magical, enter to win a copy of the game!

19 thoughts on “Jonathan Strange and Mr. Norrell Board Game Overview”