Continuing on with games we found at this year’s Quad City Symphony’s annual Second Fiddle Tag Sale, we came across this interesting Rummy variation by Winning Moves Games. Rummy 21 was unique to us and piqued our curiosity because it included Rummikub-styled plastic tiles along with a standard deck of cards.

Originally published in 2001, Rummy 21 has to be one of the first games to include a neoprene playing board as standard in the box (mouse pad material). Today you have to usually pay an additional fee to a publisher to have the privilege of having a roll-up soft mat that doesn’t fit into the original box!

Rummy 21 is a variation of the classic card game of Rummy with the twist of having a second set of cards, represented by tiles in this example. The 60 tiles are shuffled and laid out in a square around the playing board and five are revealed at the beginning of the game. These are sorted into their suits and set by the board in their designated spaces.

A standard deck of 54 cards (jokers included) are also shuffled and hands dealt to each player. This will range from six to ten cards, depending upon the number of participants. The goal in Rummy 21 is to be the first player to get all of their cards out of their hands and score for sets they make. 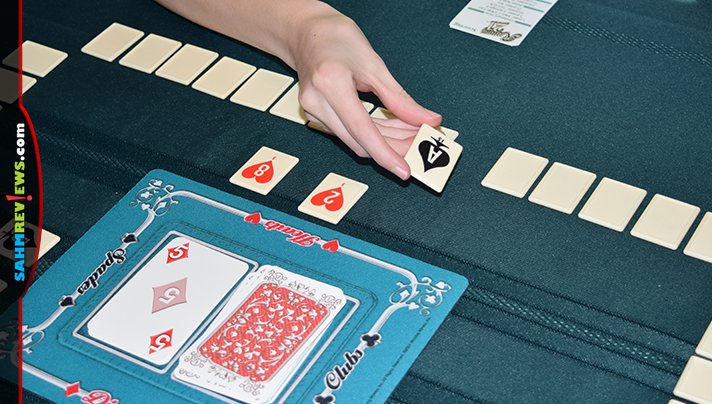 On a player’s turn, their first action will be to reveal two additional tiles from the pool and place them by the board. Then they can make any sets they wish as long as they follow normal Rummy rules. The only valid sets in Rummy 21 are 3-of-a-kind, 4-of-a-kind and runs of at least three cards. Sets also must contain at least one card and one tile (no all-card or all-tile sets are allowed). 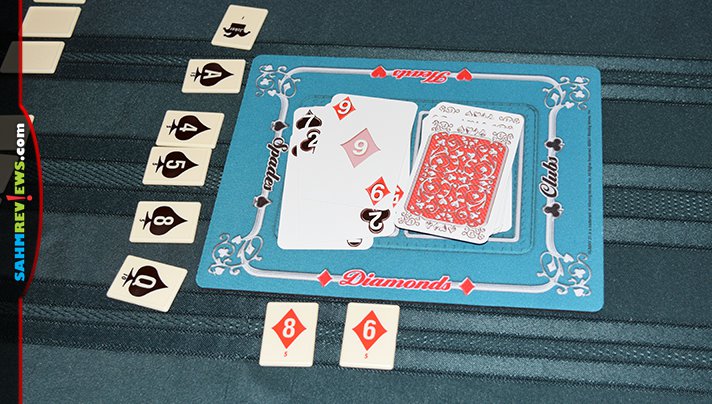 Additionally, there are points printed on the tiles that denote their value. Two through nine are 5 points, ten through King are 10 points and the Ace is worth 15 points. Jokers are only worth one point and a special Wild Cat tile is valued at -9. The cards are worth the same number of points, but do not have their values printed on them (an oversight, in our opinion). 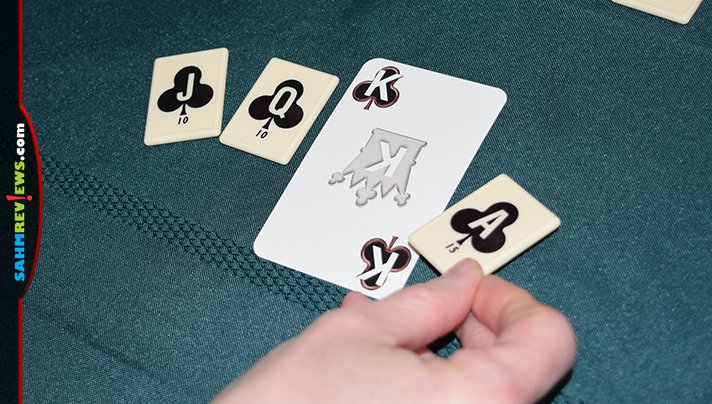 You may also steal wild cards from opponents if they have played them into a set on the table. If you have a card that would make their set still valid, albeit worth less, you can trade the card from your hand and take their Joker or Wild Cat for use in your own set! This is a great way to break up those high-scoring Prize sets (more on this in a second). 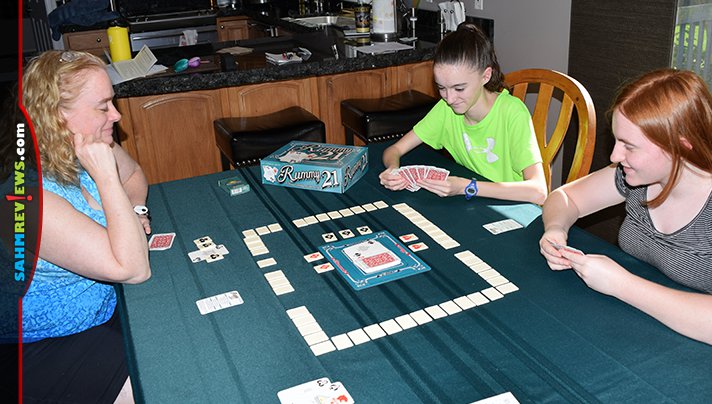 After playing as many sets as you wish, you then draw one card from either the deck or discard pile and then discard one from your hand. Play continues in clockwise order until one person is able to “lay off” their final card by playing it into one of their own sets or an opponent’s set. This is the only time you can play a card to an opponent’s sets – all other times you are working on your own. At this time, round scoring commences. 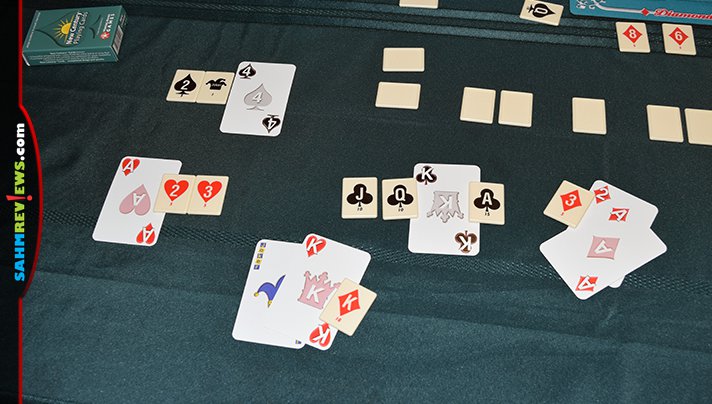 Sets are classified as Ordinary or Prize sets. Oriinary sets are worth the sum of their basic value printed on the tiles. Prize sets are special sets that total 21 (which score 100 points) and 4-of-a-kind (which score 75 points). If a set is both a 4-of-a-kind AND totals 21, it receives both bonuses for a total of 175 points! If you were the player to go out first, you also receive a bonus of 100 points and if you were able to hold all the sets in your hand until your last turn, score an extra 100 points! You can also earn an additional 50 point bonus for any other players that were “shut out” and hadn’t played a single set in the round! All other players sum up the point value of cards left in their hand (Jokers are -50 points) and subtract it from their overall score. Rummy 21 is played over multiple rounds until one player amasses 1,000 points or more. That person is declared the overall winner!

We found Rummy 21 to be an interesting twist on the classic game of Rummy, but the scoring was too convoluted for us. The addition of tiles is a nice touch, but could have also been accomplished with a second deck of different-colored cards. Still worth a couple bucks at thrift or a local yard sale, but not one we’d pay much more for. There are a number of copies available on eBay for a wide range of prices. Be patient until you find one at a really good price point!

What version of Rummy is your favorite?