Each year, all year long, we rave about our favorite things and reminisce about iconic characters from our past that are thrust back into the spotlight. From movies, games and television shows we are able to enjoy as a family to being excited about checking out a new product that has become a hit for a new generation, we like being able to share things that have become part of pop culture. Again this year, we decided to compile a list of some pop culture gift ideas that bridge the gap in generations. As an example, a child who may not be familiar with Home Alone can be introduced to it through a board game. Families and friends who geek out over Harry Potter, X-Files or Jurassic Park can enjoy these licenses in a new form. Of course, you have to admit that even with computers and phones that create amazing images and graphics, we’re all still drawn back to 8Bit and pixel art products. Those are the types of items you’ll find in this gift guide.

logo. This clickable icon indicates that we’ve highlighted the product in more detail prior to the release of this gift guide. Click through to read more details and see if it might resonate with someone on your shopping list. Of course, we also encourage you to check out the other gift guides to find more ideas, too. We’ve already released a guide to games for little kids, suggestions for family games, stocking stuffer ideas, puzzles ideas for a variety of ages, a list of card games, a variety of dice games, a selection of games that teens and adults can play together, games to play with large groups and even a guide to educational and STEAM gifts. Surely you should be able to check something off your list with these ideas. Or perhaps you’ll end up creating a list of ideas for yourself that you can pass along to others! 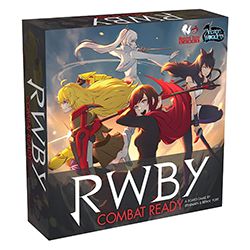 RWBY: Combat Ready is an exciting cooperative game for 2-4 players that captures the flavor and excitement of the series, with fast-paced battles where all players are actively engaged in the role of one of the four main heroines in team RWBY: Ruby, Weiss, Blake, Yang, or as Penny Polendina! 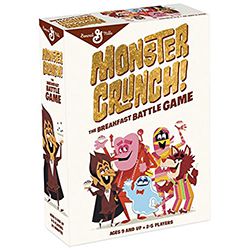 It’s ok to play with your food! Pick your favorite Monster Cereal character and battle to see who can “eat” the most cereal. In this fast-paced game of luck and strategy, players collect as many Cereal Cards in their Bowls as they can. Each Monster has special powers to give you an advantage and help you gobble up the most cereal. Use Milk Tokens to combine Cereal Cards and take bigger bites. The Monster Cereal character that munches the most wins the game! 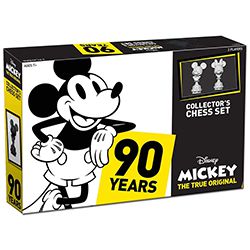 Celebrate 90 Years of Magic with Mickey, The True Original, in this classic chess set featuring universally known and loved characters from Disney’s timeless franchise! Mickey Mouse & Minnie Mouse, Donald Duck & Daisy Duck, Pete & Goofy, and more stand in familiar positions on the board for one player to overtake their opponent’s pieces, making Disney Mickey: The True Original Collector’s Chess Set fun to play for beginners and nostalgic for savvy folks! 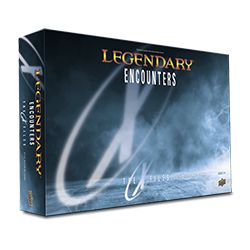 Legendary® Encounters: The X-Files™ Deck Building Game is a card game themed around the award-winning television series The X-files™. Players will take on the roles of their favorite truth-seeking special agents like Mulder, Scully or Skinner and work together to expose a variety of grand conspiracies. Mystery and subterfuge fog the way forward as players, encouraged by beliefs and encountered by doubts, work to reveal and defeat an unrelenting stream of malevolent agents and paranormal entities. 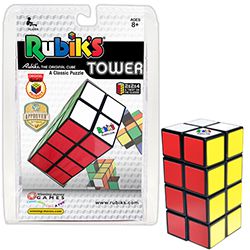 This 2x2x4 Cube is an interesting twist on the original Rubik’s Cube. Imagine two 2×2 Rubik’s Cubes on top of one another, that are able to rotate around a central axis. This allows for an especially diabolical twisty puzzle! 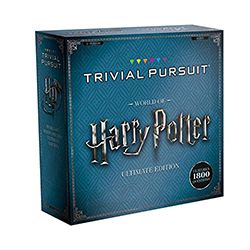 Part ode to the comics of yesteryear and fascination with really big comics, Golden Bell Presents: The Sunday Comics! The Sunday Comics is not your typical newspaper, rather, a new and innovative way to read comics. Every issue’s packed with dozens of original stories, while featuring a sprinkle of everyone’s favorites from Tarzan and Dennis the Menace to Rugrats and Garfield! Printed on 15 by 22 inch original newsprint, let’s make comics big again! 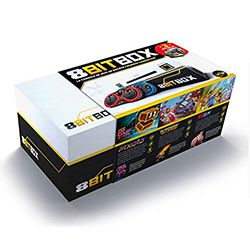 Classic Retrogaming in Boardgame Form. Inspired by retro-gaming, 8Bit Box contains everything to recreate the sensations we all had playing classic games from the 80’s. With the controllers in your hands, live a new gaming experience to share with your friends. 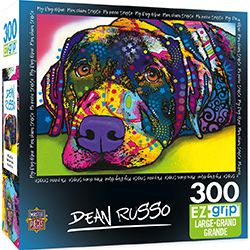 This MasterPieces 18″ x 24″ Dean Russo 300PC EZ Grip Puzzle is the perfect blend of vibrant colorful art and adorable pups. Dean starts his paintings with the eyes, because, as every animal-lover knows, the eyes are the most expressive. Dean Russo Art Studio has a sincere dedication to animal rescue, and has participated in charity auctions, donations and fund-raising events. Through inspiring messages and bright prints, Dean Russo’s work is sure to brighten anyone’s day. The EZ-Grip die-cut used to make this puzzle offers larger puzzle pieces for easier visual and grip that snap together perfectly, without compromising image quality. 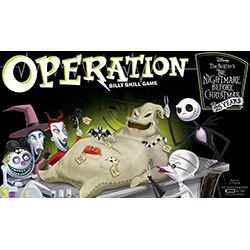 Tim Burton’s The Nightmare Before Christmas Collector’s Edition of Operation celebrates 25 years of this movie classic and allows fans the opportunity to be the surgeon and remove custom Funatomy parts from Oogie Boogie, the patient. 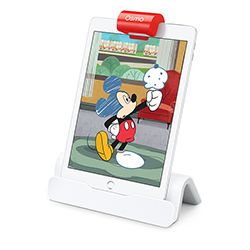 Super Studio allows kids 5-12 to become their own animators, and stimulates their minds by exercising their creativity. In this interactive game, kids animate a cartoon filled with Disney characters by providing the visual material and even choosing how the plot progresses. As the story develops, characters ask for tools, toys, scenery and snacks to bring into their world. For example, when kids are asked to draw Daisy they have the freedom to draw her as they see her – or how they’d like to see her – with a bow, an astronaut helmet or hijab – the only limit is a child’s imagination! 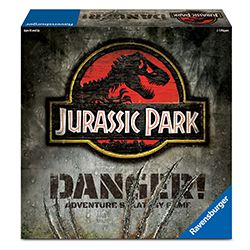 The first visitors have arrived at Jurassic Park™ to see its miraculous dinosaurs firsthand. But chaos has hit Isla Nublar— the power is out, and the prehistoric creatures are on the hunt! One player controls the T. rex, Dilophosaurus, and Velociraptor, prowling through the jungle to attack the humans. The other players team up as characters from the classic movie, struggling to get Jurassic Park™ back online and escape the island before they fall prey!

Star Trek: The Next Generation Fluxx 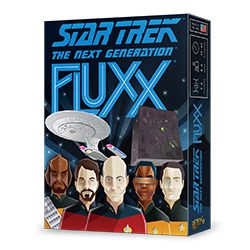 Beam yourself aboard the Enterprise and join Picard, Riker, Data, and the rest of the TNG crew to gather the Keepers you need for victory – but don’t let Creepers like Q or the Borg keep you from your mission! Also available: Star Trek Fluxx (TOS) and The Bridge Expansion Pack to shuffle the two decks together! Engage!

Don’t Mess with Cthulhu is a social deduction game with secret identities. Players are either Investigators trying to keep Cthulhu from waking and controlling the world, or Cultists that want to bring the world to a disturbing end. The game takes place over four rounds. The Investigators must uncover all the Elder Signs to win; the Cultists win when Cthulhu is revealed or if the game ends before all the Elder Signs are discovered. Don’t Mess with Cthulhu Deluxe is a new edition of this game with the Necronomicon and Objects of Power that allows for play with 4-8 players! 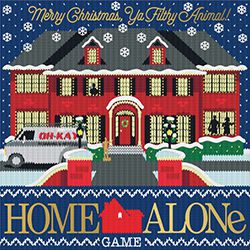 It’s time to defend the house! When the McCallister family jets off for the holidays, they accidentally leave 9-year-old Kevin home alone. And now, the notorious Wet Bandits are casing the neighborhood, hoping to score some valuable loot! Team up as the burglars to try and steal the goods, or play as Kevin to unleash an arsenal of creative contraptions to protect the house. Who will triumph—the little guy or the bad guys? 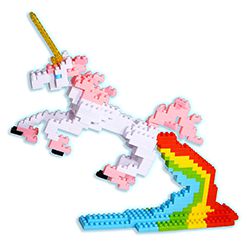 3D Pixel Puzzles are the next generation of collectible 3D Puzzles. More than 270 vibrant pixel pieces assemble to make a fanciful unicorn. This standard puzzle is graded 2 out of 3 for difficulty and is a challenge for the accomplished puzzler. Each 3D Pixel Puzzle features precision-tooled pieces and displays beautifully. Illustrated, step-by-step instructions included. Approximate assembled size of the Unicorn puzzle when completed = 5-3/4″ x 7″ x 1-1/4”. Ages 12 and up.

The Nightmare Before Christmas Collector’s Edition of Monopoly celebrates 25 years of this movie classic by allowing fans the opportunity to collect and own iconic locations such as Jack’s Tower, Oogie Boogie’s Casino, Dr. Finkelstein’s Laboratory and Sally’s Alley.

As with all our other gift guides, you may find many of these items showing up in our Mega Givaway so if you see something that interests you, tune in at 3 pm (Central) daily to see if it’s the prize for that day’s giveaway! 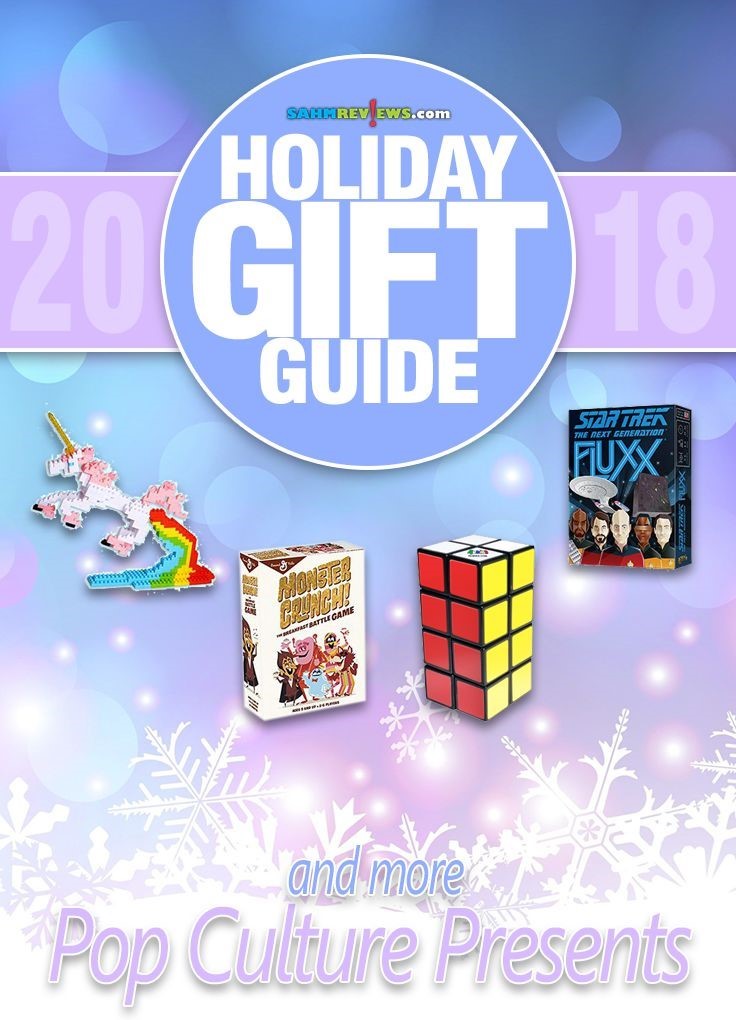