Last week I participated in a survey with a major technology company that was seeking details on a typical day in the life of our family. While Scott and I are retired, SahmReviews keeps us pretty busy. But we’re mostly at the mercy of the girls’ schedules. With school, homework and their various extra-curricular activities, family time is often limited. As I talked to the tech company on the conference call, I consistently heard myself raving about the relationship we have with our kids. I attribute a lot of our ability to talk about the things that interest or bother them to the fact we spend so much quality time playing board games. When you sit down and play a game, guards are down and everyone is on an even playing field. We are able to have conversations in a setting that isn’t filled with stress. Each year we make a lot of room in our holiday gift guides for games, but we put an emphasis on games to play as a family because we know first-hand the benefits.

This is the first of two guides dedicated to family games. As you look through this list, don’t judge a book by its cover. Just because a game may be appropriate for ages 5+ doesn’t mean it isn’t entertaining for the entire family. It simply means that the instructions are easy enough that someone young could figure them out. There are days when the schedule allows us to sit down for a long, in-depth strategy game and other days when we only have time for a quick game as a homework break. There’s a place for all kinds of games in families with kids of all ages and you’ll find that variety displayed right here. If something looks interesting, we encourage you to click on the

logo to learn more about that specific game. 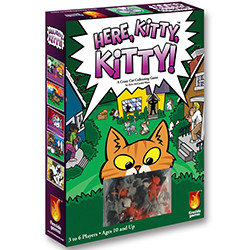 Your neighborhood has a cat problem! The problem is that all those cats don’t belong to YOU! Everyone in the neighborhood wants to claim those adorable kitties for themselves.

Outwit your fellow feline fanatics as you lure cats onto your property, move cats into your house, and steal cats from your neighbors. All’s fair in love and cat collecting!

Use your “Catlike Reflexes” to avoid “Stray Dogs” and “Hairballs,” and you might just “Land on Your Feet!” 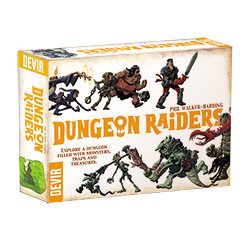 In Dungeon Raiders each player takes the role of a different adventurer. You will have to join forces to survive the dungeon, but only one of you will get out with the most treasure and win the game! 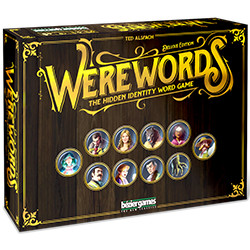 In Werewords Deluxe™, there’s additional fun guessing a secret word by asking “yes” or “no” questions before time runs out. As in the original Werewords, there are players secretly playing as werewolves or villagers or as a seer either hindering or helping the village. In Werewords Deluxe, there are new roles and game modes and you can now play with 2 to 20 players.

The Legend of the Cherry Tree 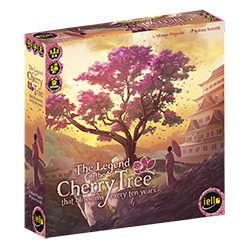 Do you know the legend of the cherry tree that blossoms every ten years? The story goes that once every decade, the Cherry Tree would shroud itself in beautiful flowers during the first days of spring. Join in with friends to see who can gather the most beautiful flowers. Will you be worthy of having your wish granted? 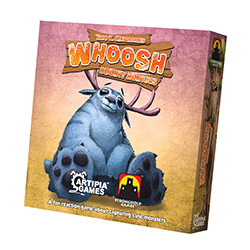 Whoosh: Bounty Hunters is a fun, fast reaction game in which players try to capture cute monsters and collect bounty.

Each player has a draw pile of Weapon and Spell cards. Three Monster card piles are at the center of the table, each with a revealed card in front of it. Each Monster requires different Weapons and Spells to be captured. 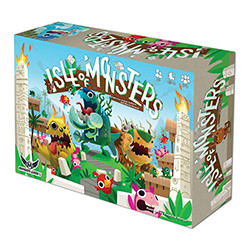 On the Island of Nowhere Atoll, terrifying (but utterly harmless) beasts reside. Can you wrangle the best sets of monsters, nurture them by collecting their favorite foods, and present the most horrifying group of monsters ever seen on the Island?

In Isle of Monsters, a set collection, resource-gathering family game, 2-5 players take the role of monster wranglers attempting to gather the scariest team of monsters they can find in order to compete in the local Scare Faire. Getting screams from the audience gets you acclaim, as does scaring the monsters owned by other players. 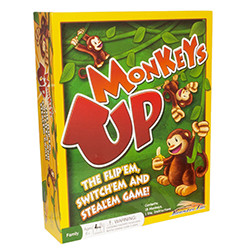 Monkeys Up™ is the game that will have you going bananas! Players compete to get the best score by flipping, switching, and stealing monkeys. Each monkey has a value hidden under its feet that is only revealed when flipped. Victory will come to the player who switches, steals, and flips the best. You will find yourself laughing head over heels until all of your monkeys are up!

2017 Game of the Year Award by Creative Child Magazine 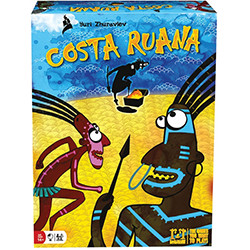 The Natives of the Costa Ruana Islands are Extremely Lucky! The local pirates have chosen their Islands as the most reliable place to hide treasure chests overflowing with gold and gems! Too bad the pirates have no idea that these Islands are inhabited by natives who very fond of yellow shiny things! As a tribal chief you will send your people to the Islands, obey the Shaman, outwit the other chiefs and get your hands on as much treasure as you can! 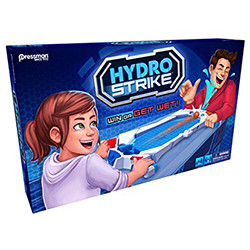 Get ready to make a splash with Hydro Strike! In this head-to-head pinball game, you’ll need fast flipping fingers to shoot the ball into your opponent’s goal. Score and your opponent will get sprayed in the face with water! Since a sprayer is aimed at both players, strike quick when you play, or you’ll get the spray! The first player to score 5 times wins. Will you win or get wet? 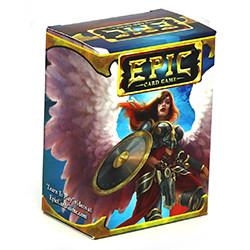 Epic is a fast-paced card game of fantasy combat. It gives you all the strategic, interactive gameplay of a trading card game at a tiny fraction of the cost. What alignment will you choose: Good, Evil, Sage, or Wild? Two to four players can play out of one $15 deck. And it fits in a stocking!

More suspects, more rooms, and more weapons Clue Master Detective is the perfect game for Murder Mystery Parties. Introduced in the 1980’s this super-sized version of Clue adds up to a lot more mayhem! Use your sharpest detective skills to solve the ever-changing mystery! 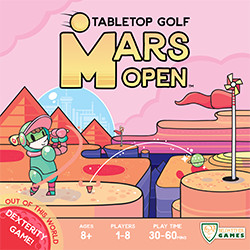 The universe’s best tabletop golfing game! Flick your wacky “golf ball” over 3D obstacles and through over 54 pre-designed holes for your table. You win if you have the lowest score after 9 holes. Then design your own course! For 1-8 players.

Pyramid of Pengqueen is a strategic game of cat and mouse for children, families, and casual gamers, in which your goal is to collect the treasure before the player playing as the mummy can catch you. Featuring a double‐sided magnetic board which hides the movement of the players! 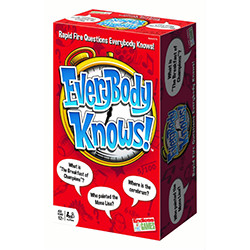 QUICK! What’s the capital of California? Who played Forrest Gump? What’s 5 X 16? What animal is the “King of the Jungle”? What letter comes before “J”? What new game is all about answering questions EVERYBODY KNOWS the answers to in 60 seconds or less? Sure, the questions may seem easy, but try going 10 for 10 in 60 seconds! It’s the game of questions Everybody Knows… but can you answer UNDER PRESSURE? 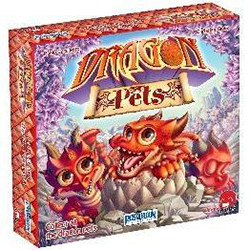 A game of dragon breeding for 2 to 4 players. Welcome to the 1783rd annual Dragon Breeding Competition! Using a pool of dice you must share with the other breeders, send your Dragon Seekers out into the Forest to catch the most rare and wondrous dragons—and find suitable mates! But be careful: time can run out quickly, and unpaired dragons will inflict a steep penalty! Gather the most valuable breeding pairs and claim your rightful title as the Supreme Dragon Breeder in this game from the creators of Dungeon Bazar and Guilds. 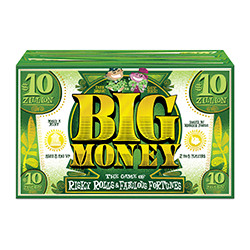 Everyone gets crazy rich! But who will end up the richest? You have three rolls of the dice to rake in the dough. Then buy amazing investments for your empire! Do you want a candy factory or a pro soccer team, a robotics lab or a movie studio? You decide what risks to take as you collect companies and become a Zillionaire!

Buy at Walmart or Walmart.com!

Make Your Escape! Who will break out of prison first? Harry Highjump and Billy Breakout have both had the same idea, but will they get in each other’s way? Each needs to tie a knotted rope to freedom. Who’ll be first to scale the wall and make it over the top? Join together the colored pieces of rope to get your Prisoner from the top to the bottom of the wall. Try to block off your opponent prisoner’s route before he blocks yours. The first to create an unbroken rope to the bottom wins! 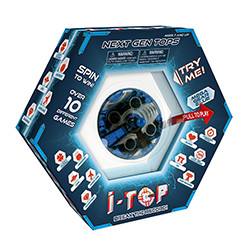 Check out the new generation of tops with i-Top! Using smart technology, this high-tech top keeps track of the number of spins while LEDs light up the display. Spin your way to the top score by competing in multiple challenges. Unlock hidden features by spinning the top an exact number of spins to show special animations, or challenge your friend to a high score. Available in Mega Gear Blue, Infinite Purple and Vortex Red. 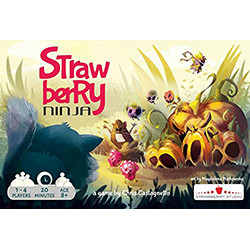 In a place not that far away, a lush garden was invaded by a Strawberry Ninja! The stealthiest berry you’ve NEVER seen! Strange as your garden may be, it’s never good to have a ninja running loose in your backyard, so now it’s up to you (and one brave kitten) to apprehend the rascal! Build the garden, discover its secrets, guide the kitten together! Each game is 20 minutes of cooperative family fun. 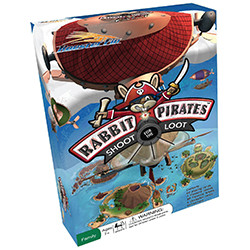 Rabbit Pirates™ are in search of buried treasure. Help them shoot for the loot in this simple card game that suits all ages, from kids, teens, college students, parents, and grandparents. If you have ever played the card game of war, Rabbit Pirates will be your new family game night favorite. The object of the game is to play high valued cards to win bronze, silver, and gold treasure tokens.

Consider grabbing a couple of these family games for someone on your holiday list and be sure to check out our prior guides that include amazing card games and puzzles for all ages. Over the course of the next couple months, we’ll be launching a giveaway each day for items that have appeared in our gift guides. Watch for most of these games to show up in our Mega Giveaway promotion where you can enter to win a copy. There may be some you’re super excited about or perhaps some games you’re on the fence about, but entering the giveaway doesn’t cost anything except a few minutes of your time so it’s worth it to try! 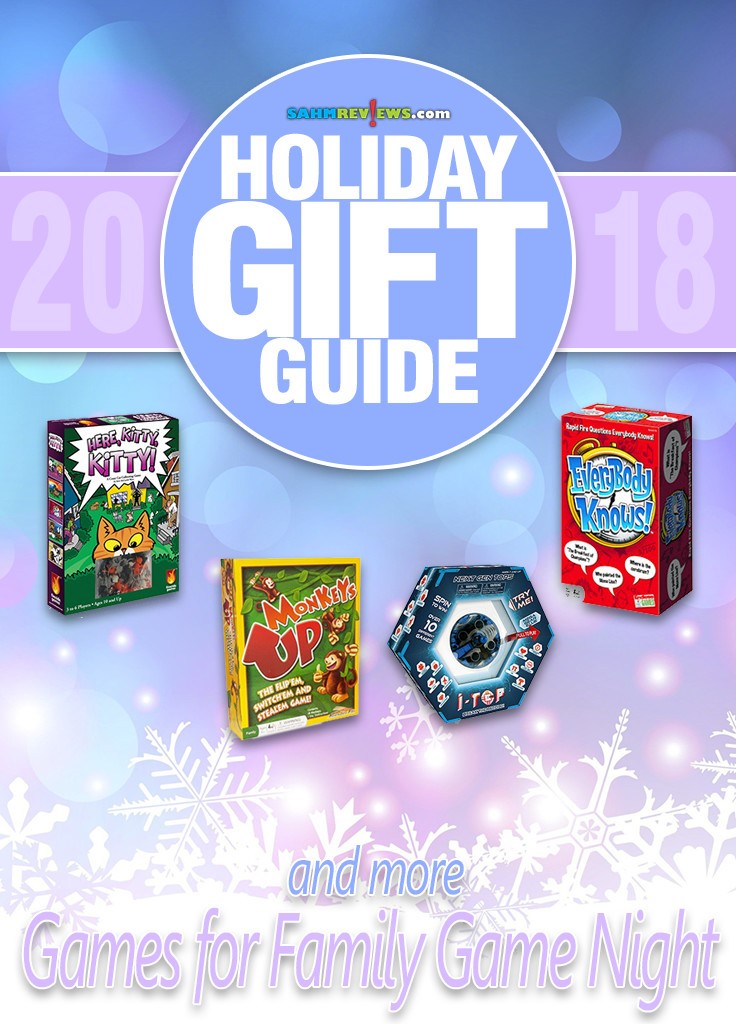