Wednesday’s recommendation for a game to play on Halloween had us scaring the monsters under our beds and putting them into a closet. While it was named Monster Chase, a more descriptive title might have been “Monsters Under the Bed” or “Back Into the Closet”.

This last entry into our Halloween list could have been also called “Monster Chase” as that’s what the premise of the game is about. In Isle of Monsters by Mayday Games, you and up to four other players are living on a tropical island and have learned how to use different combinations of ingredients to transform animals into monsters. These monsters are harmless and are more like pets than a scary under-the-bed type of creature. Your job is to chase down and capture some, feeding them each their individual diets and using them to scare the crowd (and opponents’ monsters) in a scare competition! 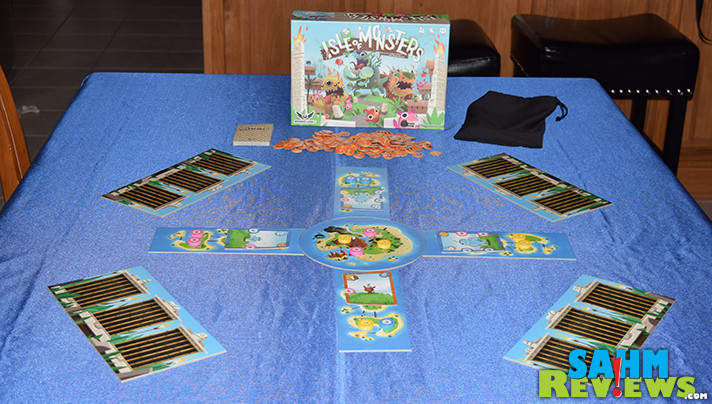 Isle of Monsters is played in rounds, with each round being broken up into four phases. The first phase is cutely named the “Nurture Phase”. This is where you’ll take one of three possible actions – capture, feed or pass. Capturing a monster is as simple as taking the top Creature Card on either of the two Outer Island Boards next to you and placing it in an empty cage on your personal Cage Board. 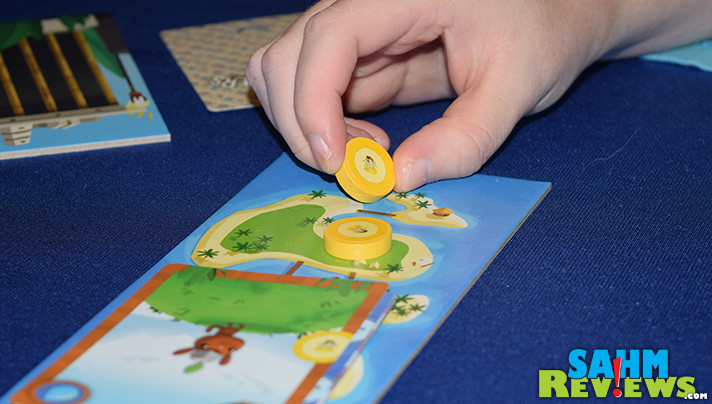 Feeding is done in a similar manner. Take a food token from the Center Island Board or one of your adjacent Outer Island Boards and place it in the matching space on a previously-captured Creature Card. Of course you can also pass your turn if you prefer (or cannot) perform a capture or feed your monsters. The first player to pass in a round takes the Draw Bag and will become the start player for the next round. 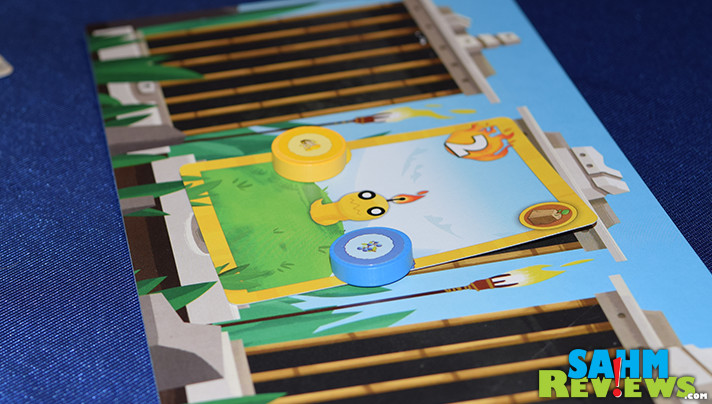 The second phase is the Mature Phase. All players check their Cage Boards to see if any of their creatures are fully fed. This means the monster has matured and is ready to scare! Remove the Creature Card from your Cage Board and place it face-down next to it. These are kept secret from other players, but you can always ask another player how many creatures in total do they have. 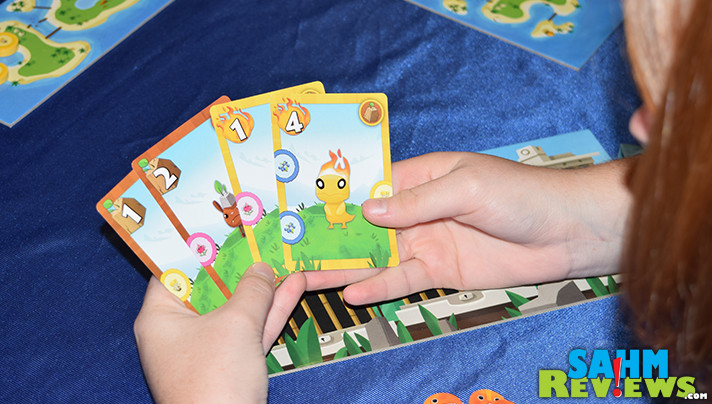 Now that you have matured monsters, they can participate in the scaring festivities! All players who have at least one mature Creature Card will participate and must choose at least one of a single type (water, fire, earth – depicted in the upper left corner) and places it (or them) face down. At the same time, everyone flips over their played cards. Add up the total Scare Value (upper left) of all the Creature Cards played. The person with the highest total takes a 3-point Scare Token from the pool. If there is a tie, all tying players take a 1-point token.

The Scare Phase in Isle of Monsters actually has two parts. First you scare the crowd watching the festivities (above). Then the monsters try to scare each other! Each type of Creature Card scares another type, which is denoted in the upper right corner of the card. Using the same played cards, take a 1-point Scare Token for each adjacent player who played a Creature Card of a type that your monsters will scare. Once everyone has scored, set all used Creature Cards aside for the moment.

This Scare Phase is repeated multiple times until one of two things happen. Either all players will be out of Creature Cards or only one player will have any remaining. In the case of the latter, that player receives a 1-point Scare Token for each remaining Creature Card since no other player has monsters to compete with them.

Lastly, it is time to clean up. The player with the Draw Bag replenishes the food supplies on all islands by drawing tokens in the same manner as when setting up the game. Food tokens from previous rounds remain on the islands, so there may be areas with a lot more food than others. A new creature card is drawn from the deck and put on top of each Creature Card pile on the Outer Island Boards.  The next round begins with the new starting player! 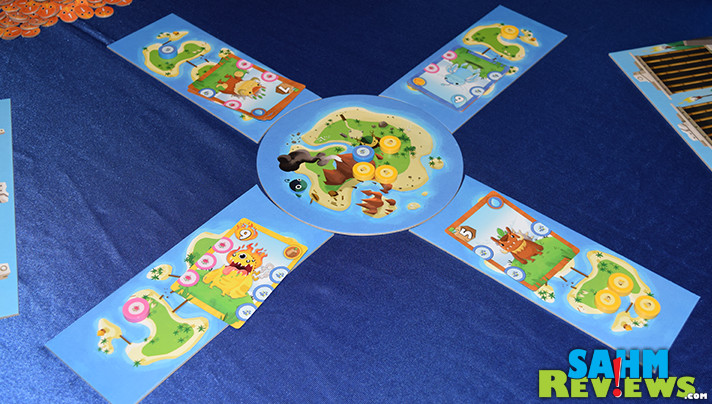 When the very last Creature Card is dealt from the deck, the final round begins. This round is played in the exact same manner, except the final Clean Up Phase is not needed. Players total up the number of Scare Points on their collected tokens and the person with the most wins Isle of Monsters!

A full game of Isle of Monsters should run only 20-45 minutes (yes, depending on the number of players!). The first few rounds will go pretty quick since there probably won’t be many mature creatures to display (until they are fully fed). You can find your copy of Isle of Monsters on Amazon for under $25 or at your favorite local game store. If you’re having trouble locating copy of this hot game, enter to win one for yourself directly from Mayday Games by using the form below! Come back each day to increase your chances of winning! And thanks to Mayday’s generosity, this one is open to everyone worldwide!

19 thoughts on “Isle of Monsters Board Game Overview”