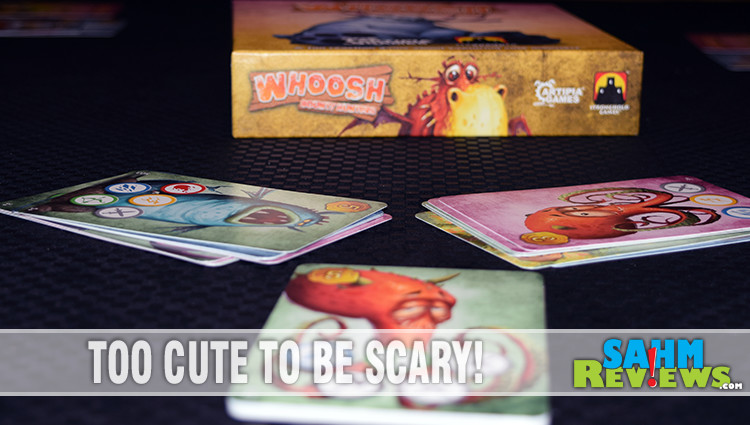 Hopefully you’ve taken us up on our suggestion of playing tabletop games while taking turns answering the door during trick-or-treating. Our list of games to play on Halloween included everything from monsters to ghosts to zombies and we’re sure there was at least one that would be perfect for your family. But today is Halloween and even if you aren’t playing a scary-themed game as a family, we hope everyone is enjoying the holiday and filling themselves to the brim with sugar!

We’ve recently discovered another monster-themed game that was almost perfect for our Halloween list. We say “almost” because we felt that it didn’t quite fit into the same genre as the others we featured. All of those had you capturing evil monsters, turning people into zombies or playing as a ghost and scaring kids. The game we’re playing tonight, Whoosh: Bounty Hunters by Stronghold Games, has monsters too cute to be in their company!

So why did we choose Whoosh over all of the other great Halloween-appropriate games to play? First, with the girls being “too old to trick-or-treat” (their words, not ours), it is their favorite type of game – one that involves speed. Secondly, it supports up to eight players. A perfect amount for not only the family, but for when friends and neighbors stop by to say “Hi”. Lastly, a full game of Whoosh only lasts about 10 minutes! The perfect amount of time to get a round in between door-knockers!

Included in the box are 36 Monster Cards along with 108 Weapons & Spell Cards. The Monster Cards are shuffled and divided into three face-down piles in the center of the play area. The top card is revealed and put on top of each stack. All of the Weapons & Spells Cards are also shuffled and split into as many piles as there are players. No need to count them out, a rough division is fine. 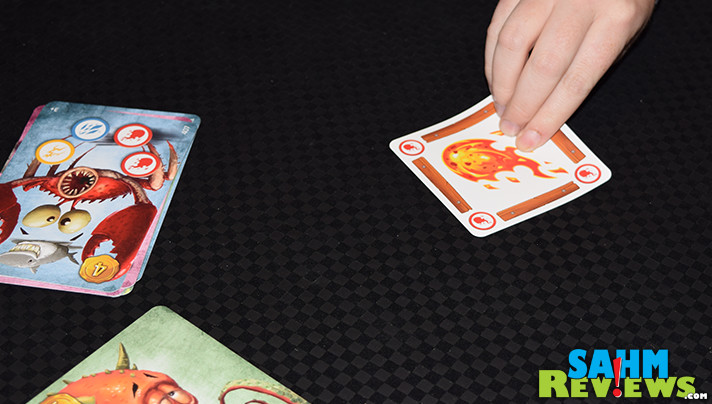 On each Monster Card there are a number of icons printed at the bottom. You are trying to match these up with the Weapons & Spell Cards! On each player’s turn, they will turn over the top card from the Weapons & Spell Cards deck in front of them and place it face-up next to it. The next person in clockwise order does the same, working around the table. If a player turns over an additional card in the round, it is placed next to the first card and not on top. 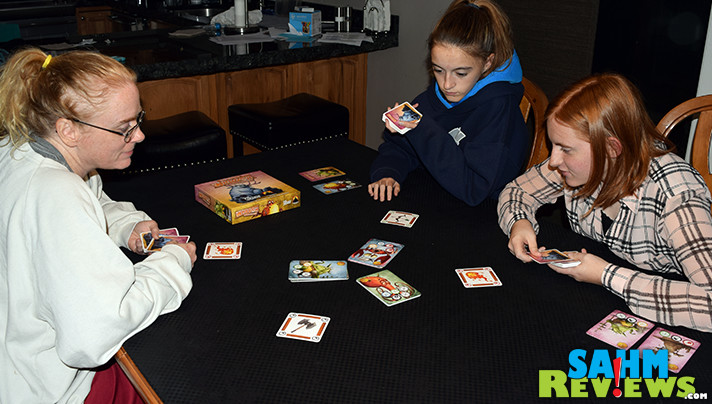 Special cards add an interesting twist to a game of Whoosh. Some have more than one icon, and these combo cards count as both symbols. Others have a red “X” in each corner denoting the item is broken as does not count when you’re trying to satisfy a monster’s requirements. This can be tricky if you’re trying to quickly look at the icons and not paying attention to the whole card! Lastly, a Wizard’s Staff card is treated as a wild card and can represent any weapon or spell! 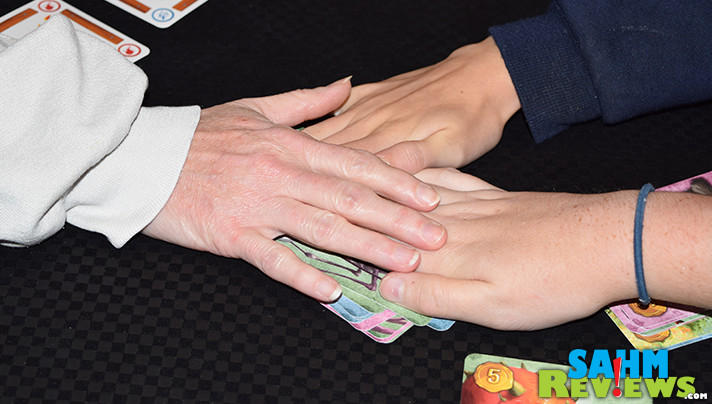 While this is happening, everyone is comparing the results to the Monster Cards to see if matches can be made. Once someone thinks all of the “ingredients” are present (face-up in front of players), they slap their hand onto the Monster Card to claim it. If correct, that person takes the Monster Card to their personal pile, leaving it face-up. If chosen incorrectly, they still take the card, but place it face-down in their pile to be counted against them later. 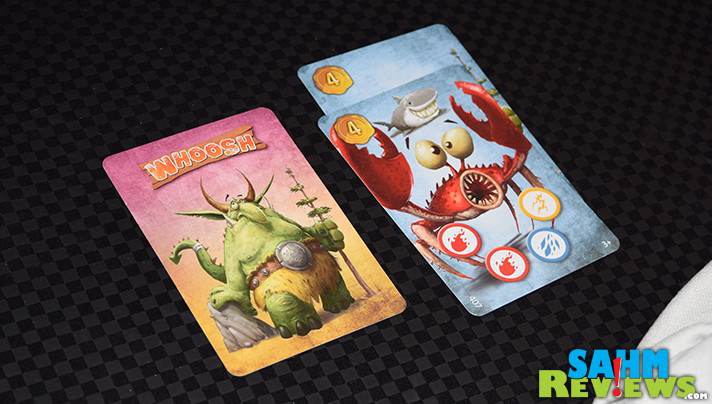 Whenever a Monster Card is removed from the board, all Weapons & Spells Cards are also removed and returned to the bottom of each player’s deck. A new round is started by the person who gained the card after a new monster is revealed. When the last monster from any of the three decks is taken by a player, the game ends immediately. Add the points for all face-up monsters in your pile and subtract one point for every face-down monster. The player with the highest point total wins Whoosh: Bounty Hunters!

It’s not too late to run out and pick up a copy of Whoosh from your favorite local game store in time for tonight’s festivities. Already have your game picked out for the evening? Whoosh is still worth picking up for under $20 on Amazon for those impromptu gatherings. If you’re really feeling lucky, try to win a copy for yourself by entering our giveaway below! And don’t forget to come back each day for additional entries!