Unless you’ve been hiding under a rock for the past decade, you’re probably already aware of the super-popular card game, Fluxx. Introduced by Looney Labs in the late 90’s, it is continuously being reincarnated under new licenses and themes. All of which can be combined with each other to create a more chaotic and massive game.

We’ve talked about a number of the popular versions in the past, including Holiday Fluxx and Firefly Fluxx. Versions that have serious educational value are regulars in our Holiday Gift Guides. Fluxx Español, Dr. Who Fluxx and Math Fluxx have been popular titles in previous years, while Anatomy Fluxx earned a top spot this holiday season. And while there have been pop culture themed versions of Fluxx in the past, none of them have excited us as much as the release of two Star Trek versions – Star Trek Fluxx and Star Trek: TNG Fluxx! 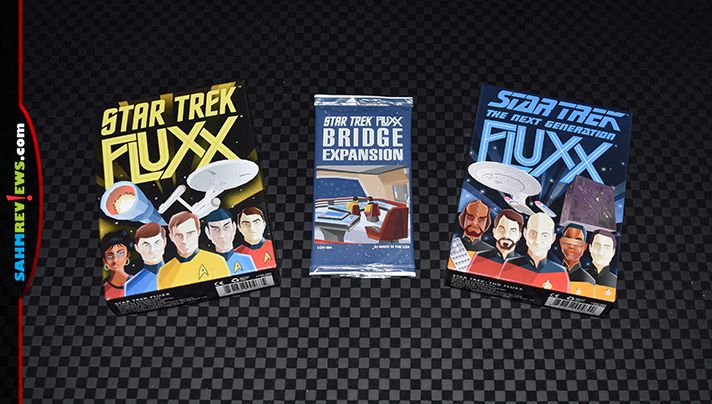 We won’t bore you with another overview of the rules as we’ve already covered them before when we told you about Firefly Fluxx and Holiday Fluxx. What we want to highlight is the depth of research that must have been done to keep these two games true to the Star Trek world. We’re HUGE Star Trek fans, having gone to conventions, collected autographs and watch every episode ever made (except for the current series that is behind a paywall on CBS Online…). So authenticity is a big thing for us and fortunately Looney Labs delivers.

If you’re even a little bit familiar with the classic series, you’ll instantly recognize most every card in the 100 card deck. Of course Captain Kirk, Spock, Uhura, Scotty, McCoy, Sulu & Chekov are represented. What we didn’t expect is that a couple lesser characters like Christine Chapel and Ensign Smith would also make the cut. Romulans and Klingons are exhibited only as a race and special mention of the computer’s voice, vocalized by Majel Barrett-Roddenberry, is a welcome homage to the wife of Star Trek creator, Gene Roddenberry. 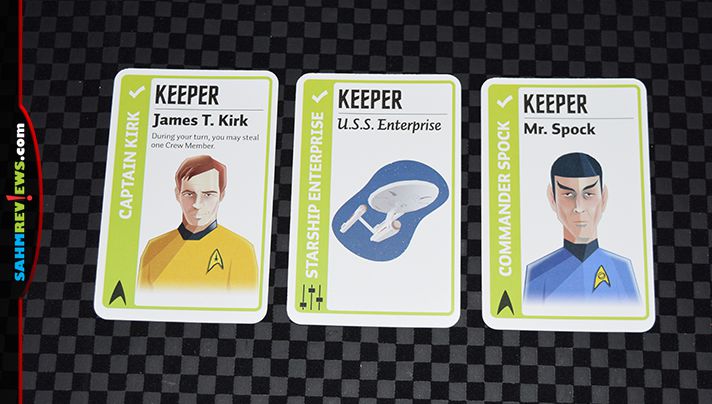 Of course, no game set in the classic Star Trek universe would be complete without Tribbles. If you haven’t seen the episode, you must stop what you’re doing and stream it now. The rest of the cards are similar to what you’ll find in other versions of Fluxx. Actions, Goals, Keepers and Rules are all present with only a couple minor changes. 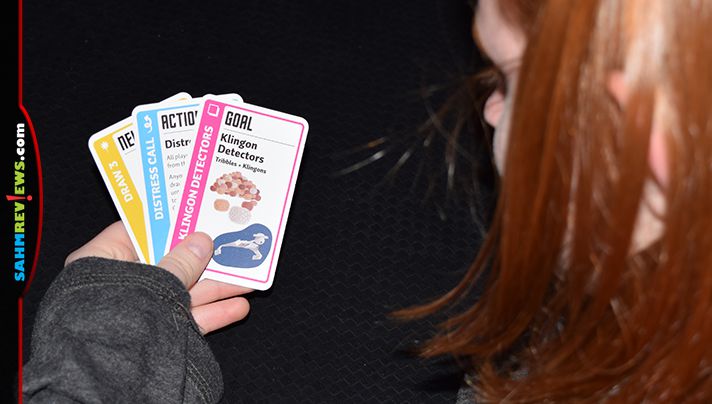 Keeper cards with the familiar Starfleet Command symbol (the arrow-like logo on each person’s uniform) may be used when a Crew Member is called for on another card. Keepers with slider controls are classified as Equipment. This means, as equipment regularly does, that it can fail. Having these two new categories of cards adds an interesting twist to a standard game of Fluxx since any matching card of that type can be used to fulfill the requirement! 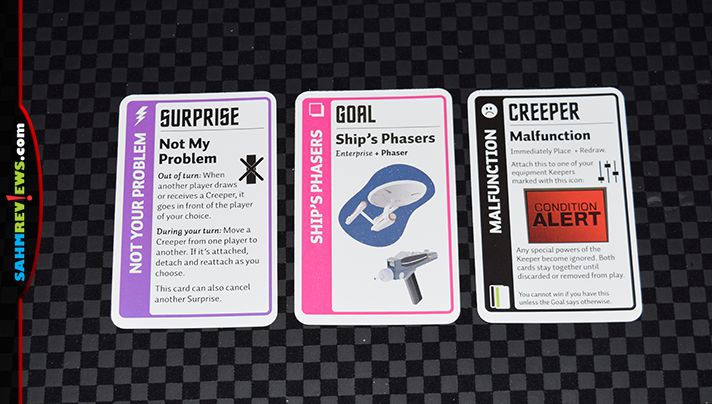 At under $20 for this officially licensed version of Star Trek Fluxx, you’ll find copies on Amazon or at your local game store.

Although we’re fans of the classic series, our heart actually lies in The Next Generation. When we think of a Star Trek captain, Picard is the first to come to mind. It was one of the first series we watched as a married couple, making sure to never miss an episode or try to record it on our VCR (remember those?!). 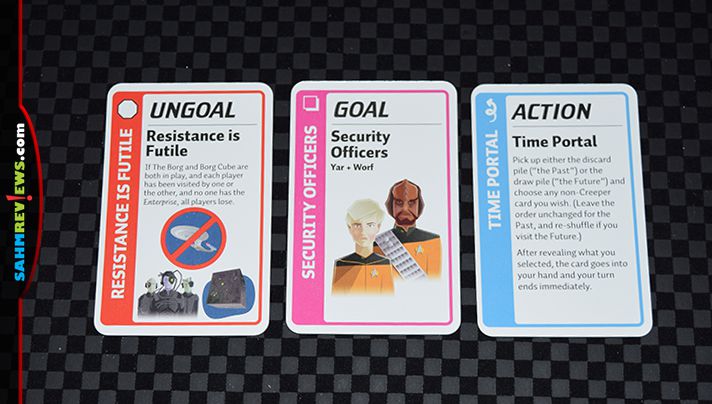 Star Trek: TNG Fluxx is similar to Star Trek Fluxx in that the special symbols are the same. Not previously mentioned are other types of cards like Creepers (opposite of Keepers – you don’t want them), Surprises (can be played at any time), Ungoals (opposite of Goals – everyone loses if its conditions are met) and Meta Rules (rules that don’t change for the entire game). 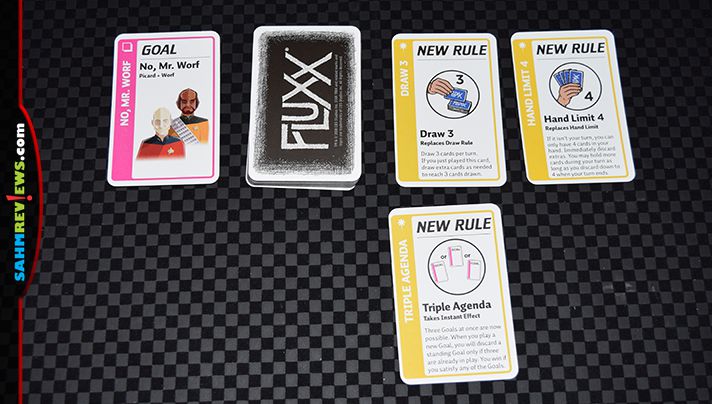 All of our favorite characters are in the game – Picard, Data, La Forge, Tasha Yar, Worf, Riker, Troi, Dr. Crusher, Guinan and even the controversial character, Wesley Crusher. Goals cover the popular events of the series like the involvement of Q, Picard being turned into Locutus by the Borg and the regular Tuesday Night Poker games hinted to in a couple episodes. Fans of TNG will be pleasantly surprised by the breadth of coverage of items from all seasons, not just the first few. 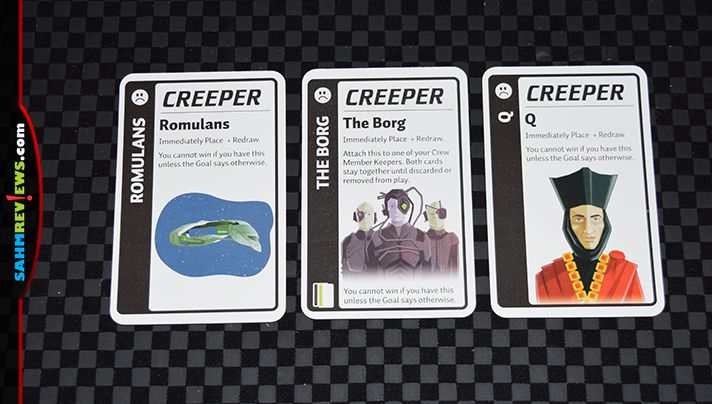 Also under $20 online and at your favorite retailer, Star Trek: TNG Fluxx is a must-have for any real Star Trek fan. And since TNG is our favorite of them all, it was an easy choice for inclusion into our Holiday Gift Guide about all things pop culture! 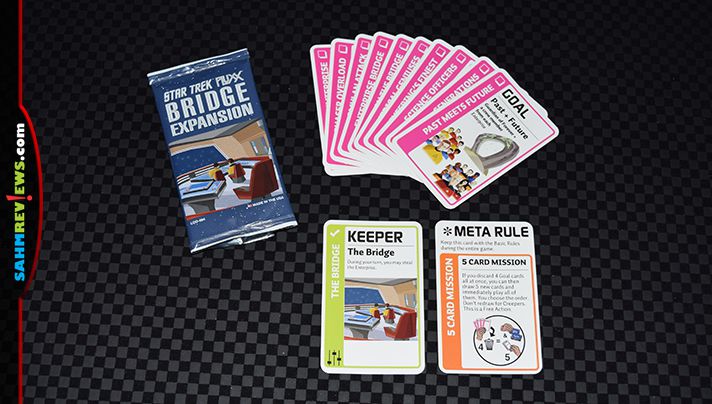 These include a new Meta Rule, the introduction of the Enterprise’s Bridge and new goals that feature items and/or characters from each version to accomplish. Although I’m not sure that Picard and Kirk would generally see eye-to-eye on most things…

We’re 100% positive these aren’t the last games you’ll see in the Fluxx line and are hopeful the Star Trek series will continue with Deep Space 9, Voyager, Enterprise and more. We’ll be watching Looney Labs’ Facebook and Twitter feeds to find out exactly what and when the next ones are coming out. In the meantime, check out their website to see all of the other amazing versions of Fluxx already in the wild!

RED ALERT! RED ALERT! Keep an eye out this afternoon as we’ll be giving away a copy of Star Trek: TNG Fluxx to one winner in our annual Mega Giveaway promotion!

Which of the Star Trek shows was/is your favorite?