I don’t think there’s anyone in the world that doesn’t like the Toy Story series of movies. Like most, I feel the first one was the best because at the time it heralded some pretty spectacular animation and special effects. It also didn’t hurt that the characters were voiced by some of my favorite actors like Tom Hanks and John Ratzenberger.

If someone asks me what my favorite scene from any of the movies was, I have to admit I enjoyed seeing Buzz Lightyear take on Woody fist-to-fist in the first film. There was something cool about seeing two favorite toys battling it out over who their owner liked best. Of course now we know all toys are loved, but in their own ways.

Bellwether Games recently expanded on the idea of toys fighting in their latest game, Windup War, where up to six players represent a beloved toy category in a fight until the last toy is standing. And if there is ever an industry award for most adorable game, Windup War is an easy nomination. 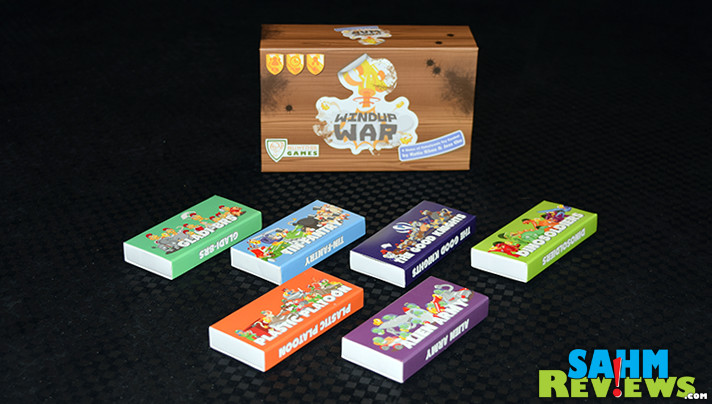 What makes Windup War so cute in our eyes? Primarily the gumstick-sized playing cards each packed inside their own matchbox-style boxes. Each player chooses one toy “faction” to play – The Good Knights, Dinosoldiers, Alien Army, Gladi-8rs, Tin-Fantry or the Plastic Platoon and takes the corresponding box and its 30 cards. 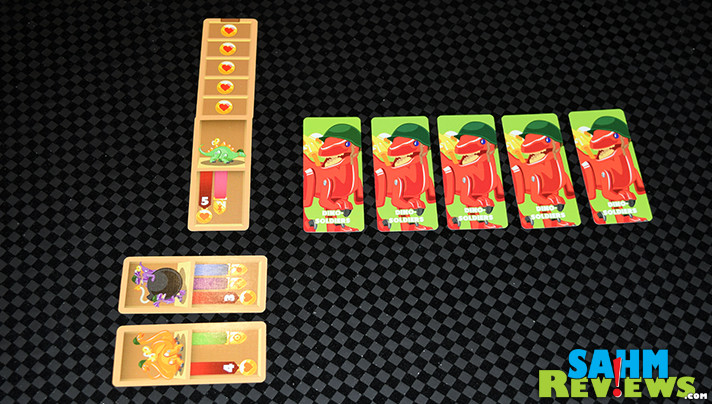 One of the cards is your Life card, which is placed in front of you vertically. From the six included Unit cards, choose three to be your army for this game. Any other units are put back into your box and won’t be utilized. Decide which order you want to play the units and keep them face-up in front of you. Whichever unit will be going first is “activated” by placing it over the Life card with the matching number of hearts depicted on the Unit card still showing. This is how you will track that card’s health points. 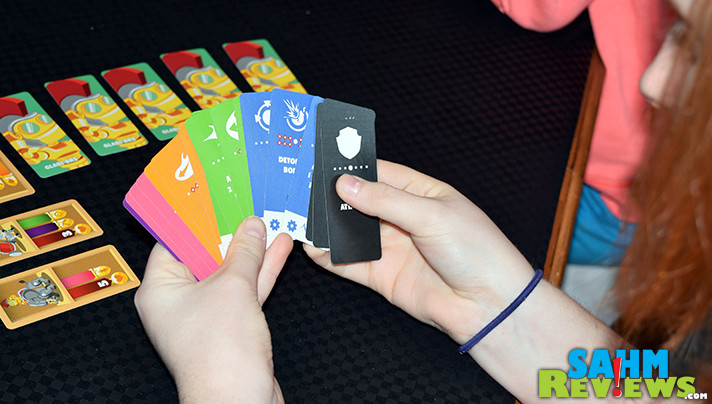 Each round of play in Windup War is split up into two parts, referred to as the Windup and the War. The Windup (like winding up your toys) has you choosing any five of the 22 action cards in your hand face-down vertically in a row next to your active unit. Order is important as they will be resolved from left-to-right. Once all players have chosen five cards, play moves on to the second phase of the round – the War. 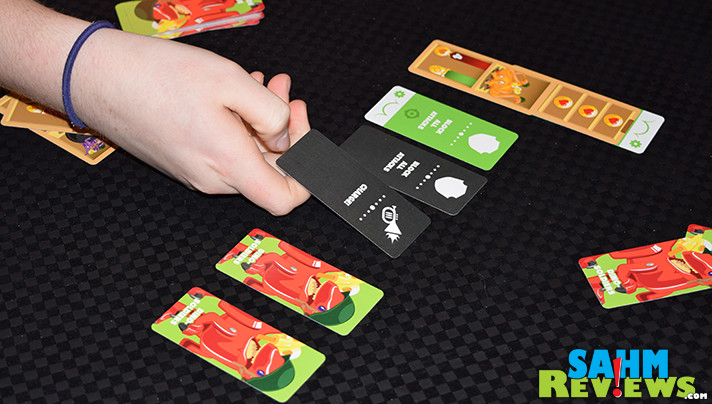 At the same time, all players flip over their first card and resolve the actions as if they occurred simultaneously. Actions vary from attacking the player on your left/right, setting a bomb, blocking an attack or even charging right in! But here’s the catch – all action cards have a colored background and you can only resolve actions that match the color of the ribbons on the card of your active unit. Each unit sports one or two ribbons, and black actions can be performed by anyone. 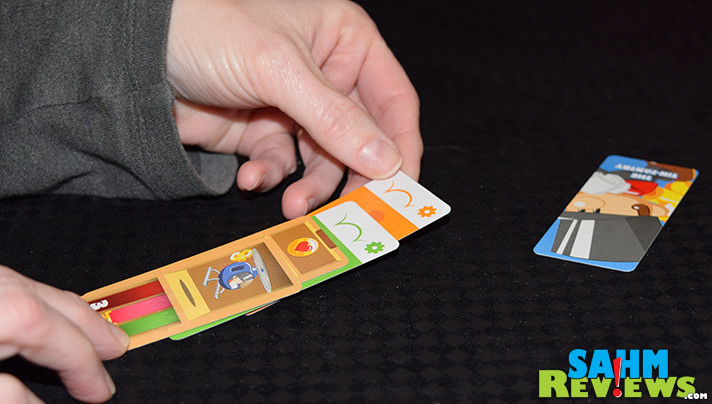 If you play a card whose color does not match, you cannot take that action and lose that turn. In addition, if someone attacks you during that same turn, you block everything. However, if you are not attacked, then you turn the card 180° so the bouncing gear is pointed upwards and place it under your Life card. It is now lost for the rest of the game. If you collect three or more gears by the end of a complete round, then you forfeit and are eliminated! 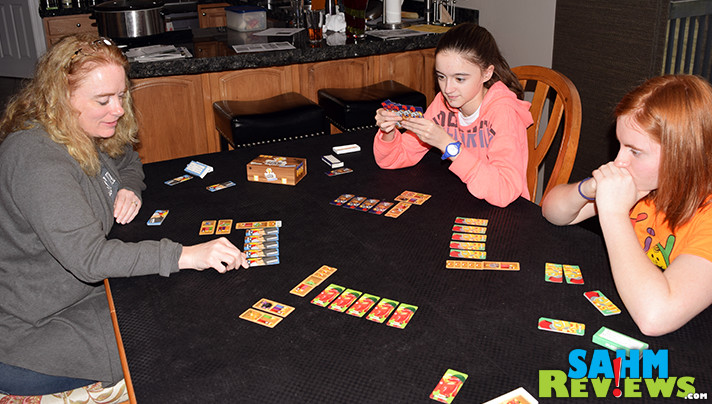 Earning gears can easily happen when a unit runs out of health. When your active unit is knocked out, the next in line moves up and takes its place. However, their ribbon colors may be different than the five cards you have already played! Careful timing of when you will lose a man is necessary to be successful in Windup War so you don’t miss out on taking actions. There are a limited number of each action color, and the only way to retrieve them from the discard pile (where they go after played) is to play the special Full Reload action. This takes an entire action turn to collect all of your action cards back into your hand. Fortunately this is a black card and can be played with any unit active.

If you play a Charge card when no one else does, you put one of your discarded cards into the center of the play area, scoring a point. If one or more other players play a Charge at the same time, they cancel each other out and no one scores. A game of Windup War ends when there is only one player left in the game or by collecting three points from successfully playing Charge cards. Expect a full game to run anywhere from 15 to 30 minutes and lots of arguments over which toy faction is more powerful (the correct answer is none of them).

Windup War is extremely affordable considering it supports a larger-than-normal number of players at around $13 on Amazon. You might remember our first feature about Bellwether Games early last year or our followup in July which highlighted The Princess and the Goblin. It is obvious they are around to stay and have a number of things in the works. Keep an eye on their social media channels (Facebook, Twitter) to find out what’s in store for them next!

What was your favorite toy growing up?