We’ve recently highlighted two companies that we ran into at the 2016 Chicago Toy & Game Fair. One was an established 3-D puzzle maker with their brand new X2 Cube. The other was brand new to the puzzle market in the U.S. but was hoping to capitalize on their success in Europe with their unique Bertikal Puzzle system.

We also ran into a number of our long-time clients and sat down and played a few rounds of whatever new games they were demonstrating. Back in the rear of the show a small booth caught my eye whose company name rang a bell. I had never had the pleasure of actually playing any of Bellwether Games‘ titles, and a couple of them caught my eye instantly. A brief discussion with the company owner and game designer, Dennis Hoyle, and I learned they not only have games currently for sale, they have a number planned for Kickstarter in the very near future!

It is now a couple months later and we’ve learned and played four of their games a number of times at home and during our weekly game nights at a local chiropractic college. These are all what we call “small box” games, meaning they are perfect for carrying along with you to a game night or travelling on vacation. With the variety in these first three from Bellwether Games, we’re positive you’ll find at least one that belongs in your collection.

Dennis’ first game, Drop Site, has no mention on the packaging of Bellwether Games at all but is on their current distribution list. We assume that as the first game by Dennis, Bellwether hadn’t been officially established at that point. They were off on the right foot as they used a high-quality casino playing card manufacturer, Cartamundi, for their production. The quality of the product is very evident. 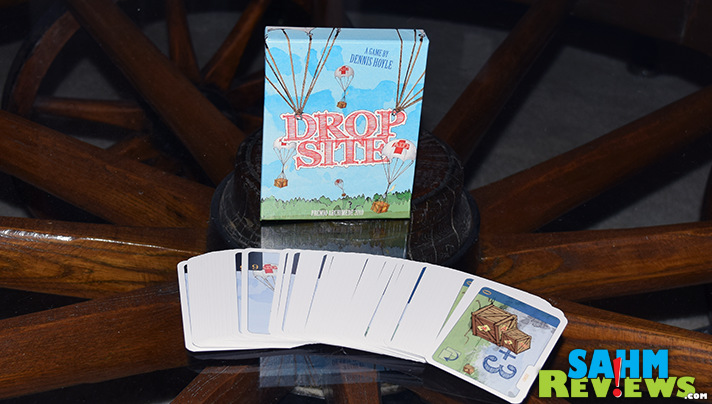 Drop Site is a card game for up to four players about delivering humanitarian aid via parachute. Each card has two numbers printed on one side. One number is treated as the card number, while the other is the value of the card in victory points if you make a match. 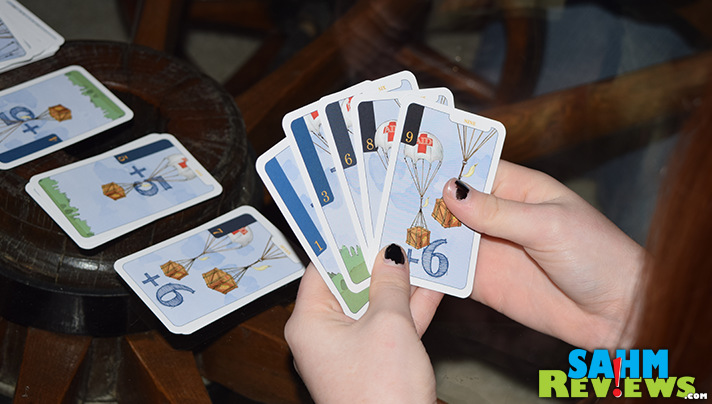 Each person is dealt a hand of five cards with the rest of the deck being placed in the center of the playing area. One card is turned face up, creating the first “Drop Site”. On each players’ turn you either play a card to an existing drop site by laying down a card with a number lower than the one shown, start a new drop site by playing any card to a new spot next to the current drop site or place a card from your hand face down into your own personal “Debt” pile. 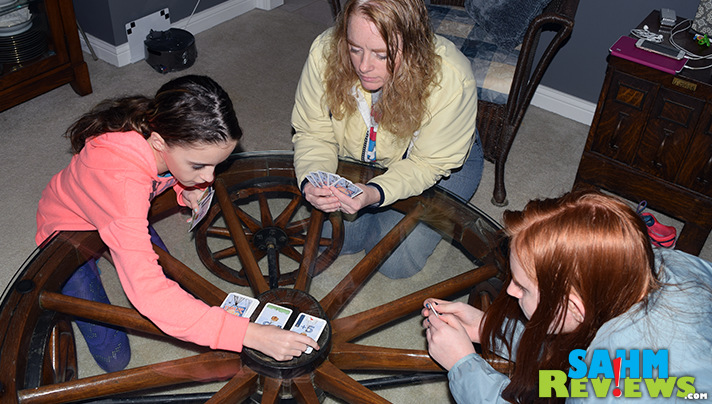 The overall object is to have cards in your debt pile match the top card on the Drop Site piles at the end of a round. A round ends when a certain number of Drop Site piles have been established (depending upon the number of players) or the draw deck is depleted. When the round is complete you receive points for every card in your debt pile that matches the top card on a Drop Site (you can match more than once). Subtract two points for each card that has no match.

There are also “zero” cards that allow you to close a Drop Site and start a new one on top of it. These zero cards can also be placed in your debt pile for possible matching at the round’s end. The game is played over multiple rounds with the first player to accumulate 50 or 100 points (players decide at the beginning of the game) being declared the winner!

Find copies of Drop Site on Amazon for around $12 or pick it up directly from Bellwether Games for a little less!

With a daughter about to enter high school and take her first chemistry course, this one certainly caught our attention. Scarily, Antidote is about a lab accident where you and your opponents are rushing to find the correct anti-toxin to counteract the deadly airborne toxin, Compound X, accidentally released when a glass container was knocked over. 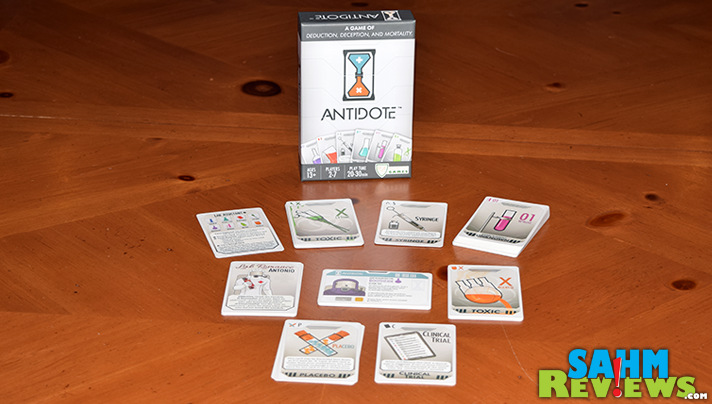 From the seven Compound X cards, one is chosen at random and set aside. This represents the antidote everyone is trying to obtain. The rest are added to the main deck of cards and each player is dealt a hand made up of numbered formula, syringe and Compound X cards. 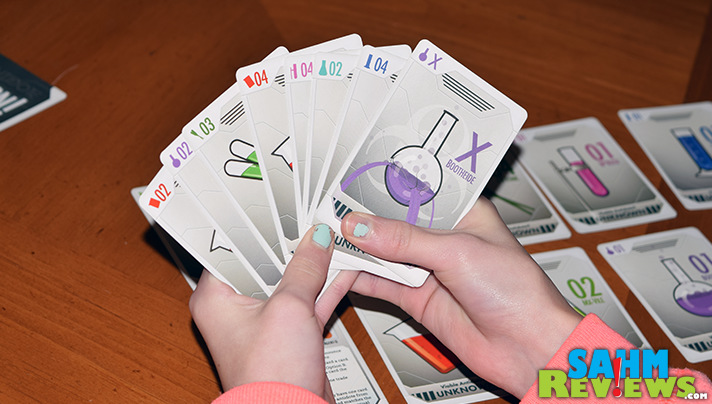 One each turn you can choose one of three actions. First, you can have everyone (including yourself) discard one card from their hand into their workstation (an area in front of them). You could also choose to trade cards by instructing everyone to pass one card to the right or left or trading one-to-one with one other player. Lastly you can play one of your syringe cards to steal a card from another player’s hand or workstation. Ultimately you are trying to guess what the turned-down card is so you can save a matching formula to be the last card in your hand. 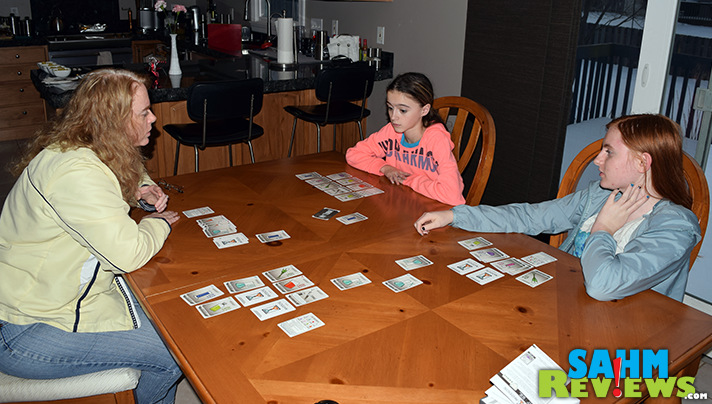 At some point everyone will be down to one card, and it is then that you ‘drink’ the formula (the last card in your hand). The Compound X card previously hidden is revealed and everyone discovers whether they drank the correct antidote. If so, receive points equal to the number on your last card. If not, lose points equal to your last card and die (but only until the next round). If your last card is a syringe, you still die and lose just one point. 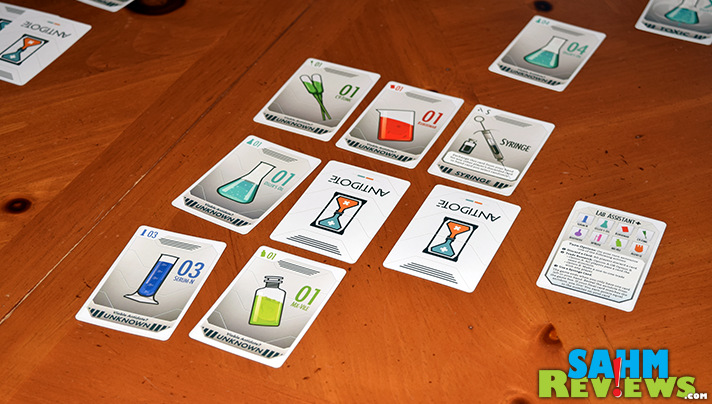 Antidote is played over three rounds and the player with the highest total at the end of the game is declared the survivor. As a bonus, this small box also includes a couple optional expansions to make the game that much more interesting. “The Placebo Effect” adds cards that act as a defense when you have cards stolen from you, cause you to draw from another player’s hand or your own workstation, or establish penalties if you or your opponents drink the wrong formulas.

“Lab Romance” adds just that to the mix – romance! Once per round you can draw a Lab Romance card which alters your win conditions. Some give you bonus points for other people living while others put you in a relationship with another player and if they die, well, you also die (of heartbreak). These add quite a bit of randomness to the round scoring and is a fun way to turn Antidote into a game about more than just guessing the right card.

Antidote is currently on sale at a discount from the normal $20 MSRP on Amazon. If they run out, you can still find it direct from Bellwether.

Bellwether Games’ third published game is another in the semi-cooperative game category. Swamped takes place in the exact place you would guess, a swamp. You and your friends have heard of a number of treasures existing in the form of rare plants and animals and are venturing out to gather as many as possible. But the swamp isn’t a safe area as there is a hungry crocodile that would love to make a quick meal of you and your crew.

Swamped cleverly uses double-sided cards that perform as an action or as an additional map piece as you venture further into the swamp. Other cards act as counters to help the group keep track of how many of an object they have collected so far. And of course there is the crocodile – his card denotes how many spaces he gets to move on his turn!

Each player is given an Adventurer Card at the beginning of the game. This assigns two different scoring goals but is kept secret from the other players. The team’s overall goal is to collect at least three samples of Kingfoil and escape the swamp unharmed. But each player has their own ulterior motives, so they may guide the boat in a direction that fits their needs, but hurts the team’s overall chances of success. 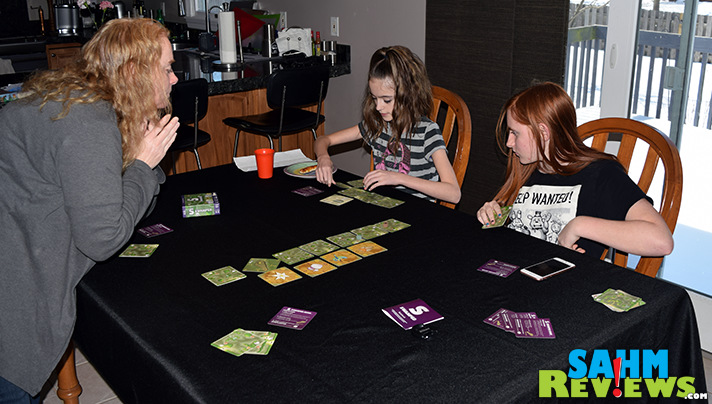 On your turn you have a choice of which type of card to play. A Coordinate Card will dictate the number of spaces each player moves and the “Let’s Move” card locks it in and begins the movement phase. Coordinate Cards may be played on top of each other as long at you are increasing the number of spaces you are moving. Playing the “Let’s Move” card not only moves the boat you are in, but gives the crocodile an opportunity to move closer as well.

Instead of playing a card, you might choose to discard one in order to activate a different selection of actions. Doing so allows you to immediately move the boat one space, rotate any pile of Coordinate Cards or pass the Pilot card (first player notation). Again, since the boat moves the croc also moves! 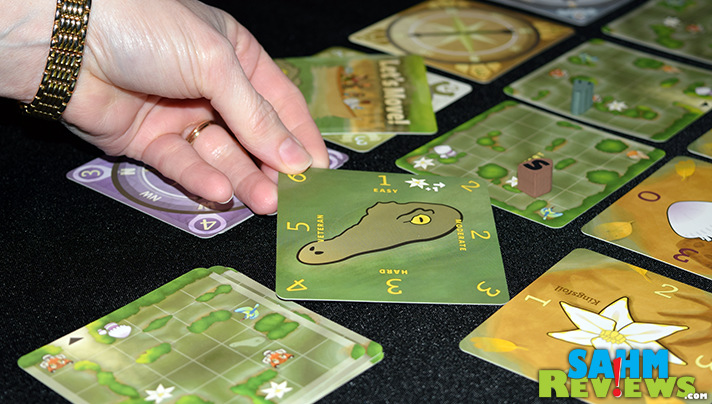 Passing over one of the treasures allows you to gather a sample and add it to your inventory by turning the associated card to the next number. Each spot may be used only once, and if collecting Kingfoil, it angers the croc and awards it with an additional space to move each turn (turn the croc card to denote its new speed). 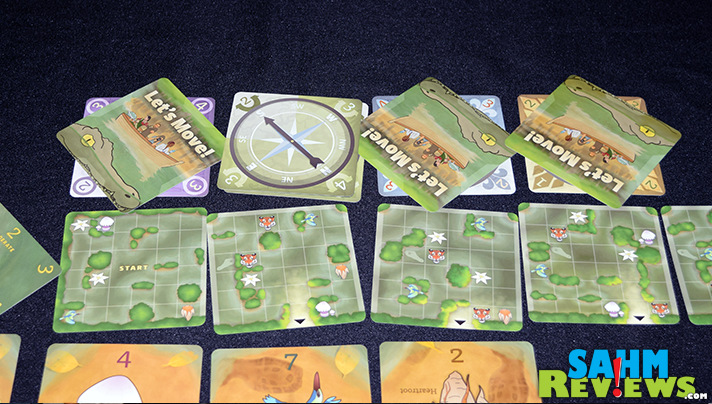 A round ends when three “Let’s Move” cards have been played and resolved. The person with the highest sum of coordinates pointing towards them is allowed to move the boat two bonus spaces and then a new round is started by replacing the Coordinate Card piles and dealing new hands to each player. Swamped continues in this manner until the group either escapes the swamp with at least three Kingfoil or the crocodile catches up to the boat. In that case, everyone loses!

Upon success, scores are tallied based upon everyone’s individual goals set by their Adventurer Cards, using whichever yields the highest result. The person with the highest score wins with any ties being decided by the Pilot at the end of the game.

The Swamped box, like the previous Antidote, also includes optional expansions to make the game more involved. The Waterfall Card is added to the map and draws the boat towards it unless you have the movement speed needed to escape the current’s pull. Swamp Tigers have cards that when played might make the group lose treasure. This can be handy to slow down another player who is collecting a treasure you do not need!

There’s a lot of game in the Swamped box, yet the price is still an extremely affordable $15 on Amazon or direct from Bellwether Games.

If you like what you see so far from Bellwether Games, we have more in store for you in the very near future. They have a fourth title out called The Princess and the Goblin, which we’ll talk about in a month or two, and an expansion to the above-mentioned Antidote currently running on Kickstarter for only $9! This adds additional players, new expansions and more! Be sure you’re following them on Facebook and Twitter to learn more!

Which of these three game themes interests you most?