When we started attending our weekly game night, it wasn’t uncommon for people to shy away from participating in games when one of our girls were already seated at the table. Those who were unfamiliar with their gaming background didn’t understand that they were capable of playing in-depth strategy games. There were a few people who wouldn’t care and would gladly accept them as contenders and those individuals were the ones who became the biggest non-family advocates for our kids. If someone was debating whether to pull up a chair at a game with one of our kids, one of those people would encourage them with comments like, “They’re ruthless.” and “Be careful. They don’t play like kids.”

These had become our friends. They were trying to give our kids a boost of confidence to play against strangers while at the same time encouraging opponents to play the game as they normally would. It was a win/win situation. I fondly remember those early days and smile at the pride those comments offered all of us. It wasn’t until we were attending Geekway to the West when a stranger approached us to share her opinion that I really recognized the strengths that playing games was instilling in our girls.This woman was running some of the tournaments, a few of which the girls both participated in. As a result, she was able to see the girls in action. Their play styles and tactics as well as how they held themselves against older competitors. She proudly told me how much she enjoyed watching them and how they didn’t let anyone push them around or make them second guess their actions. She said a couple of the adult men were trying to tell them how to play and they nonchalantly said they didn’t need any help. One of the tournaments was Dimension game from Thames & Kosmos. This wasn’t their first rodeo. They kicked butt playing it at Geekway the prior year. 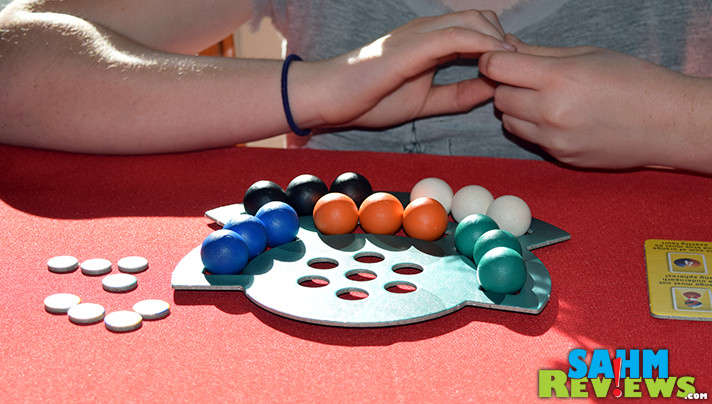 As many times as the girls have played, I personally hadn’t tried it. Now that I have, I can’t believe nobody told me how much I would like it. It’s a 3-D puzzle game that can be played solo or against up to three opponents! Did I mention it is also a speed game? Although that’s usually a pitfall for me, in this case it really worked. Maybe because my most recent comparison is to Paramedics Clear! Anything feels calm after that heart racing game! 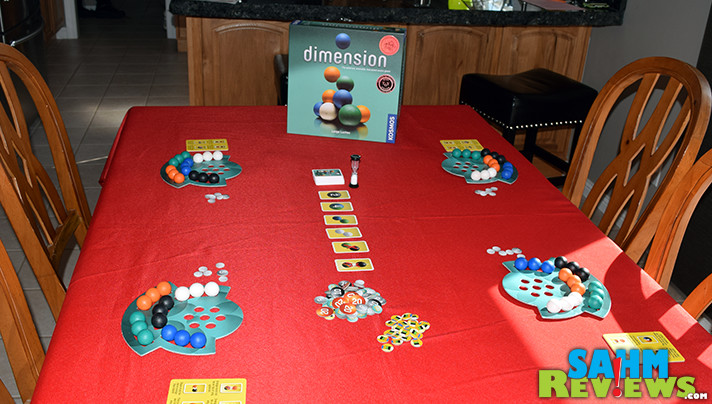 The setup is easy. Each player takes a game board and three of each color sphere. In addition, players each start with ten point tokens. In the middle of the play area, place the timer, a general supply with point tokens and bonus tokens as well as the deck of task cards. 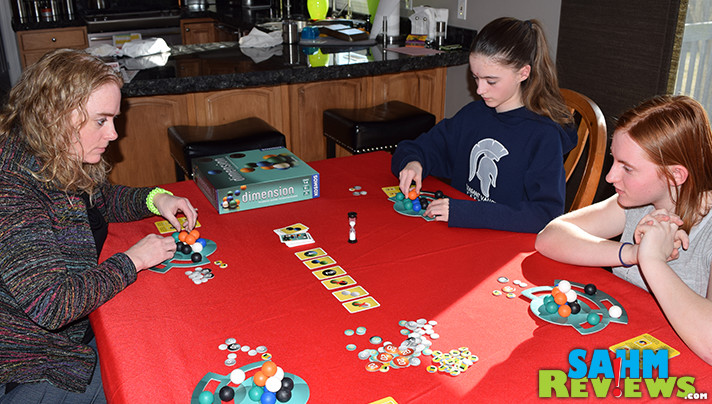 Play takes place over six rounds. At the beginning of each round, draw six task cards from the deck. Make sure they are visible to all players and briefly go over their requirements before beginning. You’ll be working at the same time as your opponents when the timer is flipped. Your goal: Stack as many spheres as possible on your individual play area. The catch? They need to follow the “rules” outlined on the six task cards. 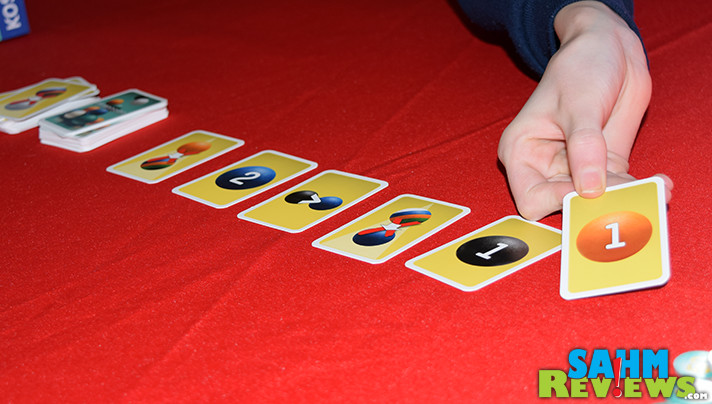 Therein lies the puzzle aspect of this game. There are seven different types of rules including using a designated number of a particular color (or combination of colors), whether certain colors can (or cannot) touch each other and whether a color can only be stacked above (or below) other spheres. 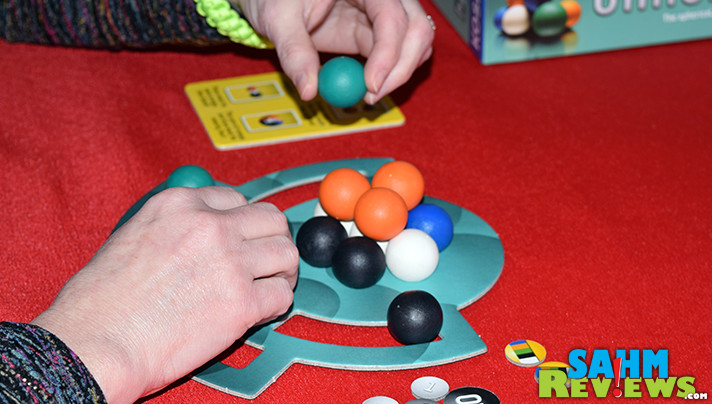 When the timer stops, the round ends and points are tallied. You earn one point for each sphere placed onto your tower. Then, one by one, the task cards are compared to each players’ stack. If you completed the card, great. If you were not able to complete it then you lose two points. The task needs to be completed in full for each sphere placed that meets it, not just one. As an example, if the task card says you must place black spheres next to blue ones then every black sphere must be touching a blue one and every blue one must be touching a black one. 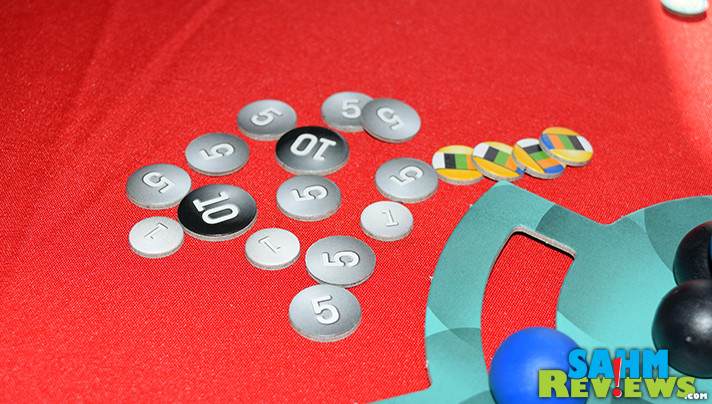 If you are able to complete all six task cards successfully AND use all five colors in that round, you earn a bonus token. The spheres are returned to their slots, six new task cards placed and the timer flipped for another round. After six rounds, points are tallied. You’ll earn or lose points based on the total number of bonus tokens you received. After that, the player with the most points wins.

The game isn’t difficult to learn and is very quick to play thanks to the included timer. While it is a speed game, it isn’t high stress. The puzzle nature makes it competitive yet relaxing. I can definitely understand why the girls like it so much and why they do so well playing it in tournaments! If you think you can stack up to this challenge, you can pick up a copy from the Thames and Kosmos website or from Amazon for around $36. They continue to release a variety of quality games as well as educational and engaging toys and kits. Round out your news lineup by following them on Facebook and Twitter.

What is your first thought about playing games with kids you don’t know?