We stopped by the store the other day to pick up a bag of safflower seeds. All winter long I kept the bird feeder filled with sunflower seeds and had a regular stream of chirping visitors. But when the weather starts to warm up, we see an influx of aggressive birds that push out the finches, cardinals and woodpeckers and leave us with a less than appealing view. While I tolerate red winged blackbirds, I draw the line when the starlings infiltrate the feeder. Hence the need for safflower seeds; the mean birds don’t like them. They’re quite a bit more expensive, but I’m usually able to get away with only one or two bags before the starlings move along to a feeder elsewhere.

Each year, I enjoy the birds more and more and continue to add feeders to my yard. I’ll lean over the kitchen sink and peer out the window and take in all the beauty that nature has to offer. The last few years we’ve even had different hawks visit! (Maybe someday a Bald Eagle will show up!) It’s breathtaking and I often lose track of time watching the various birds feast on what we have to offer. Of course, they aren’t there all day and all night. Sometimes we shift gears and watch birds on the kitchen table instead. With Seikatsu from IDW Games, we can add four types of birds we don’t normally see around here: Scarlet Tanager, Japanese Waxwing, Japanese White Eye and Japanese Paradise Flycather. 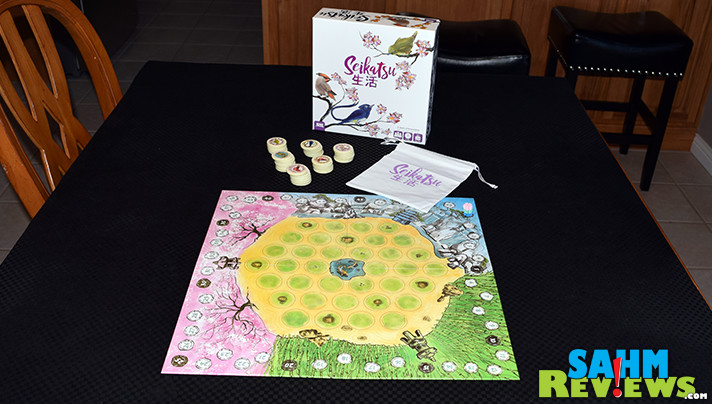 With Pagodas, birds, flowers and even a Koi poind, this Japanese garden-themed game adds some beauty to game night. Similar to Topiary, the goal is to have the best view of the garden. Of course, it’s all a matter of perspective and the angle you have will dictate what you can see. The game includes a game board, 32 garden tiles depicting birds and flowers, 4 Koi pond tiles, scoring markers and a cloth bag. While the game notes that it can accommodate 1-4 players, it’s best played with three. Setup is quick. Place the board in the center of the table and place the scoring markers on the “0”. Rotate the board so each player is facing a Pagoda. Put all the Garden tiles in the bag then randomly draw 3 and place in the designated spots in the center of the board. Add the Koi Pond tiles to the bag, mix and you’re ready! 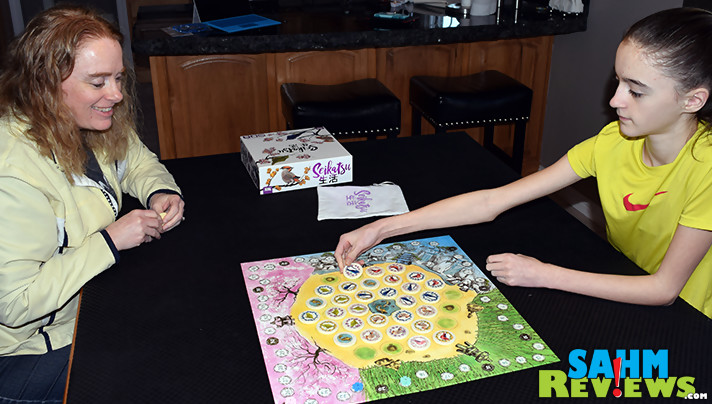 Each player begins with two randomly selected tiles from the bag. Be sure to keep these secret! Starting with the first player and moving clockwise, you’ll take three steps. Play a tile, score matching birds then draw a new tile. The game will continue in this manner until the entire board is full. Before we go any further, it’s important to know how scoring occurs because it will impact where you choose to place your tile!

There are two ways to score points in Seikatsu: birds and flowers. Birds are scored in the previously mentioned second step of each player’s turn. When you place a tile next to an identical bird, you form a Flock of Birds. You score one point for the bird on the tile you just placed in addition to one point for each matching bird in an adjacent tile. The Koi Pond tiles are wild and count as a bird of your choice, but only on the turn they are placed. After that, they’re just a pond until end game scoring when it becomes wild again, but this time as a flower. The second scoring takes place at the end of the game when your evaluate your view of the garden’s flowers. As you stand in your Pagoda, you’ll look down the various rows and count the number of each type of flower in each row. There are four different types of flowers (Primrose, Plumeria, Tulip and Bluebell) and you’ll score from 1 to 21 points PER ROW depending on how many the largest flower set is, keeping in mind that Koi Pond tiles can be whichever flower you choose. Since each player has a different vantage point, these scores will vary from player to player. 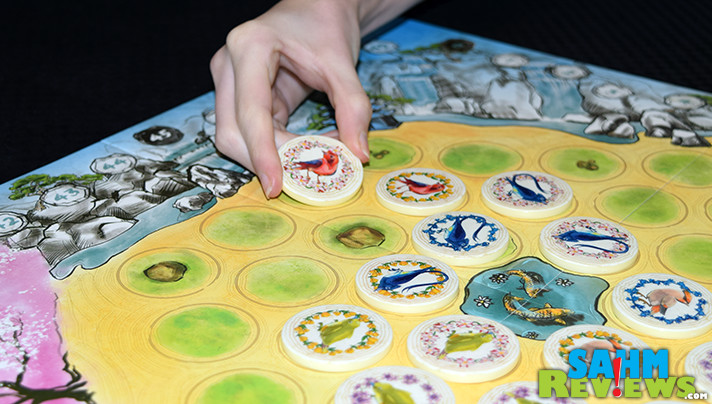 So back to first step: Play a tile not only to maximize the points scored by creating flocks when you place it, but also to create the best combo of flower points at the end of the game. Not only will you have to look at how you’re placing a tile for your own point scoring, but also how you may impact (positively or negatively) your opponents. 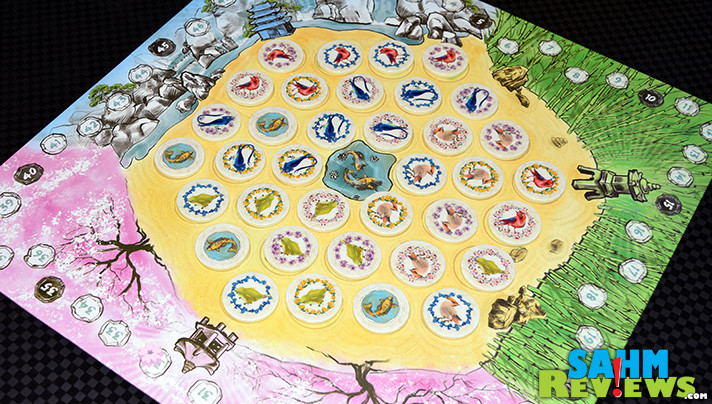 In a 3-player game of Seikatsu, you’ll have 11 turns with each player scoring individually from their respective Pagodas. In 2 and 4 player games, only two of the Pagodas are used. The 4-player game is the same as the 2-player, except as teams. While the game says it’s for ages 10 and up, we can easily see this being played by younger kids, especially if their first game is as part of a team. With beautiful artwork and acrylic tiles (no cardboard chits!), Seikatsu is another example of a great family game from IDW Games. They continue to impress with licensed games such as TMNT, Planet of the Apes and their ATARI line (we’re waiting for Missile Command!) but also have many others in the pipeline. Keep an eye on their Facebook and Twitter channels for details then stay tuned for more features here! It’s available on Amazon for around $27, but there’s still time to enter to win a copy of Seikatsu in our 150+ Days of Giveaways so head over to this post to enter!

What birds do you most enjoy watching?