One thing I don’t really miss about living in California is the amount of yard work we had to do at our house. Granted, the lots were smaller than here in the Midwest, but the expectation of quality was much higher. Most neighborhoods had a homeowner’s association that monitored grass height, what plants you were planting and how quickly you raked up your leaves. We still keep on top of those things now that we’re in Iowa, but there are a few times we let the chores pile up when we’re on vacation or travelling to a convention.

At our last house we inherited a large, custom-pruned brush prominently placed at the front of our property. It had been cut to resemble an outcrop of mushrooms with three huge domes. It was then I learned there was a term for this type of creation – a topiary. And it was up to me to keep it trimmed and shaped, a task that had to be done almost monthly. Sometimes it could be done with hand clippers to take care of the fast-growing branches. Other times the electric clippers were needed to give the entire bush a full trim. All so our yard didn’t look worse than the neighbors’.

Those days are behind us, but that doesn’t mean we didn’t enjoy looking at all the interesting creations people made out of their bushes. There are a few houses around here that have spiral topiary along their front walk. Alas, those are the exceptions, not the rule. 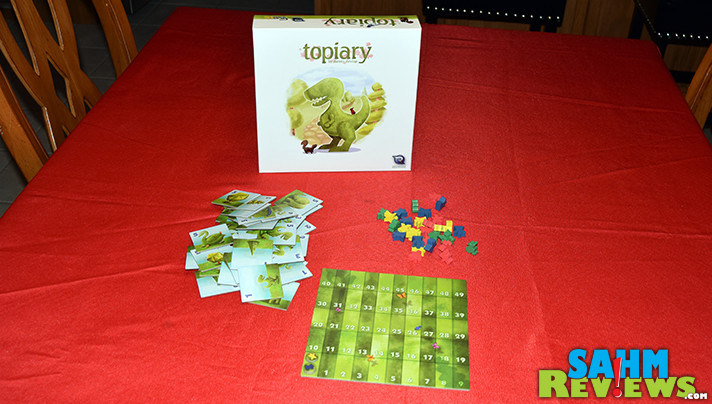 We found a way to get our observation fix in the form of a brand new game by Renegade Game Studios which is appropriately named “Topiary“! In it you are a group of people who have traveled to the new topiary garden on the edge of town to see the wide variety of shaped botanicals. You only get one look, so positioning yourself to get the best one is the way to win a round of Topiary.

Each player receives a set of custom-shaped meeples of one color, with the number determined by how many players are present (up to four). A randomly-generated play area comprised of 25 tiles are laid in the center of the play area and three additional tiles are dealt to each player. Any leftover tiles are returned to the box and will not be used. The center tile is revealed and the person who most recently trimmed a real plant gets to go first! 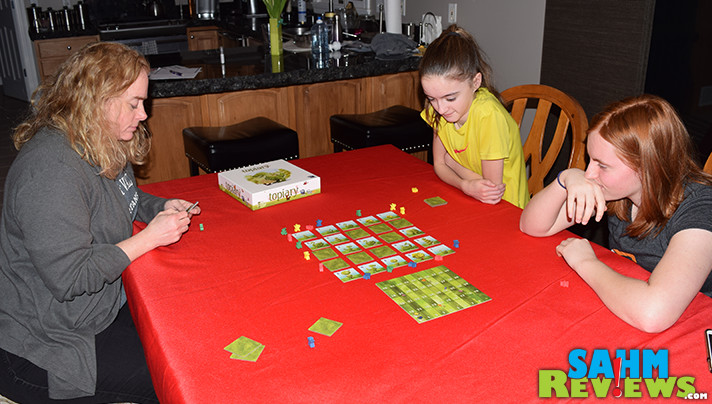 Topiary is extremely simple to learn, but as you’ll soon see, your choices are key to your success in the game. On your turn you simply place one of your meeples on the edge of the play area next to a row, column or diagonal. This represents the position the visitor is taking at the garden and they can see down only that row, column or diagonal. Your goal is to position them so they can see as many as possible, taking into account the height of each topiary. 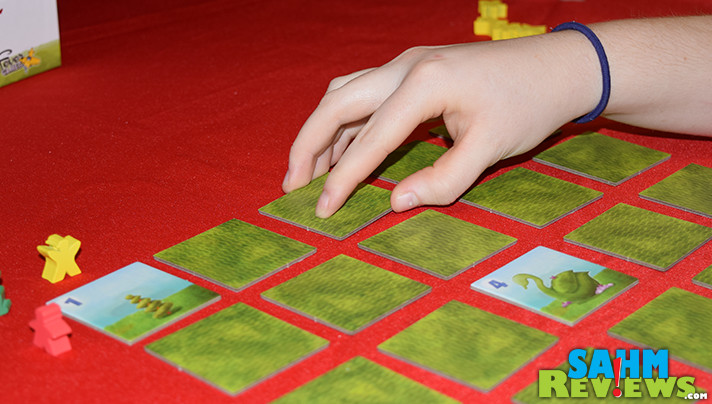 The tiles are numbered one through five, which represents the plant’s height. When you place a meeple you have the option of picking up one of the unrevealed tiles in their sight line, placing it in your hand and then playing one of your tiles (including the one you just drew) face-up into the empty space. You want to place shorter bushes closer to your viewer while saving the distant spaces for taller plants. 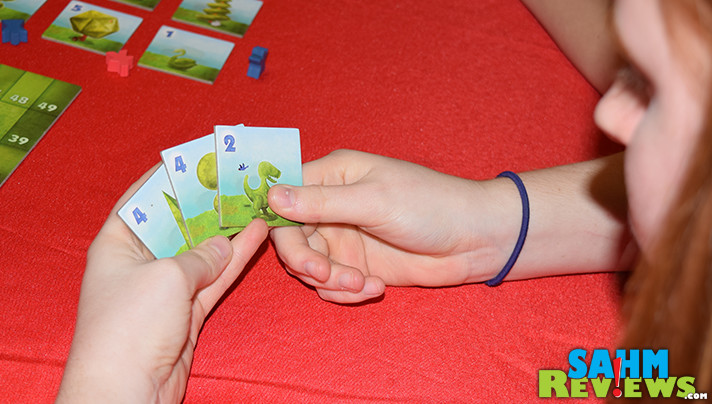 You can only see topiary that is taller than the ones in front of it, so a perfect line would be a 1-2-3-4-5. As an example, if your lines ends up as 1-2-2-4-3, you would only be able to see the 1, one of the 2’s and the 4. The second two is blocked by the first two, and the three is hidden because the four is in front of it. At the end of the game this would be worth seven points, the total sum of the visible topiary. However, a viewer positioned at the opposite end would also be able to score seven as they can see the 3 and the 4, but no more! 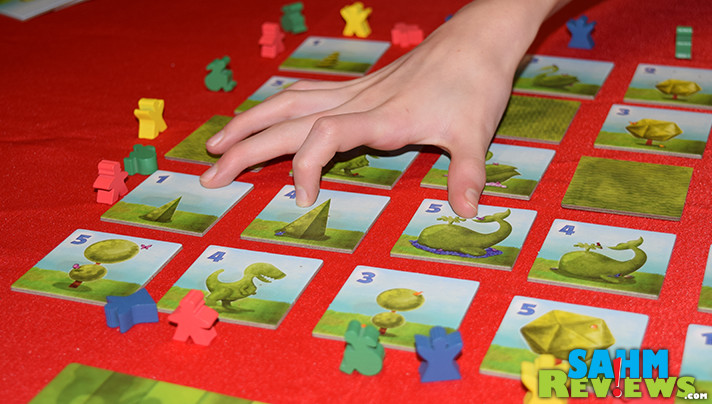 Players take turns placing one meeple and optionally revealing a new topiary to the board. You’ll want to keep in mind that changes you make to increase your score might also help other players who intersect with the tile you’re about to play. You can strategically place plants to break up a player’s sight line or to prevent them from planting in the same area on their turn. 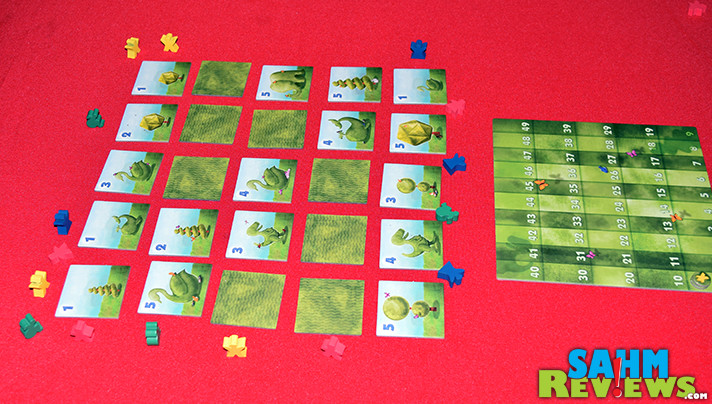 A typical game of Topiary lasts only 15-30 minutes since turns are rather quick and the number of bushes are limited. Once all viewers have been placed, final scores are tallied. Each meeple is resolved using the scoring method noted above and bonuses are awarded for having multiples of the same shape within your sight line (one point each). Additional points are earned for the three tiles in your hand at the game’s end if you have a matching shape of a greater height within one of your sight lines! The player with the highest total wins Topiary! 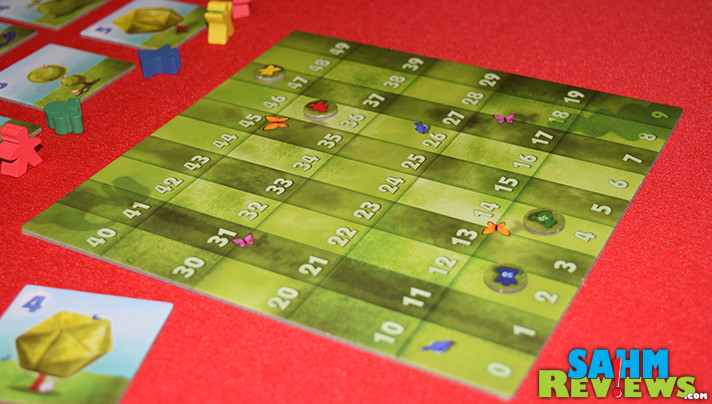 At well under the MSRP of $30 on Amazon, Topiary was very easy to learn, teach and play. The box recommends ages 10+, but we feel this should be considered for ages as young as six. A very family-friendly theme with just the right amount of “take that” as you foil another player’s line-of-sight plans, Topiary is a great value and very good for introducing classic game players to this new world of hobby games.

As always, keep an eye on Renegade Game Studios’ Facebook and Twitter timelines for up-to-date product announcements, including an intriguing International Tabletop Day exclusive, Wonderland! It looks to be a cutely-done 2-player card game where you can play as either the Red Queen or Alice!