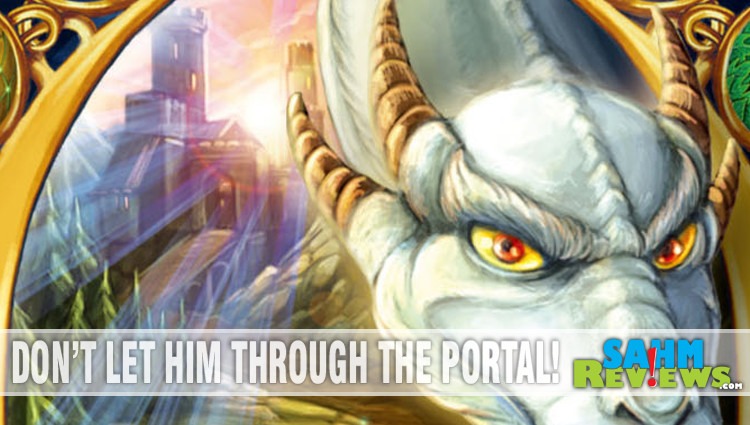 As a family, we’ve been into hobby board games for quite some time now. I remember one of our first experiences with something other than Monopoly or Scrabble. We were in Chicago for the annual Chicago Toy and Game Fair and noticed the huge booth at the front run by Mayfair Games. They were holding a regional qualifier for their annual Settlers of Catan tournament. The winner won some cash and an entry into the National Championship held at a later convention.

Fast forward many (many) years and Catan is now a company of its own, and Mayfair Games continues to put out a wide variety of titles for every preference. When we’re looking for a game to introduce people to this corner of the market, Costa Rica is still our go-to game. If we’re looking for something a little meatier (and longer), both Agricola and Grand Austria Hotel are family favorites. But this time we discovered a new issue that is quite different from the ones we’ve talked about so far. Mayfair Games’ brand new Portal of Heroes is an inexpensive card game that certainly fills a void in their game catalog. 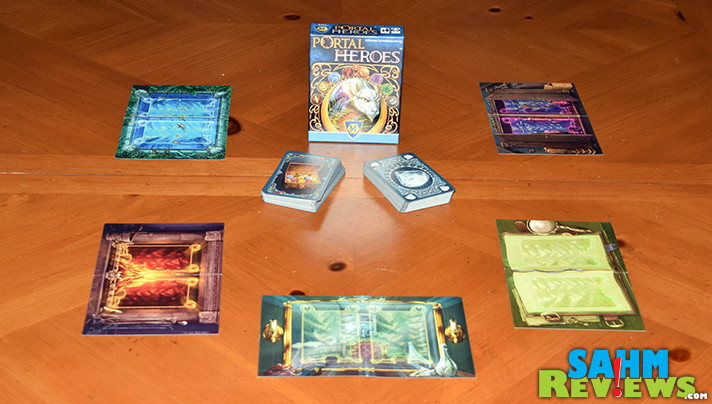 Ringing up at under $15 on Amazon, Portal of Heroes is a fantasy-themed card game for two to five players, where you take on the role of a hero who enters the house of an old man. Stories are this man was some type of magician, and with the discovery of a number of portals inside his residence, you have no doubt that the tales are true. You are competing with the other heroes to bind fantastic beasts, pulling them through the portal into your world, and using their bonus abilities to be the first to collect twelve Power Points, ensuring your position as “The Chosen One”. 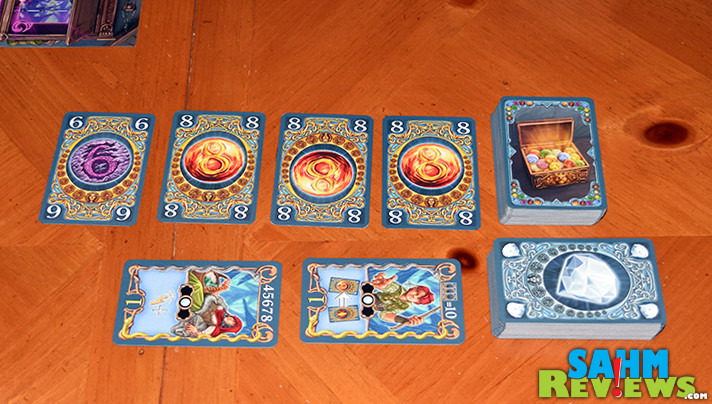 Included in the travel-friendly box are two custom decks of cards and five player portals. The deck of Pearl Cards are numbered from one through eight for a total of 56 cards. The Character Card deck represents the beasts you are trying to capture and use to become more powerful. To set up the game, the decks are individually shuffled, four Pearl Cards are dealt face up to the center of the table, along with two of the Character Cards. No cards are given to any players, and the remainder of the decks are also set in the center as draw piles. 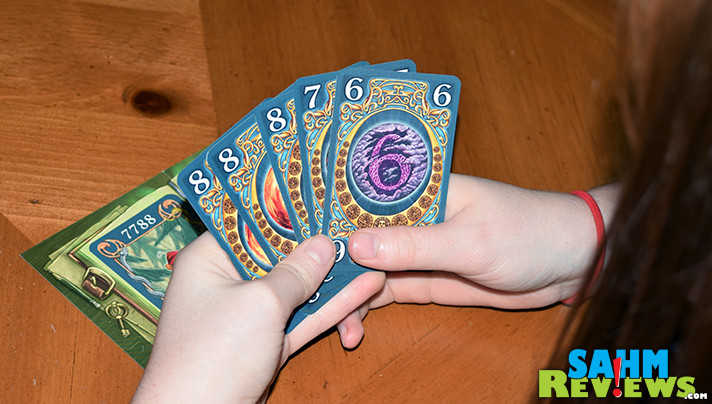 On each person’s turn, they may take up to three actions from a pool of four choices (and may repeat an action if desired). The first option is to simply take one Pearl Card, from either the top of the deck or one of the four face-up cards. Another option is to elect to discard all four face-up cards and draw four new ones. 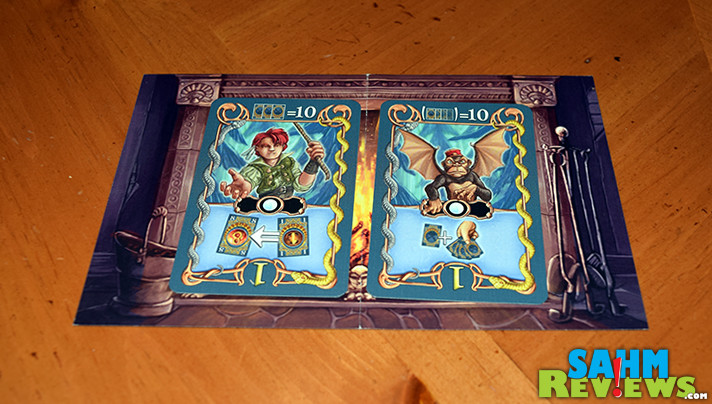 If there is a Character Card you think will be easy to activate, you can choose to put one (from the draw deck or the two face-up cards) into one of the empty spots on your player portal. The last possible action is to activate a character already in your portal. 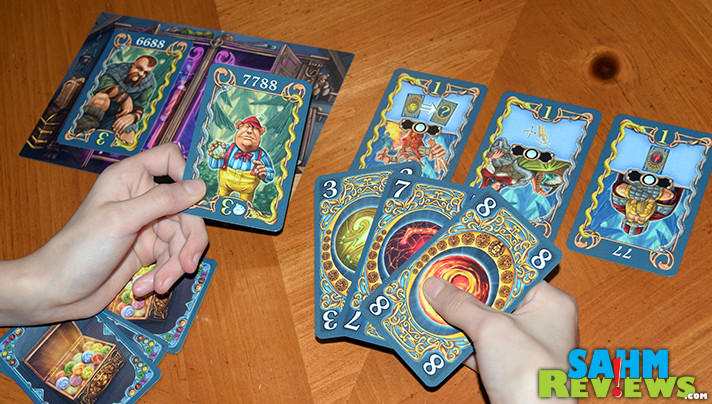 In order to activate a character, you must play a certain combination of Pearl Cards from your hand. Each Character Card has a different requirement and is denoted on the top of the card. Some have numbers, simply requiring those numbered cards to be played. Others might require two pair, three-of-a-kind or even any number of cards as long as they add up to ten. 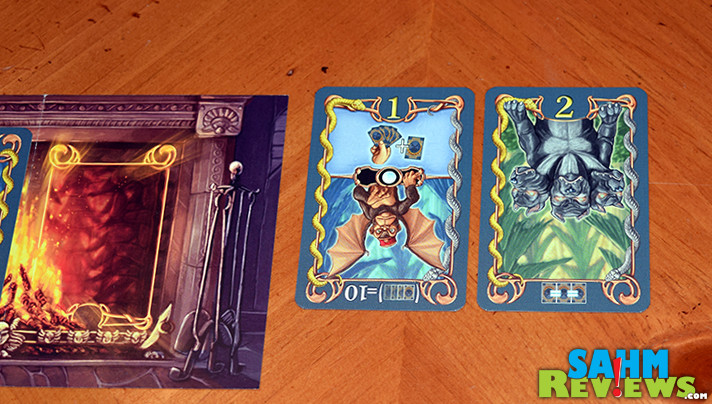 Once a Character Card is activated, it is removed from your portal, flipped 180 degrees and set to the right of your portal. If the Character Card has a red-background ability, it is used immediately and only once when activated. A blue-background ability also takes effect immediately, but lasts permanently. Depending on the ability, it may be used before your turn’s first action, at any time or after the last action. A handy moon symbol on the card will remind you when the right time to utilize it is.

Activated characters also give you Power Points and Diamonds. Power Points are what you are after to win the game (remember, collect twelve to win), while Diamonds are an alternate currency to be used to alter the value of your Pearl Cards. Taking the same number of Character Cards from the draw pile as Diamonds awarded, place them to the left of your portal, face-down. These can be spent when activating a future Character Card by increasing the value of a card by one. You cannot use it to decrease the value, nor may you use more than one Diamond on one Pearl Card. 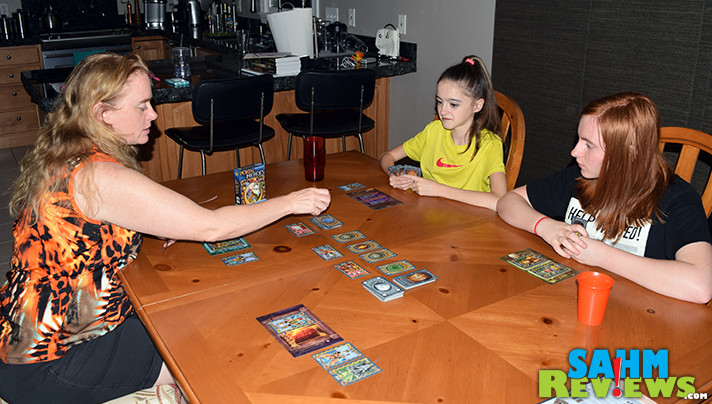 When a player triggers the end of the game by collecting their twelfth Power Point, the current round finishes so everyone has an equal number of turns. Then one more round is played out, with the person with the highest number of Power Points at the end of that round winning the game.

Portal of Heroes is the second game from Mayfair Games we’ve discovered that has a huge amount of game value in a small box. Oh My Goods ranked up there as one of the most complex small-box games we’ve ever encountered, and Portal of Heroes will also stay in our game bag as one that is easy to teach, yet offers much more than a standard game of Hearts or Rummy. A little bit of randomness with card drawing, but a whole lot more strategy in knowing which character to collect and when to give up on them.

What’s next from Mayfair Games? Tune into their Facebook and Twitter timelines as they introduce some new titles just in time for convention season. We have our hands on one of their newer bigger-box games, Bärenpark, and will be telling you all about it shortly. That is, after I finally win a round or two!

Do you enjoy unique card-only games like Portal of Heroes?