With some 3,000+ games in our collection, you could say that Scott and I have played a few. While there are types of games I prefer, I am always willing to try new ones. Even as a seasoned gamer, I see how people can easily feel overwhelmed at the challenge in venturing into modern board games. What many don’t realize is that even players who are accustomed to advanced games can feel anxiety sometimes. Someone skilled at chess is able to foresee their next several moves. Not me. It can take me longer than many people to make my decisions, but I eventually get there. I can think of multiple times where I felt seriously outmatched by my opponents only to discover during end of game scoring that I managed better than I had realized. But last weekend I played a game that broke me. The anxiety from the realization that I didn’t have a grasp of the game overwhelmed me and it was incredibly obvious to everyone at the table. Thanks to some comical commentary from Scott, I was able laugh through the tears and forge onward.

And we were only about 4 turns into Pipeline from Capstone Games when all this happened. 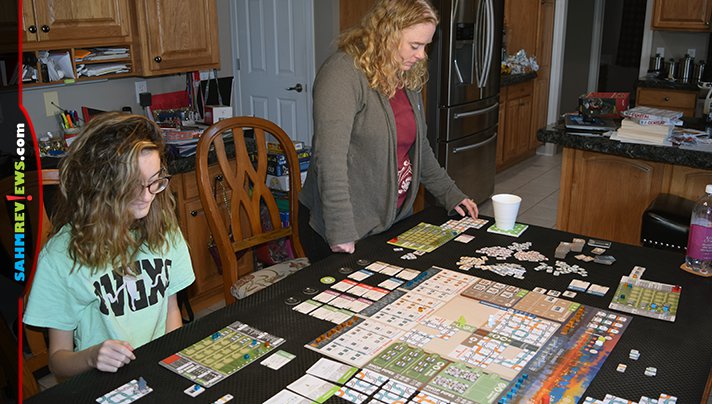 Let me tell you about the game then I’ll finish up with some final thoughts. Pipeline has several different things happening in the game that make it layered with complexity. There’s action-selection where you have a specified number of possible actions you can take on your turn. It involves commerce where you need to buy and sell goods, fulfill contracts and manage inventory levels. You can also put your puzzle-building skills to work as you create a grid of pipes that are used to refine your oil into a better quality product. It’s an efficiency-builder and a puzzle and… and… and… it’s a lot. 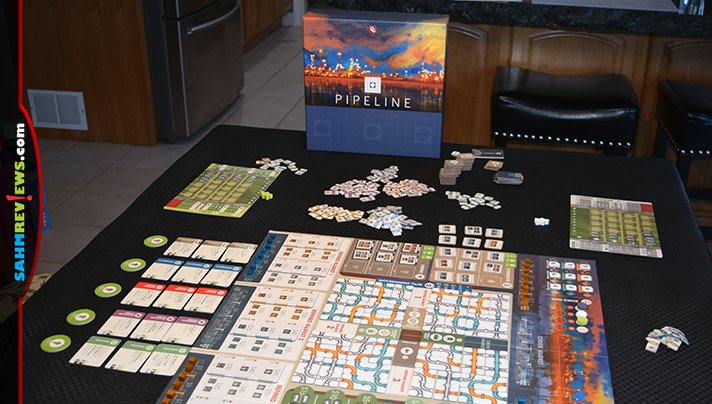 Setup involves placing the main game board in the center of the table and giving each player their own individual board, player pieces and starting cash. Begin by populating the main board with pipe pieces, tanks, machines, contracts, orders and oil. Each player board will include holding tanks. Upgrades are selected at random and placed alongside the board. A general supply of money is established as well. 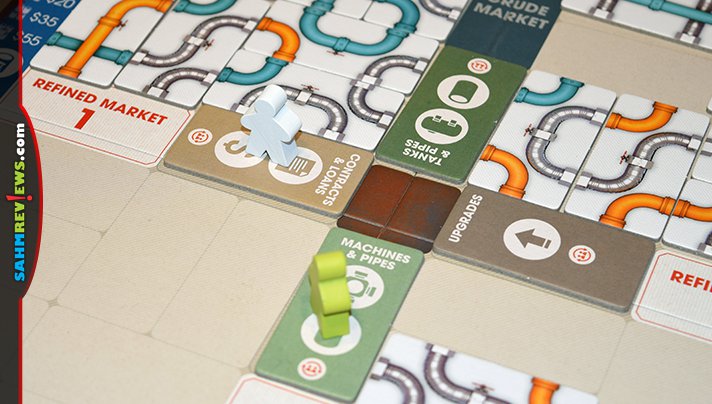 The object of the game is to have the most money at the end of three years. You’ll earn money selling oils of different quality levels and fulfilling contracts. If you’re able to partially or completely fulfill a contract, you get paid.  Fail to complete a contract by the end of the year and you’ll be penalized. That’s the basis, but a whole lot has to happen to get to the point that you can do it. On your turn, you can take one of several actions either on the main board or on the pipeline tableau that you build alongside your player board. 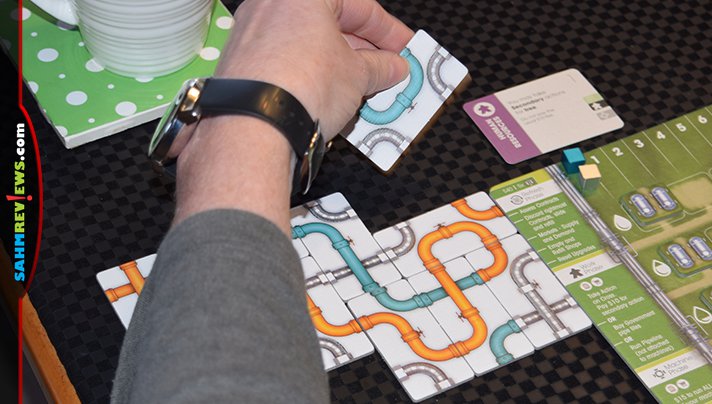 But let’s start with the namesake of the game. In order to sell oil or fulfill contracts, you will need to run the oils through your system of pipes: your pipeline. You have to spend money in order to purchase pipes then carefully arrange them in a grid next to your player board. Each of the different colors of pipe carry the corresponding type (color) of oil. One of the actions you can take during your turn is to place your worker in the pipeline field and run oil through the pipes you can reach from that space. To make things more complicated, the pipe needs to be a specified length in order to bump up your oil to the next level. The longer the pipe, the better the quality of oil that comes out on the other end. How much better is determined by a grid on the main board that explains the length needed to get to each level.

Oh, but wait! You need to have oil to run through the pipes to upgrade them. Know what it takes to get your hands on oil? Money. Hope you didn’t spend all your money to buy pipe! Even if you do have money, the price of the three different types of oil is variable based on whether anyone has already purchased some. It will restock to a certain level at the end of each year, but with only three years for the game, don’t sit around waiting for the refill in hopes of a cheaper price. Have a glut of money and ready to stock up on oil? I hope you have enough tanks available to hold it all. You can buy more tanks, but… more money needed! Thankfully, if you’re able to fulfill all or part of your contract or a complete order then you can acquire money during your turn. That’s a pretty big deal, if you managed to upgrade your oil in the first place to be able to do that. 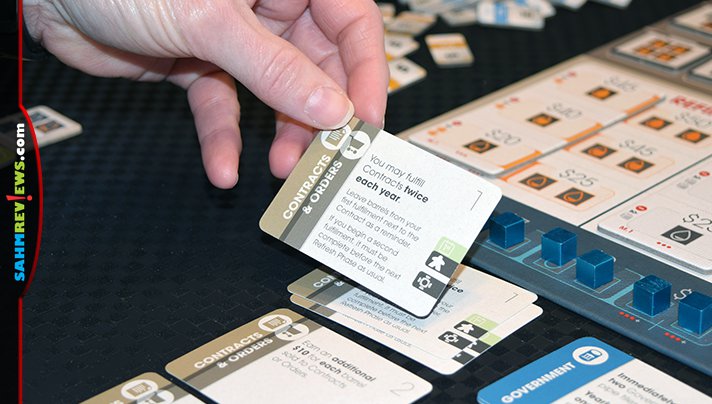 Another action you can take is to spend $20 to purchase a system upgrade. This may include acquiring free pipes each year, taking secondary actions for free, earning more for your contracts, paying less for a type of oil or a variety of other possibilities. 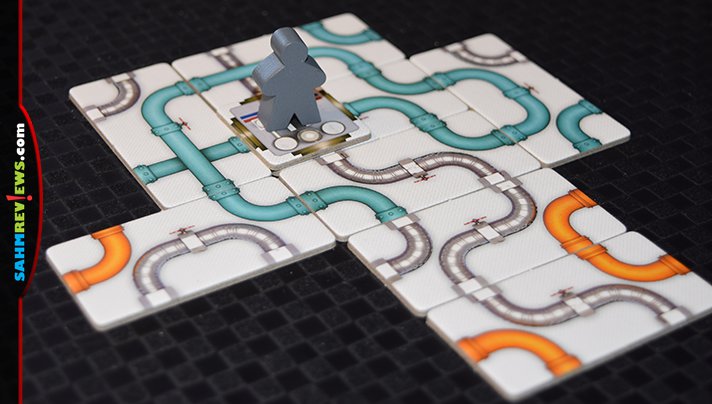 I’ve mentioned some of the different actions you can take. In a nutshell, everything you do requires you to use an action. However, if you purchase a machine and place it within your pipeline then you can pay to run it at the end of each turn instead of dedicating a turn specifically to processing oil. Since you’re able to place goods on your contract cards at any point, if you have a machine in place then it’s possible for you to keep a flow of money coming in. Since having the most money is what determines the winner, this is a good thing. 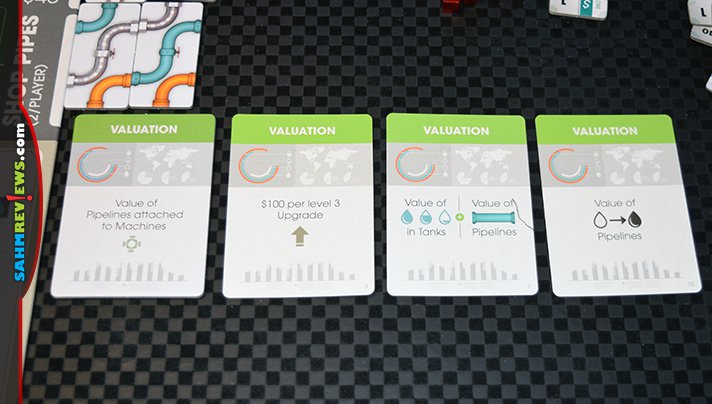 Finally, at the end of the game, you’ll earn money based on extra oil you have on your personal board, how long your pipelines are and some special valuations that vary from game to game. All these can make a difference in the same way that I explained has happened with other games. Did it happen with this one? No. Not even close. I ended with about half the score of my closest opponent and a quarter of what the winner accumulated. The biggest difference is that the winner had already played the game a few times and had preconceived ideas on what didn’t work and what did.

As promised, here’s an update on my stance about Pipeline. My early-round meltdown was because I absolutely locked up. It didn’t take a master chess player to know that I was several turns away from being able to accomplish anything which meant I simply had no idea what to do. I decided just to focus on grasping how the different aspects of it worked together. I was off to such a rough start, but I knew that I would fare better in future games. At the end of the game, I was asked if I would ever play it again and I said I would. That’s how you need to look at these types of games. Sometimes they can’t be mastered the first time you get it to the game table. Sometimes it takes multiple times to really grasp the mechanics or the theme or the nuances. This is the first game that I’ve struggled with on the first time through and I suspect it won’t be the last. There are only a handful of games that I’ve been completely soured on and those were completely the result of the actions of the people I played with and not of the game itself. This isn’t one of those. This is a reminder that board games are a form of social entertainment and enjoying the game isn’t contingent upon whether you win or not.

If you are looking for a game that you can learn to master over time, then Pipeline is one to add to your game shelf. You can purchase it direct from Capstone Games when they get it back in stock or toss Pipeline into your Amazon cart. Of course, we always want to encourage you to ask your local game stores about availability, too! Find out what else Capstone Games has in the pipeline by monitoring their updates on Facebook and Twitter.

What’s a game that you struggled with at first but loved once you understood it?

2 thoughts on “Pipeline Board Game Overview”