We’ve always felt that games designed for only two players are underrepresented in today’s marketplace. There are countless party games available at nearly every retailer across the country. Strategy games are also making headway since we’re seeing games like Dominion and Ticket to Ride alongside them. There’s a push to issue “Duel” versions of popular games to cater to the two-player audience. Some are both very good tributes to their original and great games on their own, while it’s obvious others are just cash-grabs.

We’re always on the lookout for solid two-player games since our daughters are nearing the end of their teenage years and have less and less time to sit down and play. Quick games that support a fewer number of players are at the top of our list right now. One example is a game that we first played at Geekway to the West 2018 – Pyramid Poker by R&R Games. 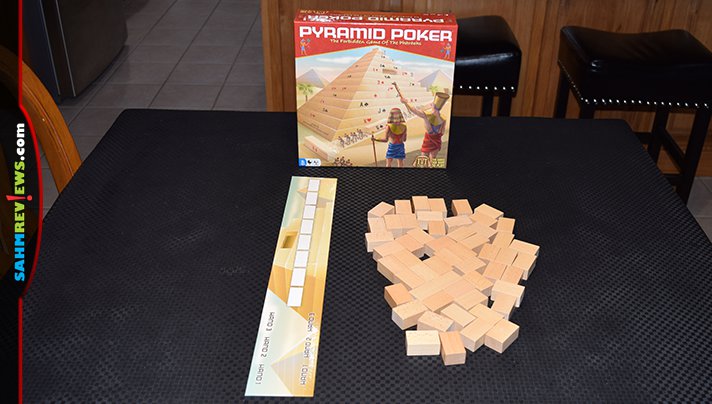 Now we’re no stranger to poker-themed games and pick up a lot at thrift stores since it is a theme that has been done to death for decades. However, in Pyramid Poker we saw something very unique and different. Not only doesn’t it use traditional playing cards, each game is different because the players are randomly choosing which “cards” will be used for the game! 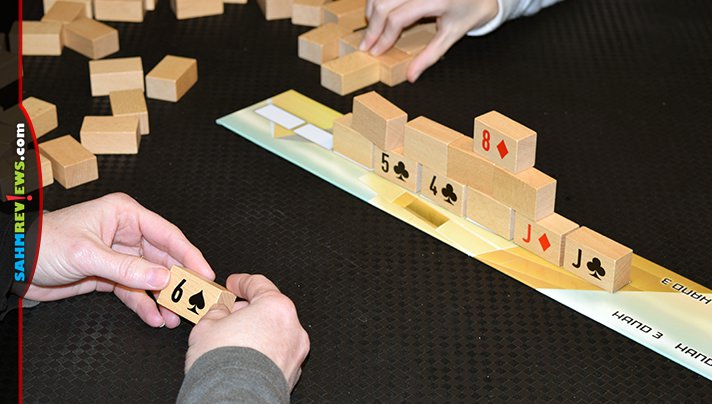 Inside a box of Pyramid Poker you will find a long board to set in the middle of the play area. There are also wooden blocks, one for each card represented in a typical deck, including jokers!  These are laid out, face-down, and mixed. Players will take turns choosing one of the blocks and adding it to the board. 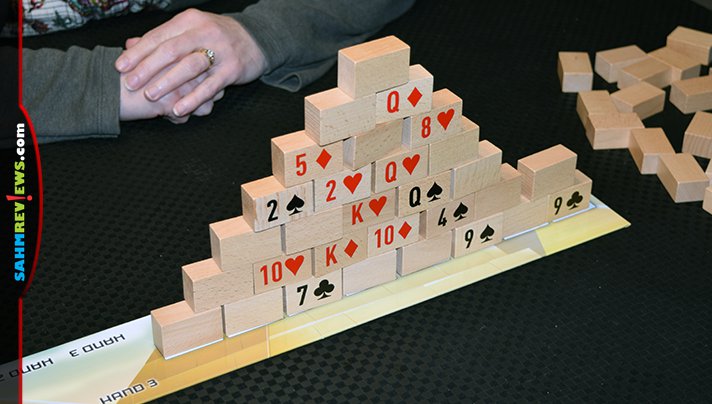 The board has a number of spaces marked for the placement of the blocks. This is the base of a growing pyramid! Each time a person lays a new block, the pyramid either grows wider or taller, until each person has laid fifteen blocks. When adding a block to the pyramid, the active player looks at the number and suit. Without showing it to the other player, they add it to the pile with the values facing them. The end result is a semi-pyramid consisting of thirty blocks, fifteen facing each player.

Playing the game is just as easy and quick. Each person takes turns selecting one block from the pyramid to add to their hand. You may take either a block facing you or one facing your opponent, as long as it is not covered from above by any other blocks. On the right side of the board are three spaces facing each player signifying the three standard poker hands they will build. The newly-chosen block is added to one of those hands immediately and may not be moved after placed. 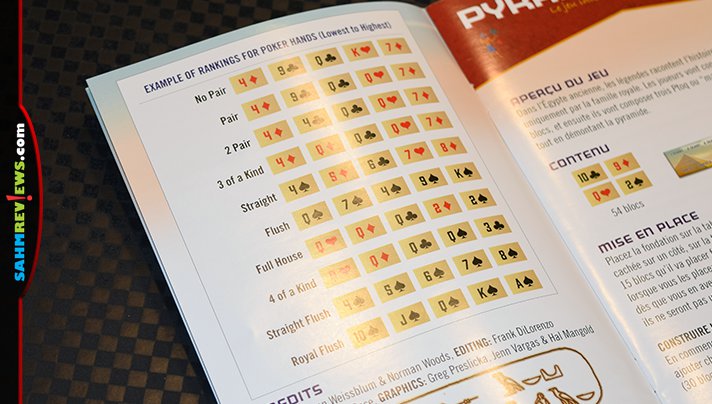 Even if you or your opponent doesn’t have much experience with poker, or just cannot remember what beats what, a handy key is included in the rules. Just as in the gambling game, you are trying to build the highest valued hand possible (straight, flush, full house, etc.) to beat your opponent’s hand directly across the board.

All chosen blocks are laid face-up, so it is possible to guess on what the other player is working on for any particular hand. Each person continues to draw blocks, adding them to one of the three hands, until each has drawn fifteen and the pyramid is empty. 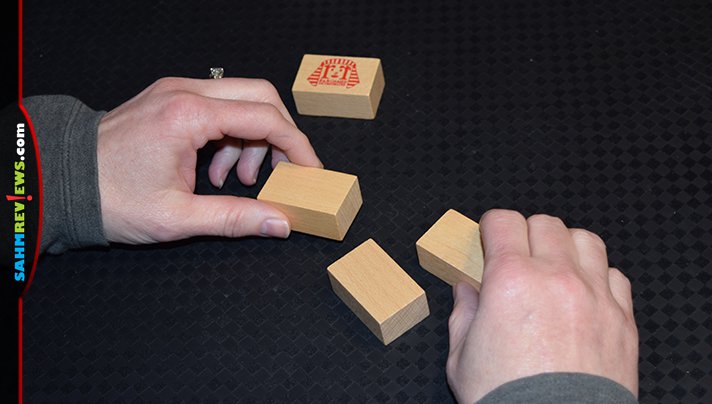 If you happen to draw a joker, it is treated differently than a normal wild card. Instead, a joker allows you to randomly draw three blocks from the leftovers that weren’t originally in the pyramid and choose one of them to add to your hand! 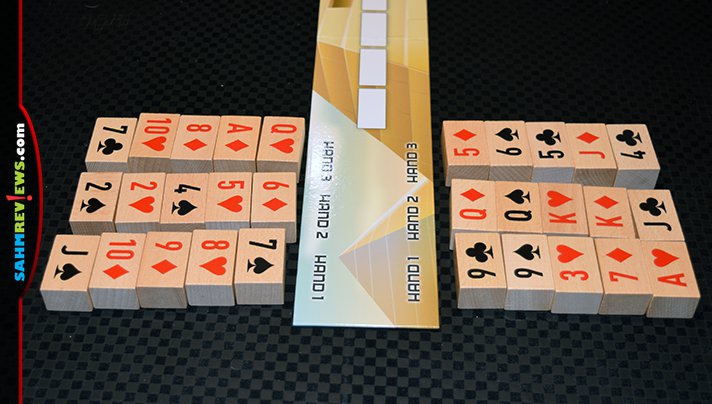 Once all blocks have been played, the three sets of hands are examined and whomever has won the majority wins Pyramid Poker! Alternate rules allow for points scoring equal to the value of your winning hand (one point for a straight or flush, two points for a full house and so on) with a bonus for winning two or all three hands. You’ll continue another game until one person meets or exceeds a predetermined number of points.

It takes only about 15 minutes to play a game of Pyramid Poker. This is perfect for our family on the run. Copies can be found on Amazon, at your favorite local game store or direct from R&R Games on their website! We regret waiting so long to tell you about Pyramid Poker since we’ve been playing it for almost two years now, so make sure you’re following them on Facebook or Twitter so you can find out about their next game before we get to it!

Have you ever played a non-card version of Poker?