I was fortunate to have lived in West Germany for the better part of my elementary and middle school years. We took the opportunity to visit a number of European countries while my father was stationed over there. Our family was able to visit the majority of Western Bloc, missing out on Portugal, Turkey, Iceland and Greece. Being exposed to different cultures at a young age has given me an appreciation for customs and lifestyles that I don’t believe most of my American friends have. But what I remember the most about our travels was the architecture.

Each country (and regions within a country) had unique construction styles and methods. From the arenas in Spain to the palace of the Queen of England, you could easily discern where you were by the designs of the local buildings. I’ll always remember the half-timber houses of West Germany, Holland and Belgium, the tiny row houses in Great Britain and the hanging houses in Spain! 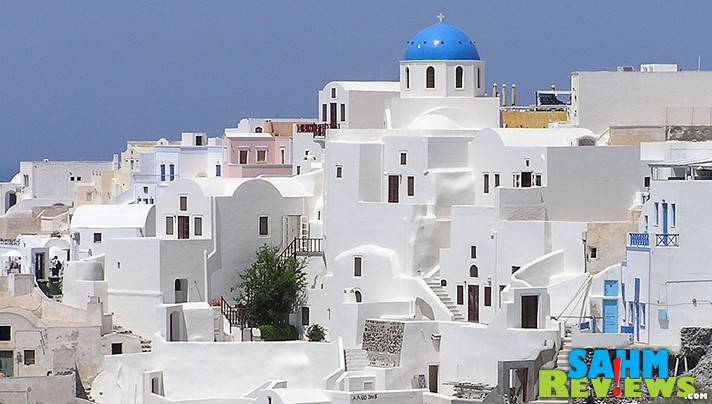 One place we never got to visit, but had seen amazing photos of, was Santorini, Greece. Santorini is an island in the southern Aegean Sea, about 120 miles southeast of Greece’s mainland. What makes this place such a tourist attraction is its own unique architecture. Most of the buildings and houses of Santorini and nearby islands are dug sideways or downwards into the surrounding pumice and then colored with a whitewash or limewash made from various volcanic ashes. This consistency turns what would normally be a drab structure into a small piece of a beautiful puzzle. 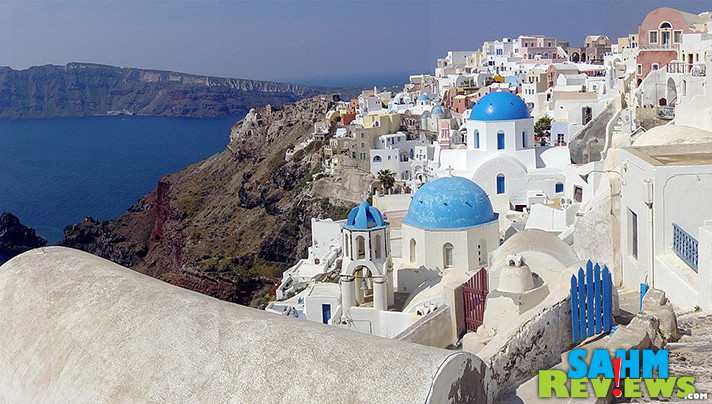 Back in 2004 there was a self-published game named after this beautiful location. It was from my favorite game genre, abstract games, and was made from whitewashed wood. Much like the various games I own by Gigamic (Pylos, Katamino, Quarto!, Quits), I was drawn to it because of the quality of its components. Sadly, I never found a copy to purchase. 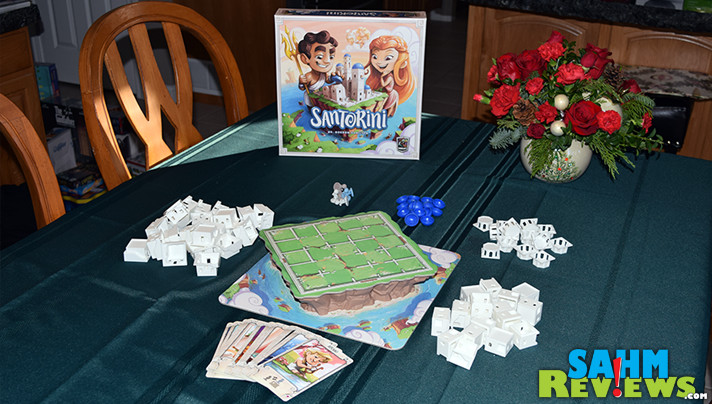 Then in 2016 something exciting happened. Roxley Games decided to run a Kickstarter campaign to try and bring Santorini to the masses. With a funding goal of only CA$ 85,000, they were completely overwhelmed by the immense popularity of the campaign and ended up raising over CA$ 700,000! Santorini would be available to anyone that wanted it! 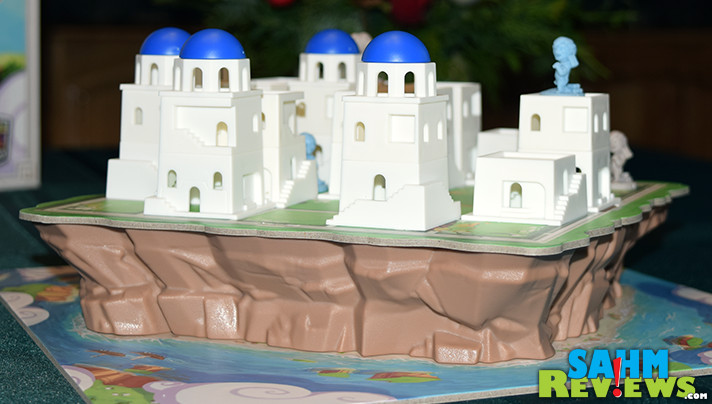 And why wouldn’t they. Not only were they reissuing a well-though-out abstract game, they accurately applied a Santorini theme to the game that makes it visually match the hot vacation spot. Gone were the geometric wooden pieces. Now the game included detailed plastic buildings and color-matched domes. New artwork for the God cards and a three-dimensional base gave every backer more than their money’s worth!

The game of Santorini is actually quite simple to learn. Like most abstract games, getting up and running is a quick affair, but you’ll spend a lot of time developing strategies and tactics for subsequent rounds. Each player receives a randomly-dealt God card which awards you with a special power to be used in that game only. Some might allow you to build twice (instead of once) per turn. Others prevent your opponent from moving up a level when you do or even give you additional ways to win the game that your opponents do not have! 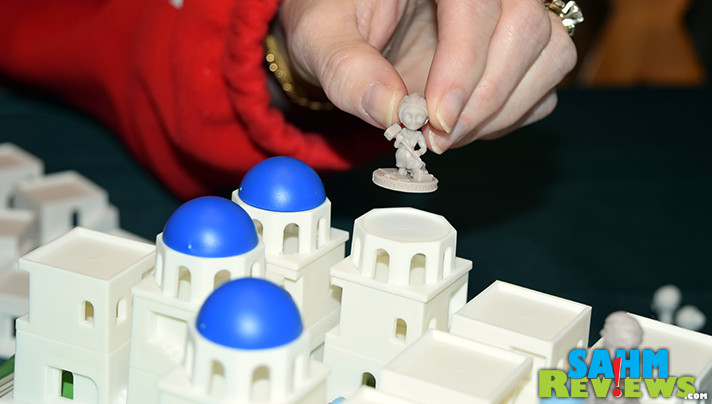 You control two builders. On your turn you will move one of them to an adjacent space and build one building block in one of the spaces surrounding your builder (as long as there is nothing there preventing it from being built upon – like another builder). When moving, you may move up one level or down as many levels as needed. That’s all there is to know to get playing!

Both Gods are trying to get one of their builders to the top level of a building (3rd floor) before their opponent does. Half of the time you will be building to improve your location, the other times you might be building to prevent your opponent from moving up. Remember, you can only move up one level at a time, so placing a second building level on the space next to your opponent should prevent them from moving up on the next turn. 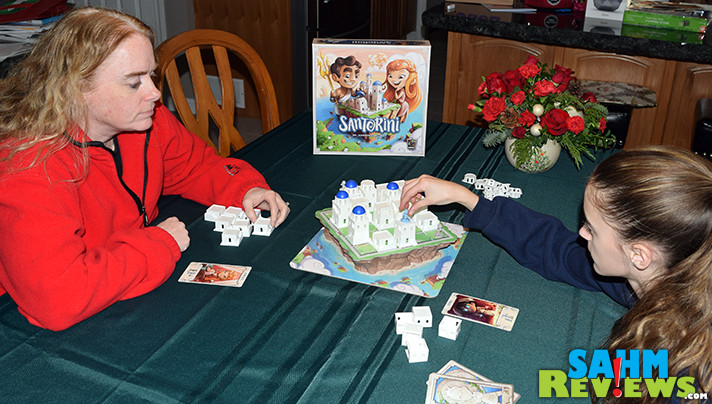 You can also finish off a building by placing a blue dome on top of a 3-story building. This prevents anyone from moving to the building to win the game. If the game lasts long enough (most rounds are well under 30 minutes), the first player to be unable to move either of their builders loses the game. 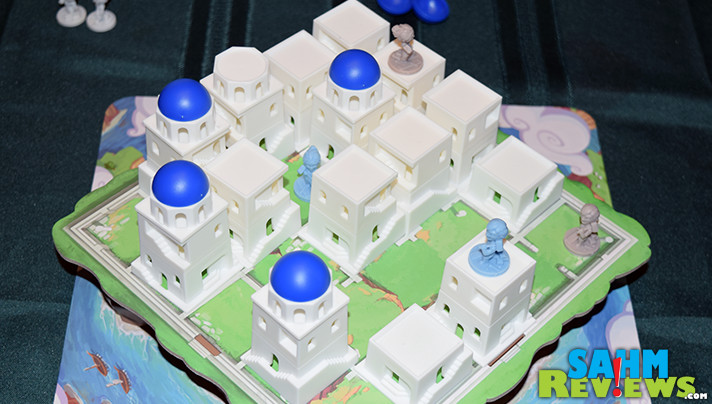 Quite honestly, Santorini is about as easy as Checkers to learn and play. But there is a whole lot more strategy involved, and I’ve never seen a Checkers set as beautiful as this game of Santorini. And with dozens of different Gods included in the base game, it will be some time before you play two identical rounds of Santorini.

So…you want to buy your copy but you missed out on the fundraising campaign. In much of the same way that Roxley Games brought Santorini to the hobby game world via Kickstarter, Spin Master has stepped in to also issue a version to the mass market!  Thanks to their manufacturing and distribution power, you can find this latest version at big box retailers (and of course, Amazon) for under $30!

While you wait for yours to be delivered, check out Roxley Games’ social media feeds to see what they’re working on next. We hear rumors of a new dice-based title (we LOVE dice!) coming out in January, so we’re eagerly stalking their Facebook and Twitter feeds to find out more!

Have you ever visited the island of Santorini? Wouldn’t you love to?

22 thoughts on “Santorini Board Game Overview”