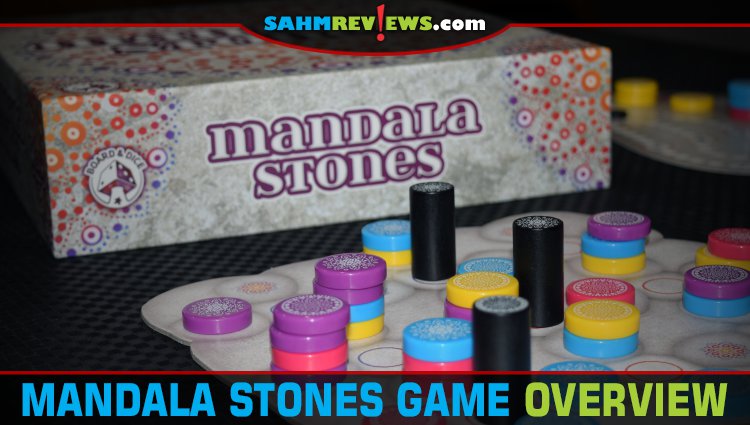 What makes for a good abstract game? I consider myself somewhat of an expert on the subject since I have been playing abstract games since I was incredibly young. And I’m not talking about just chess and checkers. If it’s been published nationally, I have tried it at least once.

Theme doesn’t impress me much when looking at abstracts, but they can be a nice touch when done correctly. Take Santorini for example. Originally a wooden game composed of blocks and half-spheres, it wasn’t until it was given a makeover that it really made a splash in the market. It’s a fitting example of the type of abstract games I prefer. Ones with simple rules and a lot of strategy. Much like my own game creation, Gekitai!

But that’s not what this is about. It’s about another game we discovered recently, Mandala Stones by Board & Dice, which takes a simple concept and turns it into a very strategic endeavor. This game just hit the market in the past few months and has already garnered a lot of buzz for its quality and simplicity. We took our copy to an annual game gathering of around 30 people and it hit the table nearly every day. 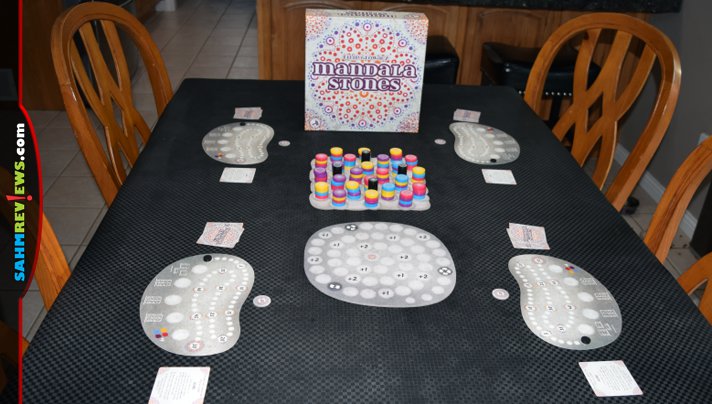 Mandala Stones is a game about creating works of art using colorful stones. Set up for a match by mixing all of the stones (discs) into the supplied cotton bag and drawing out four at a time. Stack them and fill the marked spaces on the main board, which is set in the center of the play area. Black cylinders, representing artists, are also randomly put on their starting spaces between the stacks of stones. Both the stones and artists have a mandala design on them (one of two different). This is the only complaint we had about the game. In low light these white designs can be difficult to distinguish from each other. 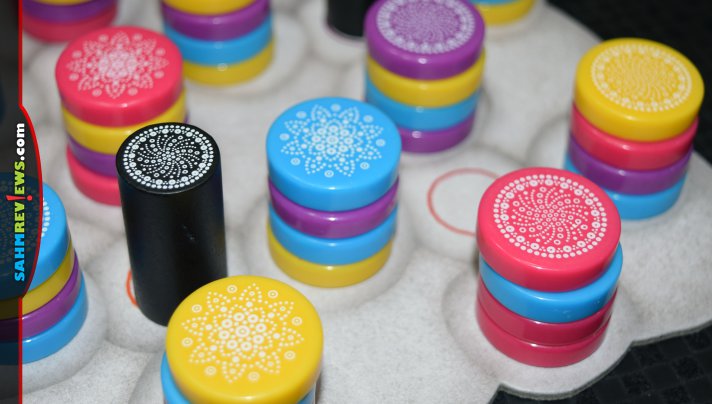 A custom timer board is also laid in the play area and each person (Mandala Stones supports up to four players) receives a player board, which also tracks your score. There is also a small deck of objective cards, of which two are dealt to each person. These may be looked at but should be kept secret from other participants. 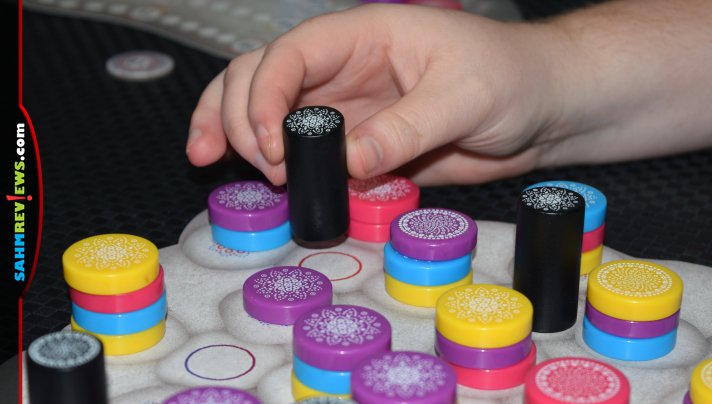 On a turn a player has the choice of two simple options – pick or score. Most of the time you will pick. To do this, move any artist to any empty circle space on the board then take the stone from the tops of the four adjacent stacks. That is, unless that stack is adjacent to any other artist or doesn’t match the mandala pattern of the artist you selected. 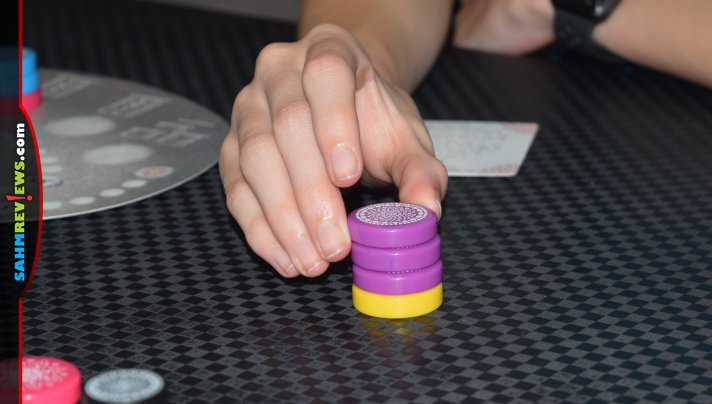 Pay special attention to the order in which you pick up the stones. Decide which one you want first and then collect all other valid stones in clockwise order, placing each one on top of the previous one to create a new stack. After making this tower, place it on any empty space on your personal board. You have five spaces to choose from and your decision will depend on how many stones you collected, their color and their order. 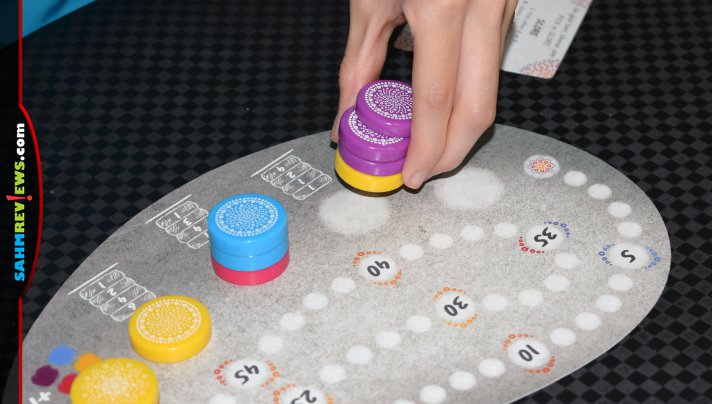 Your other option on your turn is to score instead of collecting new stones. You must have at least two, and up to five, matching-colored stones on the tops of your stacks to score a specific color. Each space on your board in which you have a matching color will score its custom points based upon what is in your stacks. For instance, the first slot awards you one point each for how many stacks you have on your board of different heights (zero also counts). The second through fourth spaces give varying points depending upon how high that particular stack is. The final area awards one point plus one for distinct colors in that stack only. You will score all stacks in which you removed matching stones. 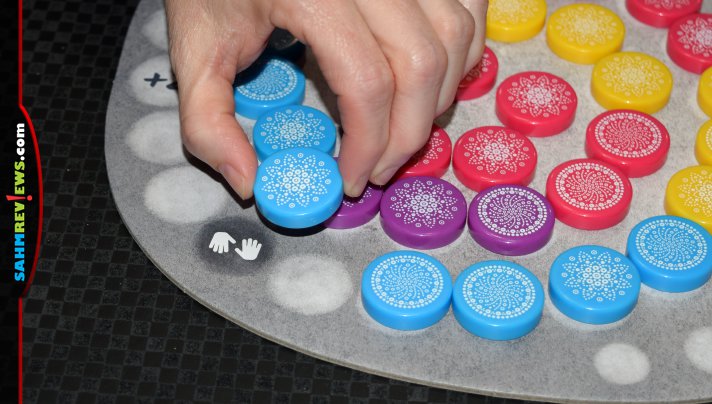 Alternatively, you can also score any top stones by taking one point each and removing them, no matter the color or pattern. The removed stones, regardless of scoring method, are then placed on the timer board in order along the printed pathway. Cover one of the +1 or +2 spaces and earn that many points. Special spaces on the board for different numbers of players will signal the end of the game once covered. When someone covers the applicable one, or passes it, finish the current round of Mandala Stones so everyone has had the same number of turns. 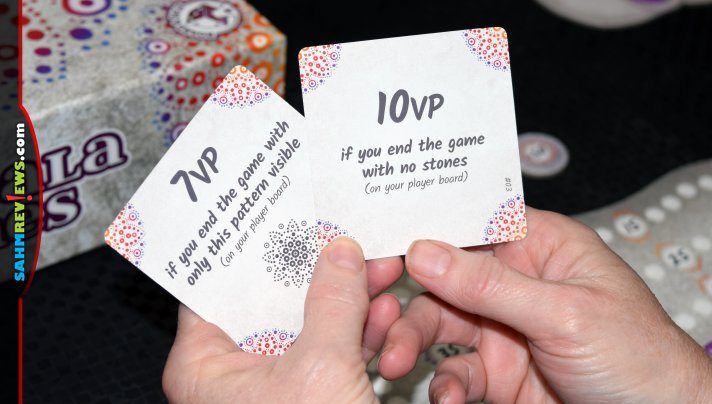 Final scores are tallied by taking the number of points collected during the game (from the player boards) and adding any successfully completed objective cards. The player with the highest overall total wins Mandala Stones! In the case of a tie, the player who was earlier in turn order is declared the overall winner. 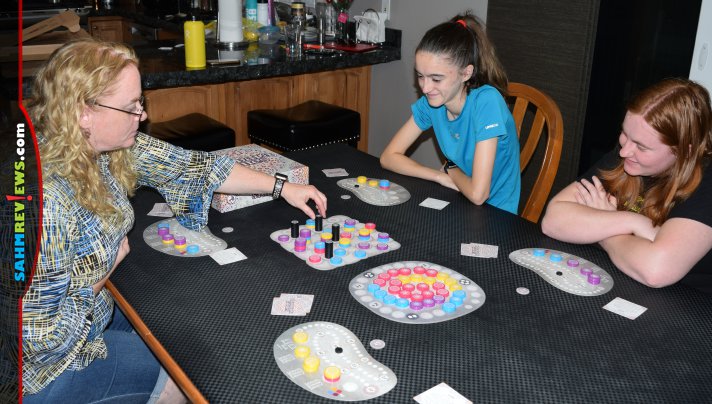 Mandala Stones is the first abstract-type game published by Board & Dice and we’re hoping to see more if they are as easy to learn and strategic to play as this one. Stock on Amazon is limited at the time of this writing, so get your copy today!  Also ask for it at your favorite local game store or grab it direct from the publisher in their web store. Board & Dice is also known for their euro-style strategy games. If you’re a fan of the heavier titles, be sure to follow them on Facebook and Twitter as they have some remarkably interesting things coming out this year!

What is your favorite abstract game with a theme?