To say that 2021 started out a little rough would be a huge understatement. Having a family member at the hospital fighting for his life is not exactly how we planned to ring in the new year. Friends, family and colleagues rallied to our side sending gift cards, delivering food and being a shoulder when we needed it. Our friends at Cephalofair Games (the creators of Gloomhaven) had DoorDash ready for us upon the asking. Thanks to a lot of local support dropping off enough food to feed an army, we didn’t need to take them up on that generous offer. Instead, once Scott had returned home, they shipped us a few things including their 1000pc Gloomhaven jigsaw puzzle to help ease him back into gaming life. 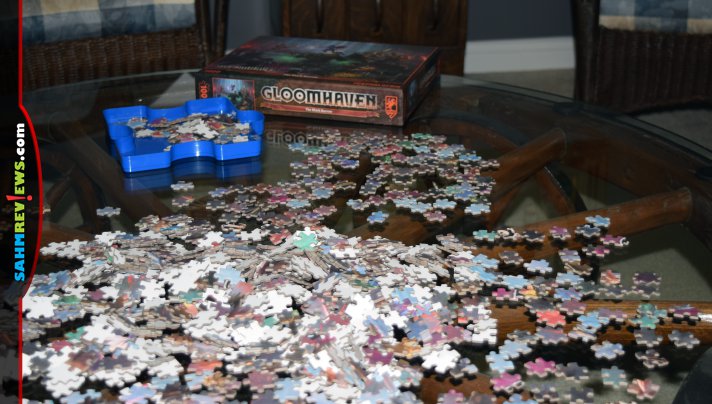 We have continued to pick up puzzles from the thrift store so we have no shortage of them to work on. But the Gloomhaven jigsaw puzzle drew us in because we’re huge fans of the game. We get together weekly with another couple to play Gloomhaven with several hours of scenarios still available to us.

There are six starting characters in Gloomhaven and they’re all featured in this puzzle. Brute, Cragheart, Mindthief, Scoundrel, Spellweaver and Tinkerer. The first time we played, I was a Tinkerer. He’s the small steampunk looking character just below the archer. Unfortunately, there were constant scheduling conflicts and we weren’t able to play for a while. When we started back up, we opted to begin the whole thing from scratch and that’s when I became a Spellweaver. She’s the winged character in the upper center of the puzzle and was a rockstar. I was kind of sad when she retired. 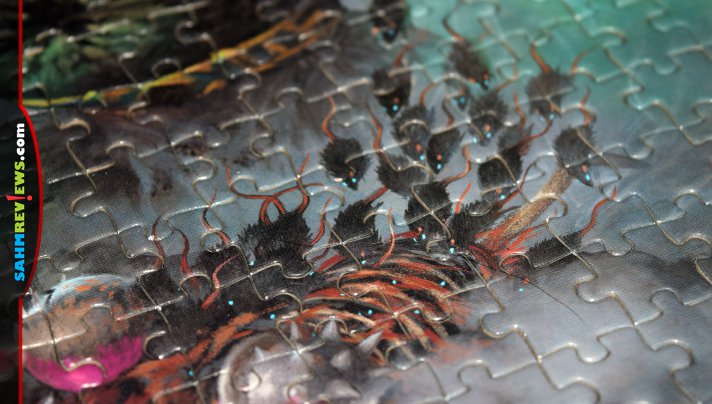 Normally when assembling something like the Disney Villainous puzzle or a colorful MasterPieces puzzle, I’m excited to get it together for the accomplishment. The Gloomhaven jigsaw puzzle offered a different experience along the way. I was constantly entranced by the details that you become familiar with as you bring those characters to life in scenario after scenario. 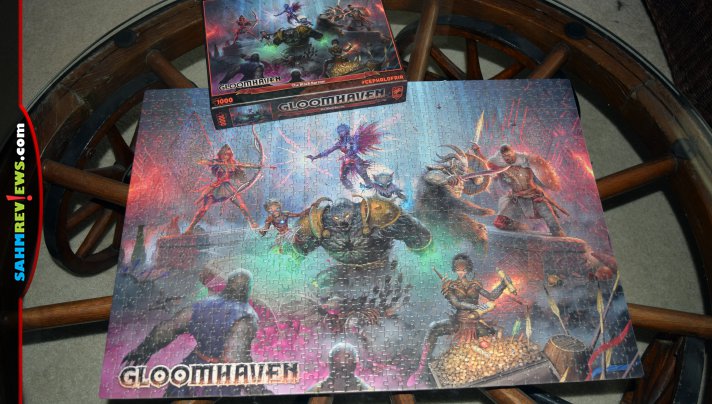 When the puzzle was completed, I realized that I need to seek out the other board game puzzles to add to my collection because it’s a lot of fun to merge these two passions. With respect to the Gloomhaven jigsaw puzzle, this is the only one they offer. Grab a copy direct from the Cephalofair’s website or add one to your Amazon cart the next time you’re placing an order. You can also check with your local game store to see if it’s something they have in stock. Follow Cepahlofair Games on Facebook to piece together the details of upcoming projects. Now please excuse me while I head off to see if we can get another Gloomhaven session scheduled.

Which Gloomhaven character is your favorite?