It’s been a little over three years since we presented one of our favorite abstract-game-turned-hobby-game, Santorini. To refresh your memory, the original game of Santorini was self-published in the early 2000’s by the creator. In 2016, Roxley Games ran an overwhelmingly successful crowdfunding campaign to bring an accurately themed version to market. Utilizing the original ruleset, the developers at Roxley added the feature where each player plays the game as a different god with unique powers. That’s when Spin Master stepped in to bring a retail version to a much larger market through big-box and online retailers.

When we first heard of Santorini: New York, our first thought was, “that’s a fantastic idea for a theme”. One of the most famous photos of Manhattan is of a line of construction workers taking a lunch break high atop a building. You could not recreate this non-OSHA approved scene today, but the image is ingrained in most people when thinking of New York. Re-theming Santorini, which is effectively a city-building game, to embrace the largest American city is a stroke of genius. 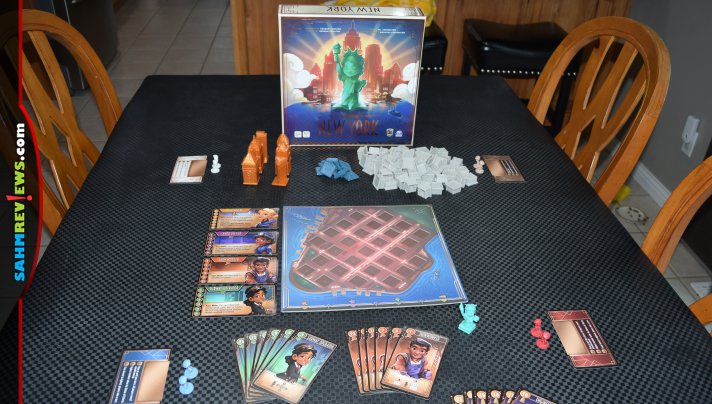 If you already own Santorini, why should you spring for Santorini: New York? The underlying mechanics of the game are the same – on your turn you will move one of your two workers and build a building in an adjacent area. As mentioned earlier, the previous version utilized God cards which gave that player a special rule-breaking ability for the entire game. This lovely feature is also one of the most criticized features of the game. Players felt that a bad draw at the beginning of the game might handicap them. We didn’t find this to be the case and is just a perceived disadvantage, especially against other specific gods. 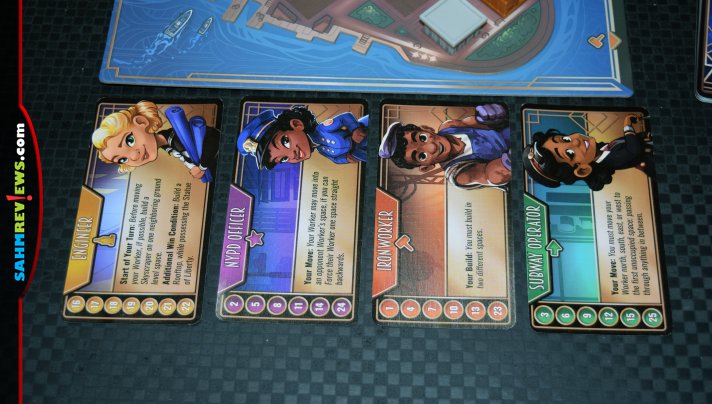 In Santorini: New York, your abilities will change with every turn! At the beginning of the game, sets of tarot-sized cards are selected to use, with a recommendation for the first game. These Role Cards still have individual abilities, but the deck will be shuffled and dealt out in hands of five to all players.

This version is played in rounds with each person selecting one of their cards from their hand and revealing it simultaneously with everyone else. Cards are numbered and will determine play order. Whomever played the highest-numbered card will go last but will also receive the Statue of Liberty figure. This special miniature is needed to win the game.

Then, in order from lowest to highest, players take turns moving and building (as in the original), taking note of the specific requirements on the card they played. Some allow you to build twice, others allow for special movement and a couple even give you the ability to alter the position of the other players! Unless the ability says, “If Possible”, if you cannot complete the special ability with your workers, one of them is removed from the game. Lose both workers and you are eliminated! You’ll also lose a worker if you cannot move and build! 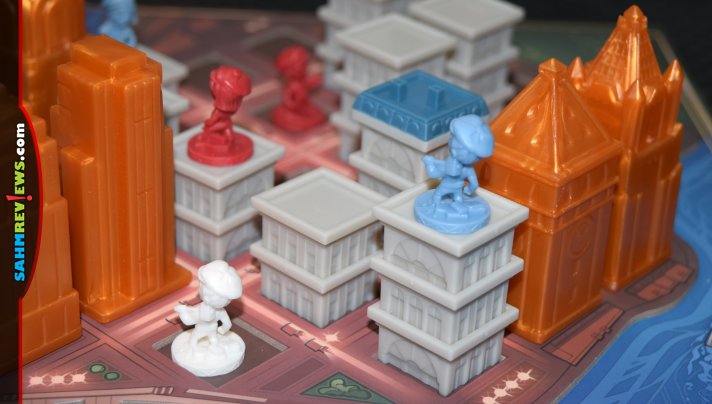 After four complete turns, you will have one card left in your hand. The discard pile is shuffled, and all players are dealt four more cards to bring their hand count back up to five. Turns continue until someone can complete one of the three ways to win a game of Santorini: New York. If you are the only player with workers left on the board, you win by default. If playing with the Engineer Role Card, playing that card and meeting its special win condition will earn you victory early. And of course, there is the original way of winning – move one of your workers to the third level of a roofless building and be in possession of the Statue of Liberty mini (meaning you went last that turn)! 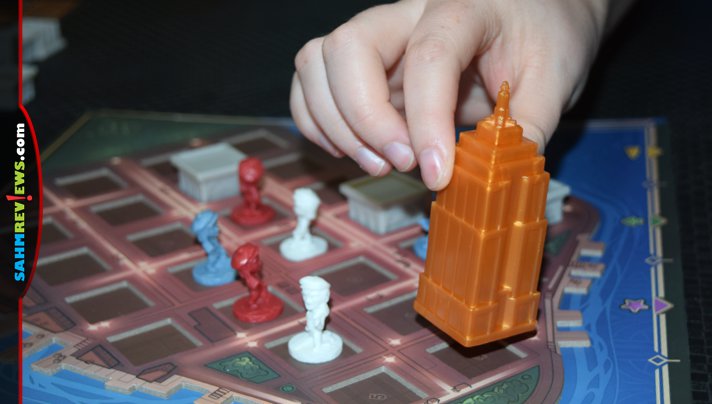 This latest version is as well-made as the original with plastic buildings, tarot-sized cards (you’ll want to sleeve these) and a multi-layered board to help keep the buildings from sliding around. Santorini: New York is the best of two games and is priced at the same level as its predecessor. Ask for a copy at your favorite local game store or grab it online from Amazon. We wonder if Spin Master will continue with other location themes for Santorini. We’re closely watching their website along with their Facebook and Twitter feeds to find out more!

What city would you love to see represented in this line of games?