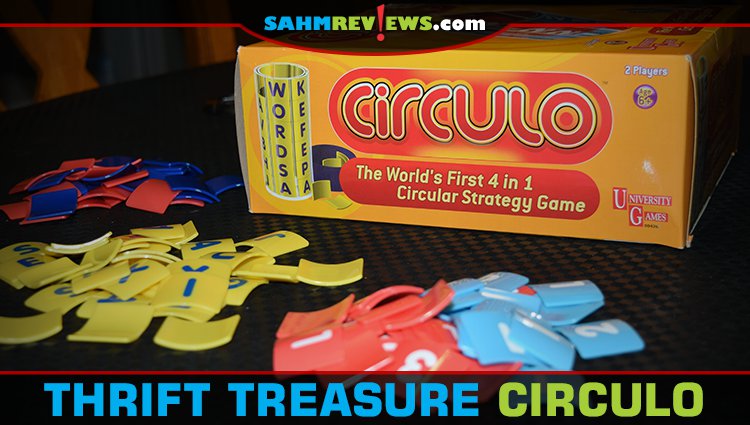 A new school year means the girls will be trying to make All-State for the various instruments they play. Leading up to the weekend of auditions are a number of camps and workshops held across the state. These are established to give kids the tips and lessons they’ll need to be successful during their final audition. Think about it as a prep class for college SAT’s or ACT’s.

This means a lot of travelling on the weekends to shuttle them to these various events. And then waiting. Lots of waiting. Parents aren’t allowed and it doesn’t make sense to drive hours back home only to turn around and drive back to pick them up. So we usually spend the day at a local mall or thrift store! A couple weekends ago we managed to find a couple new games we hadn’t heard about at a Cedar Rapids Goodwill Store! 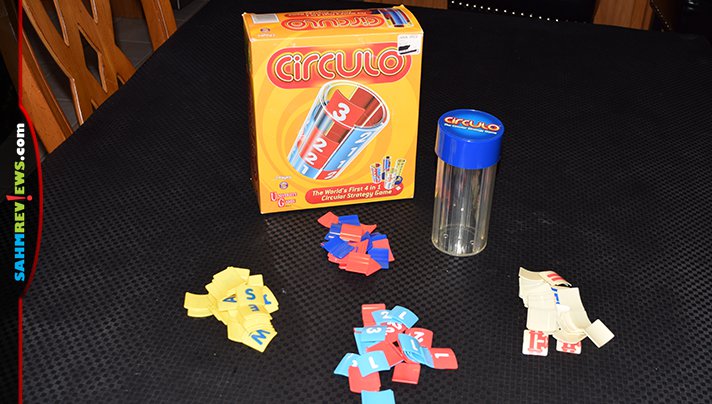 Circulo by University Games stood out on the shelf because of its unique board design. Rather than a flat cardboard piece, this game utilized a plastic cylinder that holds tiles. Inside the box are different tile sets for four different games!

Sum of the Squares 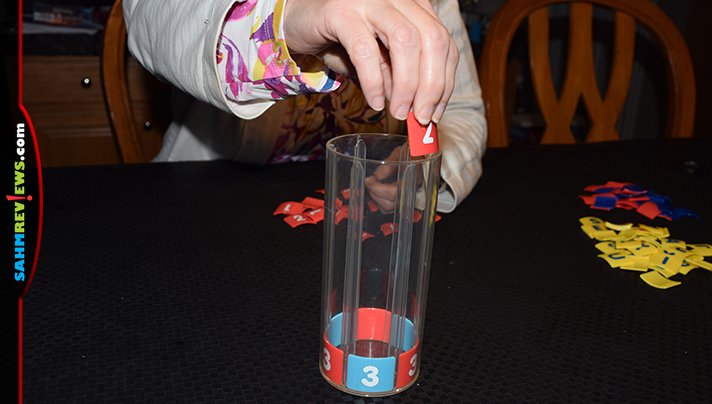 Using blue and red numbered tiles, each player takes one color and takes turns placing one tile into the tube. The first player to make a line of numbers of their color that adds up to exactly seven in any direction (including diagonally) wins! If all tiles are used without a clear winner, the game ends in a tie. 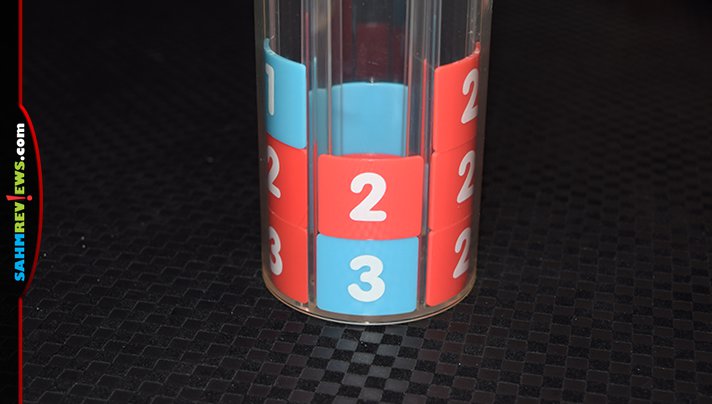 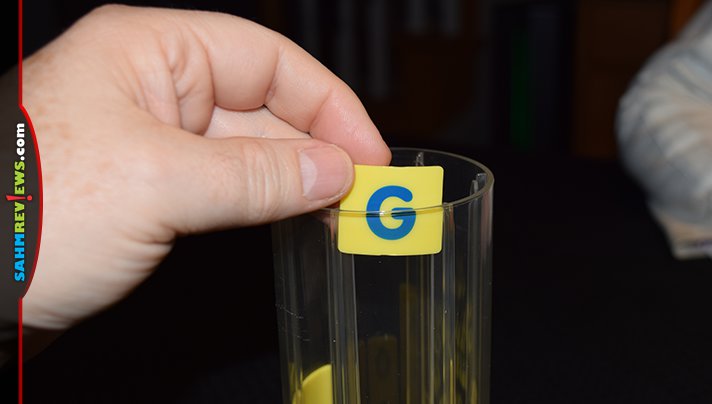 All letter tiles are like-colored and put into a pool. Each person takes a turn to place one of the tiles of their choice into the tube. The first player to make a word of at least four letters in any directions (including diagonally and backwards!) is the winner! Again, if no words are discovered after all tiles are used, it is a draw. 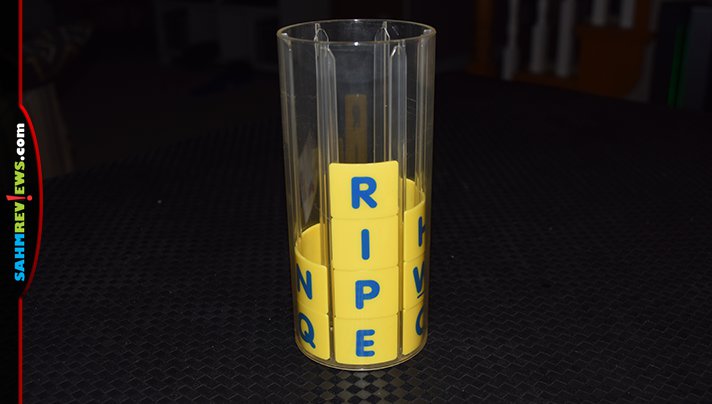 These tiles feature either blue or red pipes and the goal is to block your opponent so they cannot add to their pipe. Players take turns dropping tiles into the tube slots. If a column is empty, any tile may be placed there. If there is already a tile in that column, subsequent tiles must connect to a pipe of the same color either below it or to its left or right. 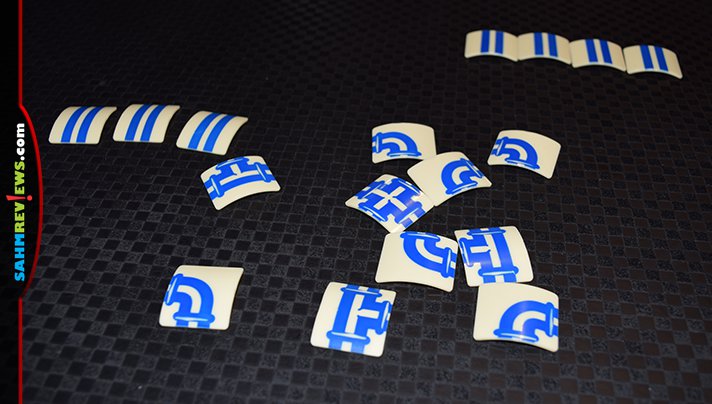 If a player cannot legally place a tile, the other player continues to place tiles until the first player can move again. If both players cannot place tiles, the game ends immediately and the person with the fewest leftover tiles wins! 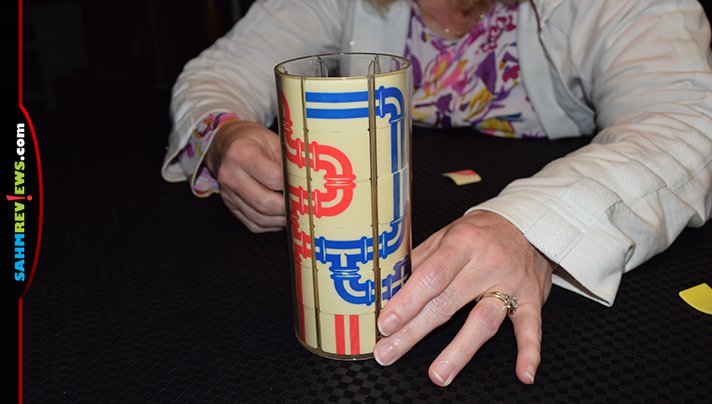 This is the simplest of all the games and is a standard challenge of lining up four in a row. Each person takes all the tiles of one color and tries to be the first to line up four of them in a row (including diagonally). Again, if no one is able to by the time you run out of tiles, it is considered a tie. 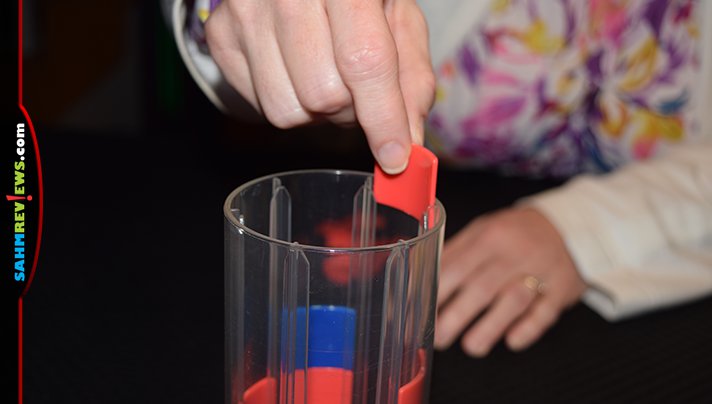 All four games in Circulo are very quick to learn and just as easy to play. The word version is probably the most difficult since a broad vocabulary will give a player an advantage. The pipe version is definitely the most strategic and probably our favorite! 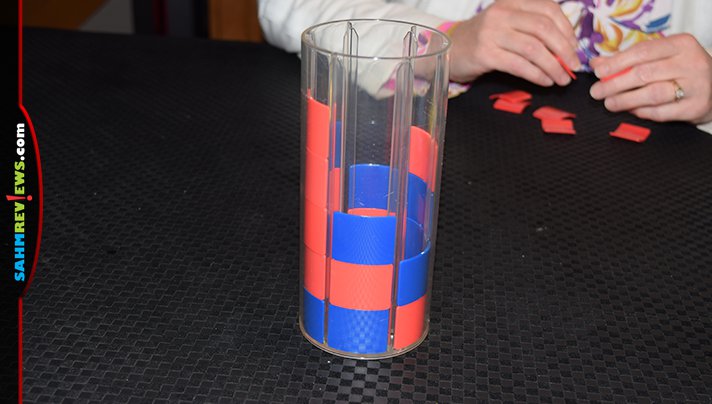 You can still find copies of Circulo on Amazon from third party sellers for around $14 even though it is no longer in print. If you happen across one at thrift, it is worth a couple bucks just to play around with the unique board!

What odd-shaped board games have you found?