A few years ago when we first started playing more serious hobby games instead of Monopoly and Sorry, we decided to attend a local game group’s game night we discovered on Meetup.com. At the time about 20 people gathered each Friday at a local college (now it’s usually 50-60 every week) to play any and all types of offline games. I still remember some of the first games we played that night: Qwirkle, One Night Ultimate Werewolf and an old 3M bookshelf game called Facts in Five.

Each one could be classified as a different type of game. Qwirkle is an abstract, ONUW a hidden-role and Facts in Five was definitely trivia-based. But there was one game type I played that night which I still remember vividly. They’re typically referred to as ‘cooperative’ games, meaning everyone wins or everyone loses. You must work together towards a common goal, and only with planning and cooperation will you and the rest of your team be successful. The game we played that night was Castle Panic by Fireside Games, and shortly thereafter became one of our first Amazon board game purchases. 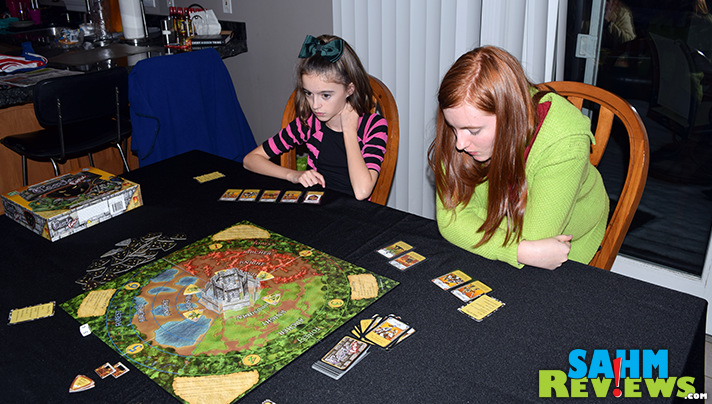 It didn’t hurt that we were both fans of tower defense apps on our iPhones. If you’re not familiar, these are games where you’re protecting your tower(s) from multiple waves of monsters by building more and more advanced weapons and deploying them in strategic locations. Castle Panic takes one aspect of this type of game and puts it into board game form, all while adding mechanics that don’t necessarily work well in a digital environment. 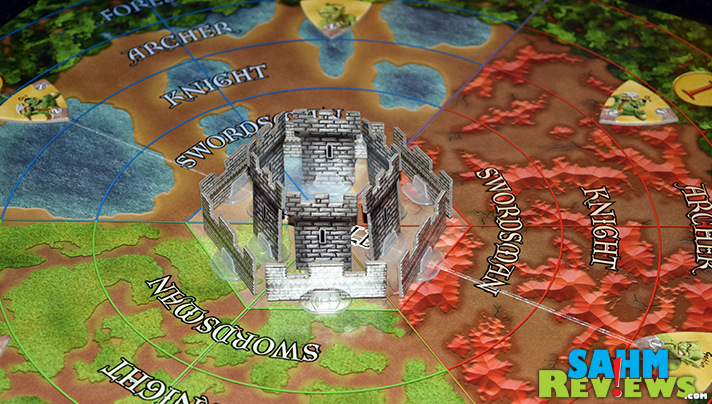 At the center of the game board lies your castle, protected by six cardboard standee towers and six walls. Surrounding the castle are three distinct regions (rocky, wooded and wetlands), each divided into two sections. These six segmented area are where the monsters will appear and make their way towards you, trying to break through your defenses and overtaking the castle. 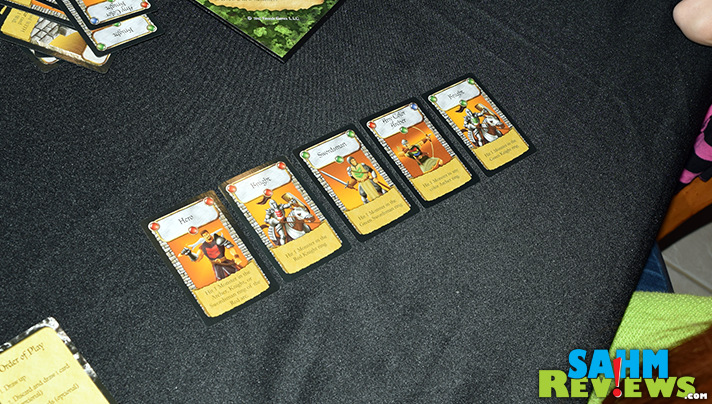 Supporting up to six players, on each turn a person has a number of actions they take. First you draw up to your hand limit (determined by the number of players) and then may discard one and replace it. You also have the option to trade a card (or cards if six players) with any other player as long as they have cards in their hand to swap. 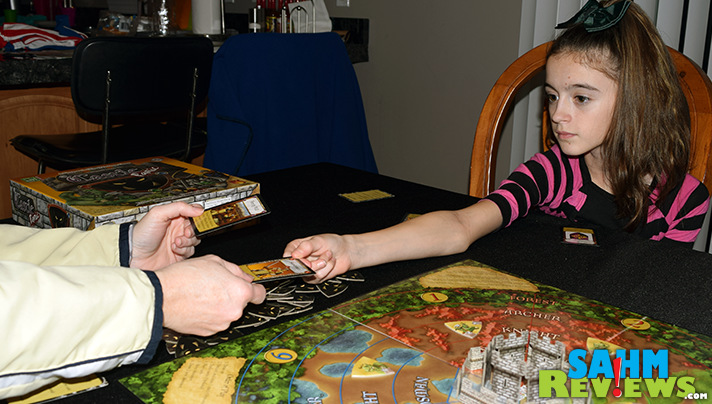 Next comes your opportunity to play as many cards from your hand that you wish, resolving them in order. These can be used to attack or slay monsters, slow them down, rebuild destroyed walls or even draw additional cards! In order to attack a monster, you must be able to hit it. To do so you must play a card that matches BOTH the color of the region the monster appears in as well as the ring location (distance from the castle). Each attack yields one point of damage and fortunately all monsters have only 1, 2 or 3 total health points. If you slay a monster, you gain their token as a trophy. 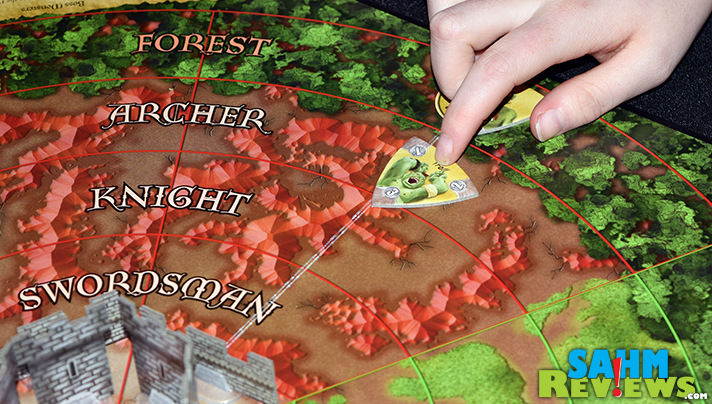 Once you have played all the cards you wish to this turn, it is time to allow the monsters to move. Each one moves forward one space closer to the castle until they reach your walls. If a monster is moved into a wall, the wall is destroyed, the monster receives one point of damage and remains in the outer ring. If he were to move into a tower (because the wall has already been destroyed), the tower now falls and again, the monster receives a point of damage but now also moves into the castle area. 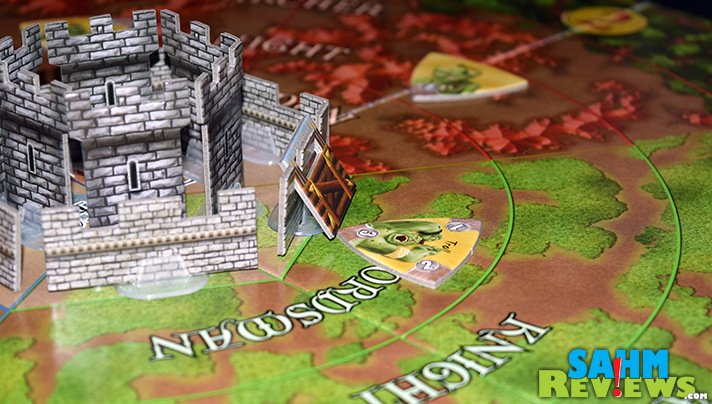 Once inside the castle, the monster moves counter-clockwise on their turn, slowly destroying the towers around your city. You MUST defend these towers, because once the last one falls, the game is over and everyone loses (well, except the monsters)!

The last part of your turn is to draw two new monsters and roll the die to determine which section they will appear in. Most tokens are regular monsters of varying strength, but some might be Boss Monsters which bring special effects while others are simply Monster Effects which affect the players immediately. 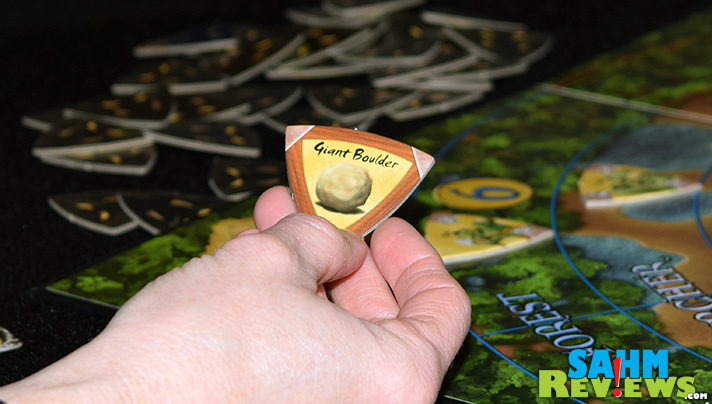 Castle Panic ends in victory when all 49 Monster tokens in the game are played and all of the monsters are slain. Each player adds up the number of victory points from their trophy tokens and the person with the most points is declared the Master Slayer! (So not only does everyone win the game, one person wins ‘more’!)

Nominated for a number of industry awards, Castle Panic has been a best seller for Fireside Games ever since its introduction in 2009. We were very fortunate for it to have been one of the first games (and our first cooperative game) we experienced in the hobby game world and cannot recommend it enough to families with kids as young as six, even though the box says “10+”. You can find copies on Amazon or direct from Fireside for around $35! 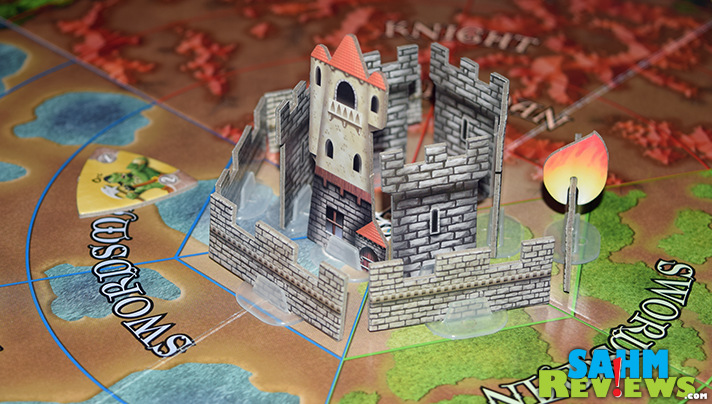 Thanks to the amazing success of Castle Panic, a couple expansions have been issued in the past few years to supplement the game play. First there was The Wizard’s Tower in 2011 which sees the arrival of a friendly wizard, Thalgar, who brings with him magical powers to help you fight off the now-stronger, faster and smarter monsters. Unfortunately, the monsters have also brought magic with them as well as Mega Boss Monsters including a dragon!

By quickly switching out a few of the cards and tokens, you’ll immediately upgrade your base Castle Panic game into something much more complex (and more difficult to win). A great solution for fans of the game who want to make it more and more challenging without buying a completely different game. You can find this expansion on Amazon for only $17!

Then in 2015, Fireside Games issued “The Dark Titan“. I guess this is more of a mini-expansion when compared to the previously-mentioned “The Wizard’s Tower”, but is certainly the most difficult of all the variations to date. Agranok, the Dark Titan, has recently appeared from his 100-year banishment to the void and is ready to reclaim his land, which coincidentally you have built your castle on. 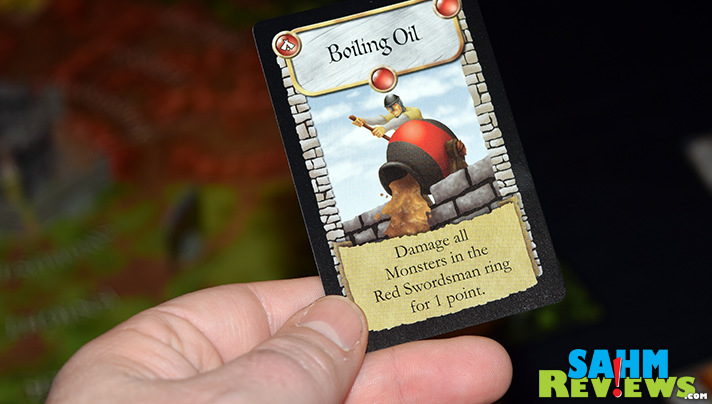 He brings with him a number of new monsters, including a Dark Sorceress and Boom Troll. You have new weapons at hand (boiling oil is my favorite) as well as a Cavalier that fights along side of you. Cards can also be “Banished”, which removes them completely from the game instead of to the discard pile. Obviously this could hurt your team’s strategy if the wrong card suddenly leaves the game!

The Dark Titan is only $13 and once again cranks up the difficulty of Castle Panic. And there’s rumors of yet another expansion due out any day now. Hopefully we’ll be able to feature it for you in the very near future! Watch their Facebook and Twitter timelines to find out more about it!

What is your favorite cooperative game?