At this point in time, there are few games out there that are too intimidating to consider trying. Yes, I get more anxious when I play games with people I don’t know but that’s because I tend to over analyze the various options in heavy games. This causes games to slow down and some people don’t have the patience needed to tolerate when I get bits of what’s known in the game industry as AP (Analysis Paralysis). With the right mix of opponents (or team members if it’s a cooperative game), I’m up to try almost anything. I think I can safely speak for the girls and say they are as well. That wasn’t always the case. When we first started attending the local game meetup, we encountered so many games – and types of games – we had never seen before. It was overwhelming at times.

In addition to getting our feet wet with Castle Panic, we played a lot of Fluxx from Looney Labs. As newcomers to the game scene, the fluid rules of Fluxx made it easy to learn. When we first sat down to play, we asked the people who brought the game, “What are the rules?” Their reply was the only rule is that the rules change and encouraged us to read the cards as we go. We played it almost every time we attended until those individuals stopped attending. There are a multitude of thematic Fluxx titles – from Chemistry Fluxx to licensed versions – all that follow the same basic rule of meeting the goal before anyone else does.

Last year we learned that Looney Labs had taken the familiar card game and turned it into a board game which they appropriately named Fluxx: The Board Game. I was skeptical as to whether they could convert it while maintaining the same play mechanism and random quirkiness. I’ll explain the game in more detail, but let me start by saying they managed to do it – fluid rules and all. To start the game, each player selects a color and takes the related card. The “Start” tile is placed in the middle of the table with all player tokens on it. The remaining tiles randomly placed surrounding it to form a 3×3 grid. The pegs are placed in the leftmost positions on the pegboard and the starting game length is determined by placing a peg in a low goal target for a short game or a high goal target for a longer game. Go through the shuffled card stack and remove the first five goal cards. Place those goal cards where it says “Place Goals Here” then shuffle the remaining to form a draw pile. Each player beings with 3 cards from the draw pile. It may seem all nice and pretty right now but it’s Fluxx so you can be assured this is as orderly as the game will ever be. 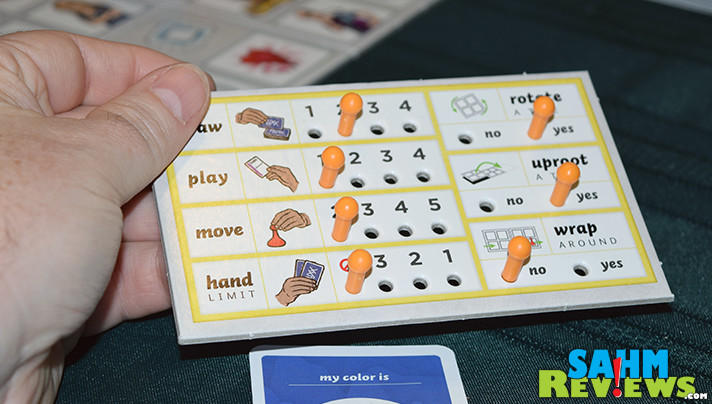 In turn order, players must make one change to the pegboard, adjusting anything you like as long as you do not reverse what someone else has modified. You may have thought you were going to start with no hand limit, 2 moves per turn and a 3-goal objective but thanks to this mandatory rule change, everything is different before your first turn! But wait, there’s more chaos in store! This one is free but you can make additional changes on your turn by playing a “New Rule” card. 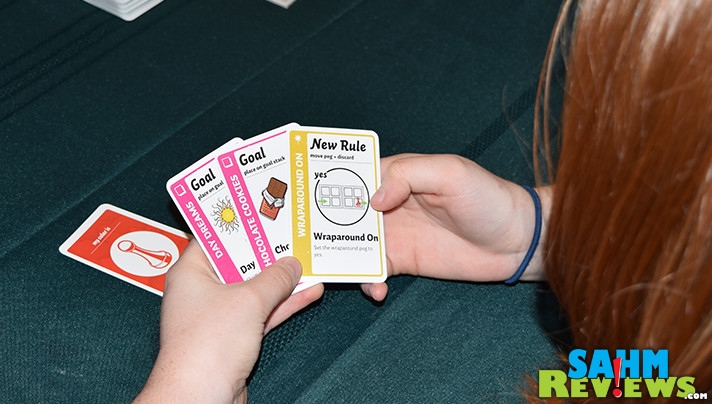 To begin your turn, draw the number of cards as indicated on the rules board. You must do all the pegged requirements (draw, play,  move and discard) before your turn is over. You may play the cards or make moves in any order, but you must do them all. 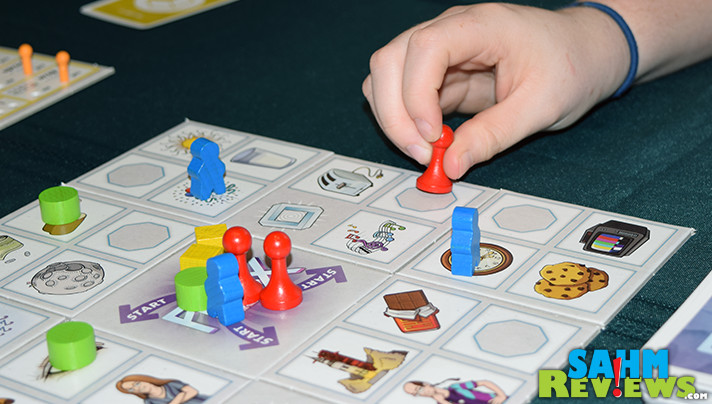 You may opt to split your move between your pieces or use all your moves with one pawn. Make sure you pay attention to the rules because they may have changed since your last turn. If someone toggled the Wrap-Around rule from what it had been, it may completely change your movement plans! The board displays a number of icons which correspond to the various goal cards. In order to claim a goal card, you must have pawns on the spaced depicted on the goal card that is on the top of the deck. Spaces with an Octagon or Portal allow unlimited pawns on the space while all remaining spaces are limited to one character. 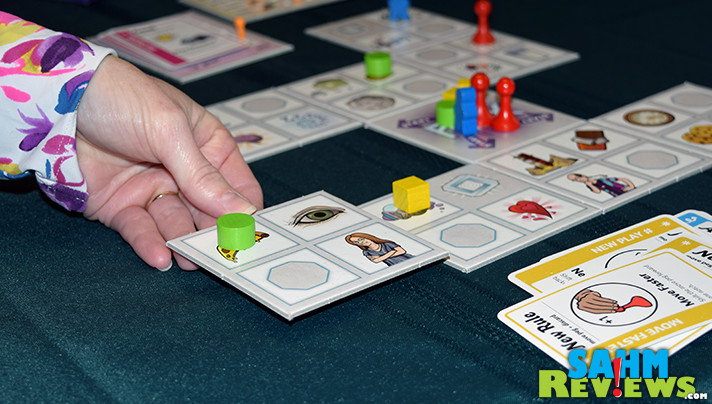 As part of your move, you may bump another pawn off the spot you’re moving as long as there is an open space for them to move. And you know that nice 3×3 grid we talked about? Forget about it. As one of your moves, you may relocate or rotate a piece as long as the rules allow. Of course, you can play a card to change the rule first if you so choose! You’ll finish your turn by discarding to the hand limit. 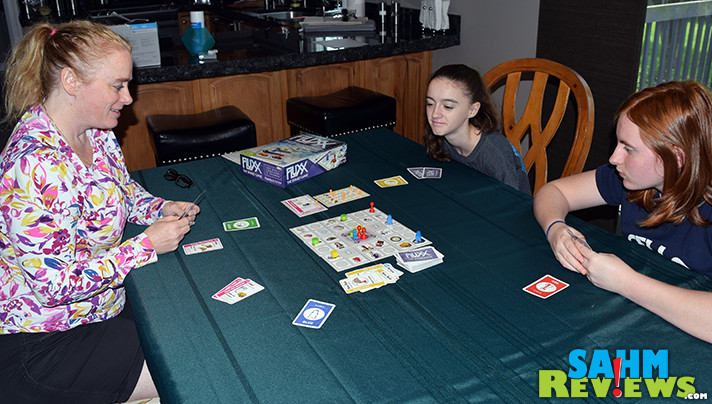 You’ll continue playing cards, adjusting rules, moving tokens and boards and even changing pawn colors while ultimately trying to meet the designated goal as noted on the pegboard. The first player to do so wins. Fluxx: The Board Game is constantly changing but the rules are right in front of you the entire time. If you have reservations about the card games, this streamlines the process and implements some new mechanics that add to the experience. If you’re a fan of Fluxx card games, this one is definitely worth grabbing for your collection. You can pick up a copy of Fluxx: The Board Game on Amazon or buy direct from Looney Labs. Learn about all the latest and greatest changes to Looney Labs’ product line by following them on Twitter and Facebook.

What’s your favorite version of Fluxx?

14 thoughts on “Fluxx: The Board Game Overview”