Last Saturday I agreed to take Kennedy to the trampoline park to celebrate her birthday with a couple of friends. She coordinated it late and sent a final text to two friends on Friday at 11pm with details: trampoline park at 10:30 AM. She woke up to a reply that one would not be able to attend because they couldn’t make it at that time. It opened the door to a great conversation about how the greatest gift any of her friends (or anyone for that matter) can offer her is their time. I explained that time is our most precious asset; it is the one resource we can never replenish or buy more of.

The concept of time as a limited resource lends itself to that mantra, “Work smarter, not harder.” There’s one thing I’ve noticed that is a consistent barrier to new people trying out board games. Investment. I’m not referring to money, but the commitment of time is why they don’t want to try a new game. Sometimes they are scared off by the idea that a board game could take a couple hours to play but more often than not, they are simply overwhelmed by the pieces, the instructions, what to do and where to start. You may recall my take on what it would be like to explain Monopoly to someone who has never played it. It feels normal if you’ve played it, but to someone who hasn’t, it might be a bit much. Don’t get me wrong. I’m not complaining and I’m certainly not chastising anyone for not jumping in. Board games can be very intimidating. With many pieces and unfamiliar mechanics for movement, it can be overwhelming to people who aren’t used to such concepts. And reading directions… well… blech. Who has time for that? 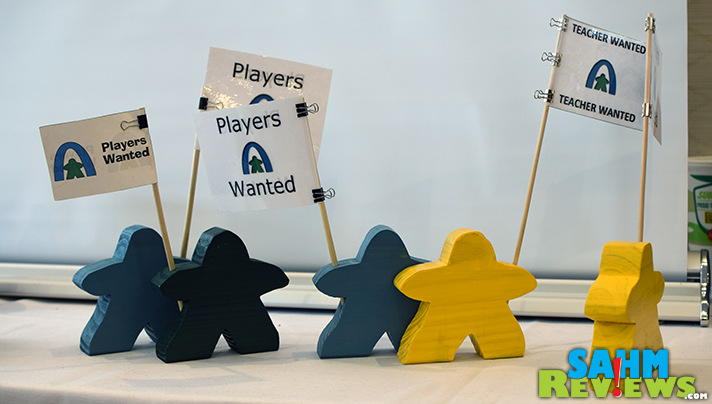 Here at SAHM Reviews, we are constantly learning new games and it would be an understatement to say that we spend a little time reading directions, watching videos and walking through setup. In reality, it takes a LOT of time to gather the information needed to portray games correctly and explain them well for our readers, for people who sit down to play games with us at our game meetup and for family. As technology changes, our approach to comprehending new games is changing. Work smarter, not harder. Dized, an app from Playmore Games, takes the guesswork out of learning a new game by providing a walk-through of the setup process, details on how to play, answers to commonly asked questions and even help with final scoring. Whether there’s one new person to the game or everyone is experiencing it for the first time, Dized is there to help. 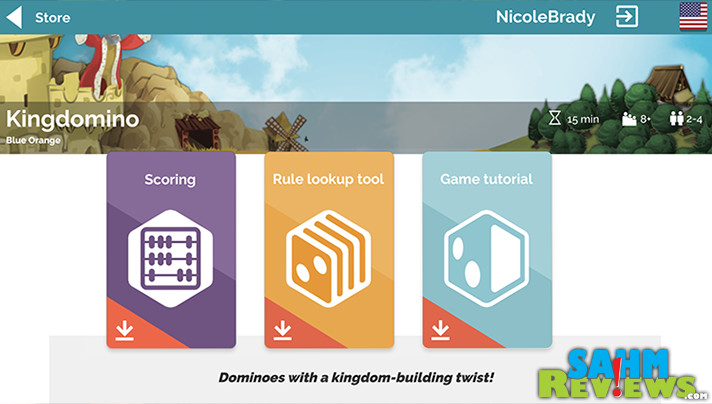 At this current moment, there are two game tutorials available: Blood Rage and Kingdomino. (An overview of Ice Cool wasn’t available when we started working on this article, but is now!) Since we told you how to play Kingdomino early last year, I think it’s a good one to use to explain how Dized works. To start, you’ll need to download the app which is available for Apple and Android devices then select which game you want to learn.

While instructions are in-depth, articles and video tutorials usually only involve the game play. Dized walks you through all the steps to get you playing including what to do the very first time you open the box. If pieces need to be punched out of cardboard and assembled, there are instructions for how to do that. If you’re already past that, you can jump right in and learn to play the game. 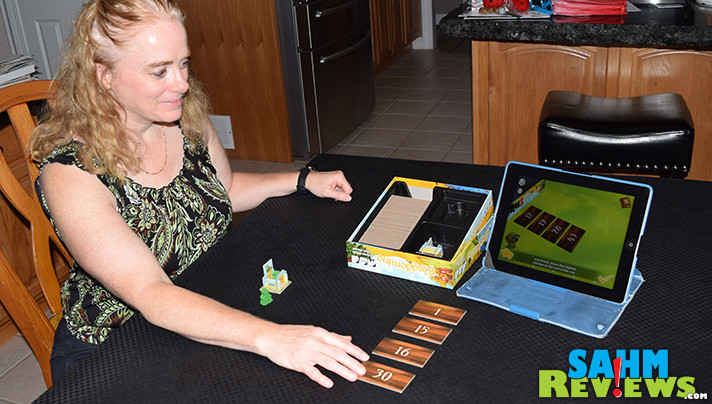 Scratch that. You can jump right in and get playing. No matter how many times I’ve played a game, how simple or complex it is, I always consult the rules to make sure I’m setting it up appropriately. There’s nothing more frustrating that being knee-deep in a game and realizing something wasn’t set up correctly! Dized ensures that you’re doing it as the rules intended… without needing to scan the rules to look for that one thing you’re not positive of. I’ve long wished I could CTRL-F in real life when reading printed materials. Dized kind of does that for me! 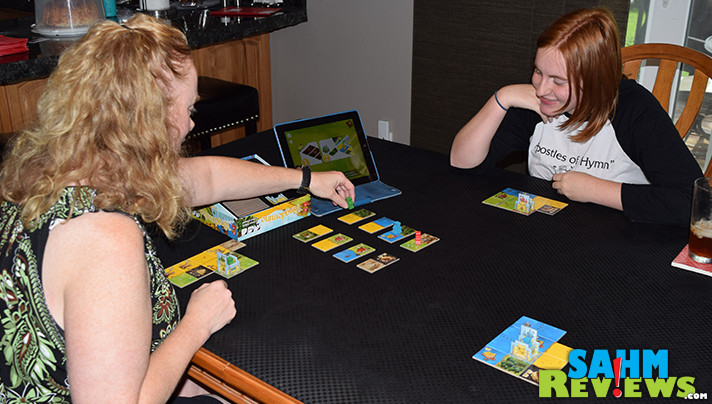 So now that we have it set up correctly, it’s time to play. The app tutorial walks you through what to do on your turn and explains the concept and scoring in the process. When it’s time for the next player, it walks that person through. This repeats to ensure you understand it. There are explanations along the way and a lot of repetition but once you get the hang of something you can skip through quicker by hitting the forward checkmark or arrow in the bottom right of the app. Not sure you understood something? Go back with the arrow in the bottom left. 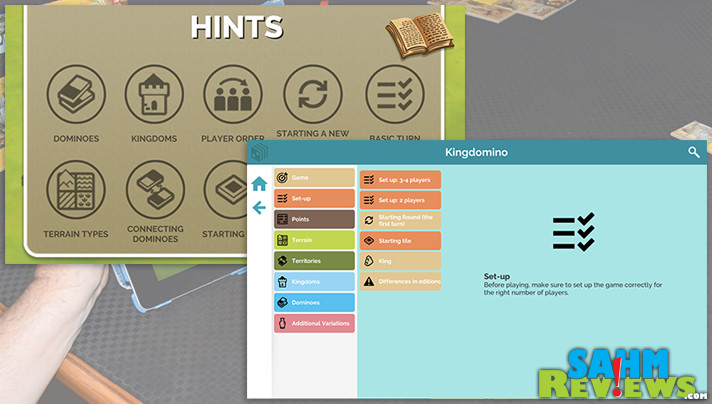 Sometimes when you play a game, you’re not positive about the rules, right? There’s a digital rule book section in the Dized app that lets you shortcut to find the answer. Not seeing it there? Don’t worry! It’s designed to be a living document that changes and is updated as new questions are presented. 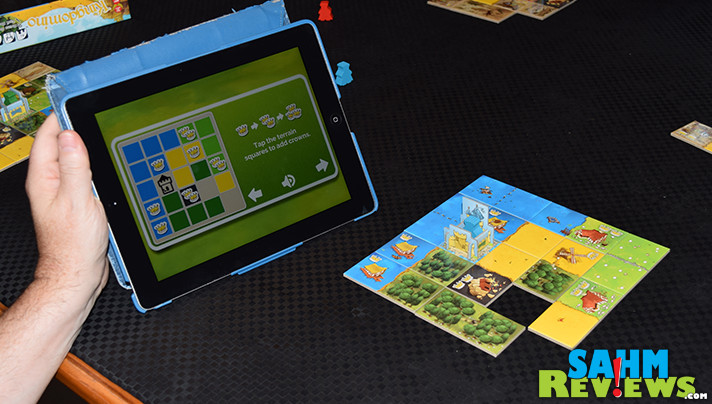 While the scoring explanations are provided within the tutorial (which makes sense since you need to understand how/why you take certain actions), Dized also has a separate section specifically JUST for scoring. This helps ensure that everyone scores correctly, even if you already know how to play the game. While scoring in Kingdomino isn’t daunting, it does involve math and that’s overwhelming for some people. When it comes time to score, you’ll literally recreate your game board on the app and it will confirm your score. The person with the most points wins and Dized lets you know.

The team behind the Dized app have big plans for how to make their app more useful to both gamers as well as the companies who create and sell the games. Their list of tutorials coming soon includes Carcassonne, Bang!, 7 Wonders, Rising Sun, Munchkin Collectible Card Game, Scythe, Potion Explosion, King of Tokyo, Champions of Midgard and Race to the North Pole. However, that is only the tip of the iceberg. Plans for Dized include creating tools that allow publishers to create their own tutorials which will expedite the availability of new games in the Dized library. Their Kickstarter will provide the resources needed to incorporate more adaptive tutorials like those I mentioned above. They will also scale the team in a way for quick development of the external Content Creation Tools, meaning a lot more content made by Publisher will appear in 2019, along with internally made Tutorials for games like Scythe, Carcassonne, and Potion Explosion (to name a few).

I’ll be completely honest and admit that I thought the Dized app was going to be an aggregator of YouTube videos explaining games, but it is far from that. It’s immersive in everything from the time you open the box until the time you put it away. It’s there as a tool, not a crutch, in the same manner that a rule book is. But the advantage is that it’s easier and is audible so all players at the table can follow along. It’s available for download for free on iOS and Android. Follow them on Facebook and Twitter for news about their Kickstarter as well as details on when updates are coming. We’re looking forward to seeing where they take it and what games load next. If you don’t have a copy of Kingdomino to test how the app works, enter to win a copy.

15 thoughts on “Learn Board Games with the Dized App”