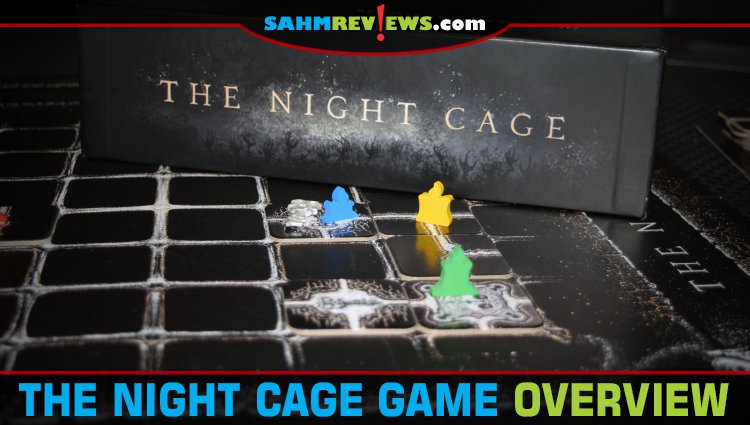 We read hundreds of rule books. Some are one page long while others look like a novel. Some are written thematically to the game while others are filled with jokes and humor. Games can seem overwhelming but as we explained in our Enchanters overview and Reels (Setup, How to Play), sometimes it’s not as hard as instructions make it look. The Night Cage from Smirk & Dagger might feel intimidating based on the 17-page rulebook, but it’s really not. Thankfully, resources like our How to Play The Night Cage Reel on Facebook and apps like Dized make it extra easy to learn.

The objective of The Night Cage is to work together with your teammates to escape the labyrinth by collecting keys and escaping through a single gate. Despite being a cooperative game, you can also play solo! The setup varies based on the number of people but is generally the same. Set up the board, create the candle with the appropriate number and assortment of tiles, give each player a pawn and place keys and nerve tokens on the board. The candle acts as a holder for the draw tiles, but it’s also the timer for the game. When the candle runs out, you’ll no longer be able to illuminate the pathways and your chances of escaping are gone. Each player starts by placing their starting tile and then drawing tiles to illuminate the two pathways around it. Draw a tile from the candle and look at it. Decide how you want to orient it then do so. Repeat with another tile to illuminate the second pathway from the starting tile.

There are different types of tiles. Monsters, gateway, keys, steady pathways and crumbling pathways. I’ll explain how these function as the time arises. While the labyrinth is your prison, it’s also ever-changing. Only paths that are lit will remain on the board. As you step away, any pieces no longer immediately next to one of the players will be removed and sent to the discard board. In addition, the labyrinth edges wrap so movement as well as light on the opposite side of the board are impacted by something on the edge.

On your turn, you have the option to move or stay. You’ll earn a nerve token if you choose to stay. It still causes the wax to burn from the candle, but it’s slower. You’ll only draw one tile and immediately send it to the discard board. If the tile happens to be a monster then you’ll select a tile connected to you and replace it with the monster tile. Crumbling tiles break at the weight of a person. Stand on it too long and it breaks, causing you to fall you into the darkness and land on a space on the edge of the board corresponding with the row/column where you fell. Discard any tiles no longer illuminated as a result of your fall then your turn ends without further action. At the start of your next turn, you’ll continue your fall onto an empty, unlit space along the row or column where your token ended the prior turn. Draw a tile to land on then illuminate all the spaces as normal.

If you opt to move, you’ll immediately remove the tiles no longer illuminated then draw new ones to connect to the paths on your current space. That doesn’t mean you can just place the tile whatever orientation you want. It must connect with your current path.

If you draw a key tile, you’ll place it then acquire one key when you step onto the space. It’s a crumbling space so it doesn’t stay longer than one player. It also disappears should you no longer illuminate it. All players need to acquire and carry a key in order to escape. They’ll work their way to a gate tile and it will open once everyone is standing on the same space.

If a monster tile is drawn, it is placed like regular tiles then becomes motion sensitive. They’ll attack in all four directions when any prisoner moves into, out of or along the pathway they can see. They don’t attack past empty (non-illuminated) spaces nor past breaks in the pathway. They do, however, attack around the edge of the board (if possible) since it wraps.

If you are hit by a monster, the top three tiles of the draw stack are discarded AND the prisoner goes lights out. All the tiles around you are removed and you’ll blindly move one space each turn thereafter until another prisoner becomes adjacent and relights your candle. You can spend nerve tokens to take additional turns, stay in place when your light is extinguished, reduce the number of tiles discarded when hit be a monster, charge onto a monster or sustain the light during final flickers.

When the draw stack is empty, you’ve run out of light to be able to escape. You may continue to work through the illuminated spaces on the board, but may not add any additional (since there aren’t any to add). During this Final Flicker stage, players must discard one lit tile at the end of their turn, hopefully one that doesn’t impact other players’ ability to reach the gate. If everyone gets out, you win. If not, you’ll have to try again! The Night Cage is one of those games that can raise the anxiety level as the game progresses. Dive into the darkness of this spooky game, check out the How To Play The Night Cage video on TikTok then grab a copy from Amazon or from your local game store. We’ve lit up the spaces to their social media pages (Facebook, Instagram, Twitter) so you can find your way to their latest news such as their recent Kickstarter and an upcoming board game about cats!

Would you be able to escape a labyrinth in real life?