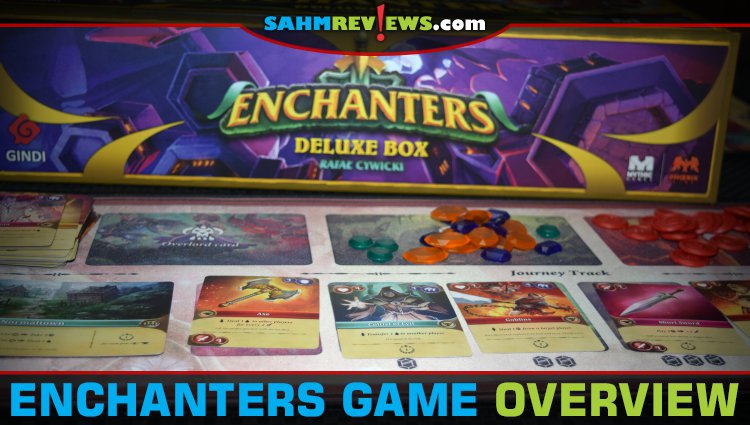 Each year I read no less than 500 game rulebooks. I also keep up to date on the hobby game world by subscribing to almost every publisher’s newsletter. I religiously read ICV2 for breaking news, lurk the /r/boardgames subreddit on Reddit and subscribe to no less than three printed industry publications. If a game is being published, here or abroad, I usually know about it. And yet somehow, I completely missed the 2016 release of Enchanters.

Maybe it’s because it was originally a Kickstarter campaign that didn’t get wide release in the Midwest. Possibly, I looked at backing it but decided it looked like just another 1v1 fighting game. Whatever the reason, I am regretting not digging deeper or searching for a local copy to play. Fortunately, at this year’s Gen Con convention I discovered a brand new Deluxe Edition by Mythic Games which not only updated the original game, but it also included all the expansions published in the past five years!

Since I’m also five years late to the Enchanters party, pardon me for treating it like it’s a brand new game. If you are already familiar with it, scroll down a bit to where I talk about the features of the Deluxe Edition and why you may want to consider an upgrade. If Enchanters is also new to you, let’s take a quick look at the game and what all the fuss is about.

First things first – Enchanters is NOT a 1v1 fighting game, which I erroneously assumed. It is a card-drafting, engine-building card game. Much like a couple of our other favorites, Star Realms or Dominion. However, this game, in our opinion, blows them away. To say we are huge fans would be an understatement. Our regret is not knowing about Enchanters earlier.

Much like Hues and Cues, the entire ruleset fits on one page. As you’ll soon see, this is unheard of in a game with so much variability and depth. The premise is also quite different from other fantasy games. You are not playing a particular character type or race. Instead, everyone begins the game with the same weapon and enchantment and it is those you will be upgrading during the game instead of character stats.

And it isn’t a matter of just acquiring new cards that replace your old ones. Each time you add a card to your item or enchantment pile, some of the statistics from the prior card carry over and add to the abilities of the active one. This is the engine-building part of the game where you’re trying to fabricate a more powerful and versatile weapon to defeat increasingly difficult monsters, which earn you victory points.

Setup is quick as well. All players begin the game with five crystals and the previously mentioned starting item and enchantment cards. A Kingdom deck of new items, enchantments and monsters is compiled by shuffling together four of the included faction decks. Six are dealt out in a line next to the deck, creating a “marketplace” of sorts. A location is also chosen, which will determine the active bonuses and abilities for all players.

On a turn a player will either buy a card from the track or skip their turn to take a rest and possible earn additional crystals or heal wounds. To buy a card, pay the amount shown below each card in crystals and take the card into your inventory. When taking a new item or enchantment, immediately perform any action with a down-facing arrow on the card. Side-facing arrows indicate a new ability that lets you pay for the item on the right side of the arrow with whatever is shown on the left.

You can also pay to fight a monster in the track. Not only must you sacrifice several crystals for the opportunity, you must also have built up enough power (signified by the sword symbol on your item and enchantment cards) to meet or exceed the amount of health of the monster. Monsters will also fight back, doing damage to you in the amount of their attack (claws) less your defense (shields). Don’t worry, you cannot die in Enchanters. Each point of health you are required to lose is represented by wound tokens. These are negative victory points at the end of the game. Put your acquired monster card into your tableau and immediately take any rewards noted. The number inside the wreath symbol is the number of victory points awarded at the game’s end.

After every turn, the cards in the marketplace are moved to the left and the line filled with new ones from the deck. Players take turns in clockwise order until all cards are removed from both the deck and the marketplace. Count the number of earned victory points printed on the cards and subtract wounds still held. The person with the highest final total wins!

Even this introductory game of Enchanters is very enjoyable. While a competitive game, you are not fighting each other (except over cards). Dozens of locations and numerous factions ensure no two games will play exactly alike. You can also play a more advanced version featuring Overlords who must also be defeated. And that’s not even considering the mounds of content provided by the inclusion of all the expansions in the Deluxe Edition of Enchanters!

The base game includes eight factions. The entire Deluxe Edition features over three dozen! It also adds things like a Wounds deck, which must be drawn when a player amasses more than ten wound tokens. Event cards can be added to the deck which trigger once revealed. Banners and Classes add variability to the setup while the Quest deck gives each player a minor action which can be performed on their turn.

You’ll also be rewarded with upgraded components in the Enchanters Deluxe Edition. The base pieces are present and must be punched out of cardboard. But we’re sure you’ll prefer the faceted crystals and plastic tokens. The tokens are screaming to be painted and customized – something you might see in a future article!

And if that isn’t enough, there is also an Automa Deck for single-player games and a complete ruleset for playing in cooperative mode. I’d also be remiss for not mentioning the beautifully illustrated neoprene game mats for both the main playing board and individual players. All of this, as well as a custom organizing tray, is included in this edition!

You can find both the base and Deluxe Editions of Enchanters at your favorite local game store. If you’re quick, you can still pick up copies of the Ultimate Pledge Edition direct from Mythic Games on their website! If you’re curious about what might be in the works and don’t want to miss out like we did, follow Mythic Games on Facebook or Instagram. You’ll even find information about their next project, Rise of the Necromancers, which will be launching in January!

What game surprised you with how easy it was to play?