As we’ve continued to limit our interaction with people outside of our home, I’ve found myself burying my head in games on my iPad. Each night I work on a Killer Sudoku puzzle and during the day (or if I finish the puzzle quickly) then I like to check out iPad versions of board games. I’ve spent countless hours playing LaHavre, Ticket to Ride and Castles of Mad King Ludwig on my iPad. While I have others, these are by far my favorites. Of course, the first one that I was really drawn to is Star Realms from White Wizard Games. I had played the game during our weekly board game meet-up, but it wasn’t until I mastered how to play vs AI on the app did I really fall in love with it. And when I say “mastered”, I’m referring to the game mechanic, the types of cards and the general game play. By no means am I implying that I win all the time… and as a matter of fact, Madison kicks my butt when we play offline. 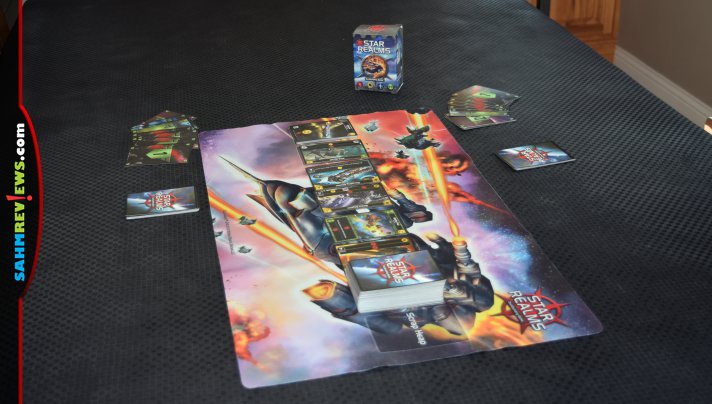 Let me start by saying that Star Realms is a deck-building game for two players right out of the base box. However, you can purchase additional starting decks, alternate standalone decks or expansions to be able to play up to six. As an example, Hero Realms plays up to four. To set up for two players, you’ll give each player a starting hand that contains eight Scout cards, two Viper cards and fifty Authority Points. Set the stack of Explorer cards to the side of the central play area. Shuffle the remaining cards together to form one large draw deck.

Authority cards represent your health in Star Realms. You’ll alternate taking turns over several rounds until someone has run out of Authority. Each turn will consist of three phases: Main, Discard and Draw. Basically, you’ll use the cards in your hand to heal, attack and purchase things then your opponent will do the same. But it isn’t as easy as that because there are a lot of choices for cards and how to carry out those actions. 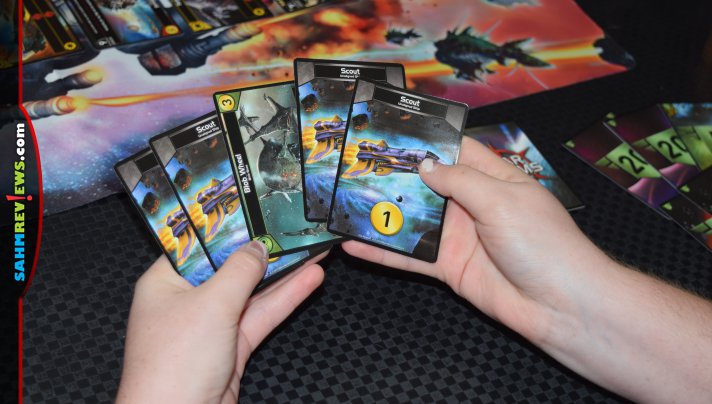 There are two general types of cards, ships and bases. Of each, there are four different factions which I’ll explain in a minute. Each specializes in a different type of ability. Yellow dots on cards are basically coins for purchasing new cards. Combat is represented by a red circle which is used to attack your opponent. Green flags represent Authority and is an opportunity to improve your standing. In other words, those are how you heal yourself.

During the Main Phase, you may take actions in any order including playing cards from your hand, purchasing cards from the trade row, attacking your opponent or their base(s), or scrapping cards to thin and strengthen your deck. To play a card, you take it from your hand and place it in front of you. All the cards in your hand will need to be played during your turn, but the order you place them may impact how the actions play out. When you lay a base, it is placed to the side and acts as a protector until it is destroyed by your opponent. All other cards will be moved to your personal discard pile at the end of your turn. Bases that have a black shield are outposts and protect your Authority for up to that shield amount. If your opponent has less combat that that amount then you’re safeguarded until it is destroyed. White shield bases will remain until destroyed, but combat can circumvent the base and still damage your Authority. 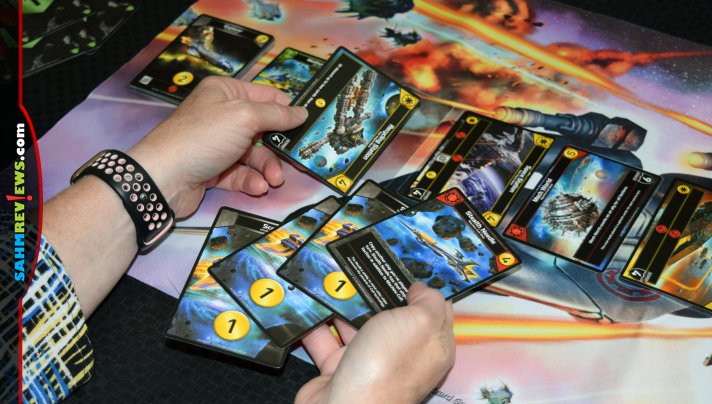 So let’s dissect what’s on the cards. The top of each shows the faction, card name and type along with cost. When you play a card, you’ll trigger the action noted below the picture. The blue faction cards are heavy in trade and Authority while yellow tend to impact your opponent’s hand by forcing them to discard. The red faction has a lot of cards that allow you to scrap (get rid of) weak cards from your deck in addition to having trade and combat. You can use the green faction cards for heavy attacks or to scrap cards from the trade row to prevent your opponent from getting something useful.

Below the initial action will be either a faction symbol or trash can (or both). These are additional potential actions. If you have other cards of the same faction in play, then you’ll also get to take the Ally ability. If you decide to trash your card from your deck, then you can discard it to the scrap heap next to the trade row and take that action. Only cards that have a trash can can be scrapped on their own. All others that you want out of your deck will need to be removed using an action from another card. Bases that stay in place are a good way to get this ally combo ability to trigger, otherwise you’re at the mercy of the shuffle.

After you have played all your cards, made purchases, scrapped cards and damaged your opponent, you’ll move all those expended ship cards to your scrap pile then draw back up to five cards to prepare for your next turn. If your personal draw pile is empty, shuffle your discard pile and create a new draw deck. The number of rounds varies due to a combination of skillfully purchasing new cards for your deck and luck of the draw. You can have an awesome deck, but if your cards aren’t cycling and comboing the way you need, you’ll have to shift your game a bit to accommodate what is available. The ability to manage your deck by adding quality cards and removing weak cards is key to having a successful game. 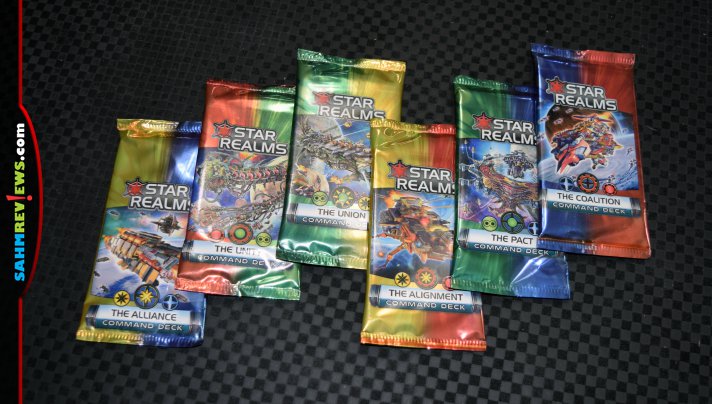 Each game of Star Realms is unique because of the randomness of both the trade row and which cards you draw on your turn. But you can add even more diversity to it by using some of the various expansions such as The Alliance Command Deck and Star Realms Frontiers. As I mentioned earlier, you can play a head-to-head match, play teams with more people or even create a one-vs-many scenario. The deck may be small, but the game play is extensive. If you’re ready to play, pick up this compact and inexpensive game at your local game store, on Amazon or direct from White Wizard Games. I encourage you to visit White Wizard Games on Facebook and Twitter to learn about their newest releases and Kickstarter campaigns.