When someone asks us to recommend a deck-building game, only two games have been on our short list for a long time. Dominion is the most well-known of the genre, and for good reason. Originally published in 2008, Dominion has spawned countless expansions and has been translated into dozens of languages.

The other recommendation is a little more recent (2014). Star Realms has players upgrading their fleet while attacking other players during every turn, trying to eliminate them from the game. With these two titles in your collection, we had always felt there was no need to add another deck-building game. That opinion has changed now that we’ve enjoyed Lucky Duck Games‘ Mutants card game. 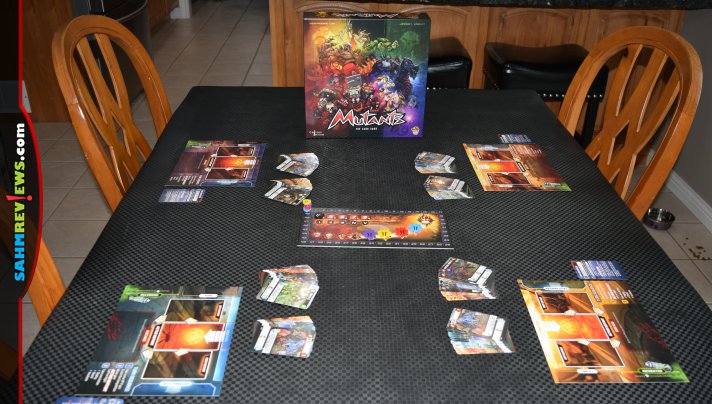 Mutants reminded us of a cross between a deck-builder and Magic the Gathering – the king of head-to-head card battle games. But instead of being only for two players, Mutants supports up to four. And you’re not actually attacking each other. Your goal is to earn points by being higher on the Power Track at the end of each round and be the player with the most points at the end of the game.

When setting up for a game of Mutants, give each person a Player Board, Player Aid and a matching deck consisting of two examples each of the single-gene basic mutants. Shuffle your deck of 12 cards and draw six into your hand. Set the Main Board, which tracks your points and power, in the center of the play area. Everyone will also start with a deck of Advanced Mutants and these can either be drafted in turn order or chosen using a “preconstructed Gene Pool”, which will get the game going quicker. 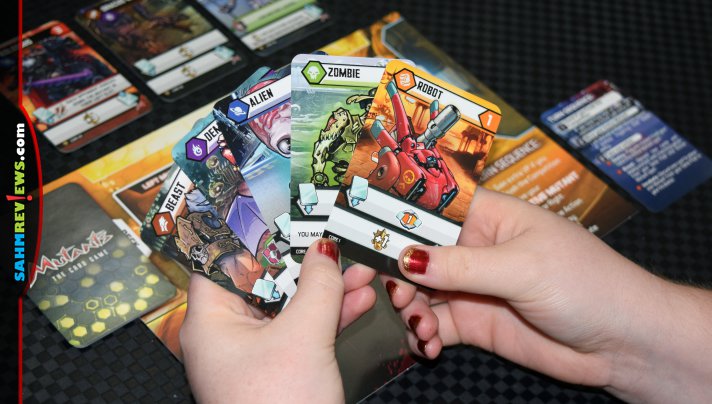 Playing Mutants is very easy, as you would expect from a game of this type. A typical turn is divided into three phases. First, you’ll check the Power Track to see if you “crushed the competition”. This won’t occur in the first round, but on subsequent rounds you’ll earn extra victory points if your marker is on the highest point and at least one of your opponents is in the area marked the “Dread Zone”. 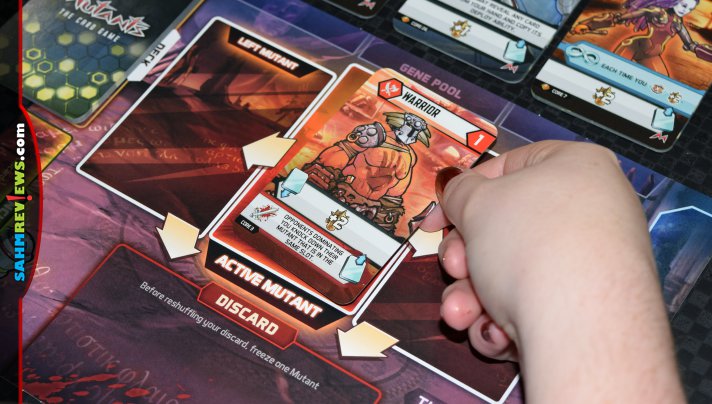 The second stage is moving active mutants on your Player Board. Your mat has three spaces for cards – the center is the active area, and the left and right are where the active mutant will move on the next turn. When one of these is pushed out into the discard area, the cards Leave Ability is activated and resolved immediately. 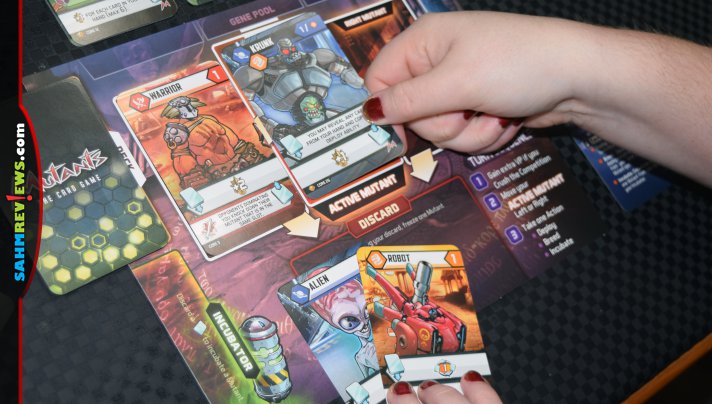 Lastly, you’ll take a regular action for the final part of your turn. You can either deploy a mutant card from your hand into the active area on your board or elect to breed a new mutant by discarding two cards with genes that match the mutant you’re after from your hand and choosing the face-up Advanced Mutant from your Gene Pool, deploying it to the active area. In both examples you will activate the card’s Deploy Ability if it has one. 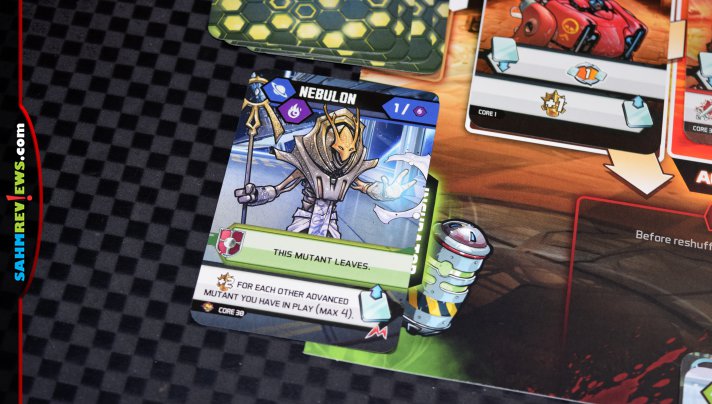 Instead of the above two actions, you can try to get an Advanced Mutant into play in another manner. To Incubate a new mutant, discard any card from your hand and take any face-up mutant from the Gene Pool and place it into your incubator on the left side of your board. At the end of the round, it will be moved to the top of your draw deck.

After you take your action, the next player in clockwise order takes a turn. This continues until all players have no more cards in their hand, which ends the round. At that point, the Power Track is examined, with points awarded based on who is furthest along. A new round is started by moving the Round Marker one spot to the right, moving mutants from their incubator to the top of the player’s draw deck and everyone drawing six new cards from the deck. If you run out of cards to draw, choose one of your mutants from your discard pile and place it into your Cryo-Freezer on the right side of your board. Then, shuffle the cards in your discard area and use them to form a new deck. 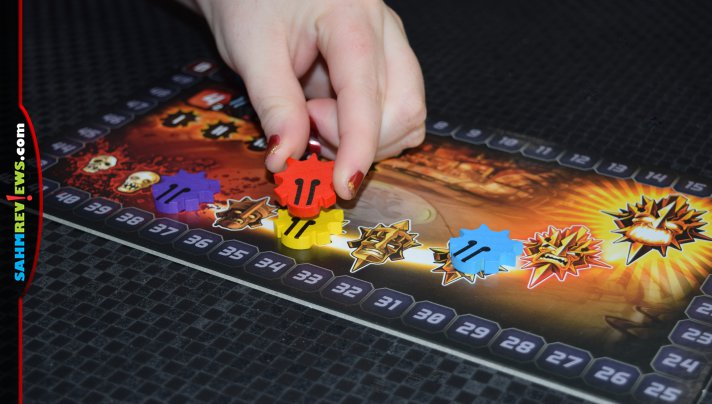 At the end of five full rounds of play, everyone adds the Freeze Value of each mutant in their freezer to their score. Some are worth a fixed value, while others will vary depending upon specific gene symbols in the freezer. The person with the highest overall point total is the winner of Mutants! In the case of a tie, whoever earned the fewest points from the Cryo-Freezer wins.

Mutants is a hugely different game from Dominion and Star Realms and is worthy of a new space in your deck-builder game collection. The only complaint we have is the inclusion of only a small handful of Advanced Mutants. You’re forced to buy one of the expansions if you want to add some real variability to your game. You’ll find copies at your favorite local game store, direct from Lucky Duck Games in their webshop or on Amazon with free Prime delivery. Learn more about possible expansions and new products for 2021 by following Lucky Duck on Facebook and Twitter!

What is your favorite deck-building game?