As a family that includes a high school senior and junior and one parent who is recovering from a life-threatening case of pancreatitis, to say that things have been pretty hectic might be an understatement. In recent weeks, friends on Facebook inquired what moms wanted for Mother’s Day. Some moms said they wanted a “me” day at the spa. Others hoped someone else would do the cooking while others said the ideal gift would be that their kids didn’t fight. Prom was Saturday night with RAP (Right After Prom) rolling into Mother’s Day at 2am. I posted that I was hoping my girls would simply remember to tell me, “Happy Mother’s Day.” Scott planned for us to play Gloomhaven with our friends and we were getting curbside pickup to have dinner with my parents so that by itself would make the day great, even if the girls forgot. Then something interesting happened about this time last week. Scott told me there were plans for the time between gaming and dinner, but I had no idea what. Around lunchtime, they told me we had tickets for an advance screening of In the Heights. Since COVID put a halt to our regular list of movies releasing each month, I honestly hadn’t read anything about it. Before I tell you anything more, let me sum it up with this: Lin-Manuel Miranda (pretty sure he doesn’t need any other form of introduction) and Jon M. Chu (Crazy Rich Asians). I think that combination is enough by itself. Check out the trailer!

In The Heights is the film adaptation of the Broadway musical by the same name. It’s the story of life in New York City’s Washington Heights which is known as the most prominent Dominican community in the United States. It’s a musical about love, dreams and community. Kennedy explained it well, “In The Heights was a fantastic movie. It’s about a Latino family in New York. This musical is one that I enjoyed watching with my family. I got to see many people follow their dreams, even when society thought it wasn’t possible.” Oh, and she was quick to point out that the main character, Usnavi, also stars in Hamilton. Here’s the official synopsis:

Lights up on Washington Heights…The scent of a cafecito caliente hangs in the air just outside of the 181st Street subway stop, where a kaleidoscope of dreams rallies this vibrant and tight-knit community. At the intersection of it all is the likeable, magnetic bodega owner Usnavi (Anthony Ramos), who saves every penny from his daily grind as he hopes, imagines and sings about a better life. 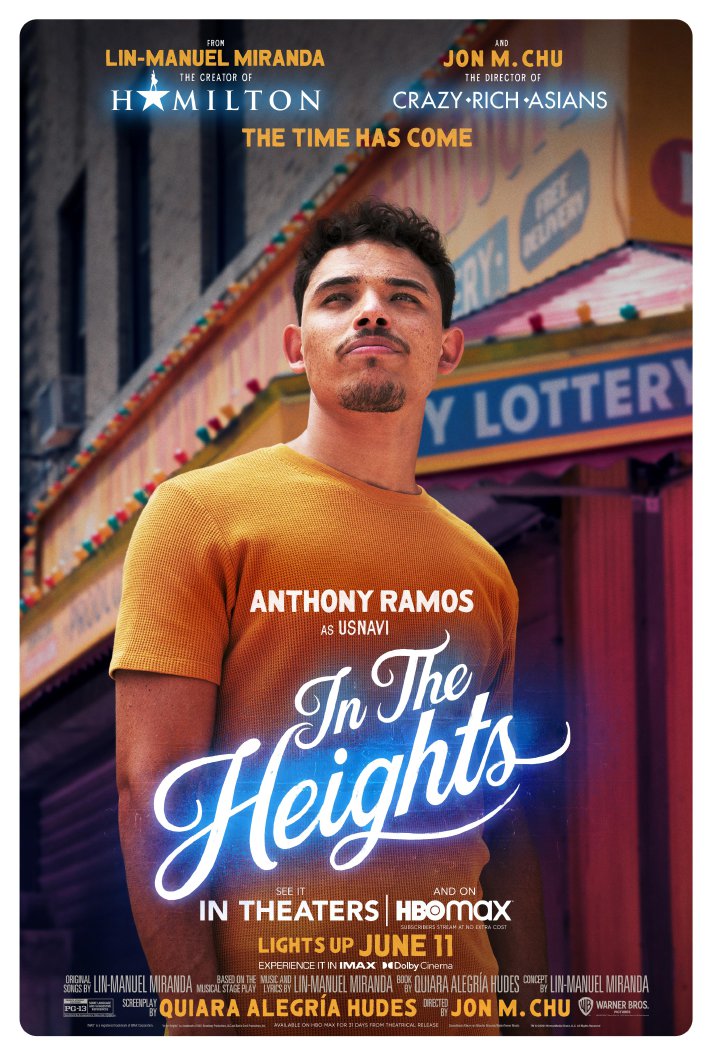 The narrator, Usnavi, shares about his dreams and how community plays into that. What makes it unique is that it isn’t a classic love story or the typical “American dream”, but the hope of a better life in general – wherever that may be. In The Heights tells multiple sides of the life of immigrants including that of an elderly Cuban who recalls the hardships her mother experienced cleaning homes and the ways they displayed grace and maintained their dignity. Another story is about a father, his successful business and making choices so your child has a better future. One young woman fights for her passions while another runs from hers. You see the welcoming nature of the community itself, but also the difficulties that come from striving for success.

I fell in love with the way the characters followed their dreams and how much support they received from one another. Of course, it’s a musical with a lot of dancing and a mix of Latin flare and rap. Not going to lie… I was bouncing around in my seat a bit. I wasn’t alone in that feeling. Madison said, “This movie felt alive; there was never a dull moment.” She said her attention never broke away and agreed that it’s a must-see for people who enjoy movies like Mamma Mia.

I’ve loved musicals since I watched Chitty Chitty Bang Bang and West Side Story when I was a kid. Mamma Mia, Grease, The Sound of Music, Footloose, Yesterday, Pitch Perfect, Sing Street, Strange Magic, Teen Beach, whatever… they’re all wonderful in their own ways. Living in the Midwest, it isn’t often we get to experience a Broadway musical first-hand so film adaptations like In The Heights are a real treat. Theaters around here are open with limited seating so if you’re planning to see this in the theater when it opens on June 11th, connect with your local chain to find out when tickets will go on sale. If the interest in the advance screening is any indication, then it’s not going to be easy to get tickets. Kind of reminds you of Hamilton, doesn’t it? If you’re curious for more scoop, visit the official movie page to see the latest trailers and news!

What is your favorite musical?