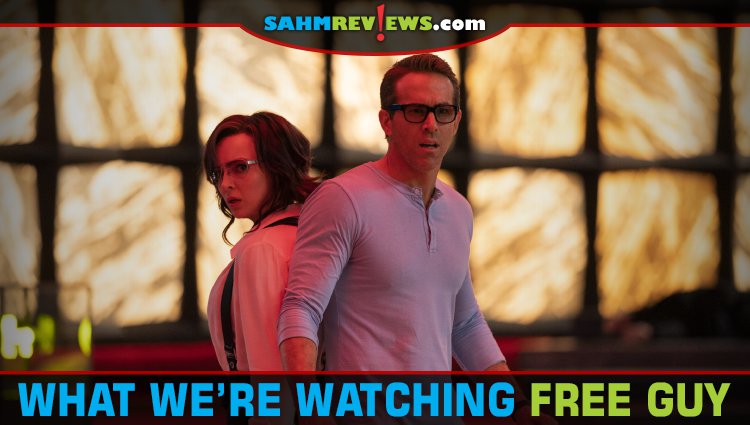 What We Watched: Free Guy Movie

This past Monday was a landmark day for our family as we moved Madison into her dorm room at the University of Iowa. She’s our oldest so Monday marked the first time our family wouldn’t be whole within our home. Family game nights would now be just the three of us and we would no longer need to coordinate four schedules to stream our favorite shows. So on Sunday night when we had a blip of overlap in free space on our calendars, we headed to see the much-anticipated movie, Free Guy starring Ryan Reynolds.

You know that we’re fans of Ryan Reynolds and even took our kids to see Deadpool 2. Don’t worry, we went to see it without them first to make sure it was appropriate for their age and maturity level. We seldom miss out on the opportunity to watch any action movie in the theaters, even going so far as to do private screenings of a few movies when the theaters were mostly shut down due to the pandemic. From the Free Guy trailers and promotional videos, we knew this would include 1) classic Ryan Reynolds snarkiness, 2) Disney and/or Marvel Easter Eggs and 3) Action.

After seeing the movie, I can say that we were 100% correct on all our assumptions. If you aren’t familiar with the movie then you should start by watching the trailer above. Free Guy is a movie about a video game guy, living in a video game world. I don’t mean a guy-in-his-parent’s-basement-playing-games-all-day kind of way. It’s literally about a video game. Guy, played by Ryan Reynolds, is an NPC (Non-player character) that is programmed into it. What unfolds throughout the movie is his awareness that his life isn’t quite what he thought it was. Free Guy is like a cross between The Truman Show, Matrix and Wreck-It Ralph.

That, by itself, doesn’t sound like an action movie so I need to elaborate a little more. Guy, who is a background bank teller in the open-world video game, decides to become the hero. Of course, he’s nudged by a woman who is actually a real-world player of the game. But she isn’t just any woman, she knows her way around a video game. Guy takes an innovative approach to leveling up his character and it’s throwing the game out of balance.

Like anyone who invests their time into a video game, Guy has objectives and some of those involve pretty intense action scenes that can only be appreciated on the big screen with the rumble of professional surround sound. On the flip side, we’re also looking forward to eventually watching it on Disney+ so we can pause and evaluate the massive amount of Easter Eggs that are woven into the story.

I’m trying to avoid spoilers because the movie really does need to unfold in front of you. What I can tell you is that there are other NPCs who are loveable supporting characters along with antagonists who are on the front line of shutting down the only world that Guy has ever known.

Free Guy will be showing in theaters then follow to streaming at a later date. Regardless of whether you have streaming access or not, it’s worth seeing on the big screen! Plus… who wants to wait that long before watching this awesome film. Not us! And there couldn’t have been a better way to send our daughter off on her next adventure than watching a great movie at the theater together as a family.

What would you do if you found out your life was a video game?

15 comments on «What We Watched: Free Guy Movie»