Home / Recreation / Movies / What We Watched: Queenpins, the Movie about Coupon Fraud 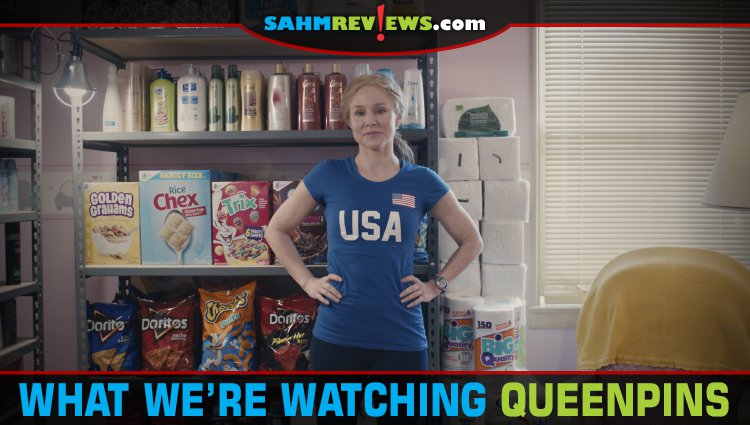 What We Watched: Queenpins, the Movie about Coupon Fraud

I’ve been so excited about finally getting back to the theater. In the past month, we’ve been to see Free Guy twice and Shang-Chi and the Legend of the Ten Rings once. Venom and Dear Evan Hanson are on my list of feature films that I’ve been anxiously awaiting, as was Queenpins, the movie about coupon fraud. Last week, Scott and I were sitting down to watch TV while eating lunch and we noticed the Queenpins is available on Paramount+! I’ve been a coupon fanatic for the bulk of my life and have fond memories of using coupons to save money when our marriage was in its infancy. Scott appreciates tolerates my obsession with coupons so when we saw it advertised on the Paramount+ home screen, he launched it. I mean, coupons plus Kristen Bell seemed like a pretty fun combo to me. Normally, I’m all about seeing movies in the theater, but it was kismet that we discovered it was available to stream.

If you aren’t familiar with the film, it’s based on the real-life fraud case involving women in Arizona creating an illegal business selling unauthorized coupons. And we aren’t talking chump change here. The original scheme involve 40 MILLION dollars in fake coupons. If you’ve ever received a (free product) coupon from a company after sending a complaint (or sometimes a compliment) about their service or product, then you already know the groundwork for the movie. Queenpins revolves around that concept and the idea of selling coupons in bulk via the internet.

Queenpins is about two women who are down on their luck, each for different reasons. Connie (Kristen Bell) has racked up hefty debts after multiple unsuccessful fertility treatments. Her neighbor and best friend, JoJo (Kirby Howell-Baptiste) is struggling with the carnage left as a victim of identity theft.

They stumble across an idea for how to procure and sell coupons and are surprised by how successful their entrepreneurial efforts become. Private jets, lavish cars and plenty of cash are a few of the things they were able to purchase with the profits. It was all going just fine until a grocery chain’s loss prevention specialist realized something fishy was going on and spearheaded an effort to take down the criminals.

Let’s be clear; Queenpins was inspired by the original story. The characters are different. Not only their backstory, but also how many. The method in which they acquired the coupons was changed as well. Even who headed up the investigation doesn’t match up with what happened in real life. I guess we’re supposed to feel sorry for them and agree that what they are doing is okay. It’s not. Stealing is stealing, even under the guise of Robin Hood.

I really, REALLY wanted to love the movie, but can’t say that I did. I felt compelled to watch the entire thing in hopes that it would redeem itself, but I cannot say that it did.

Aligned with the premise of the movie, I feel the need to point out the takeaway: We saved a lot of money by skipping the movie theater and streaming it on Paramount+. If you don’t have a subscription, you can sign up for a free trial. And the extra bonus… that same subscription gives us awesome originals like Star Trek Discovery and Star Trek Picard, network shows like Survivor and a host of movies, sporting events and more.

What is a movie that left you feeling disappointed?

22 comments on «What We Watched: Queenpins, the Movie about Coupon Fraud»