Home / Recreation / Movies / What We Watched: Shang-Chi and The Legend of The Ten Rings 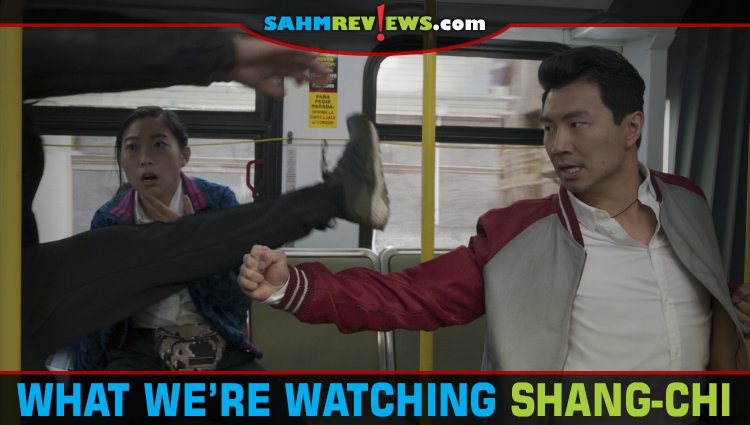 What We Watched: Shang-Chi and The Legend of The Ten Rings

After hearing how much fun Madison was having since starting college, I wasn’t sure she was ever going to want to return home. Thankfully, she still made her sister a priority in her life and returned home to celebrate their first birthday apart. They both had a lot of commitments so we used the little family time together to attend the opening weekend of Shang-Chi and the Legend of the Ten Rings. It’s a movie we had been anxiously awaiting for quite some time and it seemed fitting that we see it together.

We’ve harped numerous times about Marvel (and Marvel-adjacent like Free Guy movie) so that’s one of the reasons we wanted to see it. But we were especially excited about the casting as we had already grown to love Simu Liu for his work in Kim’s Convenience. That sitcom is filled with people who we hope to continue to see elsewhere. Seeing Jung not just in another show, but cast as the hero was awesome. I can’t personally speak to the cultural importance this movie, but I do believe that everyone deserves to have idols they can relate to.

Shang-Chi and the Legend of the Ten Rings is about a young man who must face the reality of a past he thought he left behind. The problem wasn’t something he had done, but the sheer nature of his lineage. It’s a sad truth that your past will someday catch up with you, but in this case it turned him into a hero. The movie begins by showcasing a couple of friends, Shaun (Simu Liu) and Katy (Awkwafina). With that in mind, let’s address the pronunciation of the title because it seems to be a common issue. At one point in the movie, Shaun explains to Katy that his real name is Shang-Chi. They banter back and forth about the name and “Shang” essentially sounds like Shaun but with a “g” sound on the end. She jokes that he is trying to hide from his past by changing his name but essentially changed it to something that sounds about the same.

What seems like a normal day turns into a nightmare as Shaun is attacked by a coordinated group of assassins. Unbeknownst to anyone in his new life, he’s not just your average Joe. He channels his knowledge of martial arts and fends off many attackers. This spoiler-free explanation of the movie kind of limits what else I can say regarding that aspect of the plot. What I can share is that the action scenes are a blend of the styling of a traditional Marvel movie with that of a Jackie Chan movie. Those of us who grew up watching Jackie Chan will appreciate the artistry of the fight scenes and how he utilized the environment as part of his defense.

But Shang-Chi and the Legend of the Ten Rings isn’t only about Shang-Chi’s journey, but also that of Katy and his family, including a sister. Actually, the movie is named for the rings that give his father power, strength and immortality. If you aren’t already familiar with who the villain of the movie is then that should be a pretty hefty clue.

With respect to Xialing, she isn’t just an ancillary character in this film. She’s meant to be something more. With skills that would match or exceed other Marvel lead characters, she consistently holds her own. We learn a bit about her backstory and see how she took control of her hardships and made the most of them. Her story is not only relevant to Shang-Chi’s story, but I am certain we will see more of her in future MCU content.

Because this is the story of a new hero, we actually dive back into his past quite a bit and learn about his parents, how they met and the life they built together. While we only see his mom briefly, it would be cool to see her backstory because her approach to conflict is very different than we normally see. I don’t want to go into more for fear of spoiling anything, but I can say that I wish she had a larger role.

Shang-Chi and the Legend of the Ten Rings is filled with action as well as a lot of comedy. One of the first scenes offers a Kim’s Convenience reference when Shaun explains he isn’t even Korean. There are plenty of Marvel references including some to early Iron Man storylines. While movies such as Avengers: End Game require that you have a strong working knowledge of prior Marvel films and shows, Shang-Chi and the Legend of the Ten Rings stands on it’s own merits. Someone who has never watched other Marvel movies should still understand (and hopefully enjoy) it while a Marvel fanatic will pick up on some of those Easter Eggs. It’s an excellent movie and if you decide to watch it, be sure to do it at the theater first. Marvel movies may be awesome when viewed at home, but they shine on a big screen with sound that rumbles you out of your seat. If you decide to go, be sure to stay until the end of the credits.

Do you plan to see Shang-Chi and the Legend of the Ten Rings in the theater?

One comment on “What We Watched: Shang-Chi and The Legend of The Ten Rings”