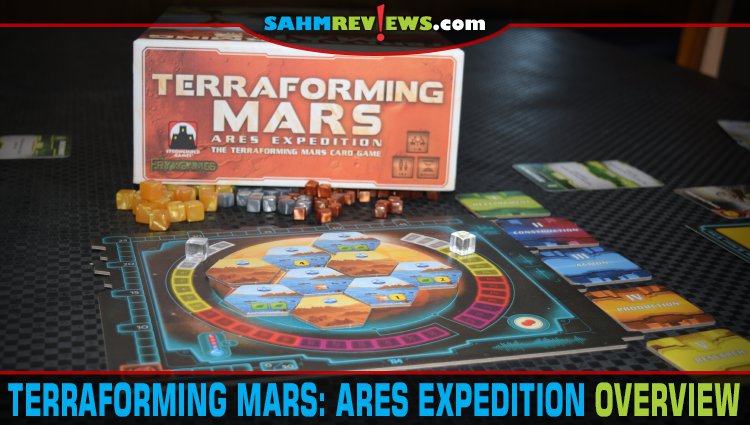 Considering that we spend a lot of time sharing about board games that have gone viral and movies getting buzz, I’m not one for hype. I never have been. Maybe it started when I was a kid and couldn’t afford the clothing brands that all the other private-school girls were wearing. Maybe it was because more than once I’ve been disappointed by movies that were I expected to be good. That holds true for board games as well. When everyone went crazy for Terraforming Mars from Stronghold Games, I found other games to play. I’ve given a few other games a shot after hearing people rave and been let down. When Terraforming Mars: Ares Expedition was released, I decided it was probably safe to test the water since most of the hype was still on its namesake.

The original Terraforming Mars game had a lot going on. Enough so that people relied on custom trays to keep everything organized. Terraforming Mars: Ares Expedition is a more compact game while staying true to the theme of the original. It’s an engine-building game with the goal of making Mars inhabitable. When you’re setting up the game, you’ll normally shuffle all the project cards together. Until you get the hang of it, however, you can utilize the starter cards. This concept means that you’ll have plenty of replay options once you get the feel for how to play. Each player takes a personal board and cubes and phase cards of their chosen color. Then the main board is set in the center of the table with phase tracking tokens locked in the appropriate spot. Create a general supply of resources then randomly fill the main board with the face-down ocean tiles. Deal corporation and project cards based on preferred difficulty level. Players place their terraform rating marker on space 5 of the track then gain starting resources.

There are two types of boards in the game. The main board tracks the oxygen, temperature, oceans, phases and rating for all players. The game will end when the oxygen and temperature tracks reach their max and all ocean tikes have been revealed. Each player has their own individual board for tracking production and resources. Before beginning, players select a corporation card and collect the associated starting resources.

Project cards are the meat of Terraforming Mars: Ares Expedition. Within the deck are an assortment of several types of cards. These will be used to ramp up production, earn resources, adjust the required terraforming tracks on the main board and more.

The game takes place over multiple rounds, each consisting of three steps: Planning, Resolve Phases, End. In the planning step, players select a phase to activate for the round. While this is what their main focus will be, they’ll still be able to participate in other phases that are activated by other players. Only phases that are selected by at least one player will be implemented for the round. Each phase includes a primary ability that all players may take in addition to a bonus for any player who selected that card.

There are five phases that are resolved in order: Development, Construction, Action, Production and Research. When playing a development (green) project card, pay the cost of the card listed on the top left then earn any bonuses indicated on the card. The icons below the cost indicate discounts that may be taken if you meet the designated requirements (such as production of steel or titanium). In order to play a red or blue card, the Construction phase needs to be activated during the planning phase. These are how you build your engine.

During the action phase, players trigger all the actions on their various cards. The box in the bottom left of the card indicates which phase a card will activate. Examples include spending resources to earn other resources, cards or terraform the main board. In addition, there are standard actions listed on the bottom of the player boards, each potentially raising the player by 1 on the TR track. Standard actions include spending plants or MC for forest victory points, thus raising the oxygen one step. The temperature track can be raised by spending heat or MC. Ocean tiles are flipped by spending MC. During the production phase, players collect resources from green and corporation cards as well as place on the TR track. The Research phase simply involves drawing and discarding cards. After all five phases have been completed, players discard down to ten cards, earning 3 MC for any discarded cards.

Terraforming Mars: Ares Expedition ends immediately after the phase in which all ocean tiles are flipped and the temperature and oxygen tracks have reached their optimum levels. The total victory points are a combination of the points on the TR track, forest VP tokens and any VPs listed on cards in play. Since not all phases activate each round, the game moves quickly. There’s a lot of iconography, but the cards are designed to make it easy to remember what cards activate and when. Terraforming Mars is available through your local game store, at Target or on Amazon. You can follow Stronghold Games on social media (Facebook, Twitter) to see what else they’re terraforming in the game world!

Have you played the original Terraforming Mars game?