You’ve heard the phrase time is money. A couple weeks back I told you about the Dized app to help you learn how to play board games because instructions can often take a lot of time to read and comprehend and, you know, who has time for that? This is where I have to step back and admit that I’m not the one that usually reads the directions anyhow. Our friend, Doug, is our personal trainer for many games that we play. He reads the instructions, watches how-to videos, reads forums online and gets a full-fledged grasp of the game.

Then he teaches it to us.

Sometimes he can set up a game, provide an overview of the rules and have us up and running in under 10 minutes. Then there are the more complex games that take so long we could have played a half dozen games of  5-Minute Chase or Escape the Curse of the Temple in the same time frame. Okay, so maybe that’s exaggerating a little, but in the case of Feudum from Odd Bird Games, it’s totally accurate. Feudum had been on all our wish lists since we came across it at Geekway last year, so Doug offered to learn and teach it. When we recently sat down to play, I lost track of how many times I thought he sounded like an infomercial pitchman. “But WAIT! That’s not all!” You might be asking why it would take so long to set up and teach a game. You also might be curious if something so daunting is actually worth the effort. The long and the short of it is this: It only takes a long time the first time around. After that, it’s quicker. Think of it like learning to drive; there’s a whole lot more to it than just turning the key in the ignition when you are first learning. After that, it’s effortless. 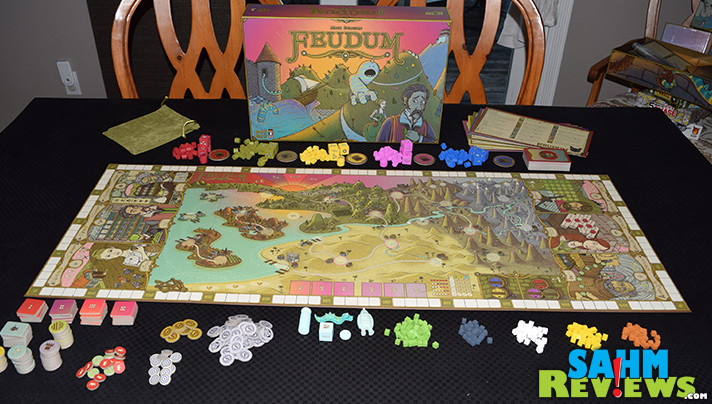 Usually when we talk about games, we tell you about the components and setup and offer an overview of the rules. That’s not going to happen here, sorry. There’s simply too much going on. So the goal of this overview is to give you a glimpse of how this game plays so you aren’t overwhelmed when you open the box and start to read the 23 page instruction booklet. When you set up the game, use a large table if at all possible because it’s not a small board. Some games utilize a board with a small footprint then require a lot of space surrounding it. That’s not the case here. In addition to the board, each player needs to have space to lay cards and store some pawns and tokens. Pools of components such as location discs, vessels and money can be arranged around the board to form a general supply while cubes representing goods will go into a haversack. Starting locations are populated with discs and 24 Region/landscape tiles will be randomly placed on their spaces on the board. Players are given 3 pawns of their color, 4 player discs, 11 action cards, 7 influence markers, shillings, food, a pouch and a reference card. 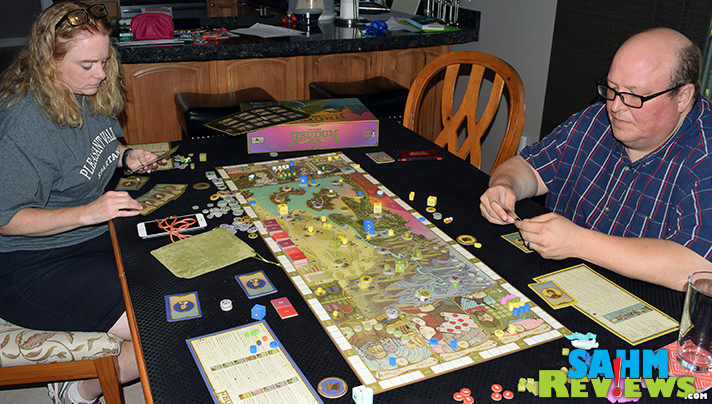 What’s a Feudum and what’s the the point of the game?

That’s probably your first question. I know it was mine. A Feudum is a fiefdom, land granted by a feudal lord. You’ve been cast out of the kingdom and you’re trying to earn glory and fame. As with most strategy games, the goal is to have the most victory points at the end. For Feudum, it means to have the most veneration points (victory points) after 5 epochs (eras/phases). Looking at the board, you’ll see lands of different color with designated areas among them. Around the edges, you’ll notice six guilds of different types. The areas are where the movements take place, but the guilds are the meat of the game. You’ll need to place, improve and control the areas, while working to secure status in these guilds. But wait, there’s more… 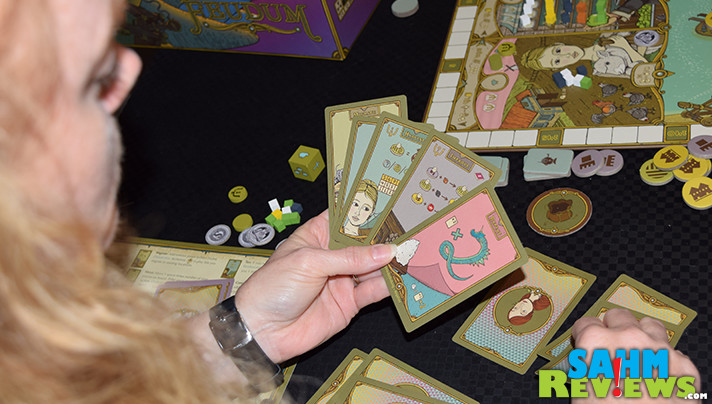 Each player has 11 action cards. These cards are used to determine the four actions you plan to take for this round and you’ll go around the table taking turns playing them. Actions range from moving around the board in order to pilfer goods, taxing, harvesting, conquering, placing influence tokens on a location or improving a location you already influence. 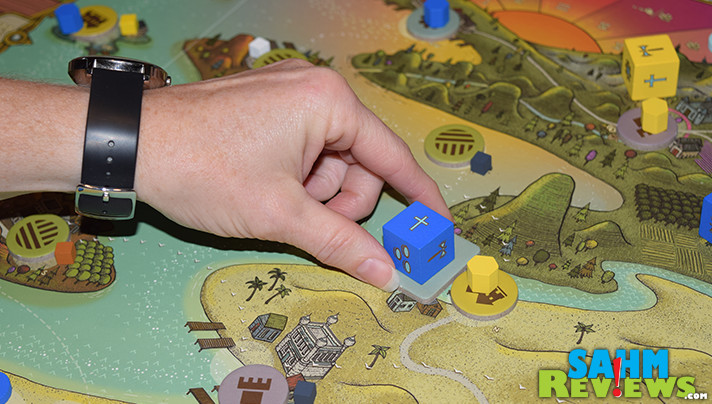 I could go into more details, but since there are 11 action cards, some with secondary actions on them, that would substantially increase the length of this article. Plus, we have other things to discuss anyhow, because “in addition to that, you also get…” (You should have read that in your best Billy Mayes, Anthony Sullivan or Ron Popeil infomercial voice.) 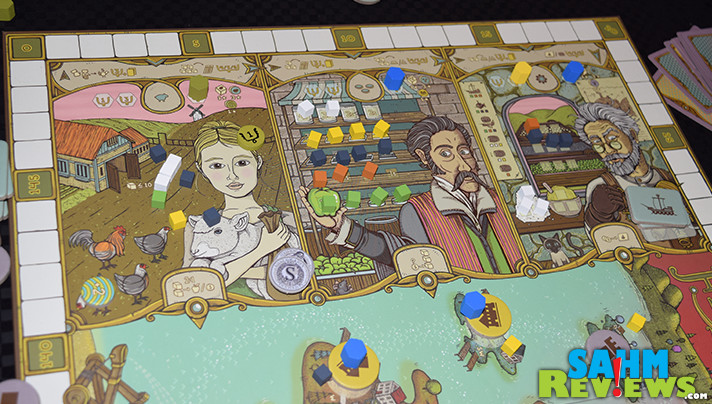 We didn’t even get into the details about the guilds. Basically, the various actions you take give you credibility with the appropriate guild. The highest ranking player is the guild master and the second is the journeyman. Not only are these positions a source for victory points, when someone chooses to take a guild action, a portion of the fee goes to each of these other players. The guild master is able to push resources out of their guild while a journeyman pulls resources into the guild. You may want to perform a particular action, but if there aren’t resources within the guild to take, then you’re kind of out of luck.

As you make improvements, you’ll get to draw a region tile and score accordingly. At the end of each round, the progress die is rolled and one of the region tiles is removed at random. This is one of the many ways that the game throws a wrench in your strategy. After the progress die is rolled, various victory points are determined and awarded, the starting player changes and the Epoch marker is checked for progress. When the 5th Epoch is triggered, the game is almost over. Well, it’s almost over on the table, but it won’t be over in your head. There’s so much happening and so many “I should have” thoughts that you’ll want to get it to the table again! 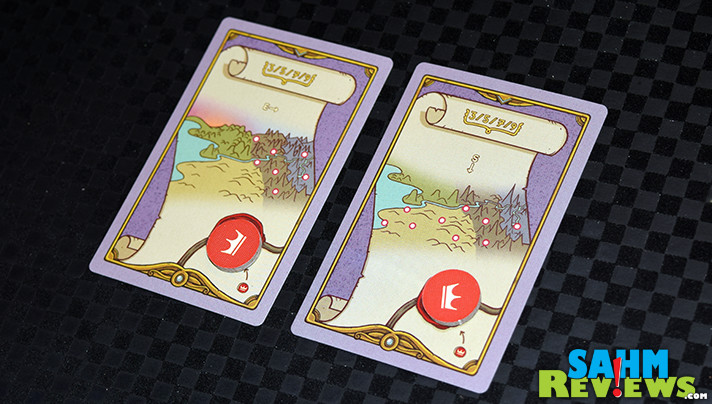 Did I mention yet that there are end-game scoring options also? There are. See what I meant when I said there’s a lot going on here? This is truly only a glimpse of all the things happening in Feudum. When we first sat down for the marathon training session with Doug, I thought it was going to be overwhelming. It was a lot to take in, but it gets quicker with each subsequent trip to the table. As if that wasn’t enough, there are a variety of expansions that add even more depth including one that adds an additional player to the mix.

If you’re looking for a game with a lot of meat to it, Feudum is worth checking out. Learn more about it on the Odd Bird website or see what people are saying about it on Instagram, Twitter and Facebook. You can pick up a copy of the base game on Amazon as well as some of the expansions. Just don’t get discouraged when the first time through it takes longer to learn. It’s worth the investment in time to get this one to the table.

Have you ever given up on a game because you thought it might be overwhelming?