How many times have you sat down to play a game, only to have it run WAY longer than the advertised time? I’ve lost count of the number of times we’ve scheduled a game that is supposed to run 2-3 hours, only to have it stretch into 6+. Normally we’re completely fine with the extended session as long as we’re having a good time. But sometimes we have to call it quits early because it gets way too late or something else on our schedule takes precedence. We hate leaving a game unfinished!

On the other end of the spectrum, there are a lot of titles that advertise themselves as quick games. These too rarely perform as advertised since the estimated times don’t include things like explaining the rules or game setup requirements. At this year’s Origins Game Fair we did discover one that lived up to the name! 5 Minute Chase by Board & Dice not only was as short as advertised (5-15 minutes), the extremely fun game play had us wishing it lasted longer! 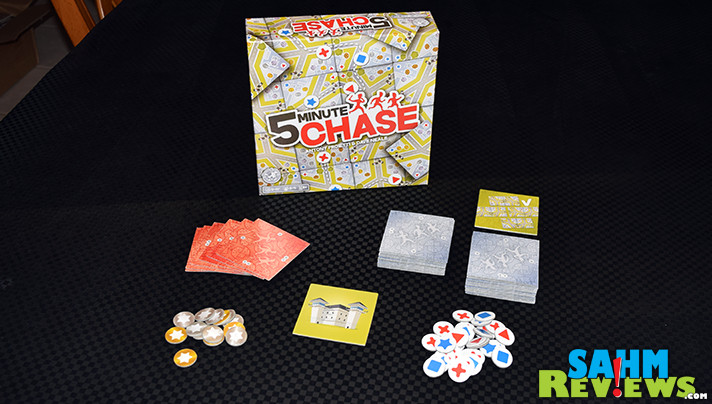 The premise behind 5 Minute Chase is that there has been a crime committed and one person (or team) is trying to catch the runners (prison escapees) from the other team. In a 2-player game, one person acts as the police while the other controls the criminals. A third player teams up with the bad guys, while a fourth helps the po-po. We found the game best with three, with two being a close second. As you might imagine, the goal for the Runners is to get to their hideout while collecting loot along the way. The goal of law enforcement? Catch the Runners! 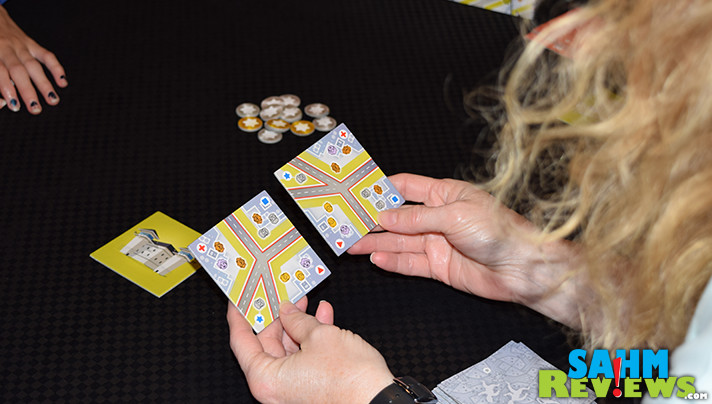 Setup is very quick as the only thing laid in the center of the play area is a Prison Tile, representing the starting location for everyone. The Chaser (police) takes all the chaser markers from the supply, while the Runners shuffle the six starting tiles and one randomly draws two into their hand. The starting tiles are kept hidden from the opposing team and decided how to lay them next to the prison. Once played, the game immediately begins with both players (teams) acting at the same time in real time!

The other remaining tiles are divided into two stacks in which the active runner will work from. They may pick up one stack and look through them for tiles to play. There are some basic rules for laying tiles. They may only be placed within the physical play area (don’t let them run off the table). A new route tile may only be placed next to ONE other tile and it must be the one previously played. Obviously streets must connect on adjacent tiles, but they too must follow certain rules. Police roadblocks may not be adjacent to an empty street nor another roadblock. It may only be next to trees! And once a tile is placed, it cannot be picked back up or rotated. 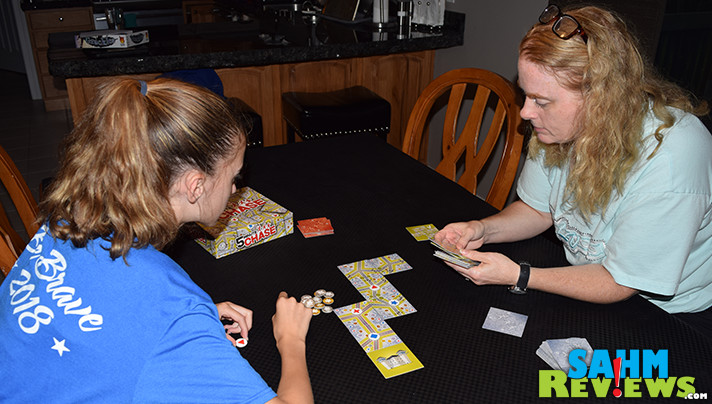 The Runners are considered to be “on” the most recently placed tile. But before the Runners can get to a hideout (by placing a hideout tile), they must collect three unique items along the way. Tiles with a map, money and keys must be traveled through before the hideout tile can be placed. If the Runners successfully reach a hideout, the round ends immediately.

At the same time the police are trying to chase down the Runners (remember, they start two tiles behind). To do so, the Chasers must look for witnesses and ask them “which way did they go?”. This is done by examining the tile played and looking for the direction in which the witnesses are facing. There are four sections on each tile which are marked with a unique symbol. You must look at the tile and determine which section has the most witnesses facing in the direction of the next tile the Runners laid. Place a token with a symbol matching that section on the tile and begin resolving the next one. 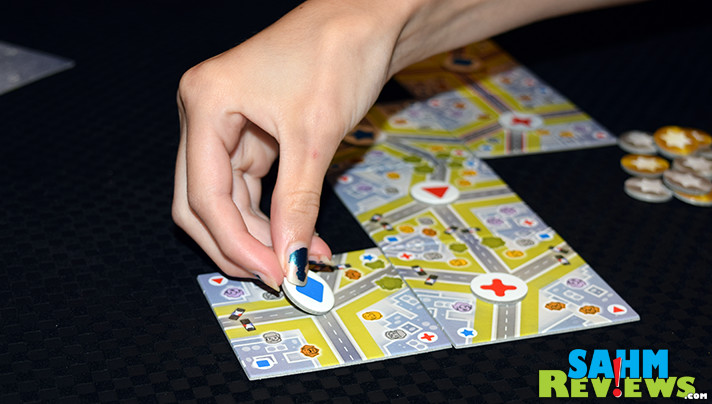 If you are able to catch up to the Runners before they place their next tile, quickly determine how many witnesses are looking at the tile they came from (instead of the one they’re headed to) and play the correct token! This also ends the round immediately!

Because everyone is acting at the same time in 5 Minute Chase, it is very likely someone will have made a mistake. At this time you check that every tile placed by the Runners has been located correctly. If there were any mistakes, mark the tile where the first mistake was made by slightly rotating the tile. If there were no mistakes and the Runners made it to the hideout, it is considered a victory and the team gains one Perfect Victory Marker. If there was a mistake, or the Chaser claims to have caught the Runners, their answers must be checked. 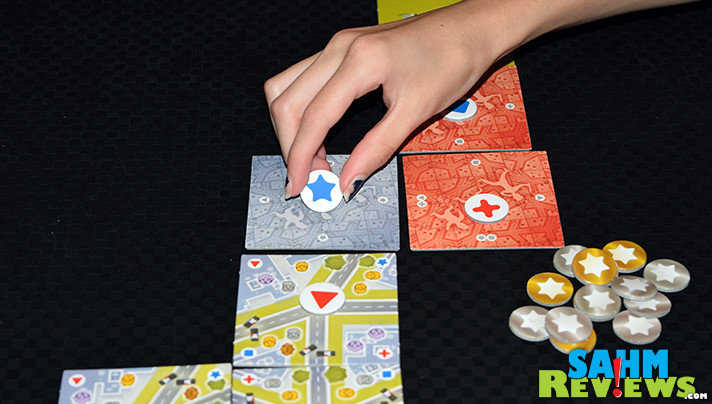 Flip each tile in order so that the same side is still facing the direction of the escape. On the back of the tile the correct symbol is listed, and if it matches the Chaser’s answer, move on to the next tile to verify. After verifying all tiles, if the Runner had made mistakes and the Chaser did not, then the Chaser wins the round and gains one Small Victory Marker. Appropriately, if the Chaser made mistakes while the Runners were perfect, the Runners win. If both were in error, whoever made the mistake first (by order of tiles) loses. If the mistake occurred at the same time, nobody wins the round. 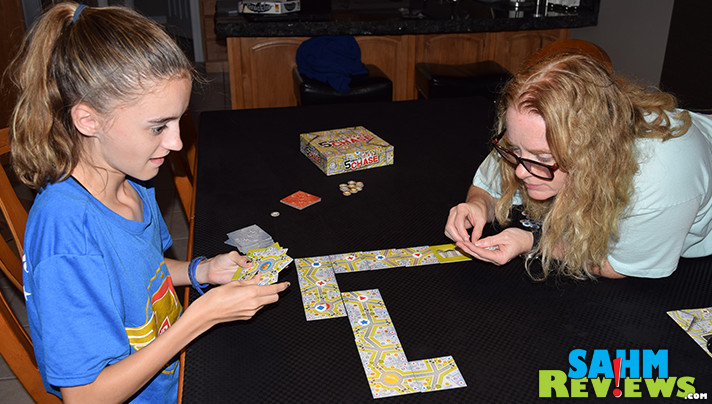 Players then change sides and play another round. The first person to obtain two Perfect Victory Markers, one Perfect and one Small, or three Small Victory Markers is the overall winner of 5 Minute Chase! Because each round literally lasts only a minute or two at best, keeping the entire game to 5-15 minutes is rather easy!

If you’re lucky enough to travel to one of the major game conventions, you can pick up a copy there, otherwise, you should be able to find copies of 5 Minute Chase on Amazon. Alternatively, you can easily grab a copy on eBay from UK sellers for a very reasonable price! And this won’t be the last title you see from Board & Dice coming to the shores! Make sure you’re following them on Facebook and Twitter to see what they’re importing next!

What length of game do you prefer?