You don’t have to be a thrill-seeker to enjoy a trip around the racetrack, but it certainly makes it more fun when you are! On June 16th, Cars 3 hits the big screen and in anticipation, we were invited to Sonoma Raceway for a special Cars 3 media event. They had a full day in store for us with a trip to the garage, a pit stop lesson, a trip around the track as well as an informative “History of Racing” presentation. 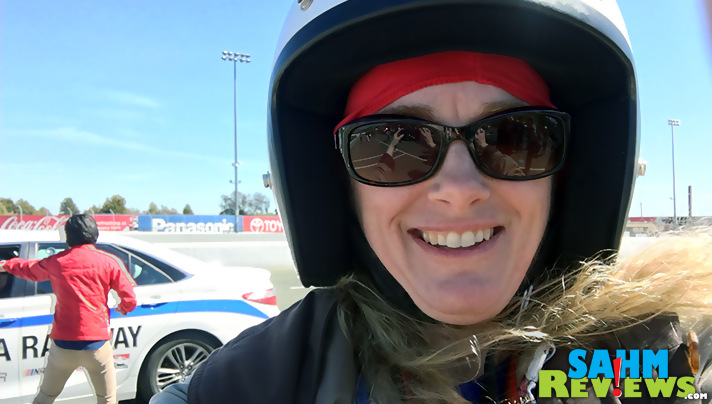 Laps at Sonoma Raceway for Cars 3

You know I can’t resist a trip around the track. It’s so much fun! With helmet on, we handed over our purses, laptops, handheld devices and anything else that couldn’t be buckled in. Three of us at a time climbed in vehicles with a professional driver then zoomed around Sonoma Raceway’s road course to get the feel of what it might be like to be Lightning McQueen, Jackson Storm or Cruz Ramirez. Unlike an oval track common to NASCAR, a road course has turns going both directions with a mix of short and long straightaways and hairpin turns. We were subjected to tosses and turns to our right and our left and our right and our left and… I sat in the back thinking of Doc’s “Turn right to go left” advice to McQueen and may have even said it out loud.

As we were loading into the vehicle, we were advised not to go over the wall until we were cleared to do so and even then we needed to proceed with caution while entering and exiting the vehicle. It made me recognize the amount of danger the pit crew is in each time they jump the wall to change tires. At one point during the day we even had the privilege of learning the process of changing a tire and were challenged to do so ourselves! I teamed up with my friend, Ari from Love, Peace & Tiny Feet, and we discovered that those things are heavy! 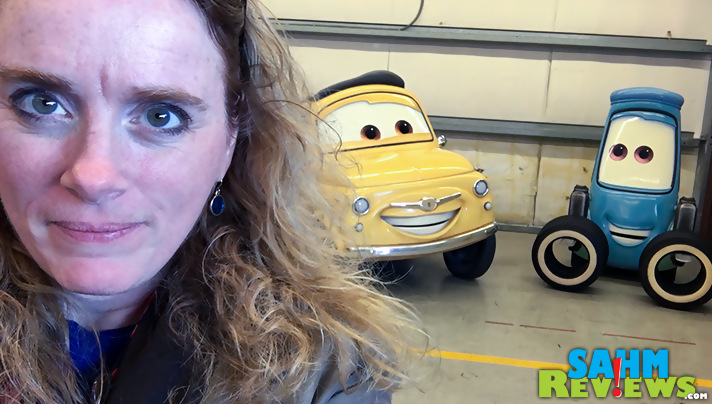 Of course, we got to hang out with Guido and Luigi, the cream of the crop of pit crews while we were there. We were also treated to a tour of a NAPA car transport and mobile garage. We discovered that the semi can haul two vehicles and is filled with enough parts to create another. One missing spare part can mean the end of the race. 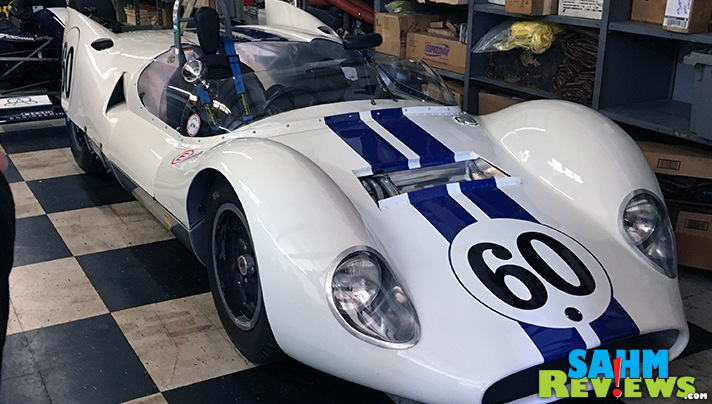 It was also pretty cool to stop into Robin Automotive at Sonoma Raceway and listen to Tony Nicholson share his thoughts on racing, the history of it, some scoop on historical racing vehicles and more. One of the race cars we were standing next to as we listened to him speak was #3 of 3 produced and worth approximately TWO MILLION dollars! According to Mr. Nicholson, restoring cars means using the same materials available at the time it was produced. He joked that he was thankful for the Midwest because (we) continue to make more aluminum, something they use a lot of. I secretly wondered if any of his supplies came from the aluminum plant here in the Quad Cities. His company continues to restore these vehicles to be able to race them. The one that amazed me most was the 1961 Cooper Monaco driven by Bruce McLaren approx 1962. He was a wealth of information, but one of my favorite quotes was “Racing is attitude followed by aptitude.” 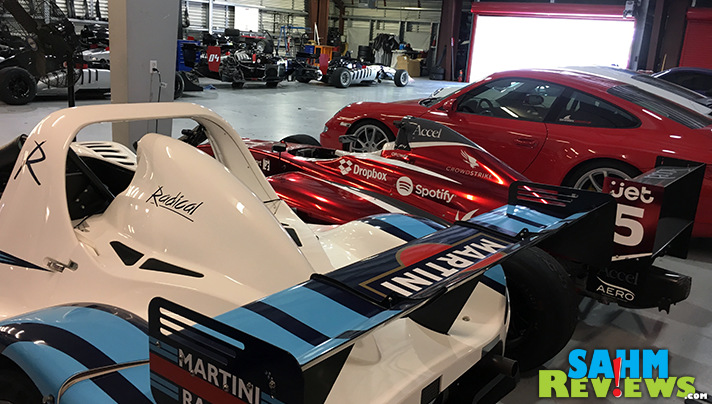 The theme of Cars 3 is new vs old so it seemed fitting to recognize both the vintage racers in the garage at Sonoma Raceway as well as some of the newer performance vehicles on property. There were plenty to be found as we went from one interview to the next. The parking lot was an ever-changing landscape of what we consistently heard zoom around the track during our meetings.

We would be listening to a presentation then all be distracted by the cars racing outside our window. I would say “Squirrel” but seeing as we were at a race track, that just seems wrong.

You don’t have to be a historian or a racing fan to appreciate when a company like Pixar makes a point of giving a nod to the individuals who helped shape the industry. During our interview with Creative Director Jay Ward and Ray Evernham, Former Crew Chief for Hendrick Motors, we learned about the great deal of effort and research the team put into crafting characters that showcased the features and personalities of four legends.

For those who aren’t familiar with the history of NASCAR, Jay Ward explains it has “some pretty nefarious roots.” Ray Evernham continues, “There were guys, Moonshiners, making illegal whiskey, and had to get their whiskey from city to city so they hired these guys called bootleggers. They had special cars that looked stock but they had good engines in them, they had strong suspension and they were great drivers and that’s how delivered their product.” The good drivers were the ones who didn’t get caught and it eventually became about bragging rights as to who was the best so they organized races in the fields for people to come watch. The races continued to evolve and ultimately the auto manufacturers decided to offer their new cars to replace the bootleggers beat-up cars. The motto became “Win on Sunday, Sell on Monday.”

Above is the concept art for these legends and below is an image from Cars 3 in a scene that takes place during Lightning McQueen’s visit to Smokey’s Automotive Service station.

Wendell Scott was the first African American making major accomplishments in NASCAR during a pre-Civil Rights era. While other drivers would pull into the pits and have a crew handle all their upkeep needs, Wendell Scott did not. He would pull in, exit the vehicle, jack it up and change the tires. Despite these and other challenges, he still managed to come out ahead, including being the first African-American to win in the Grand National Series. He actually won a race in Florida as NASCAR’s highest race level, but was not awarded the tile nor the trophy until the following days because they didn’t want a black man holding the trophy. Ultimately he was given the recognition he deserved and inducted into the NASCAR Hall of Fame. Evernham says “He accomplished more with less than anyone in NASCAR history.” When you see Pixar’s Cars 3 movie, pay close attention to his “Mechanic: Me” license plate.

Junior Johnson’s father was a moonshiner so Junior became a bootlegger. As Ray Evernham puts it, “He was arrested, went to prison, came back on the straight and narrow and became a NASCAR racer. He was such a GREAT driver that he won 55 or 60 NASCAR races, then became a great mechanic and owner, his drivers won championships.” Junior brought huge sponsorships into NASCAR including the first title sponsor they ever had – the Winston Cup series. Because he roots in moonshine, his movie car is modeled after a moonshine vehicle and is voice by Junior Johnson himself!

According to Evernham, “(Smokey Yunick) is special because this is one of my heroes as a crew chief and mechanic. This guy is, to me, is the idol of all of us. He was a common sense genius, WWII hero, inventor, GREAT mechanic…” Many of the advancements such as power steering, are attributed to Smokey Yunick. His cars always had some kind of little secret. He read the rule books inside and out. Evernham said, “Smokey once told me personally, ‘If it DOES NOT say that you can’t do it, that means you can.” He was known for always wearing a hat. His Cars 3 Hudson truck sports a visor as a tribute to that characteristic.

Louise Smith was one of the first lady drivers ever to race in NASCAR. “She wouldn’t back down from a fight… won 38 races and was the first woman inducted into the Motorsports Hall of Fame.” For the longest time, she wasn’t even allowed in the pits so she would have to park her car outside of the pit area. She drove a Nash which is the inspiration for her Cars 3 tribute.

In addition, there are many shout-outs and homages to NASCAR across the Cars 3 including reference to Jocko Flocko, the only monkey to win a NASCAR race, the 1970 Superking for “The King”, Richard Petty, Darrel Walltrip as “Darrel Cartrip” and Mario Andretti requested a Car 3 character modeled for his Daytona win.

Cars 3 is poised to be even better than its predecessors so mark your calendars!

What part of this Cars 3 Sonoma Raceway experience would you be most excited about?