How did you (or would you now) finish the sentence? How would your kids? There are so many amazing opportunities available that most adults wouldn’t have even dreamed were possible and it’s the result of innovation. A “super computer” when I was a kid would fill a room and the processing speed and abilities weren’t anywhere near the capacity and capabilities of the “super computer” we affectionately refer to as a smart phone.

At a fraction of the weight.

There are forms of innovation around every corner. Some, like smart phones, are blatantly clear. Others, like advancements in the graphics on your phone aren’t quite as obvious. As we learned during our Cars 3 interviews at Sonoma Raceway, it’s the same thing with the upcoming release of this latest Pixar animated film. I’ll be sharing specific details from the interview in coming weeks, but what it boils down to is the movie is more realistic than the last. Just like Monsters, Inc. revolutionized the movement of fur and Moana captured realism in wet hair, Cars 3 has figured out mud. Check out the trailer through a different eye and look at the details.

Think back to the original Cars or even classics like Bambi and notice what has happened. Serious improvements in the film making process. What if I said that Pixar has developed digital classes so you, too, can learn the magic behind the animation process? They did. And the best part… these classes are FREE! 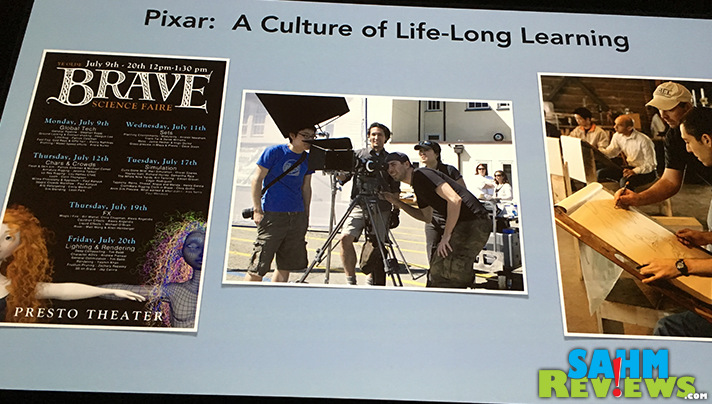 Education has always been important to Pixar. Pixar University, their internal education program, offers team members the opportunity to learn a diverse range of subjects including art, acting, writing, film making, leadership skills, technical skills and much more. As Eylse Klaidman, Director, Exhibitions and Educational Partnerships explained, “This idea of life-long learning, this idea of continuing always to think about new ways to stretch our brains.” They even offer a science fair at the end of a production to discuss the myriad of technical approaches and discoveries that have happened during that production. “At any point in the day, 1/4 to 1/2 of the studio are taking part in some type of learning.” 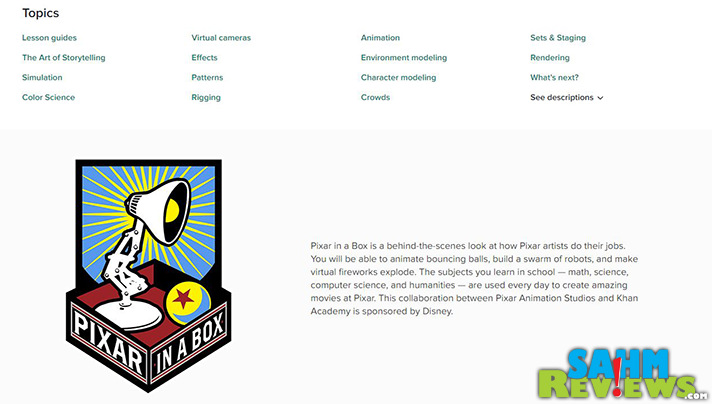 I know, I know. I said it was accessible to you. Well, kids often ask “why do I have to learn that?” Well, 10-15 years ago, Tony DeRose, Research Group Lead with Pixar giving “Math in the Movies” presentations to “pull the covers back and tell the story about the degree to which math was used in films.” Afterwards, parents and teachers asked how they could get their hands on the presentation. In the same way that Pixar partnered with a reputable art museum to create a hands-on learning exhibit, they realized the need to find someone in the education space to assist with create a program to reach the masses. That’s where Khan Academy came into the picture.

And that was the birth of Pixar in a Box.

Funded by Disney Corporate Citizenship, Pixar in a Box is an online learning system where anyone can log on and walk through tutorials explaining a variety of topics relating to the animation process. It’s a 3-year program that has included math, science and art with intent to show how the concepts learned in the classroom are used to create films at Pixar. 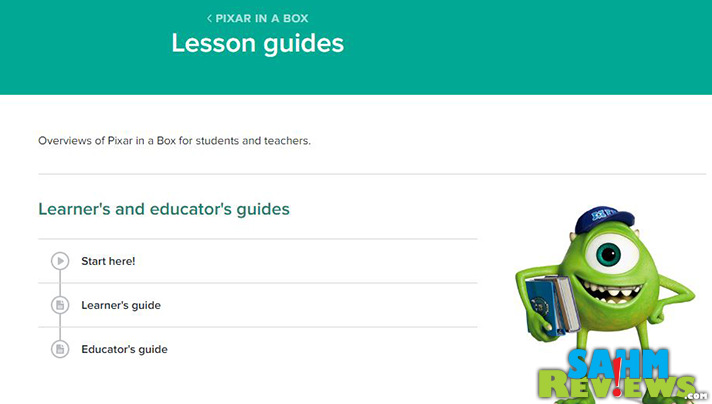 Some topics include The Art of Storytelling, Rigging, Character Modeling and Rendering. They’re all based around problems they have run into in the studio. As an example, in Environmental Modeling, students learn that the forest in Brave is created using the mathematical principals known as parabolic arcs. The Patterns lesson explains how the skin on the dinosaurs is made. Each lesson is hosted by actual Pixar employees who work with these concepts on a daily basis. 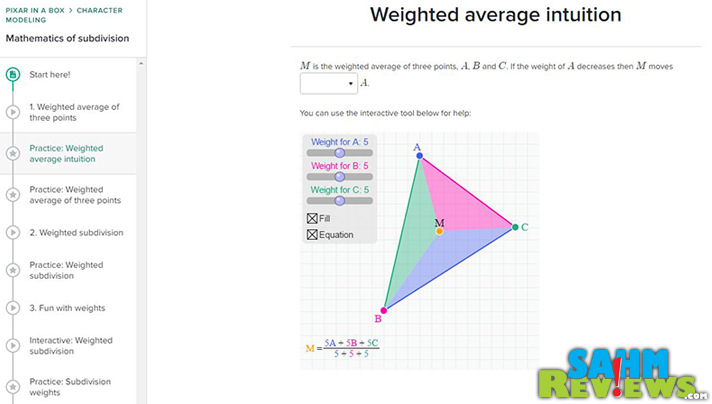 Some of the lessons are tutorial videos while others are interactive. Through use of video tutorials and written content, students learn the various concepts then utilize applets to put those ideas into practice. We all may (or may not) remember weighted averages, but wouldn’t it have been more memorable if we learned it like this? In addition, there are also some that are truly hands-on which means not using the computer. Not only is this fantastic for home school families, but also to give kids something to do during the summer! It’s also a perfect way to show kids “this is why” they need to learn math… and science… and art and…

Spend some time learning through Pixar in a Box then mark your calendars for June 16, 2017 to see these ideas put to full use with the release of Cars 3! Follow along with Pixar in a Box on Twitter and Facebook to learn about their multiple educational initiatives.

What type of topic would you be interested in learning through Pixar in a Box?

9 thoughts on “Learn the Process Behind Cars 3”