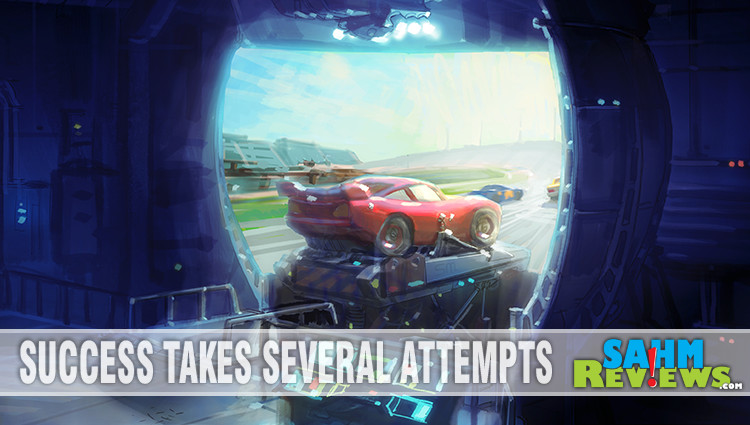 There’s a lot that goes into making a major motion picture. Until our trip to Sonoma Raceway for the Cars 3 Event, I didn’t realize just how many steps – and people – are involved in the process. It all begins with an idea, a story concept, that has to pass muster. Is it compelling and interesting? Does it drive emotion? If so, the writers are given a green light to begin researching and writing the story. That’s only the beginning though. Everything beyond that is more technical. With an animated motion picture, it isn’t as simple as picking up a camera and having the director proclaim “Quiet on the set” and call out “Action!” There are steps and steps and… check out the trailer then allow me walk you through the process of what it took from the original story idea until it’s ready for the big screen release of Cars 3 on June 16th.

If you had a chance to check out various animation lessons available through Pixar in a Box, you understand that there is a lot that goes into Pixar’s production pipeline. From the story to the final rendering, the process isn’t as easy as one and done. It takes multiple trips through the pipeline as it circles back when corrections need to be made. Surprisingly, despite being a pipeline, these things all take place simultaneously once the project is in motion. While it is referred to as a pipeline, in reality, if one thing changes then everything else does too – all constant until the final release of the film. 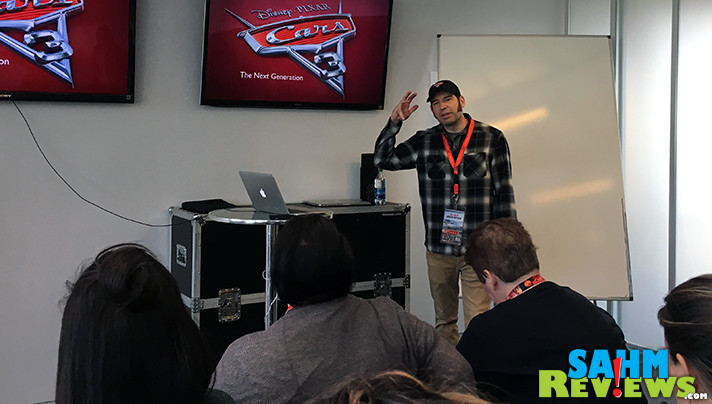 During our exclusive interviews, we heard from Jude Brownbill (Directing Animator), Jay Shuster (Production Designer) and Michael Comet (Characters Supervisor) about the process of bringing the next generation of characters to life. It isn’t as simple as sketching out a car. The voice, the personality, the image it conveys simply from looking at it and more all play into the process.

When we were first introduced to Lightning McQueen back in 2006, he was at the top of his game and all the other cars were designed to look outdated. In Cars 3, the opposite is true and the next generation of racers needed to be sleeker, faster, better than their predecessors. “We start with a blank sheet of paper. The goal is to use shape, paint and graphic to create a character that contradicts McQueen in every possible way… In the art department, we are drawing as many ideas and getting them up on the wall every week so that Brian Fee (Director) can come in and react and give us further direction.” They did 100s of sketches. While McQueen was round and flowing, Storm needed to be angular and sharp. The images were shown to racing industry professionals to see if their new designs made sense. Jay Shuster explained the process of creating an animated car is similar to what the auto industry does. So they consulted J Maze from Ford and molded clay sculptures. (During our tour of the Pixar campus and one of the Cars 3 receptions, I had a chance to see the sculptures in person. Unfortunately, no pictures were allowed!) After they sculpted the characters, the team created velum overlays with eyes and other features. Michael Comet explained how they digitally painted and did rigging (moved it around like a puppet). They would move the eyes and mouth and simulate expressions to ensure it all worked together. As Jay Shuster said, “It’s a constant process of tearing down and building up to perfect these designs.” 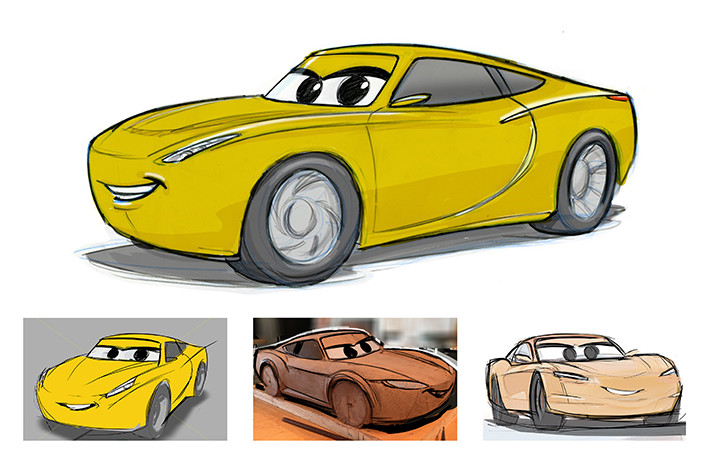 Jude Brownbill went on to discuss the need to pull back the design from being cartoony and even going so far as to change acting choices to be more believable. As the design team worked to perfect the characteristics of each car, including factoring the personalities and charisma of each of the respective voice actors, the other parts of the production pipeline continued to work on their own processes. 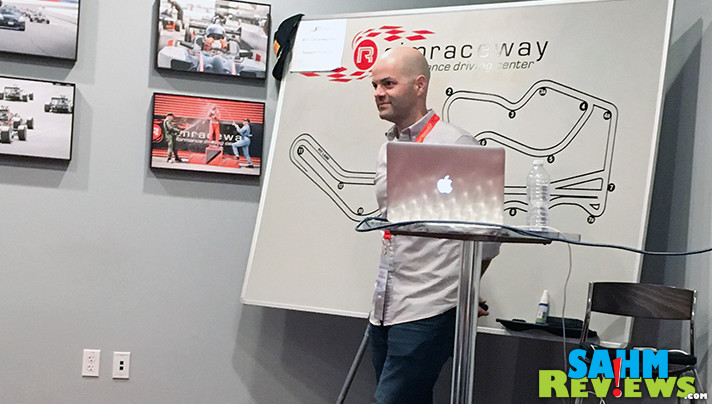 The story is always king, but many people don’t think about what is behind it. Pixar Supervising Animator, Bobby Podesta shared details behind the production process including how they make every Pixar production emotionally relatable. As an example, one of the demolition derby scenes in the movie, referred to as the Crazy 8 represents a crossroad in life for McQueen. He is out of his element and afraid for his career. They strive to have photo realism. The art drives technical and technical influences art. 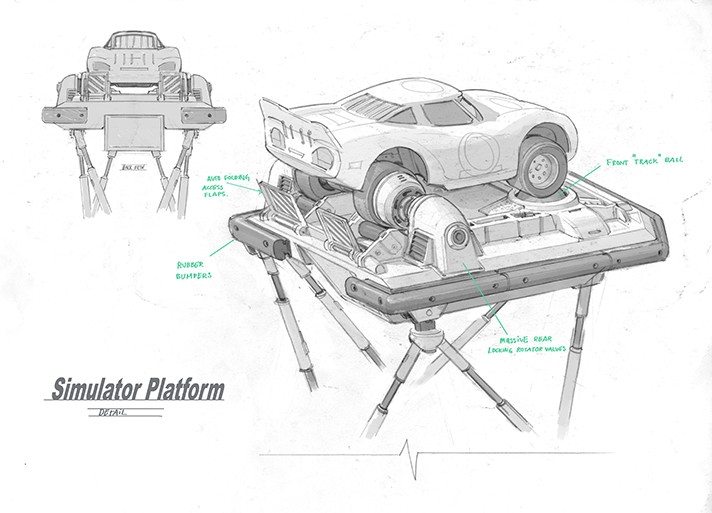 John Reisch, Effects Supervisor discussed how his team is responsible “for all the natural phenomenons we see in our world… Water, fire, smoke, sand, dust and debris. Anything that our characters interact with in this rich, complex world we’ve constructed for Cars 3.” The Crazy 8 scene posed one of the biggest challenges in the film. Lots and lots of mud that isn’t liquid and isn’t solid. It took a great deal of work to replicate in the computer to get the photo realism they were seeking. They use physical simulation software to help them achieve their final effects. About half a dozen departments needed to work together to communicate the emotion and achieve the perfect reaction in what may only be a split second of the film. I cannot even scratch the surface of what all was covered in these interviews!

I was most surprised to hear that Pixar continues to make changes until the last possible minute. As I have continued to see trailers rolling out, I’ve had a greater appreciation for what goes into the final result. And you know what? June 16th can’t get here soon enough so we can go see the whole movie!

Which character are you most excited to see in Cars 3?

6 comments on «Behind the Scenes: Pixar Cars 3 Production Pipeline»