Okay, so I think we’ve made it plenty clear that we’ve been on a run of dragon-themed games lately. But before that, you may recall our overview of the Jaws board game where we talked about introducing our daughters to classic movies. You know, like Jaws. Actually, we’ve been all over the place with the idea including the National Lampoon Vacation franchise, Beverly Hills Cop and so many more. We’ve always made a point of watching TV shows together and hitting the local theater for the latest movie releases at least once or twice a month. But this pandemic has given us the opportunity to relive some of the favorites that Scott and I grew up with. It wasn’t until The Upper Deck Company sent us a copy of Aliens: Bug Hunt did we realize we needed to introduce the girls to the Aliens series of movies! Alas, we checked for places to stream movies and it appears that these are only available on HBO. So we decided to give them a taste of the game first and movie later.

First and foremost, I want to say that Aliens: Bug Hunt is a cooperative game for up to four people, including a solo mode. You are a team of Marines attempting to reconnect with after communication with a colony has been lost. The goal to work together to secure the colony, complete missions then escape before the complex is overrun by Xenomorphs. 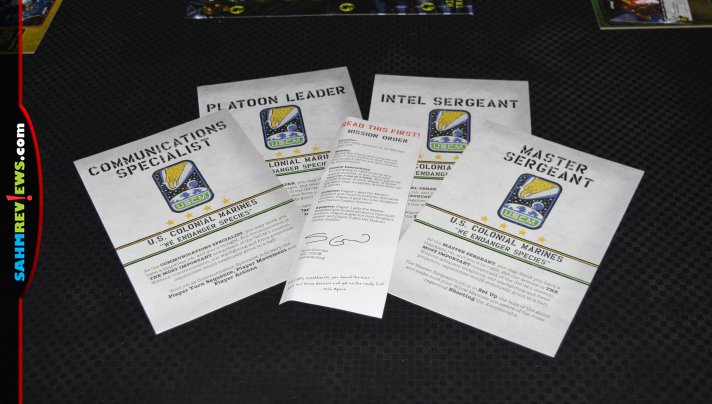 That cooperative concept begins from the time you sit down to learn the rules and not just when you gather to play. In other words, the instructions of how to play have been divided into four dossiers, one for each character. The intention is for everyone to learn the game together and all players have a part in that process. 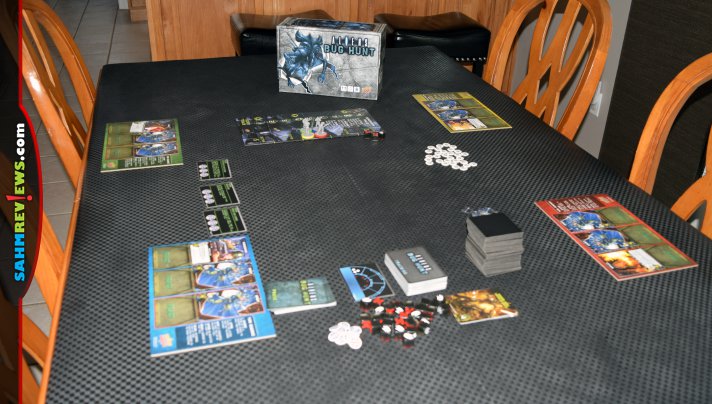 To set up the game, each player takes a player card and two grunt character cards. One main character card is randomly distributed to each player, assuring that each game is unique. Shuffle the mission cards and select draw three. Return the unused character and mission cards to the box. The large tile that contains the Hive Tracker is placed near the center of the table with the sector side facing an open area for tile placement. Characters are placed in sector 3 where they’ll enter the colony’s complex. Build a phase deck utilizing the player phase cards, the Lt. card and one alien per player. The additional alien phase cards are set aside and will be incorporated later. Create a general supply of all dice and tokens with all the wound tokens skull-side up. Shuffle the tracking deck and set it alongside the play area. 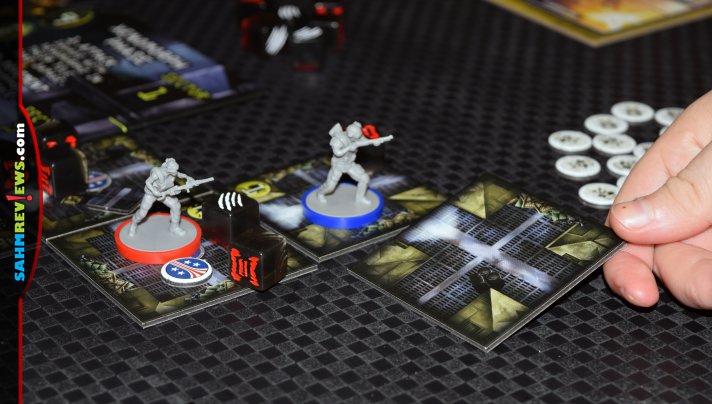 Unlike many games like Pandemic, turns in Aliens: Bug Hunt aren’t as predictable. The Phase cards determine who has the next set of actions, a player or even the aliens! Each turn consists of two steps: Movement and action. You can move up to three movement points on each turn then you may either shoot, capture an objective, breach a barrier or reload. If you move into a space without a tile, draw a new one, align it according to where you entered then end your movement. Populate the tile with Xenomorphs or mission tokens depending on the icons depicted on it. 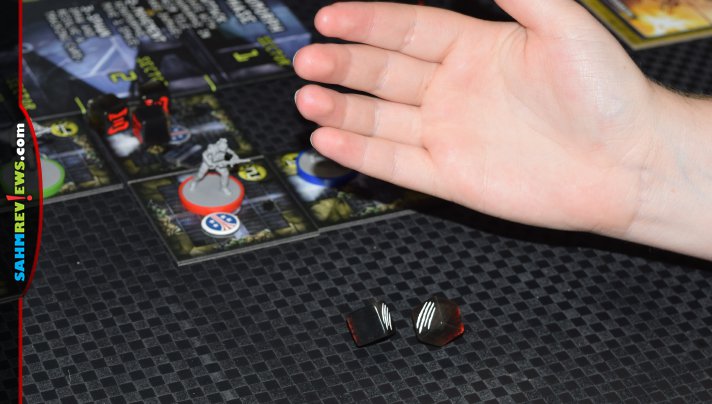 The interesting thing about Aliens: Bug Hunt is that it isn’t like a lot of complex dungeon crawler games. Xenomorphs are represented by the dice. When you attack, you have one of three possible results. A blank side means you’ve killed that alien. If you shoot and roll either a white or red result, the Xenomorph survives! The difference is that each red result means the alien is attacking back and your squad takes a wound. A white result indicates a miss, but no retaliatory wounds for the team. 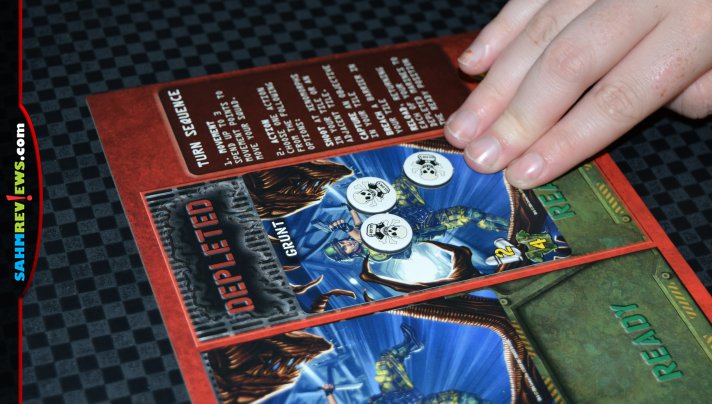 So that’s the other thing that’s cool. You cannot predict what type of wound you’ll get if you are attacked. Each time you receive a wound, you place it on your character card without looking at the back. Once you’ve received the equivalent to that’s character’s armor level, whenever you receive another wound, you flip one of the existing tokens over to reveal what is on the back. A blank back means your character lives, but a KIA indicates the soldier was killed in action and is removed from the game. 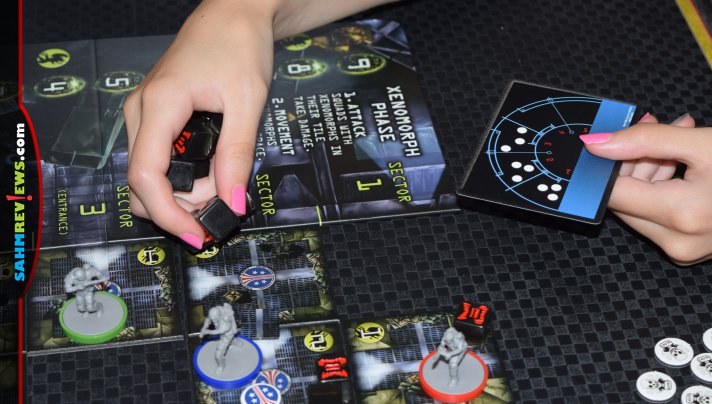 Should the phase deck reveal an alien card, then the Xenomorphs get to attack, move and spawn. They’ll attack all squads and the Point Man will take one wound for each alien in their tile. Xenomorphs that are not in the same space as one of the teams will move one space closer. If they move onto the APC board, they escape from the complex and the Hive Counter moves one space on the track. 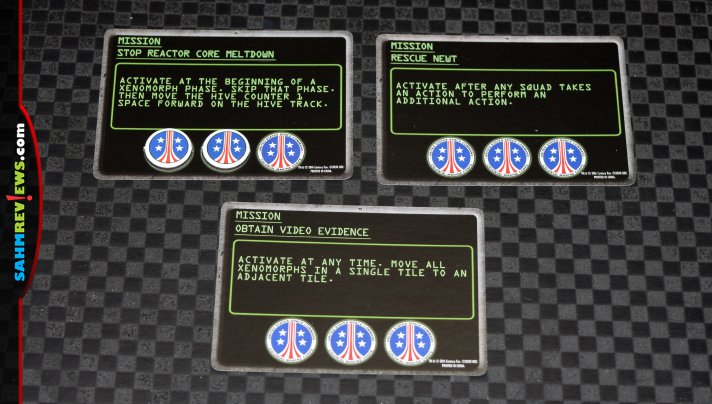 A game of Aliens: Bug Hunt is over when one of a few things happens. You can claim victory if you’ve placed three Objective Tokens on each of the three Mission cards AND been able to safely evacuate the entire team from the complex via Sector 3. However, if one player’s 3-person squadron has been eliminated, the entire group loses. Likewise, you must abort the mission if the complex has become so overrun with Xenomorphs that you no longer have dice available to place during a spawn. If your Tracking Deck runs out of cards or an additional Xenomorph Phasing card needs to be added but cannot, then you’ve also immediately lost. 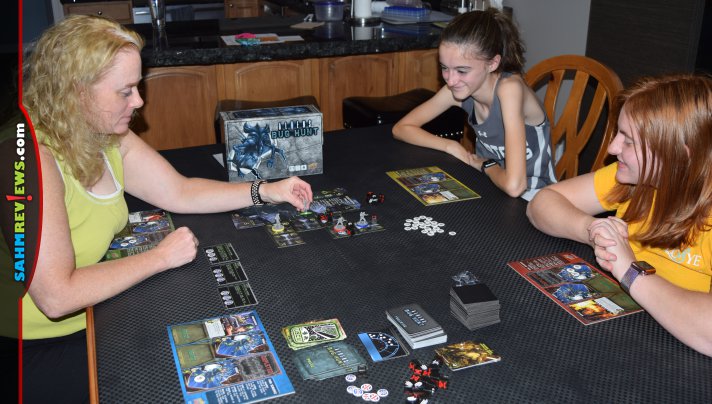 Between the randomized characters, order of play, spawns and luck of the roll, you’re sure to have a different experience each time you play Aliens: Bug Hunt. But first you need to get your hands on a copy of it and that won’t happen until it launches next week! Get an exclusive promo if you order through Upper Deck or add it to your next Amazon order if you prefer to sneak it in with your other “grocery” purchases. Hunt out the details of other new releases from Upper Deck Entertainment by visiting them on Facebook and Twitter!

Which is your favorite movie from the Aliens franchise?