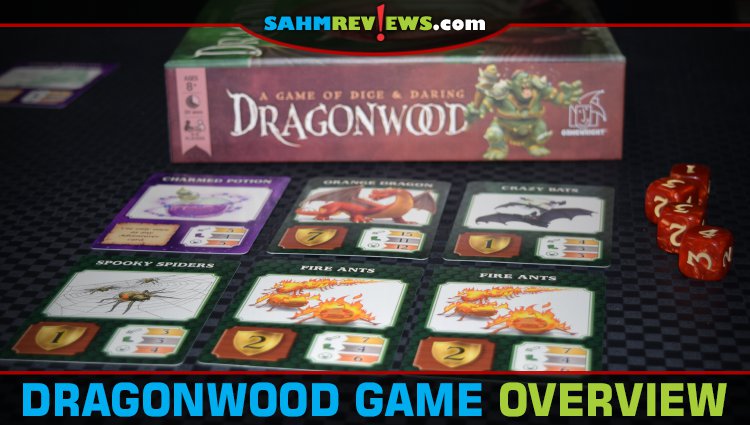 Continuing with this week’s theme of games about dragons, I had intended on telling you about Gamewright‘s new Dragonrealm game. It’s the second in a series featuring many of the same characters. The first was Dragonwood, a 2015 Mensa Select winner and one of the first games to become a staple whenever we’re shopping for gifts. In order to talk about Dragonrealm, it only makes sense to feature Dragonwood first!

While I have described Dragonwood as a card game in the title, in fact it is both a card and dice game. You and up to three other players are adventurers on a journey through the enchanted forest of Dragonwood. Along the way you will need to defeat fierce creatures and capture magical items to make your trek easier. 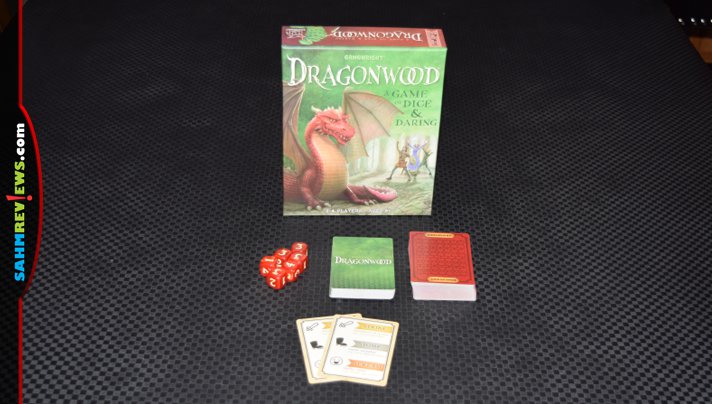 Inside the box are two decks of cards. One is the Dragonwood deck and features the creatures, enhancements (items) and events. The two dragon cards are removed temporarily and an additional number of cards, depending upon the number of players, are also permanently removed. The rest of the entire deck is shuffled together and then the two dragon cards are shuffled into the bottom half of the deck. Five of the cards are revealed and laid in a row next to the rest of the deck in the center of the play area. 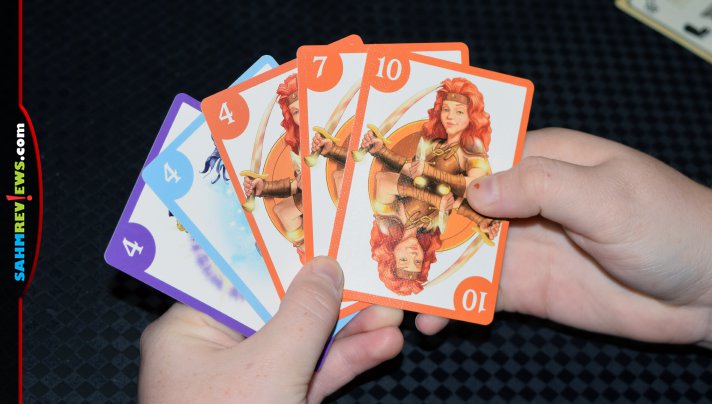 The other deck of cards, called the Adventurer deck, is shuffled and five cards are dealt to each player. These are hidden from other players while the rest of the deck is put near the Dragonwood deck along with the six custom dice. Turn summary cards are also available and should be placed within reach of all players. The last player to have gone into the woods begins the game as first player! 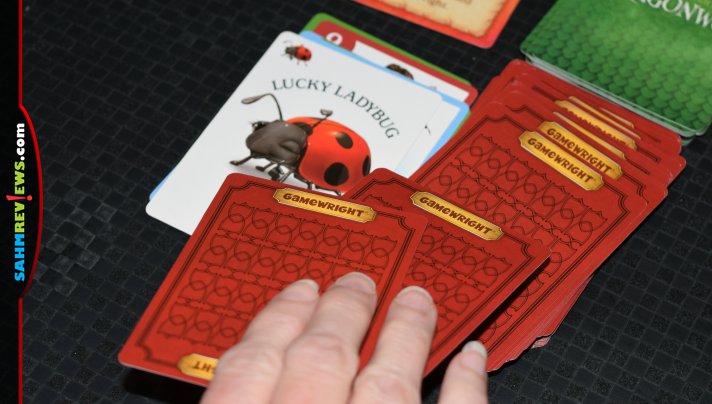 On a turn you choose from one of two actions. You may draw a card from the Adventurer deck and add it to your hand. If you draw a ladybug, discard it and draw two more into your hand. The Adventurer cards are made up of five suits and are numbered from one through twelve. Making sets, straights and suited sets will come into play in a moment. You have a hand limit of nine cards, so if you ever go over, you must discard down to nine immediately. 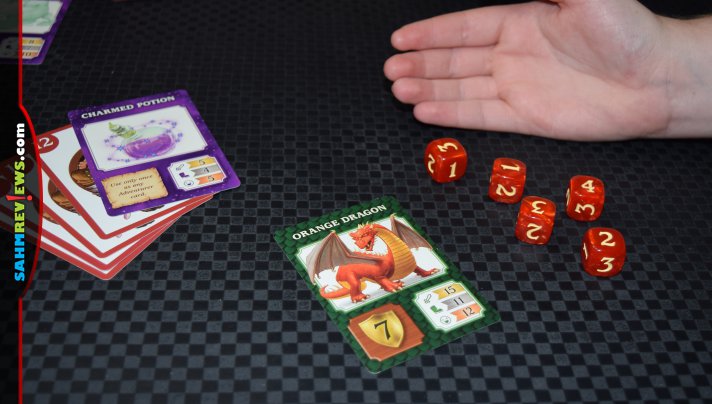 The other action you might choose is to capture a card. On each card there are three numbers printed in the lower right alongside its corresponding challenge. The top line, fighting the creature, demands you play a straight of cards in order to earn dice. A straight of two earns you two dice, a straight of three earns three, and so on. Using the dice earned, you will roll them and try to meet or exceed the number printed on the card. If you do, you earn the card and the points listed in the lower left (creature) or the special ability in the same area (enhancements). 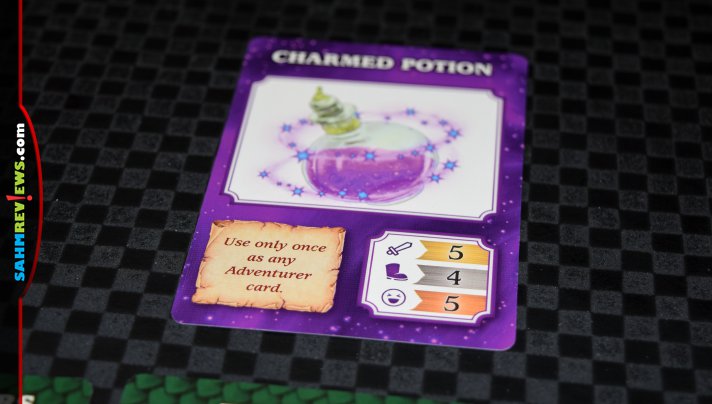 The second and third lines are alternate ways to capture the card. The boot symbol means you are stomping your feet and must play cards of the same number. Play a pair and earn two dice. Four of a kind earns four dice. If you try to scream your way to victory (the last line), play cards of the same color suit to earn dice in the same manner. In all cases, it doesn’t matter the numbers of the cards you play, it’s all about how many cards you lay down. That’s how many dice you get to roll to beat the number. If you don’t roll high enough, take the cards played back into your hand and discard one of your choice to the discard pile. 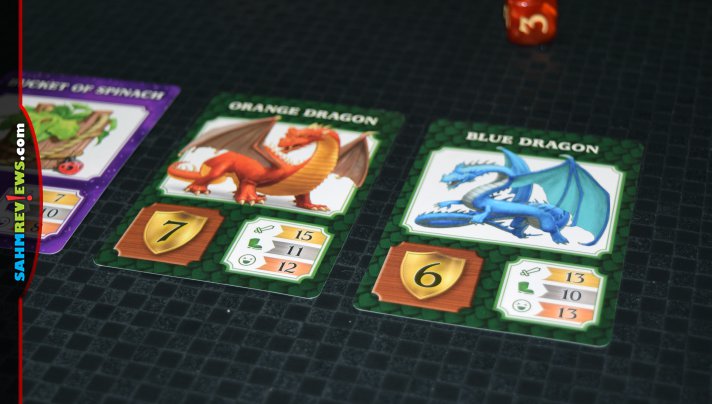 Once you capture a card, replace it with another from the Dragonwood deck. If you draw an Event card, resolve its effects immediately, discard it and draw a new one in its place. A game of Dragonwood ends after the Adventurer deck has been used up twice (shuffle the discard pile into a new deck after it is depleted the first time) or once both dragons from the Dragonwood deck have been captured. All players will total up the victory points on their captured cards. Whomever captured the most creatures earns a bonus three points (if tied, two points each). The adventurer with the highest overall total wins Dragonwood! 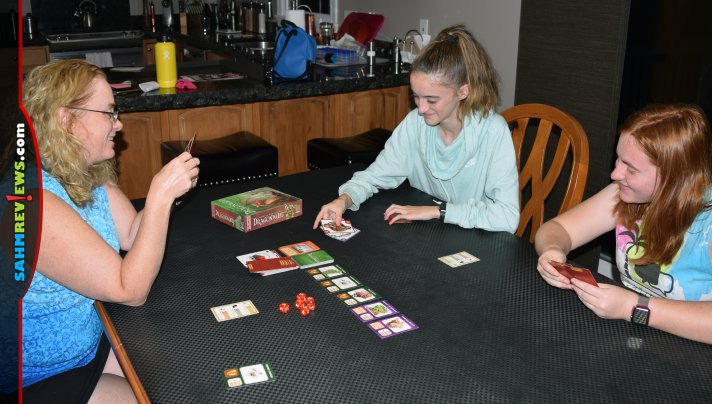 A number of suggested variants are also listed in the rulebook to allow for a shorter, longer, simpler or more advanced games. Pick up a copy of Dragonwood at your favorite local game store, direct from Gamewright or on Amazon, where you can also get it in a discounted bundle with Sleeping Queens. Follow Gamewright on Facebook and Twitter to learn more about their other family-friendly games, including Monday’s feature, Dragonrealm!

Would you call this a card game or a dice game?