Yesterday Scott pointed out the variety of dragon-themed games we’ve been playing lately and even touched on some we had played a while back. Some (like Dragon Strike), are actually focused around a dragon. Others (like Dragon Market) simply have it in the name. A couple years ago, we played In The Year of the Dragon from Alea, an imprint of Ravensburger, and all I could think of was the first time I really felt a connection to the ancient Chinese Zodiac system. We were living in California and when Madison was born, one of Scott’s business partners gifted her a SWAROVSKI Chinese Zodiac Horse. When we played the game, it brought back a rush of emotions. But this isn’t a time to get mushy… it’s time to talk about another board game from one of our favorite designers, Stefan Feld!

In the Year of the Dragon has a lot of components and looks very complex, but it’s actually not too bad if you break it down. Let’s start with the setup! The board goes in the center of the table then set up the rest of the pieces in their designated spots on the board. The eight-sided scoring markers go on the outer track and the round markers on the inner track of the board. The action cards are shuffled and set in the area on the middle of the board. Sort the Person Tiles by color followed by level/age then assign them to the board as noted in the instructions. Next, add the Event Tiles to the board with the two peace tiles going first and the remaining spots filled randomly, making sure not to have two identical types next to each other. Players take their color-coded dragon along with the 11 person cards (to form their hand), four palace floors (to build two 2-story palaces) and six yuan. Create a general supply with the remaining coins, palace floors, and tiles (rice, fireworks and privilege). Before the game begins, each player takes turns selecting two Person Tiles.

You’ll play 12 rounds of In the Year of the Dragon, each representing another month. There are four phases per round: Action, Person, Event and Scoring. Throughout the game, you’ll be maintaining your palaces. Each may only contain one person per floor and none may have more than three floors. Each time you recruit a new person, you’ll move your person marker that many spaces on the track. That’s the person track, NOT the scoring track!

During the Action phase, you’ll select cards that determine which actions you’ll be able to take on your turn. Start by shuffling the seven action cards and arrange them in groups face down based on the number of players. Flip them face up the the player furthest ahead on the person track places their dragon marker on one of the groups. The gameplay proceeds in order of positioning on this track and will change quite often throughout the game. Other players do the same, paying coins if a prior player has already selected the same group. Optional actions include collecting coins for taxes, building a palace floor, harvesting rice, creating a fireworks display, preparing military, doing research or gaining privilege.

The second phase involves person cards. All players, in person track order, plays one person card from their hand, takes the matching person tile from the board and places it under one of their palaces. Players then adjust their tokens on the person track accordingly. 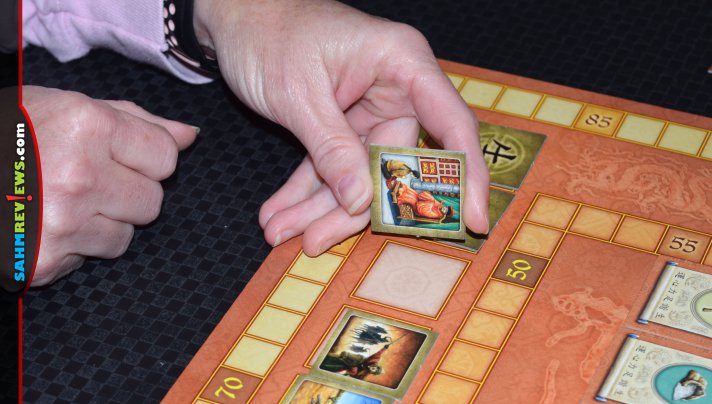 After the first two rounds of Peace, things start to get tumultuous and an event takes place. Players lose rice during a drought, palace floors when there is decay, people as a result of a contagion and money is demanded for an imperial tribute. When a Mongol invasion occurs, players advance on the scoring track based on the number of helmets they’ve acquired. During a Dragon Festival, the players with the two topmost fireworks earn victory points. 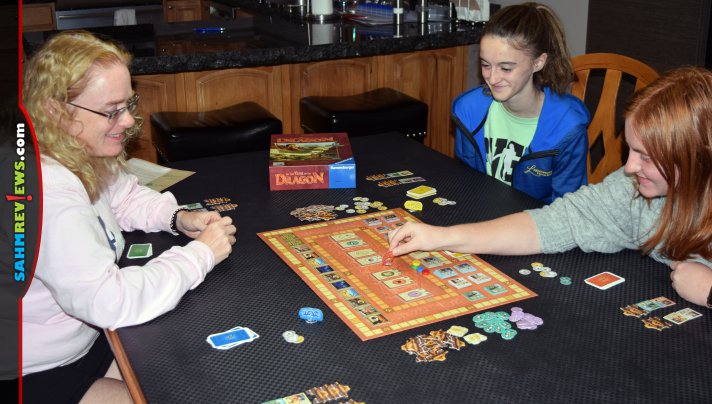 After the the first three phases, it’s time to score. Players earn victory points for privileges, fans and palaces. When scoring is completed, a new round begins. After the 12th round, there’s a final scoring phase then a winner is determined.

One of the nice things about In the Year of the Dragon 10th Anniversary Edition is that it has two expansions included in the box, giving each game some variety. Ask about the game at your local game store or order a copy from Amazon. We’ll be telling you about more great products and games from Ravensburger and Alea including one based on Back to the Future! Stay tuned for that overview and in the meantime, check out Ravensburger on Facebook and Twitter to see more buzz and news!

What animal of the Chinese zodiac year represents the year you were born?