Home / Recreation / Games / Back to the Future: Dice Through Time Dice Game Overview 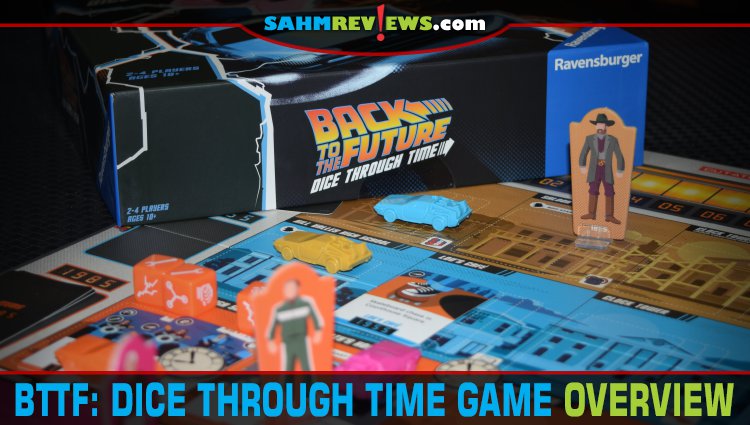 Back to the Future: Dice Through Time Dice Game Overview

I’m starting to realize that it doesn’t take much for me to realize I’m old. It sometimes happens when realizing I don’t understand what my kids are saying or have to look up some acronym they texted me. Those things don’t happen nearly as often as seeing my past regurgitated in new form. You know, like fashion trends or a reboot of a TV show like Saved By The Bell. But the biggest trigger is when something I enjoyed as a teen is suddenly celebrating a major milestone. We Are The World, The Golden Girls and Back to the Future all marked their 35th anniversaries in 2020 and Jaws hit 45. Perhaps that was the inspiration behind the Jaws board game and Back to the Future: Dice Through Time from Ravensburger. 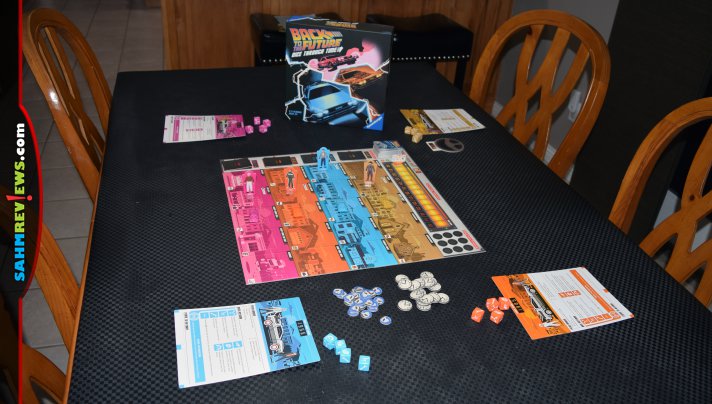 Sometimes games are designed then the theme is added to it afterwards. It’s clear that the theme of Back to the Future: Dice Through Time was not an afterthought as all the activities and events that take place clearly align themselves with the movies. When you’re ready to play, place the board in the center of the table then place Biff standees on their designated locations. Everyone selects a player color then collects the associated DeLorean pawn, four dice and player mat. Sort item cards by year, shuffle independently then place a number (based on the player count and difficulty level) onto their designated spots. Place the shuffled deck of event cards on the board, leaving room for a discard pile next to it. Create a general supply of paradox tokens as well as face-down Einstein tokens. Set the player DeLorean pawns on the Clock Tower matching their year and OUTATIME marker on the timer track then you’re ready to go… Back to the Future!

Back to the Future: Dice Through Time is a cooperative dice game where you’ll spend several rounds attempting to fix everything that Biff managed to mess up. You’ll work together to find items and return them to their proper location and time before time runs out and you’re all erased from history. Each round will begin with the first player drawing event cards according to the number of players, reshuffling the discard pile in the event you run out. Reveal the events and place them on their corresponding space, making sure you pay attention to the location as well as the year. If the event card displays a Biff icon, you’ll relocate him to that location. After events have been resolved or placed, everyone rolls their dice. 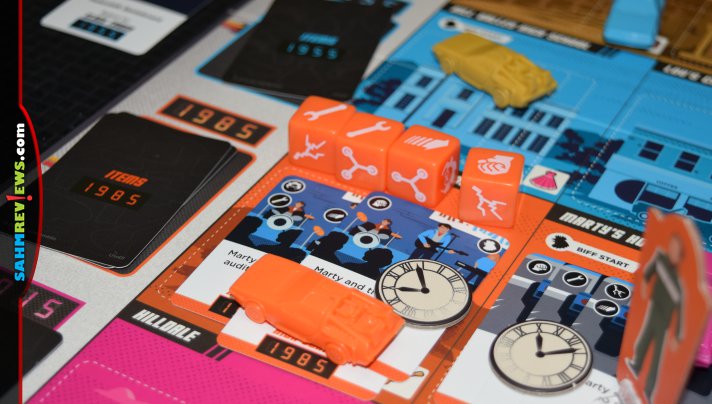 While everyone is working together (and rolled simultaneously), the actions are done one at a time beginning with the first player. Each die result has a specific purpose. A Flux Capacitor allows you to shift to another year in the same location whereas an arrow moves you along the path (forward or backward) on the current year. Be careful about this because landing on a space with another DeLorean results in an OUTATIME penalty. If you roll a fist and happen to share a location with Biff, you can smack him into another location (thankfully, there are no manure piles in the game). A lightning bolt can be spent to reroll as many of your unspent dice as you choose whereas a wrench is basically a wild. Doc Brown is responsible for removing paradox tokens from the board so be sure to put him to work when possible! 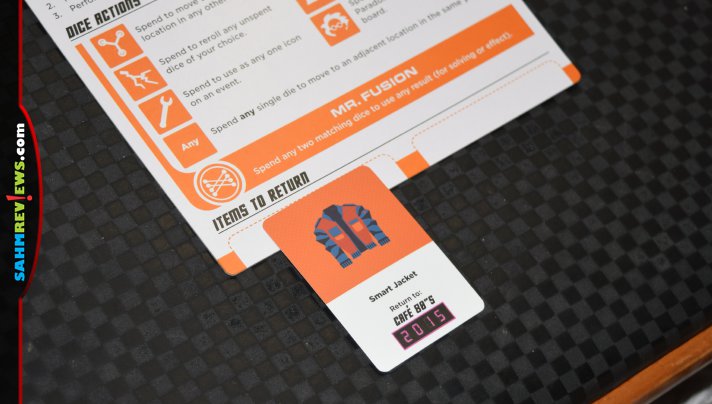 In order to complete an event, you’ll need to spend dice that match all the icons on ALL the cards in your current location. In other words, you need to make sure you’ve moved to the proper location first and you cannot partially finish an event. Fixing the space-time continuum is an all-or-nothing process. 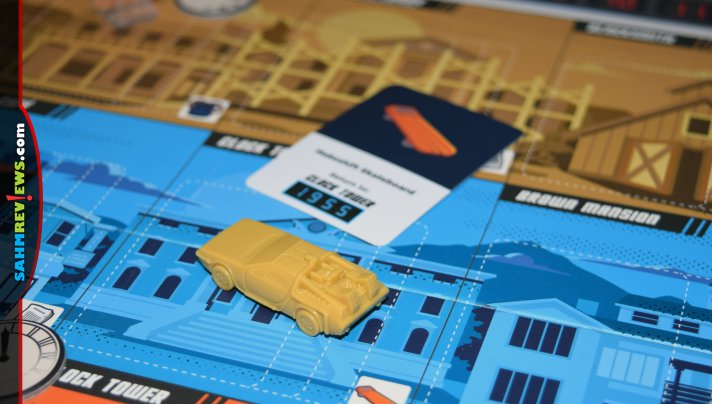 Upon clearing a location, you’ll receive one item card for that year and you’ll store it in on your player mat until you’re able to return it to its proper location on the board. In order to do that, you need to make sure Biff isn’t there, because you can’t fix anything when he’s around. Whenever you successfully return an item, move the OUTATIME marker one space to the left to indicate that you’ve repaired a piece of the space-time continuum then draw an Einstein token, reveal and place it on the board. Any player may use these to finish an event. In addition, players may leave behind unspent dice for another player to utilize! 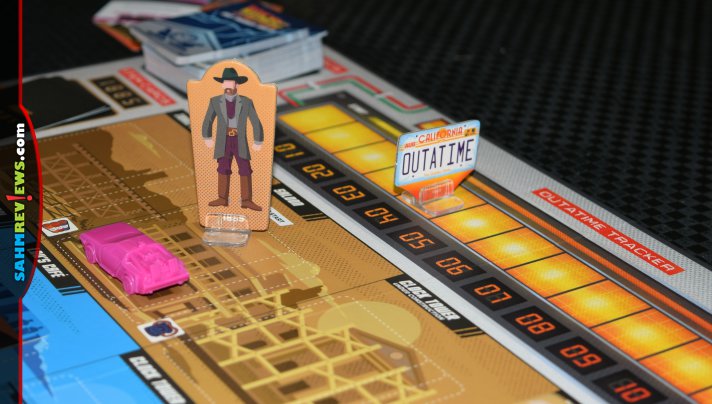 After everyone has taken their turn, finish the round by advancing the OUTATIME marker based on the number of damaged locations in the most out-of-sync year. Advance an additional space for each Paradox token on that year. Add Paradox tokens to any event in that year that doesn’t already contain one then pass the First Player marker to the left and begin a new round. You’ll continue until either 1) your run outatime (you lose) or 2) you’ve returned the final misplaced item to it’s proper location and year (you win).

It’s been cool to hear all the excitement surrounding Back to the Future: Dice Through Time, not just because we know the designers but also because it helps me realize that other people are old too. Find copies of Back to the Future: Dice Through Time on Amazon, Target or locally where you purchase games! We’re probably OUTATIME to get it by Christmas, but you can still pick up a copy to play with friends and family before kids return to school in January! Visit Ravensburger on Twitter and Facebook for other ideas of how you can get lost in time!

What reboot or event anniversary made you feel old?

21 comments on «Back to the Future: Dice Through Time Dice Game Overview»