As a family who normally hits the movie theater once a month or more, losing that little piece of luxury was quite a blow. We were excited that local drive-in theaters began offering classic movies while traditional theaters cordoned off auditoriums for private parties. In addition to hits like Back to the Future, we were pleased to see a mix of films that earned their place in pop culture. Among them, Harry Potter, Raiders of the Lost Ark, Jurassic Park and Jumanji. The most recent addition to the list is 42, added because this pandemic continues to serve up a roller coaster of emotions. Just a few short weeks ago, the world received news of the passing of Black Panther actor, Chadwick Boseman. Everyone is mourning the loss of someone who was a role model for so many people of all ages and backgrounds.

We continue to find comfort and solace in board and card games. To get our movie fix, we broke out the Jaws board game, The Godfather: Corleone’s Empire and some of the newest Marvel-themed board games. We also added a couple of movie-themed card games to the mix with Marvel Fluxx and Jumanji Fluxx from Looney Labs. We’ve shared overviews of Holiday Fluxx, Star Trek Fluxx and even Deep Space Nine Fluxx. The game is essentially the same across all of these. So you may ask yourself why buy another theme? Because they aren’t exactly the same. Aside from the unique graphics, there are other differences that make no two packs of Fluxx the same. Instead of going over the rules for how to play, I decided to share some specifics about the Jumanji and Marvel versions. 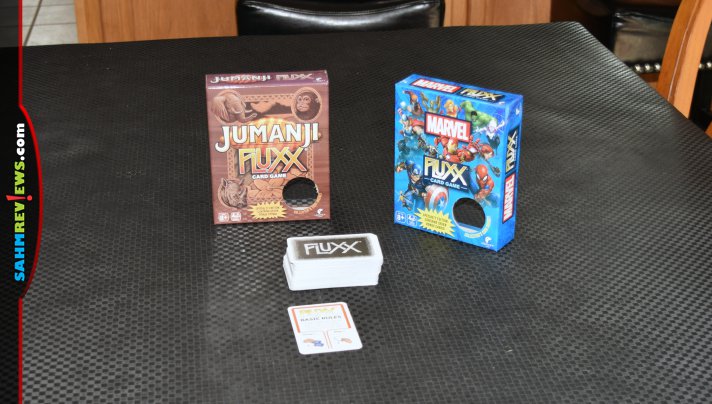 Setup is the same for all versions of Fluxx. Place the Basic Rules card in the center of the table, shuffle the deck and deal three cards to each player. Create a draw pile in the center of the table. If not everyone can reach it because you have too many players, feel free to create multiple draw piles around the table. Just don’t forget to deplete all of those before reshuffling. 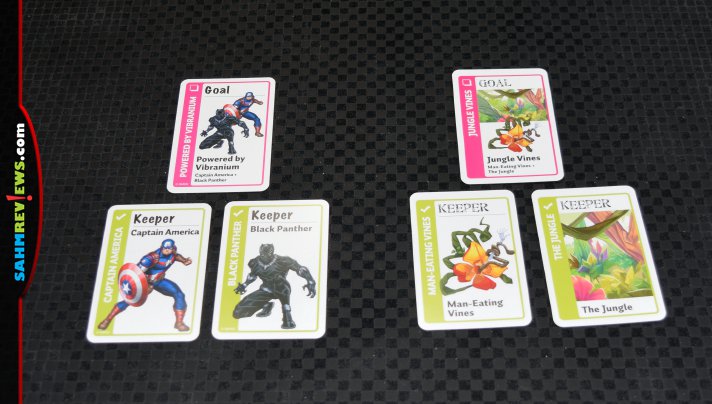 The basis of the game is to collect Keepers that match the current goal. If you’re into Marvel, trying to acquire Captain America and Black Panther to win is pretty exciting. If you’re more of a Jumanji person then you may think Man Eating Vines and The Jungle are the coolest keepers to get your hands on.

Neither of these two sets include Creepers, although Jumanji does include Danger cards. While Creepers prevent players from claiming victory (in other sets), Danger cards completely eliminate players from the round. A player impacted by a Danger card discards their entire hand and all their keepers and must wait until all players have completed a turn before jumping back into the game. 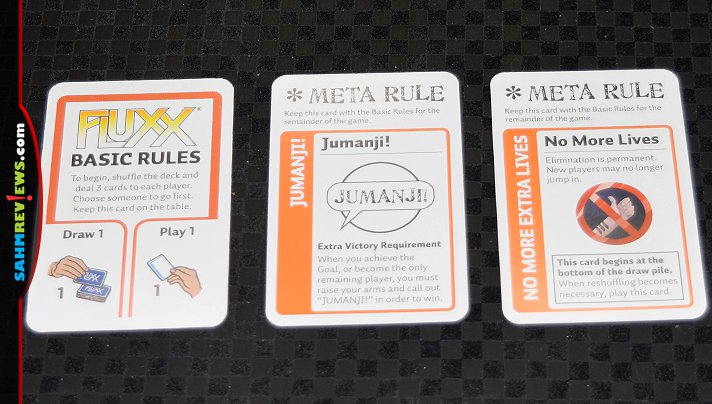 Jumanji Fluxx also includes Meta Rules which stay in place for the entire game. All of the games have rules that amend the Basic Rule, but there are other rules that wipe them out. Meta Rules cannot be removed once they are in play.

Regardless of which version of Fluxx strikes your interest, it’s worth having at least one or two of these affordable card games in your game library. It’s an easy to learn card game and the variety of thematic options is awesome. I encourage you to visit Looney Labs’ website and social channels (Facebook and Twitter) for announcements about new licenses including the recent release of SpongeBob Fluxx. If you are planning a movie-themed game night and need a couple to add to your schedule, pick up Marvel Fluxx and Jumanji Fluxx on Amazon or check with your local game store for availability.

Which franchise do you prefer: Marvel or Jumanji?